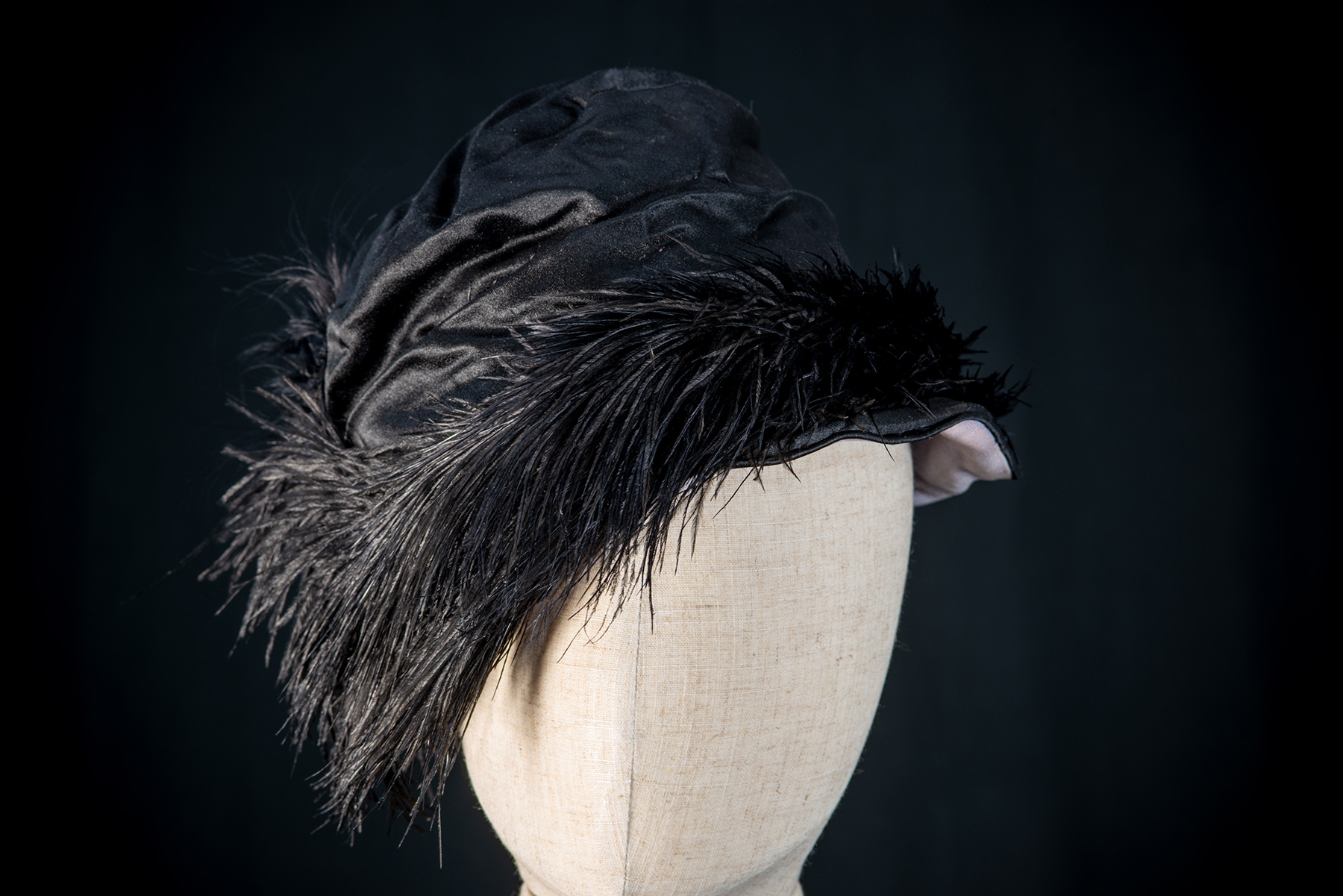 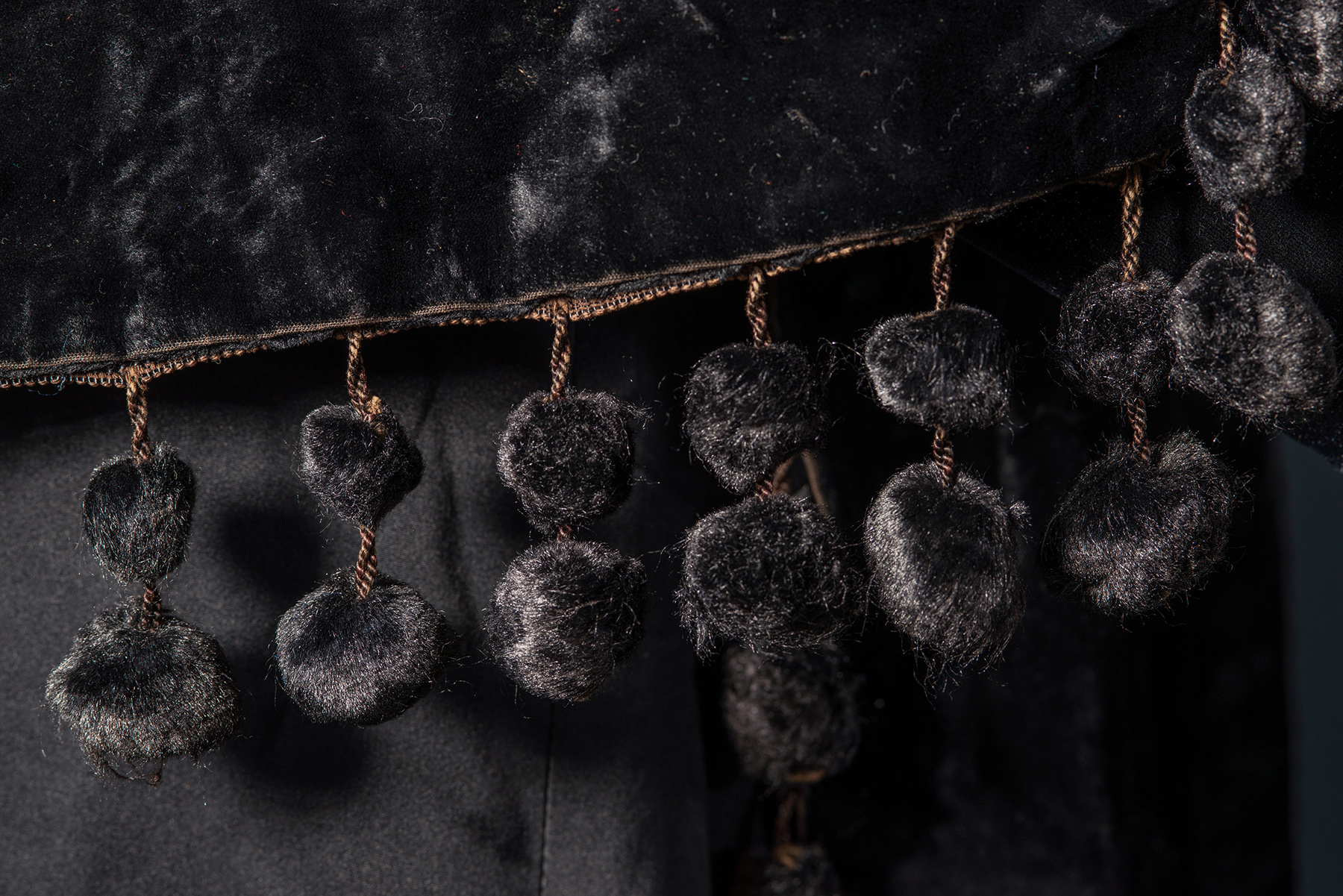 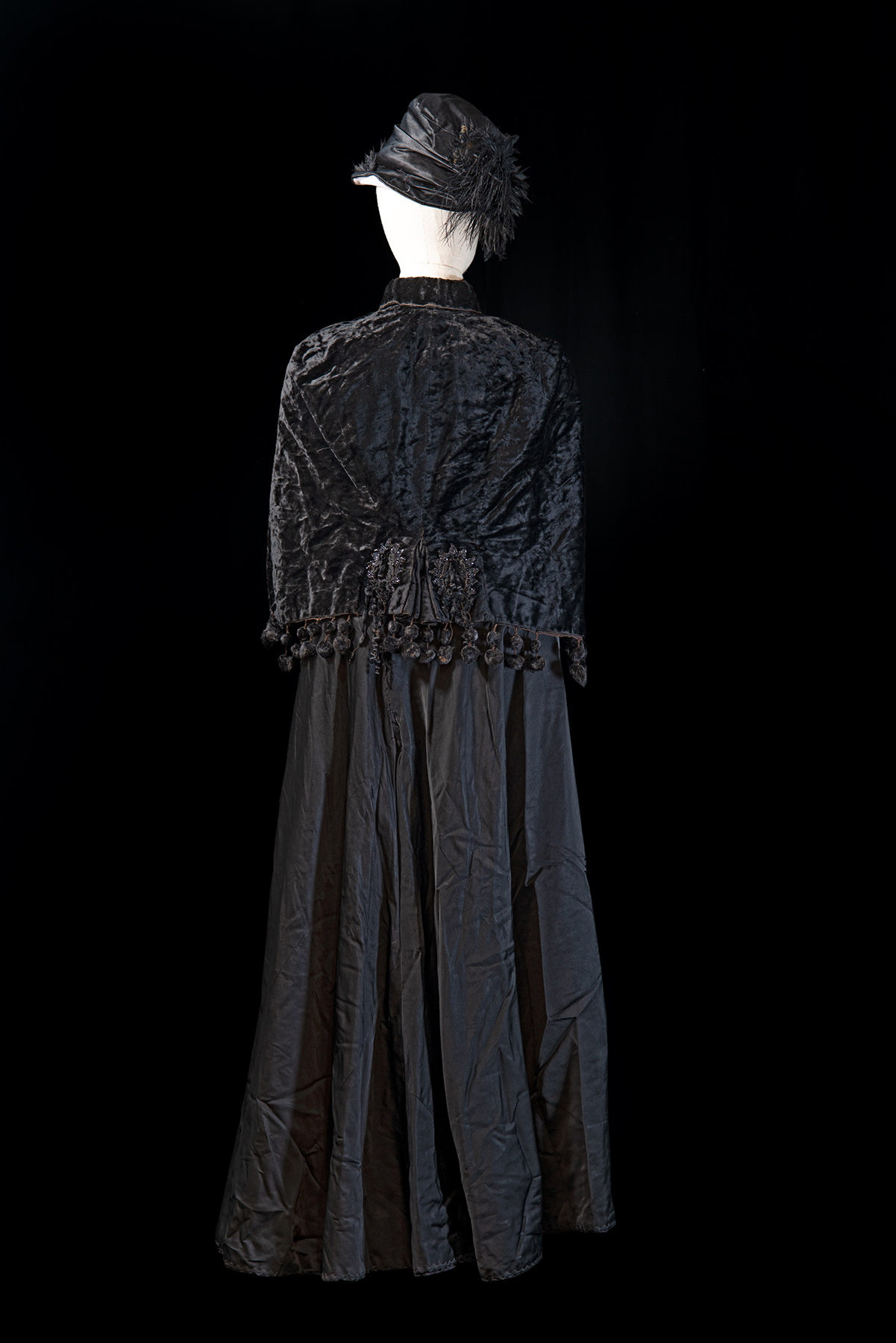 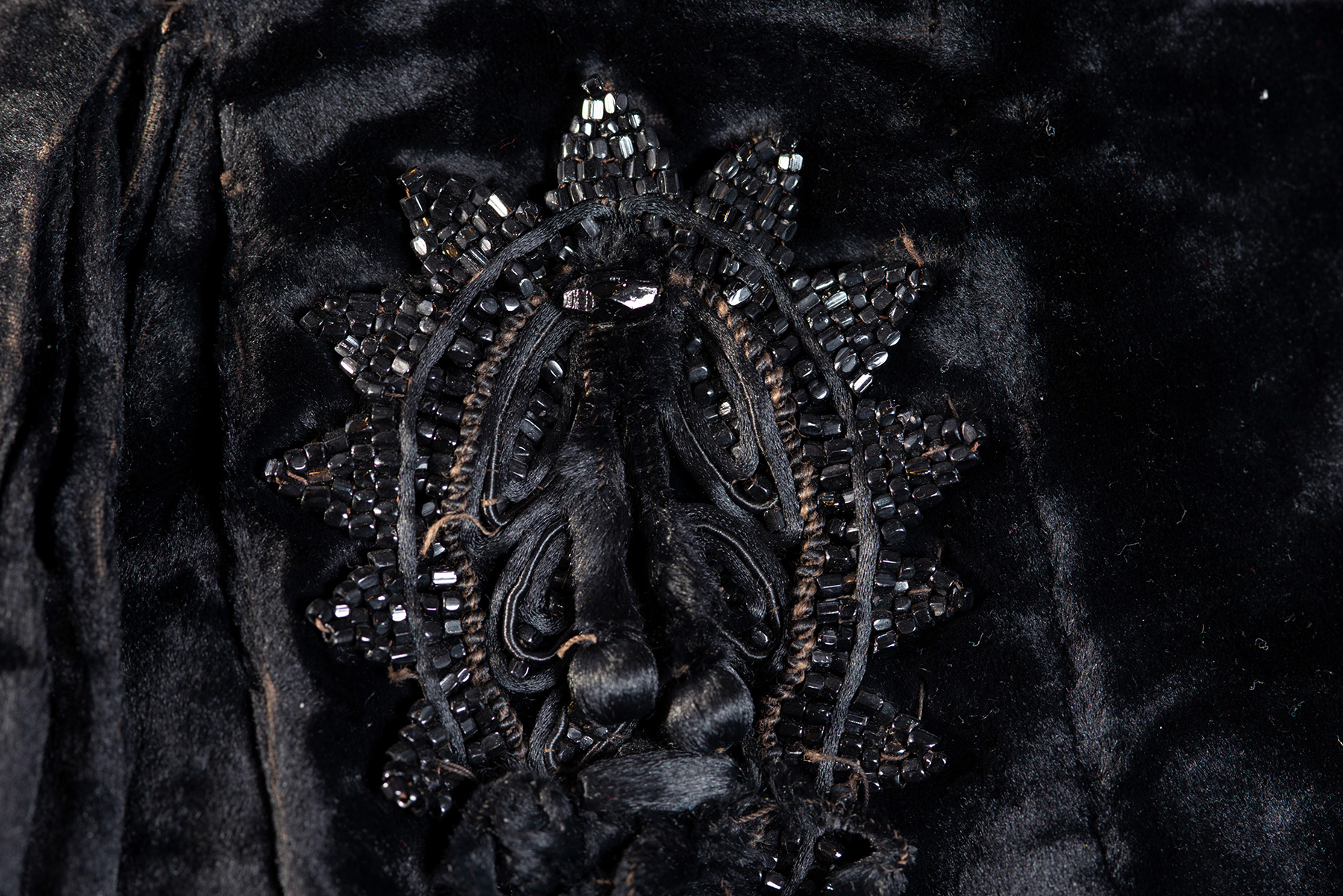 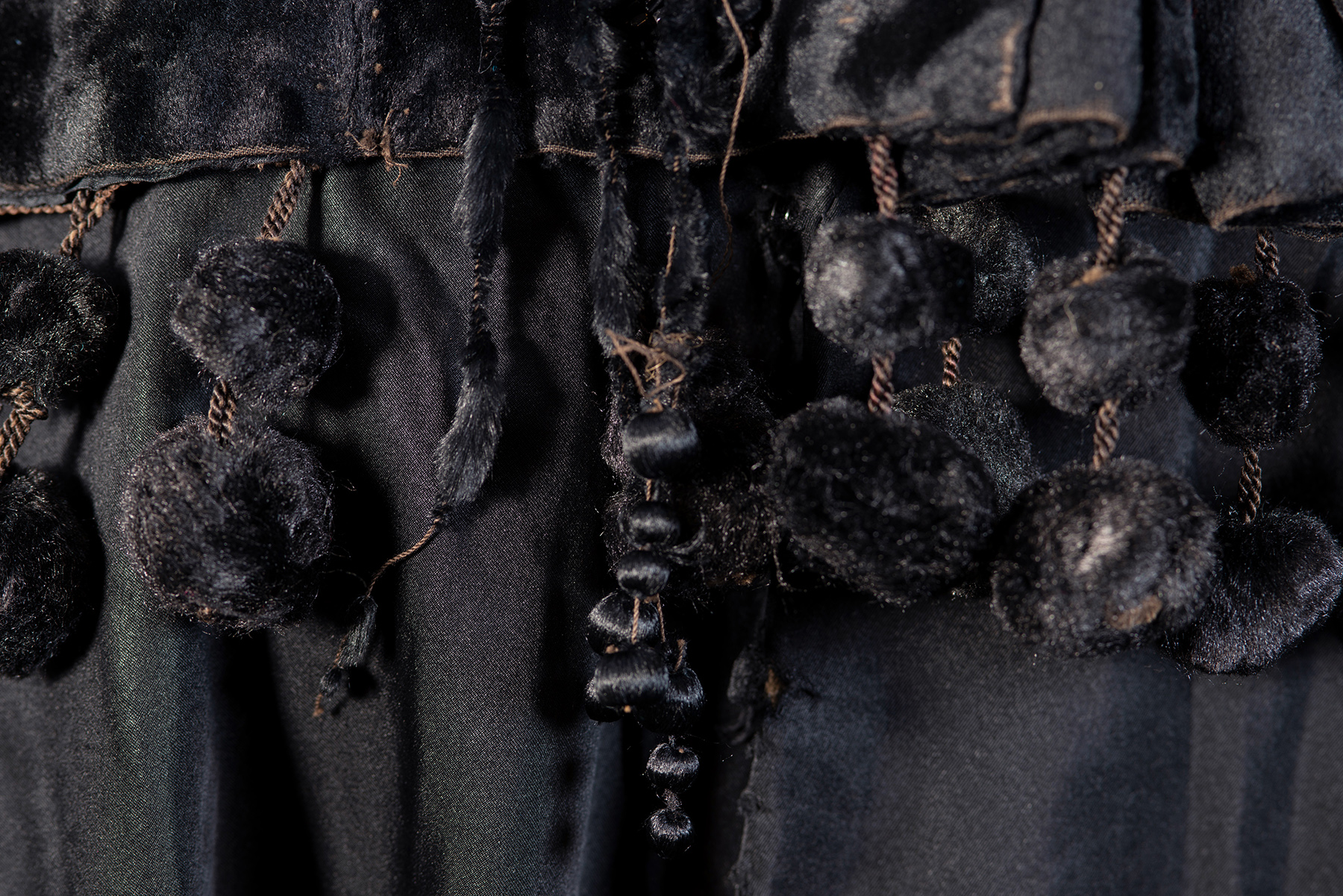 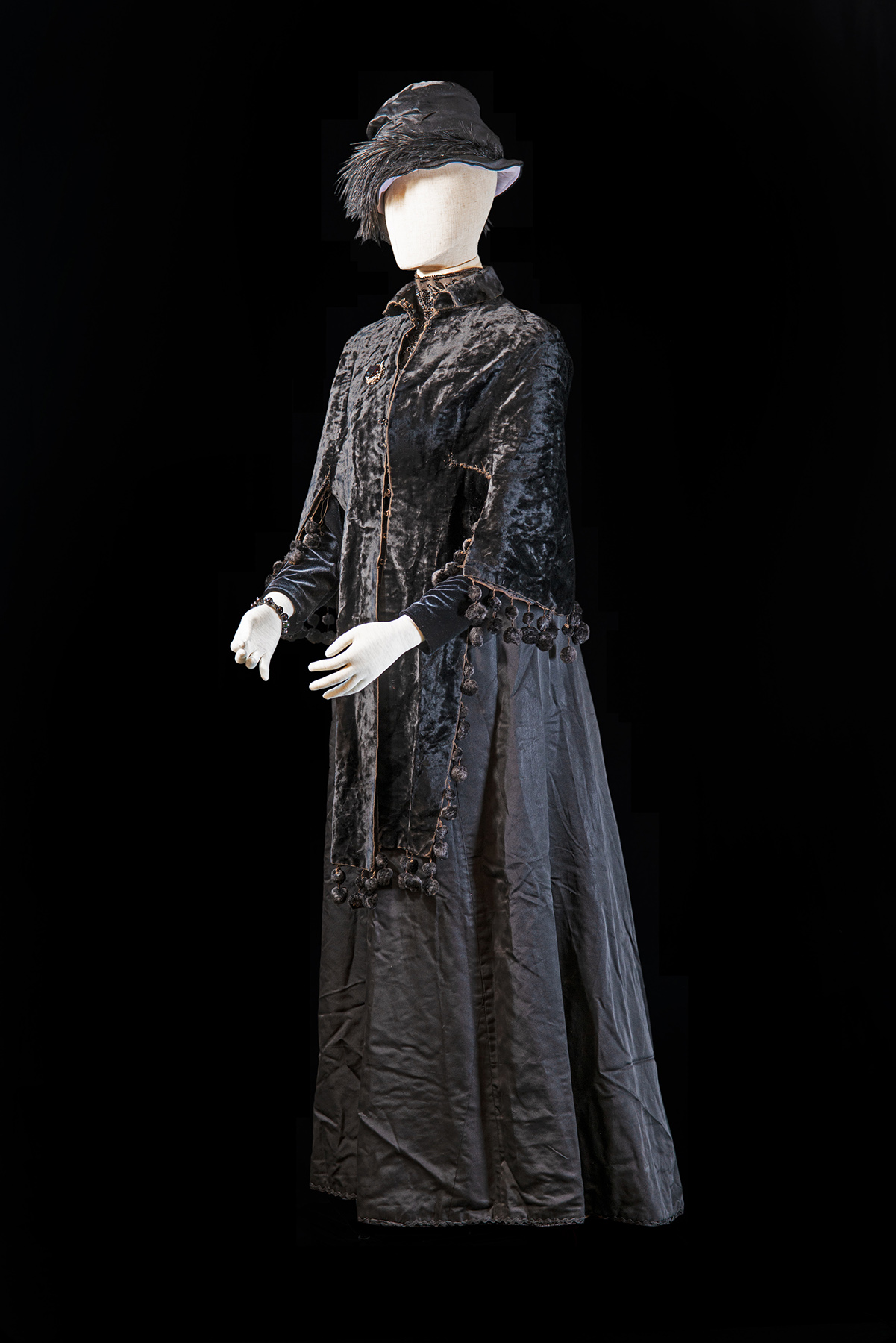 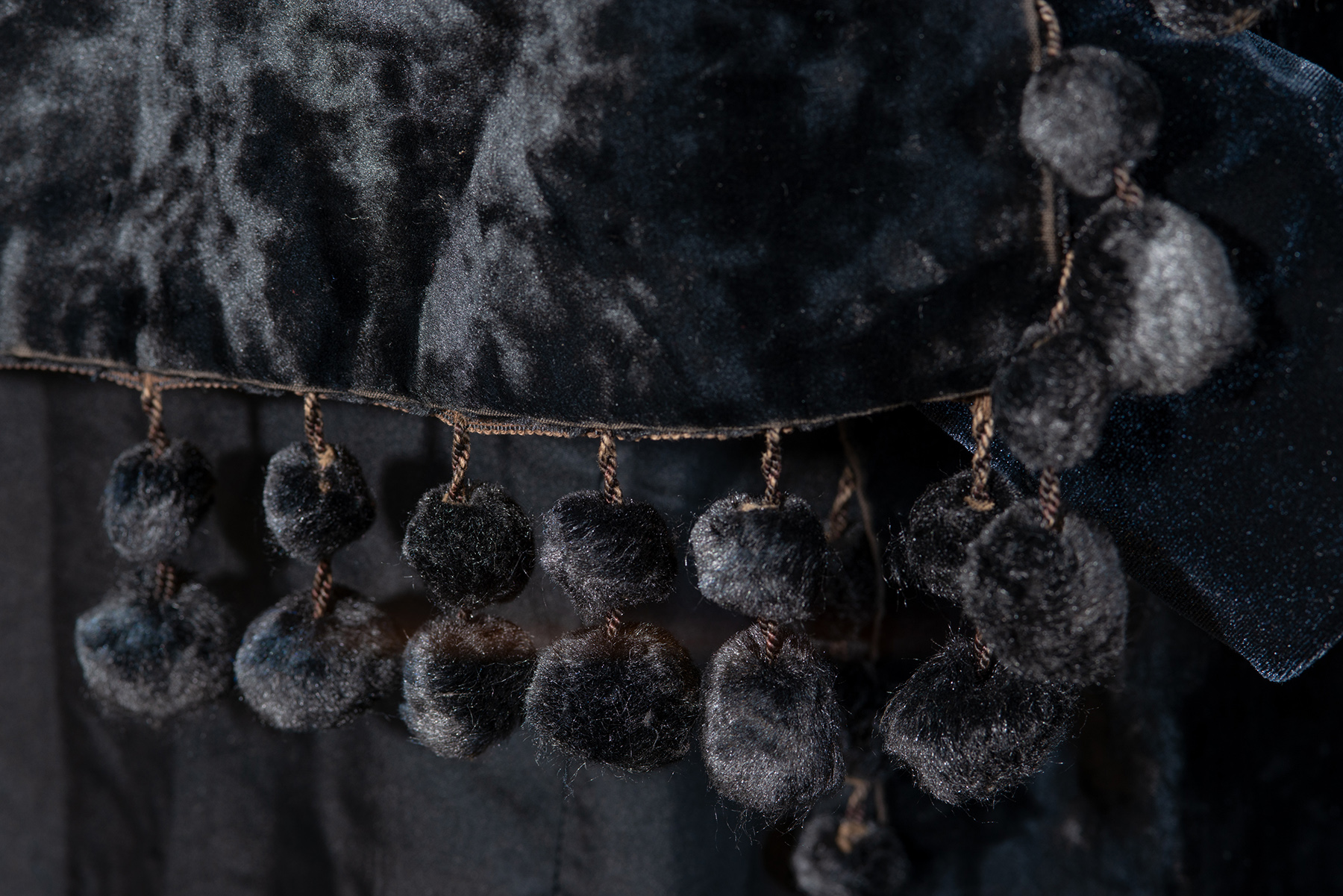 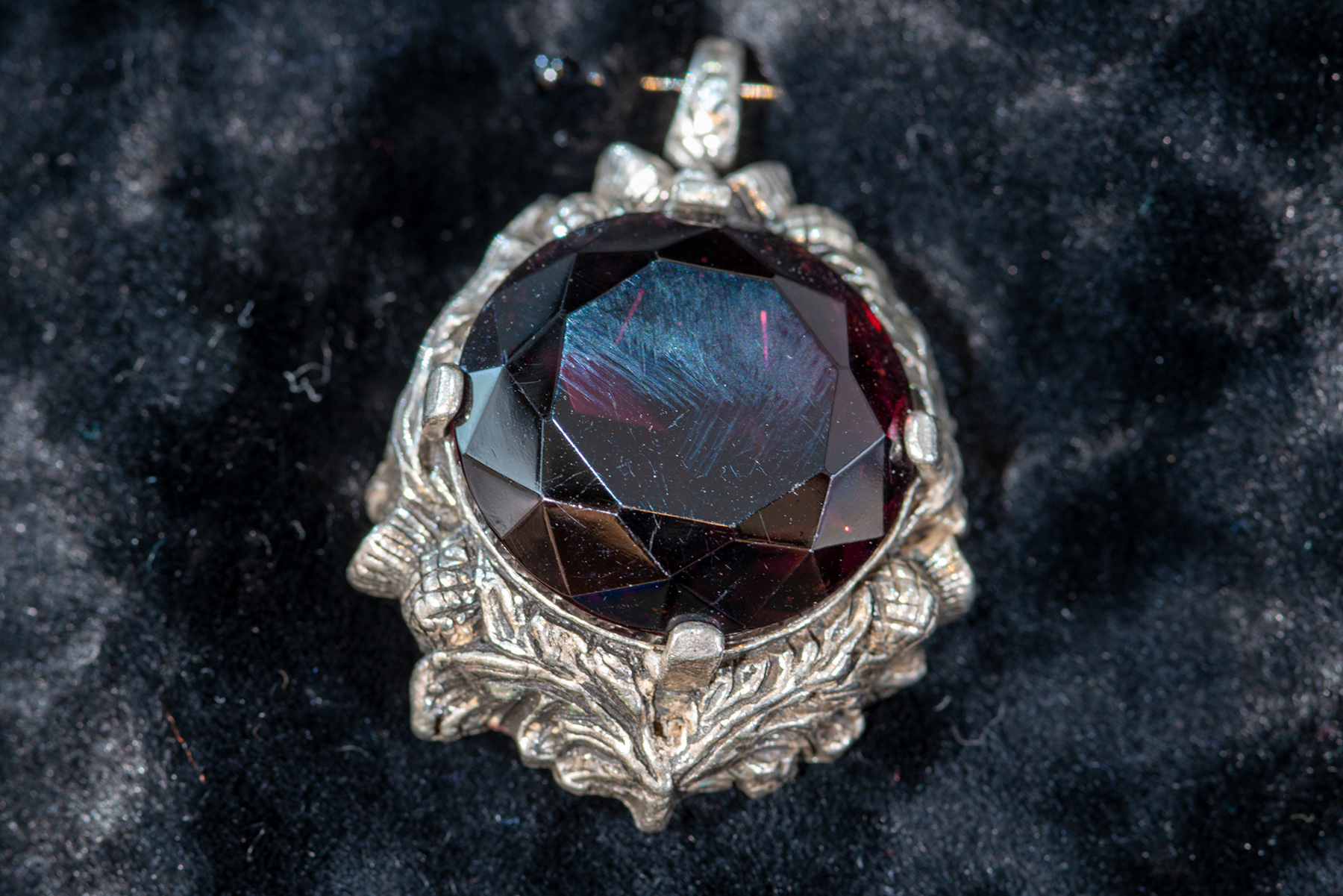 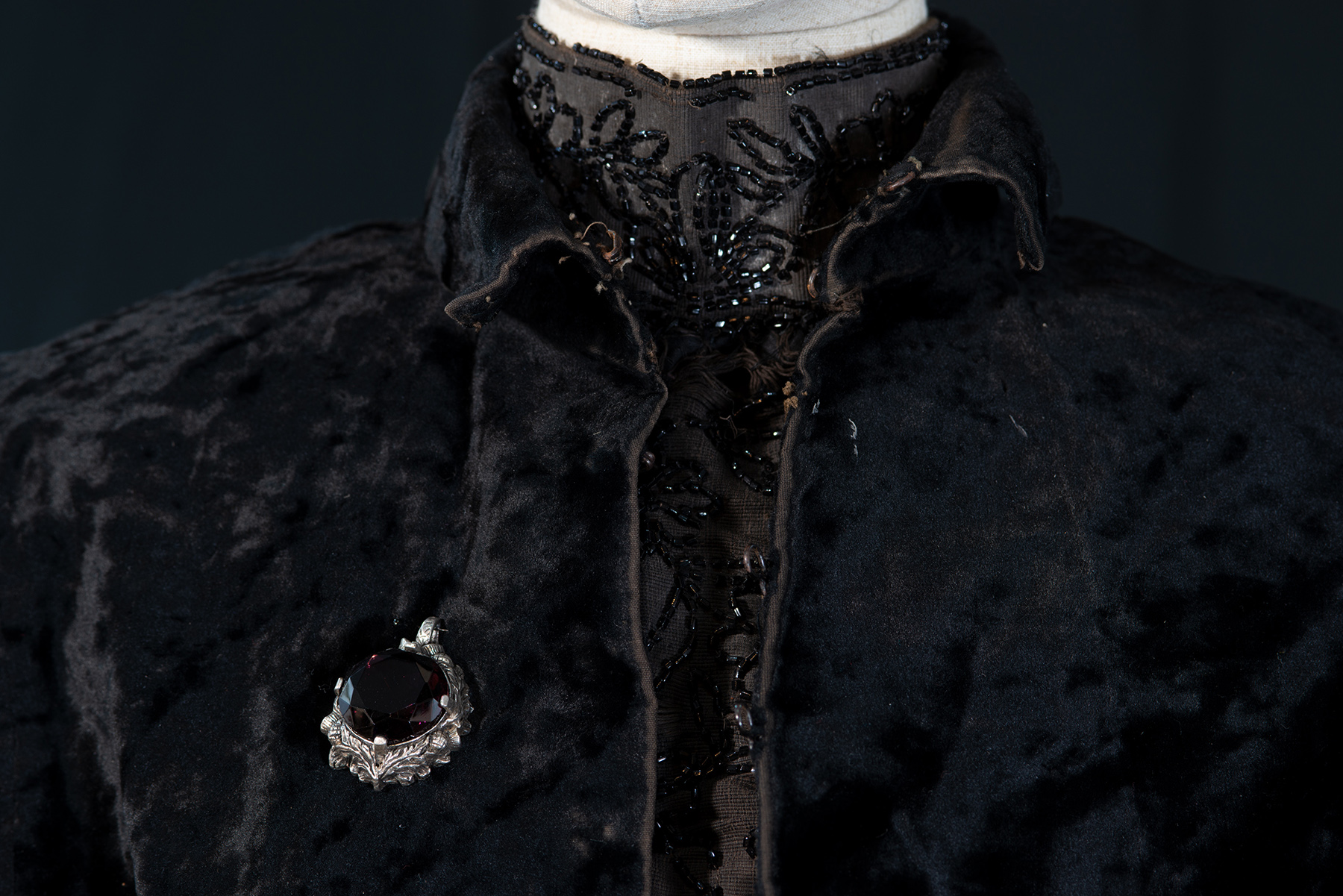 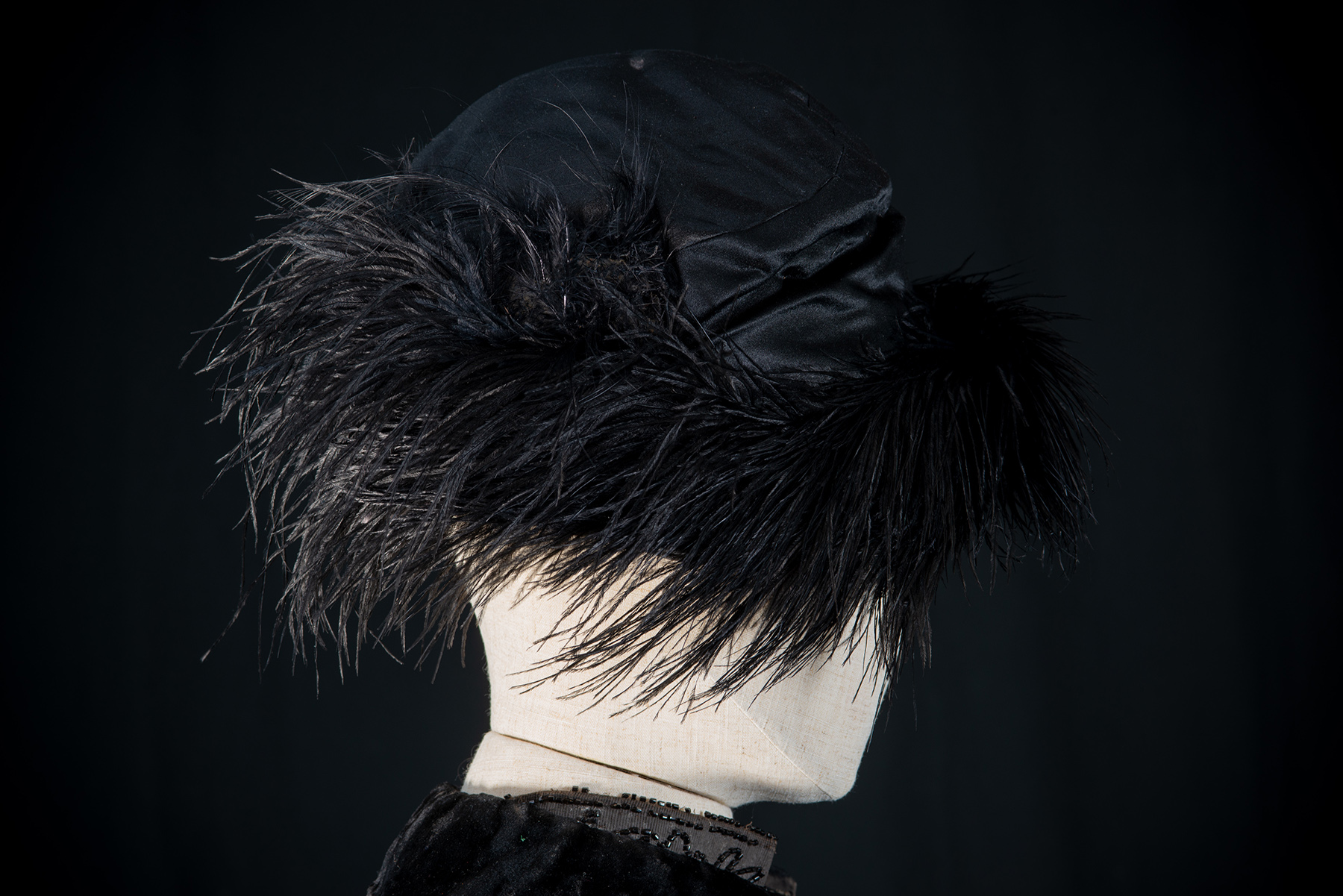 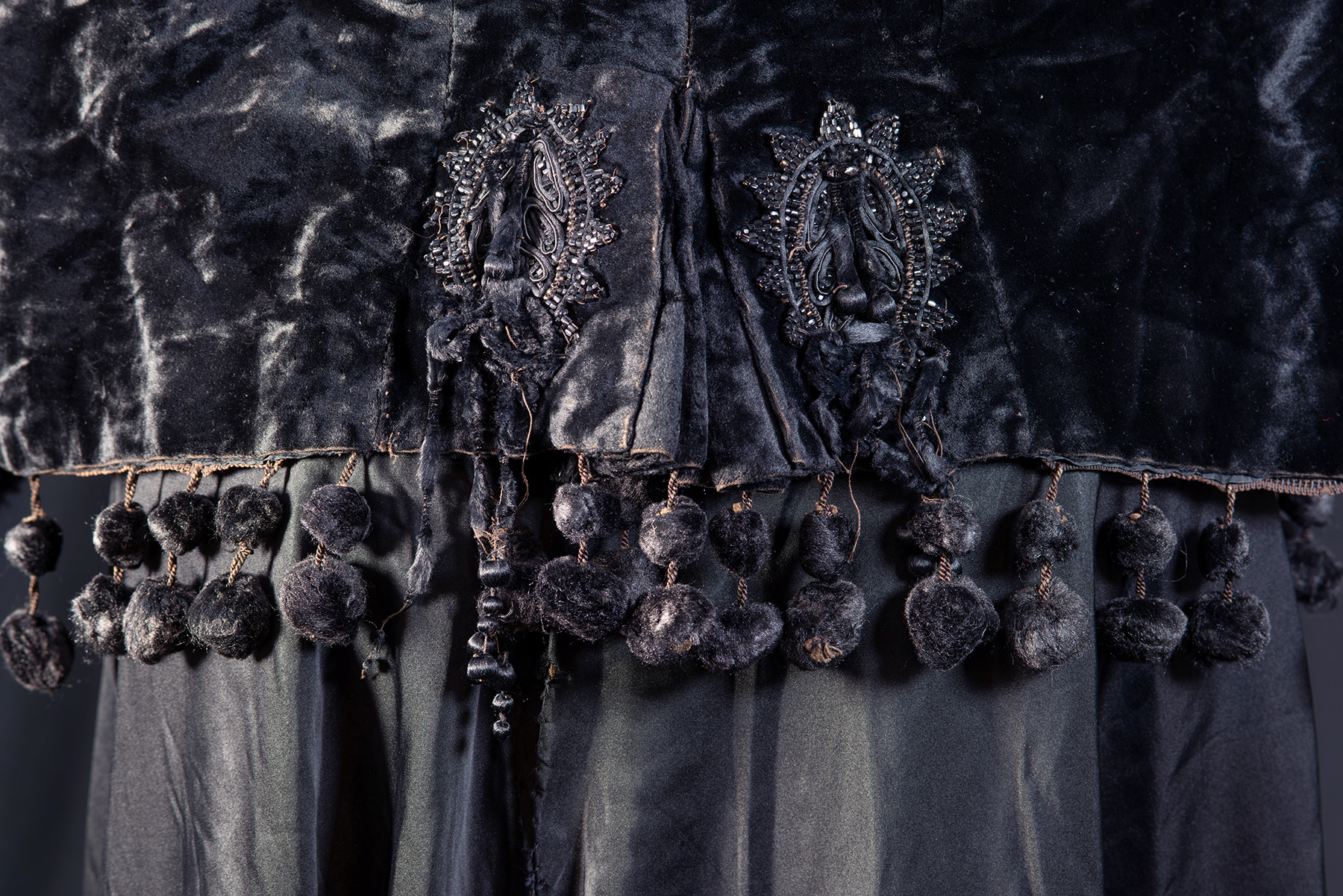 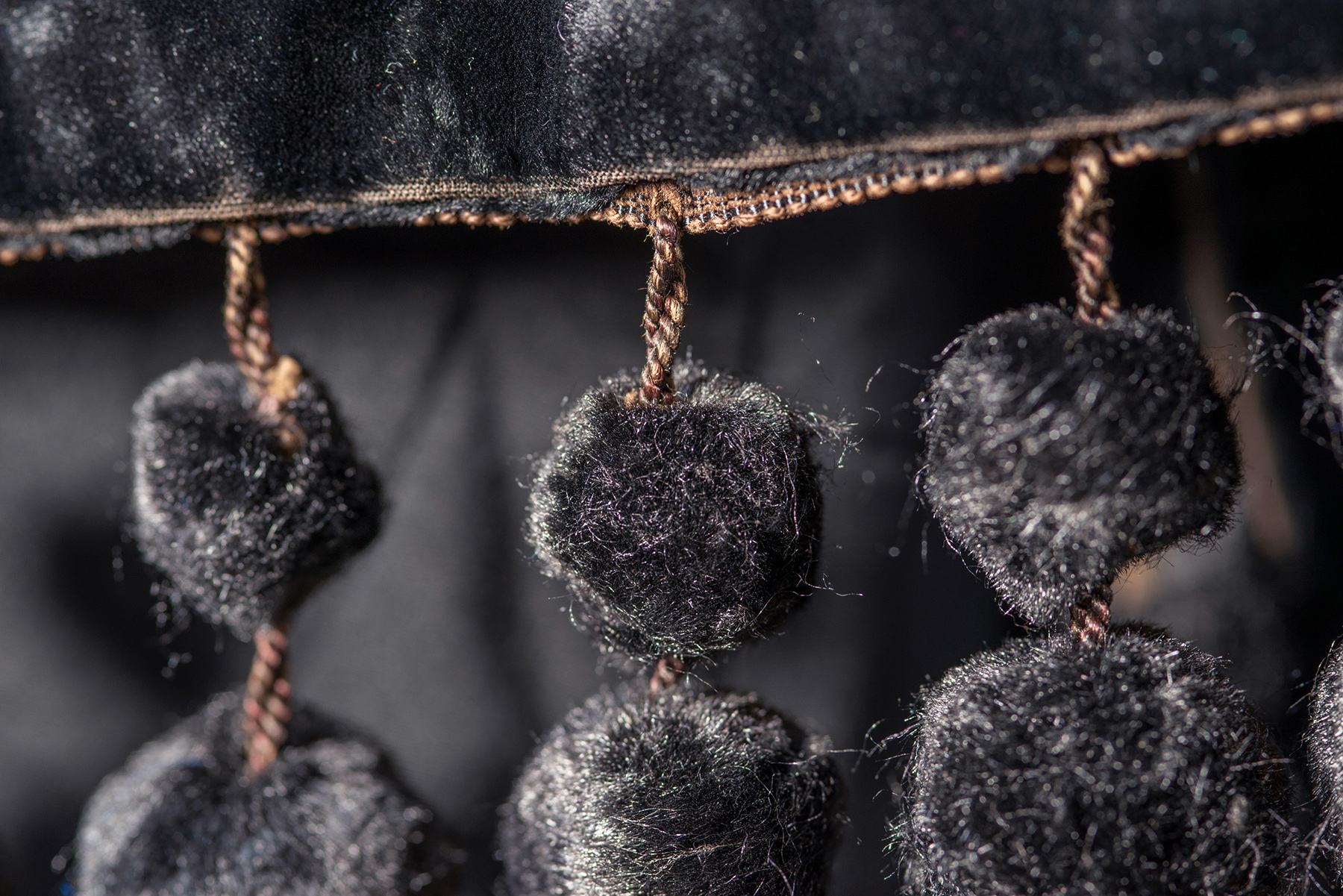 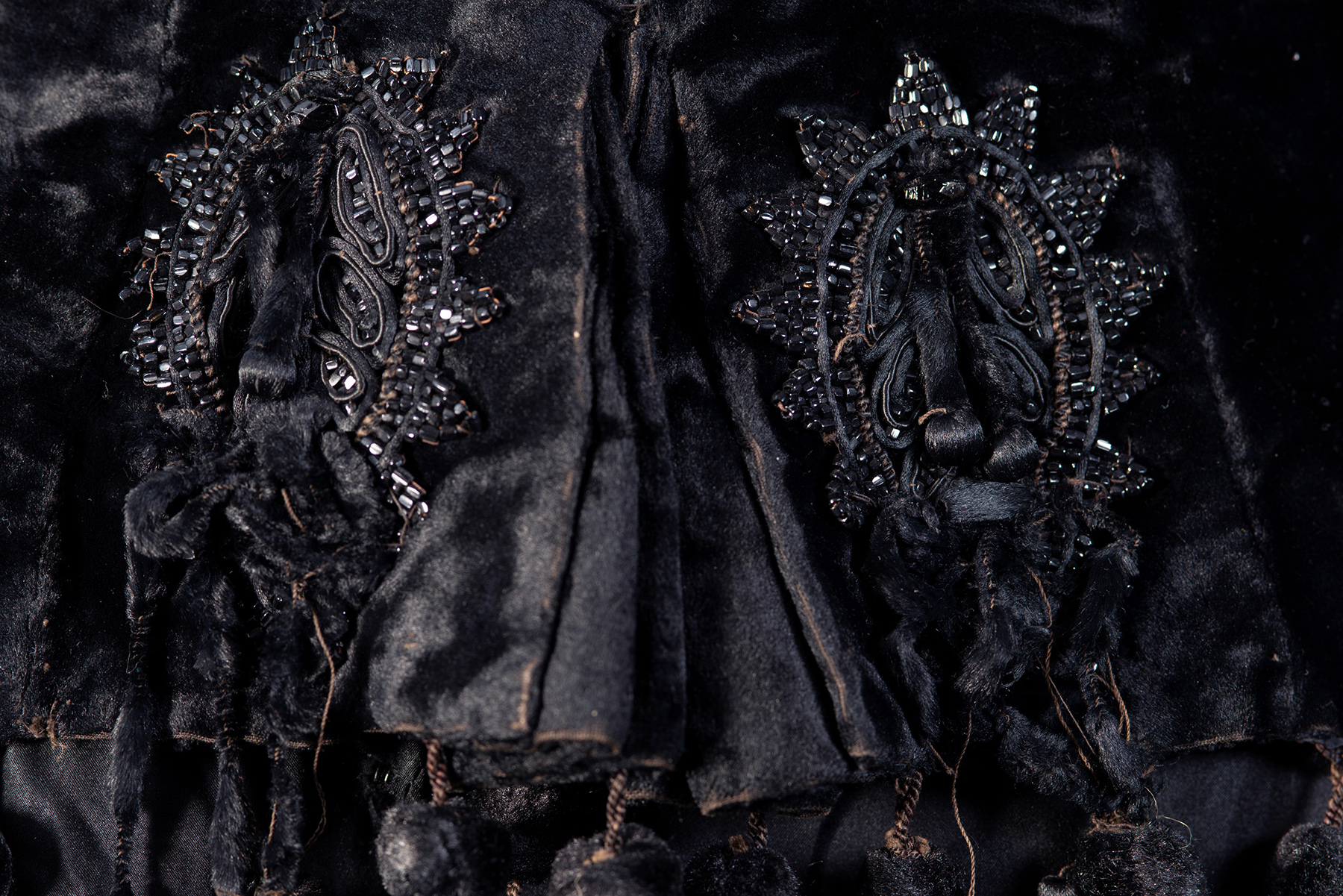 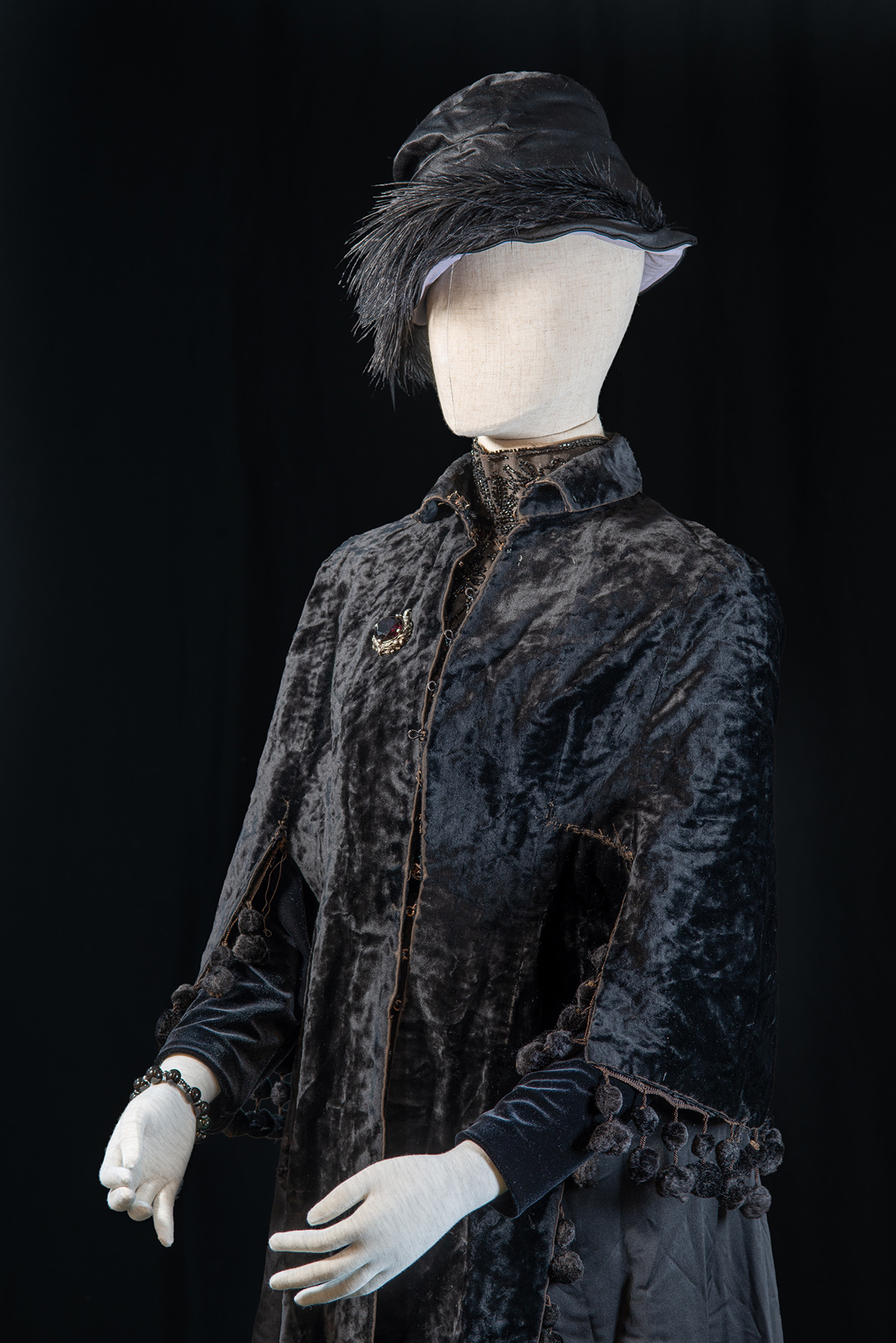 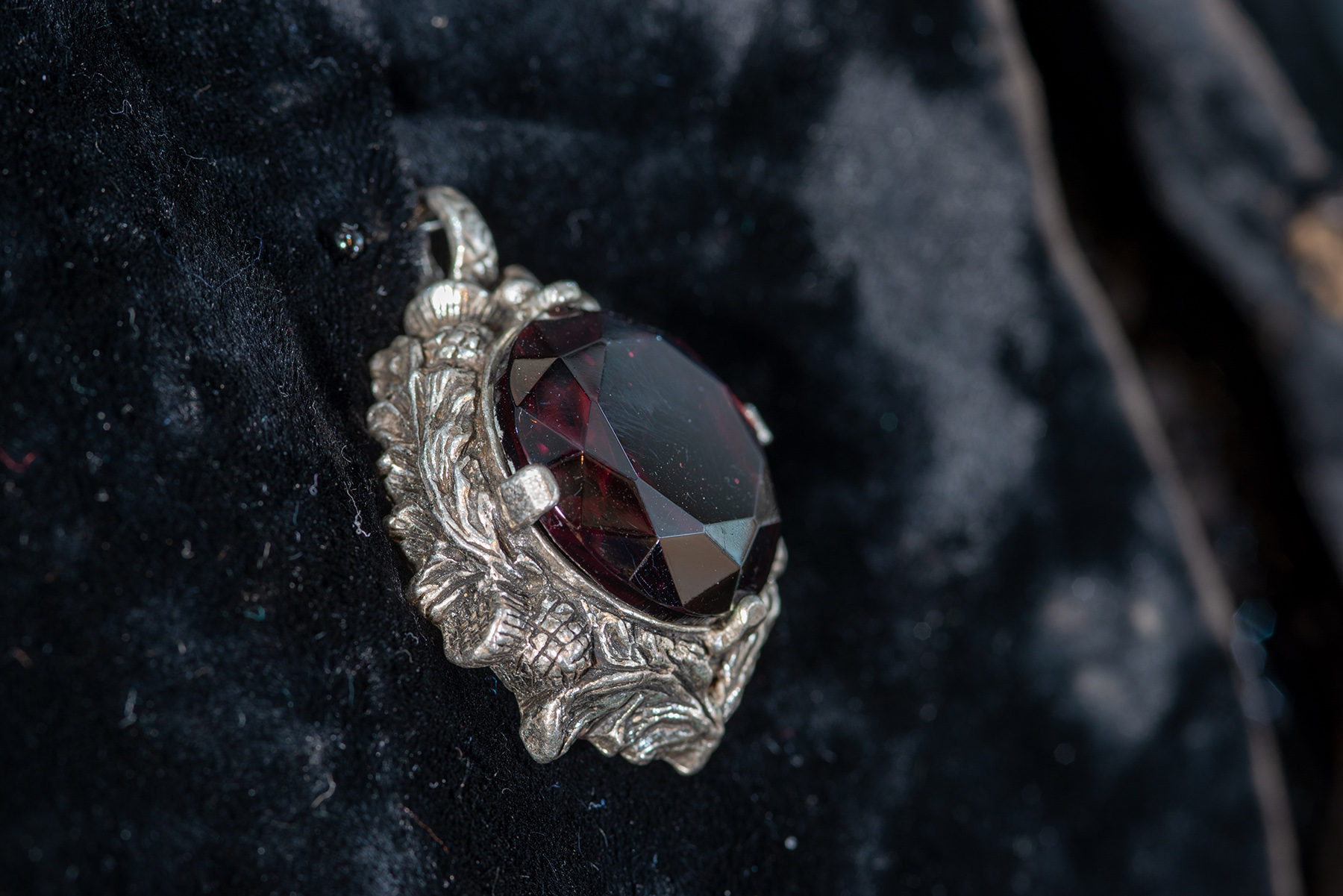 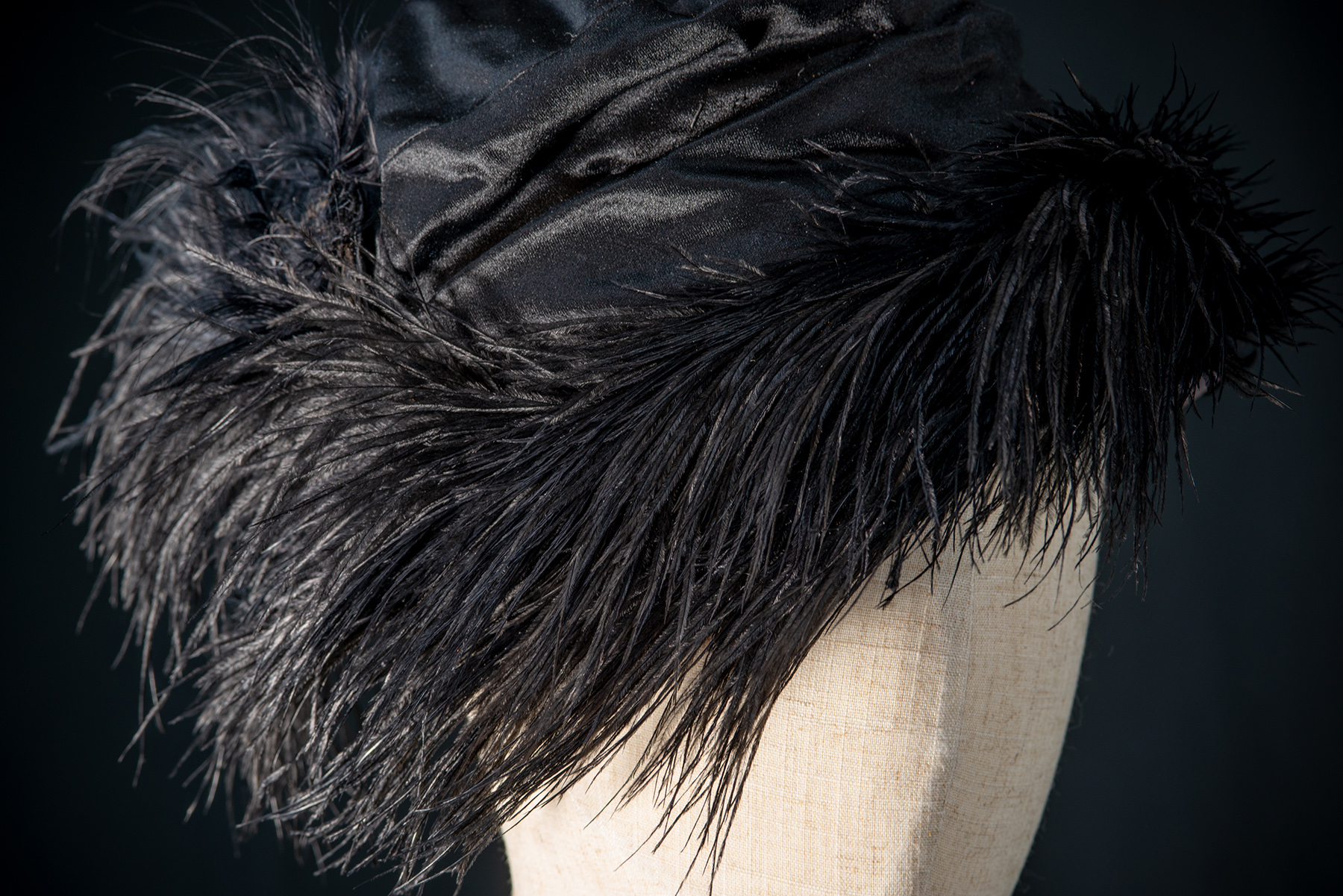 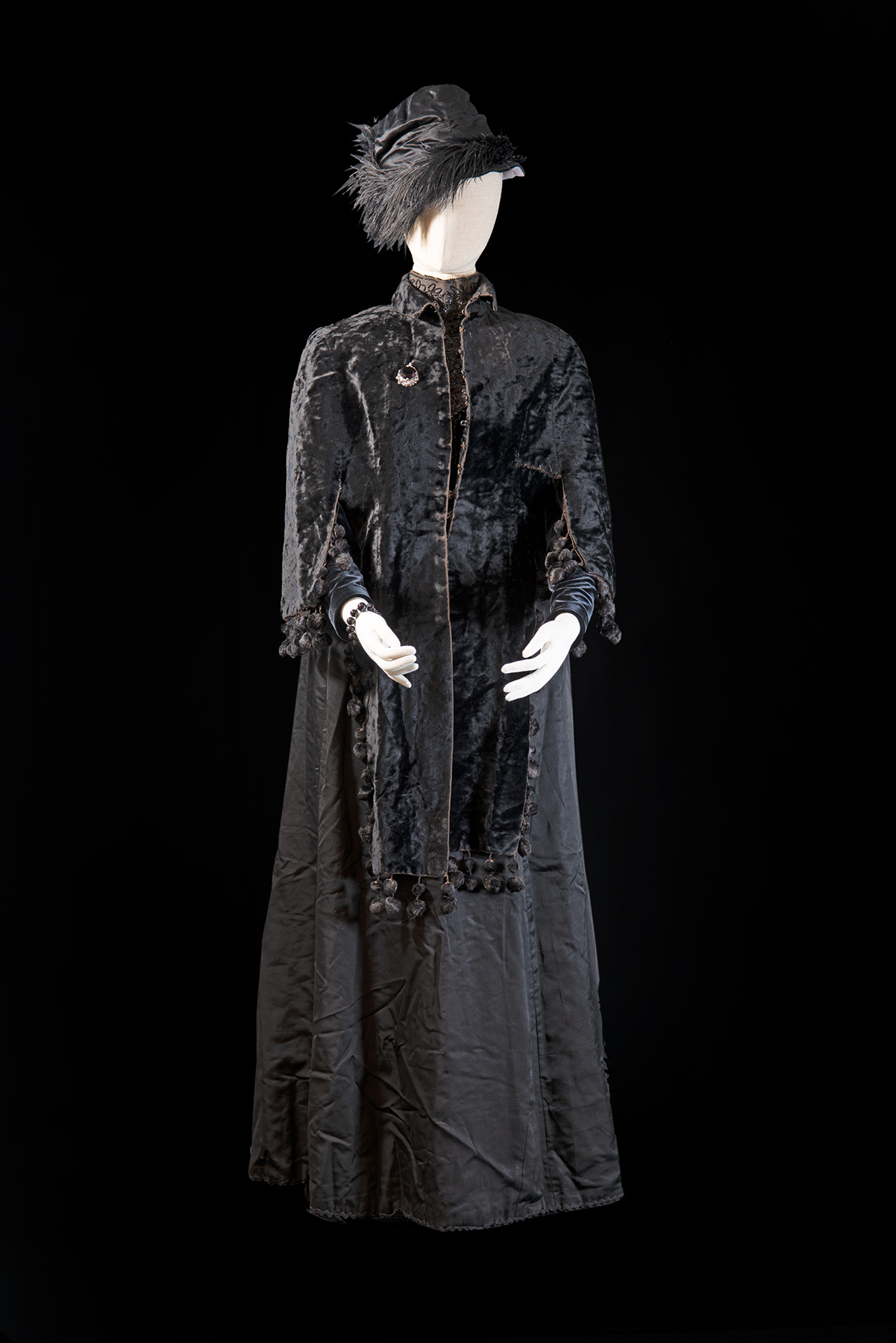 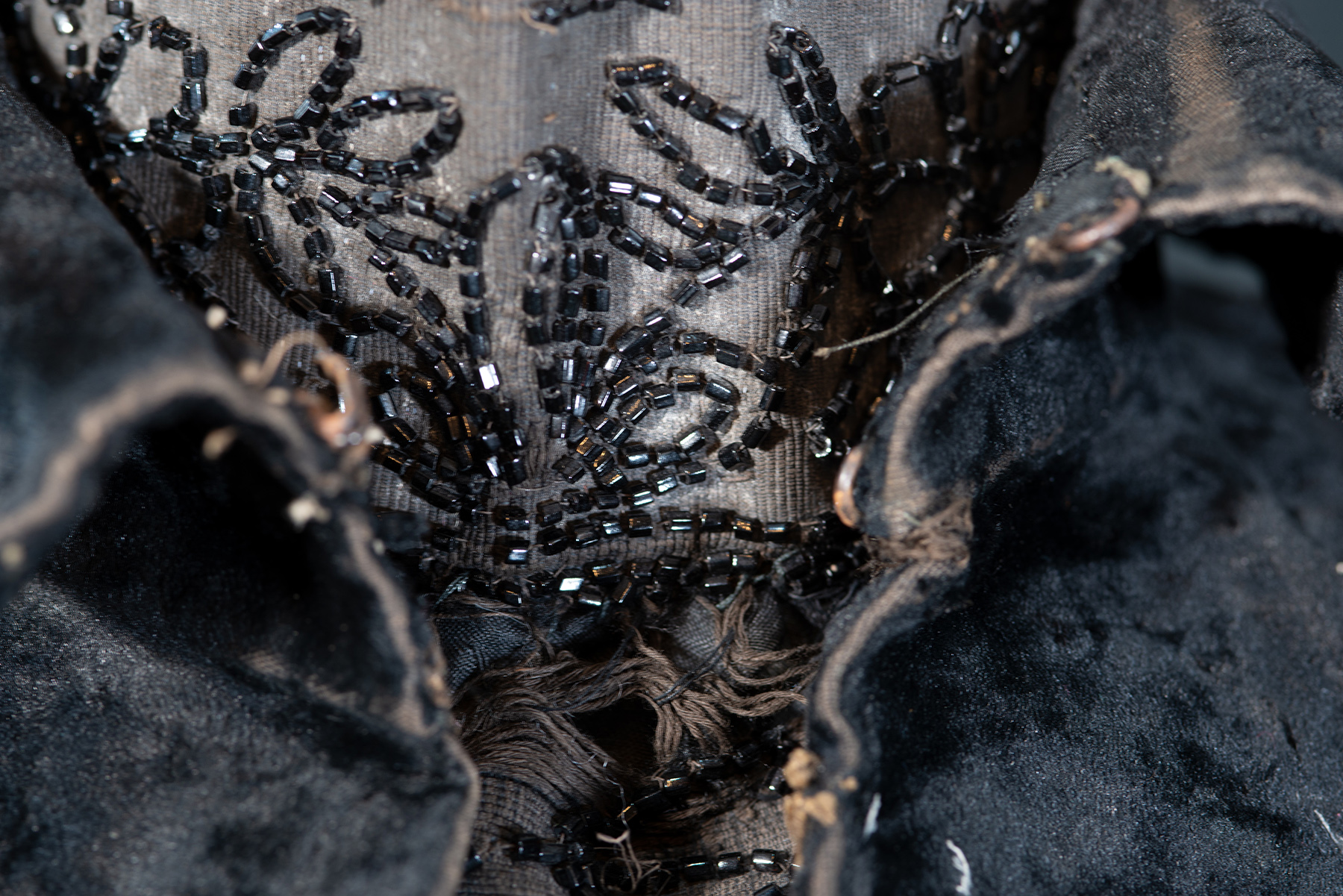 This mourning outfit dates from the turn of the twentieth century and was lovingly passed down from mother to daughter over four generations. The earliest wearer is believed to be Mrs Elizabeth Taylor (née Macpherson) who was widowed in 1912. Her husband James Taylor was a crofter and farmed at Buldoo in Reay, Caithness. The outfit represents a time when the approach to death, funerals and widowhood were vastly different from attitudes today.

This costume is on display and the museum will open in June. Visit our website for more details and to plan your Highland Threads tour!

The outfit consists of an elegant black velvet cape which is fitted at the back and has two long front panels and a stand-up collar. The double pompom fringing was a popular Victorian embellishment. Its stylish design and ornate beading suggest that it would have been a considerable investment, especially for a humble farming family.

Strict etiquettes around death and mourning existed at this period. Only men were invited to attend funerals and black rimmed invitations were sent in similarly marked envelopes. Black clothes were worn in public, and many widows continued to wear black for the rest of their lives. Some eventually introduced a hint of grey or purple and the hidden secret in this garment is the bright purple silk lining of the sombre black skirt.

Mrs Taylor’s period of mourning included the death of one of her four grandsons. All four of her grandsons emigrated to Canada to work on the construction of the Canadian Pacific Railway, completed in 1885. Grandson James died of typhoid after drinking contaminated water. The local Canadian water supply was suspect, and he ignored advice to drink only beer. It is likely that the grandsons used their wages to send stylish outfits such as this one back to Caithness.

Bereavement presented a business opportunity for local suppliers, especially if a high-status family was involved. The Castletown draper David Keith had his business in the same premises as the Castletown general store, which sold everything from groceries, animal feeds and farm machinery to chocolate bars. In 1883 Lady Fanny Sinclair, daughter of the 14th Earl of Caithness, died suddenly at her family home, the Castle of Mey. David Keith was given one week to equip the entire household staff with black suits, hats, gloves and scarves. The order also included black kid gloves and white ties for family mourners. Black cloth was purchased to drape the pews in Canisbay church.

The outfit was generously donated by Mrs Lilian Manson from Thurso, Caithness.

About The Mourning Outfit

Discover the vibrant culture, inherited from Norse and Gaelic ancestors.

Help CASTLEHILL HERITAGE CENTRE work through the pandemic closures by making a DONATION.