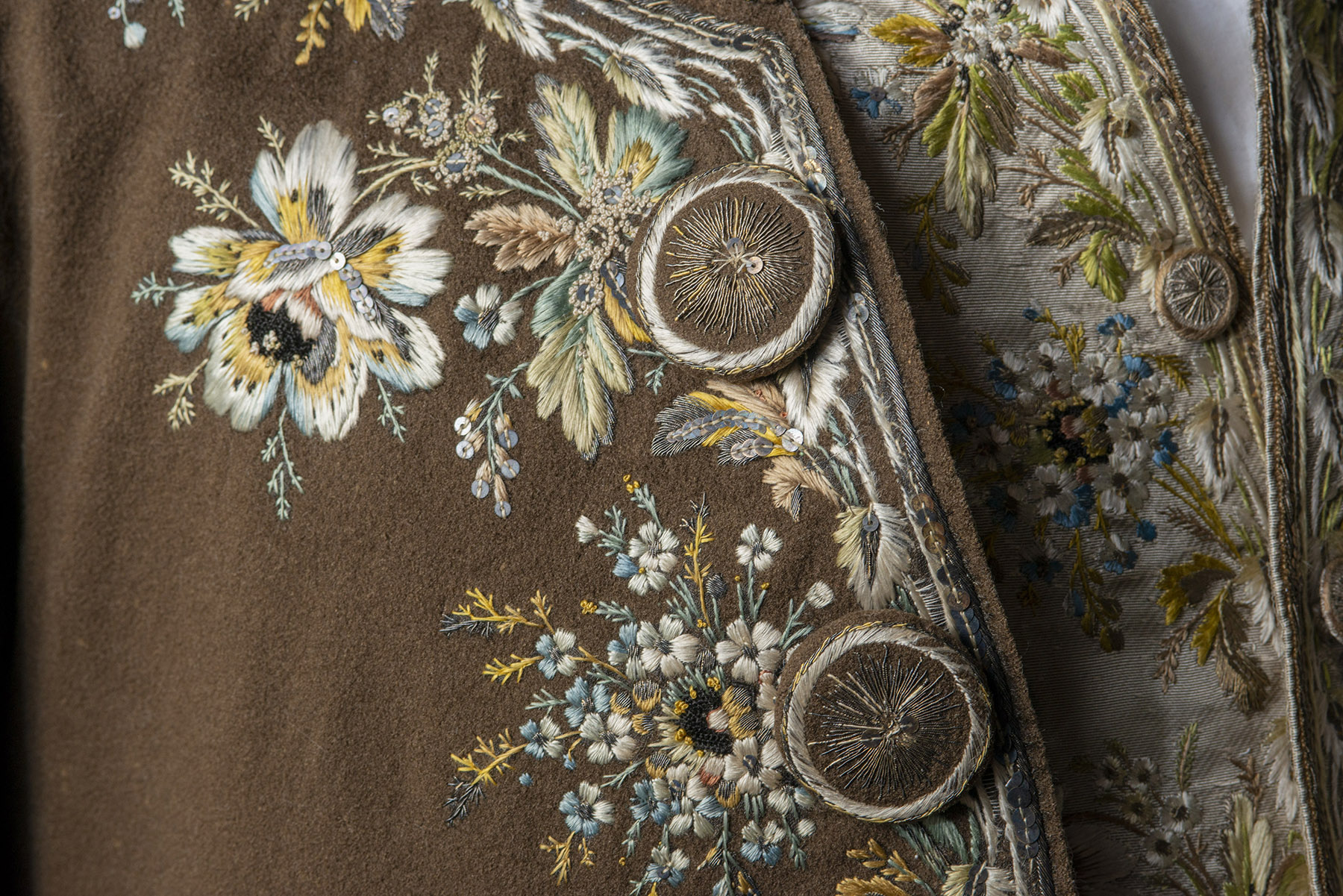 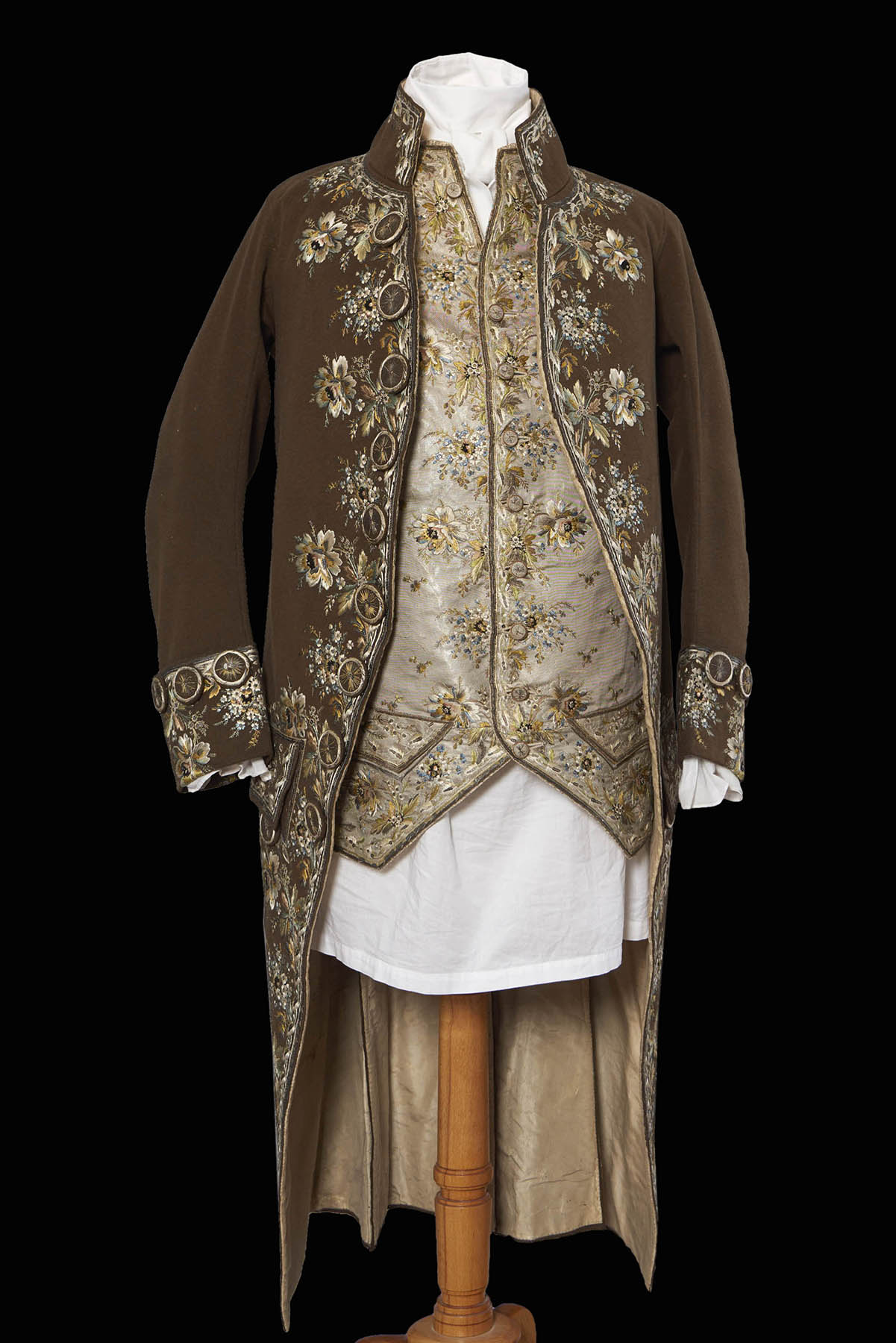 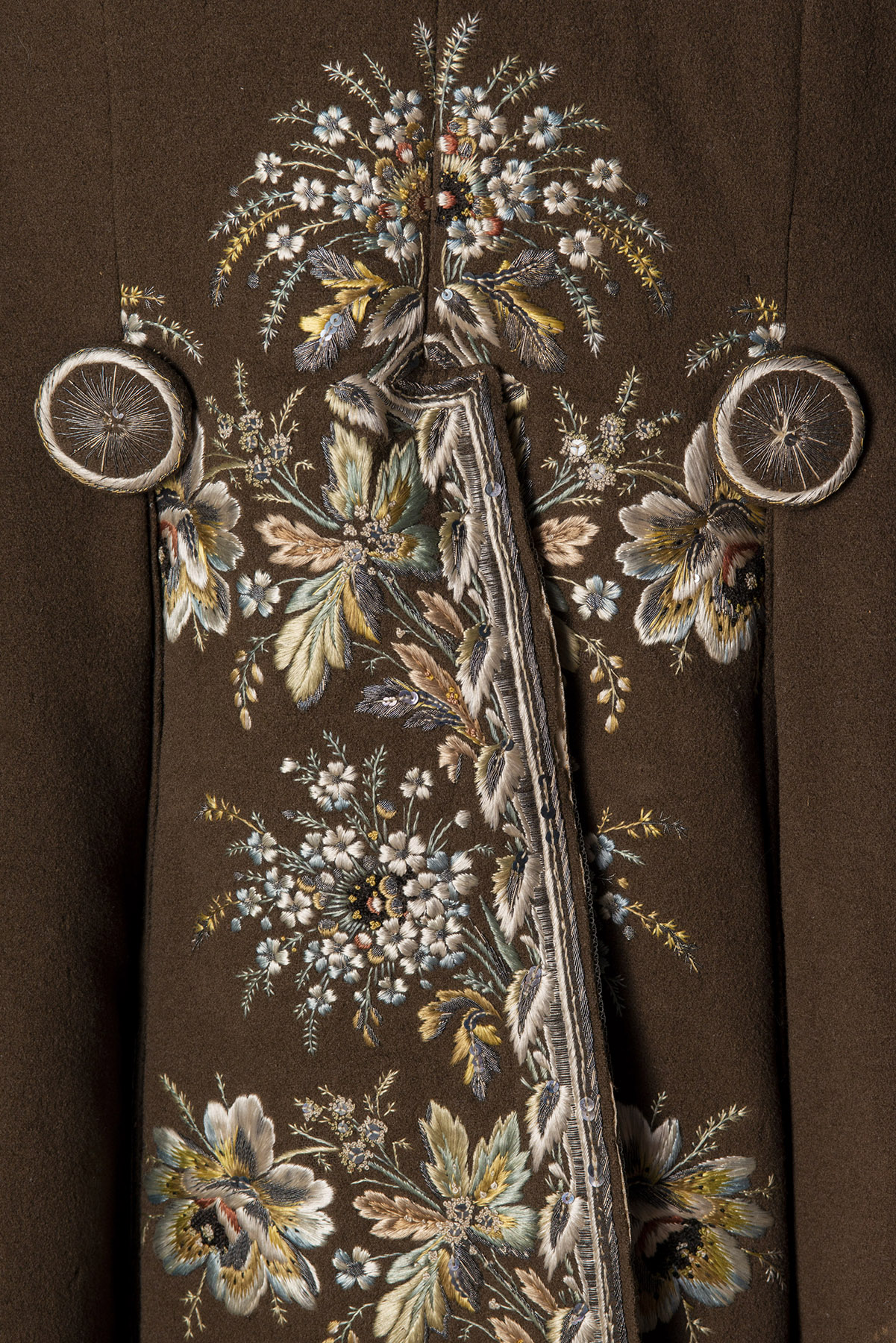 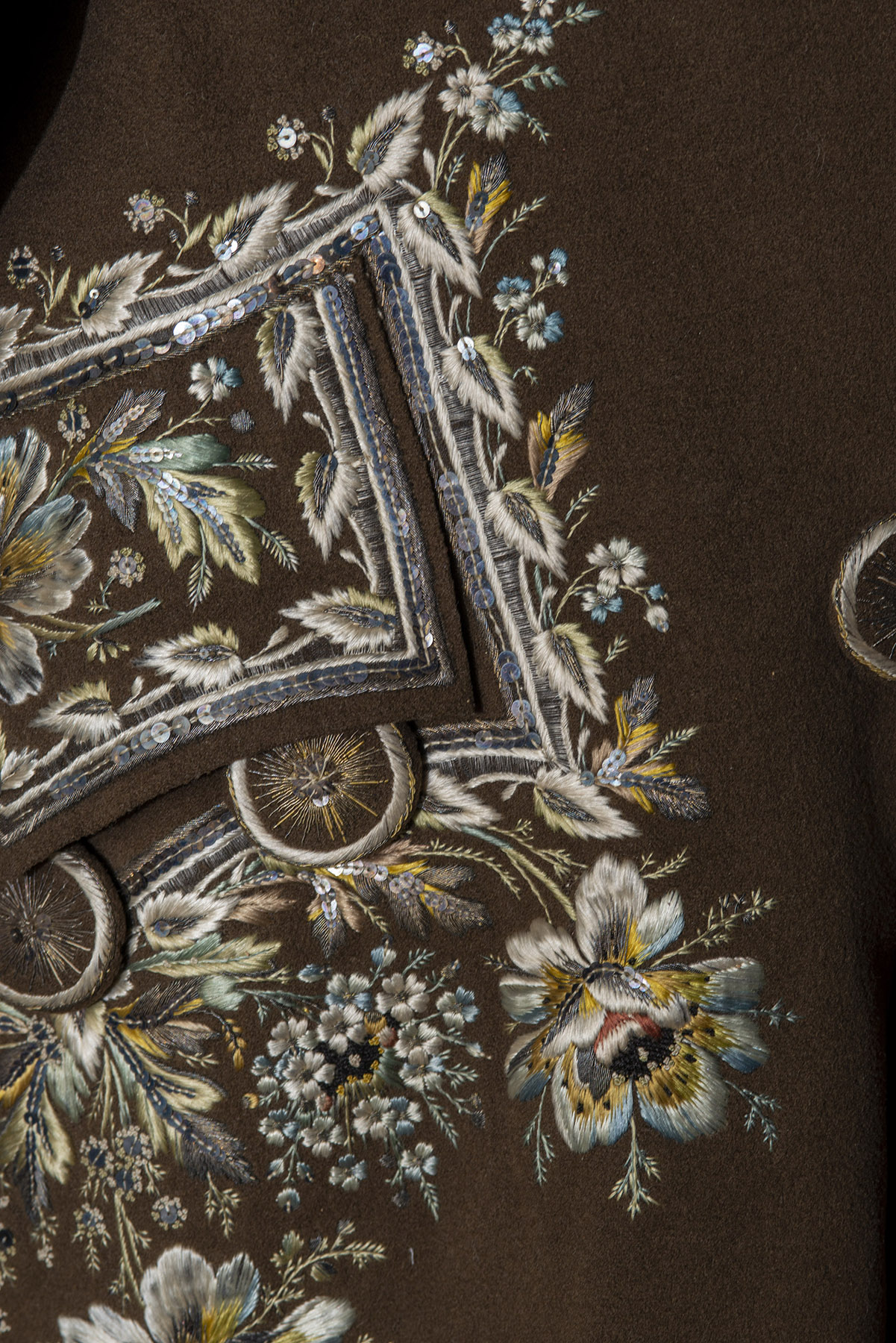 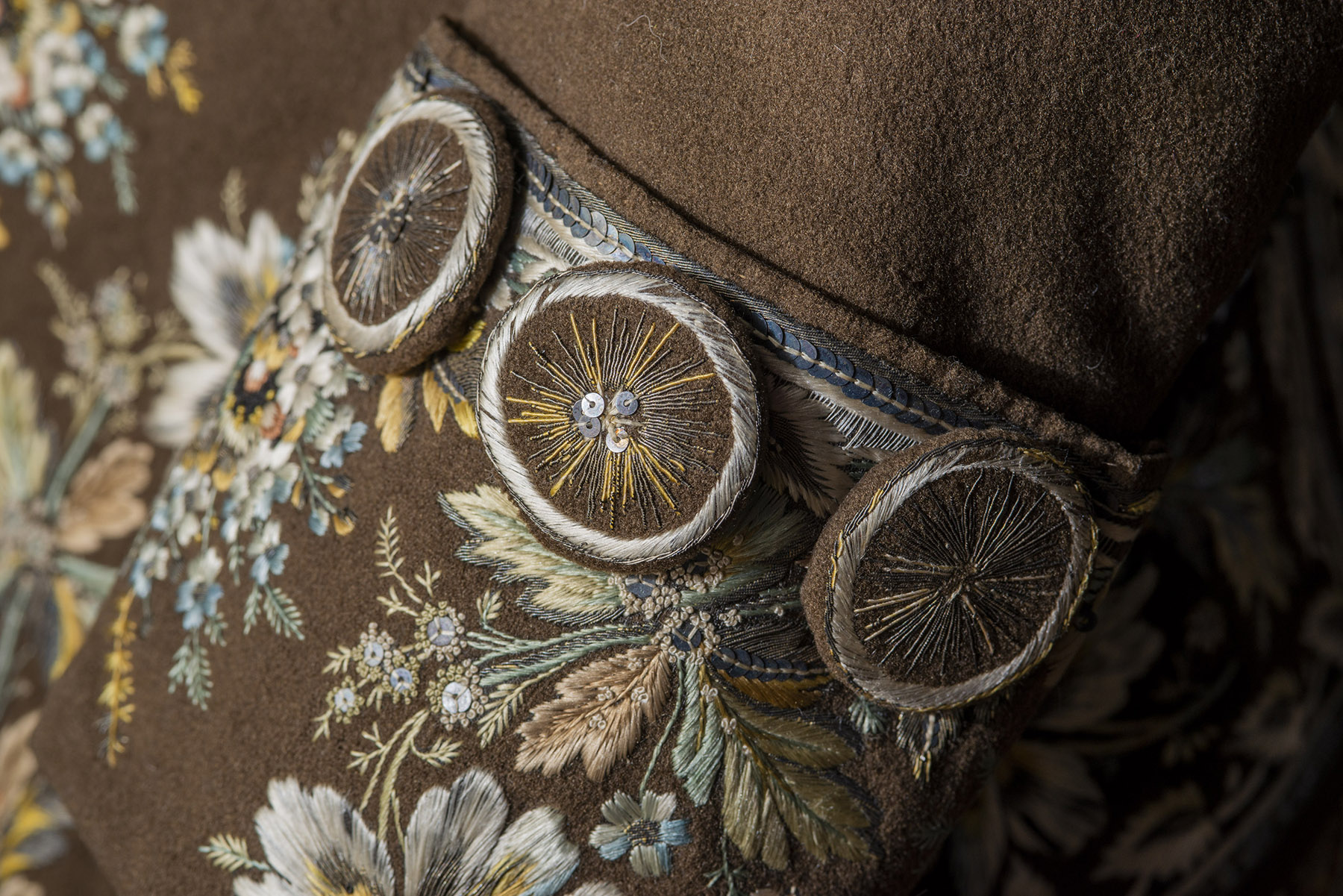 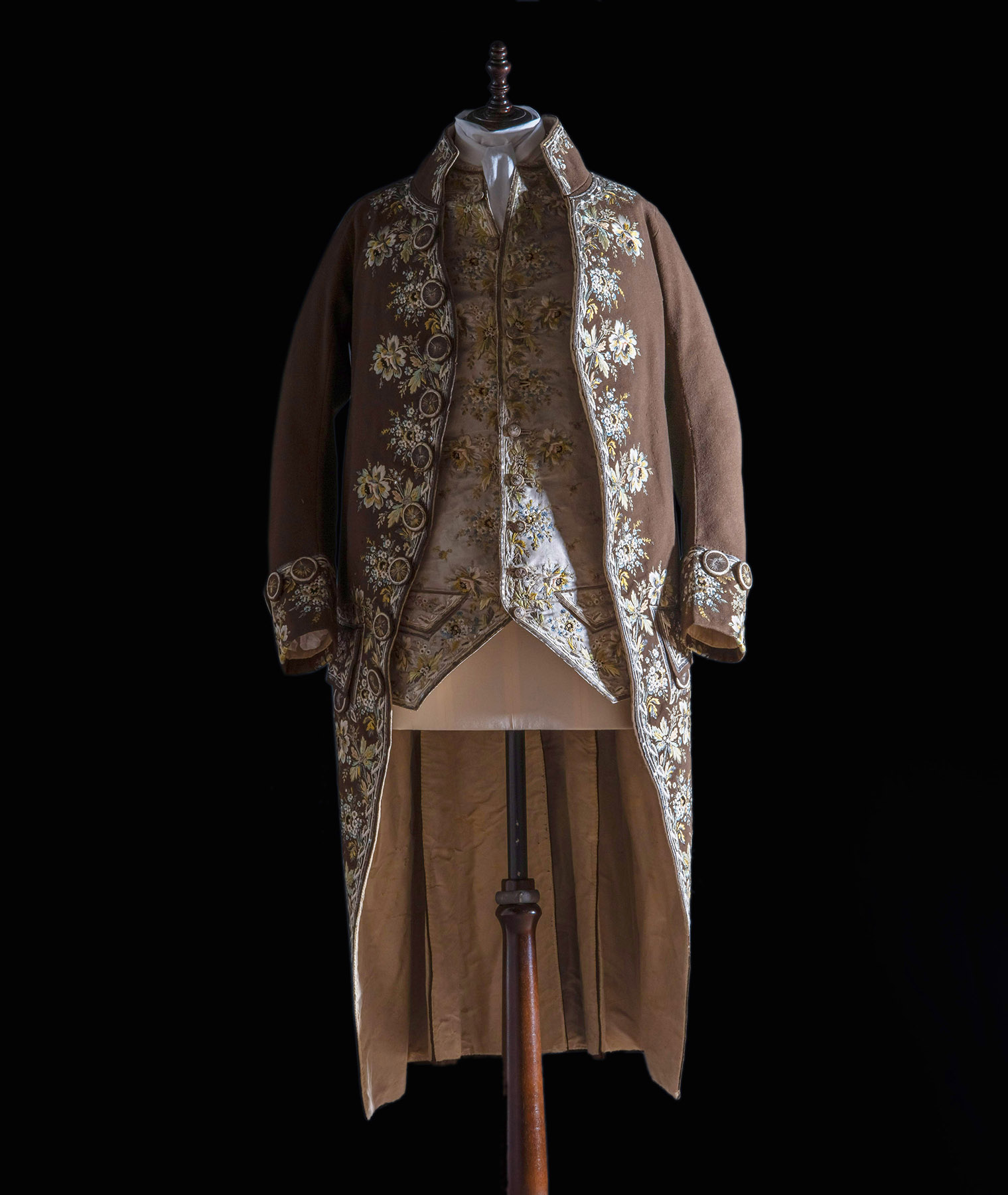 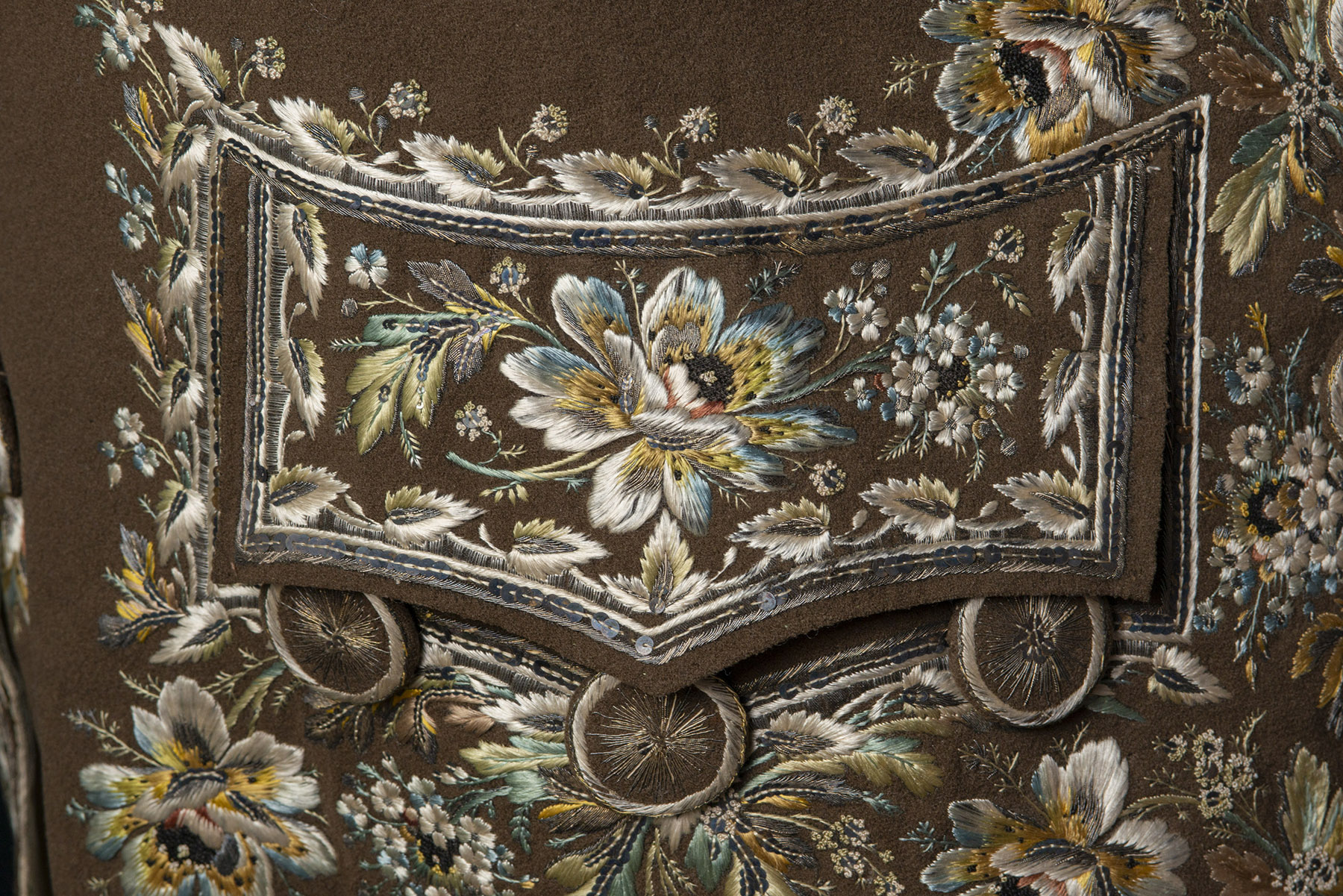 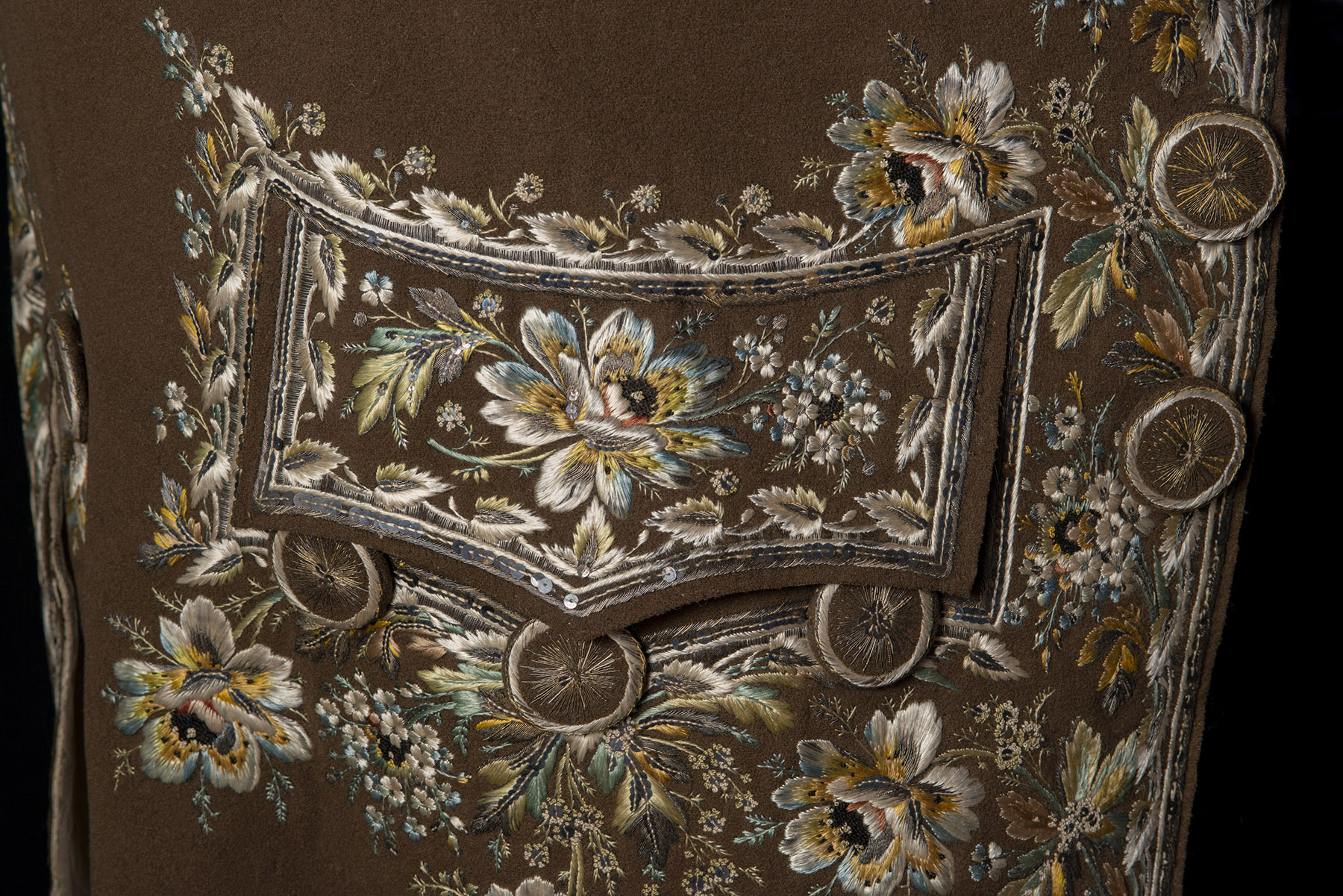 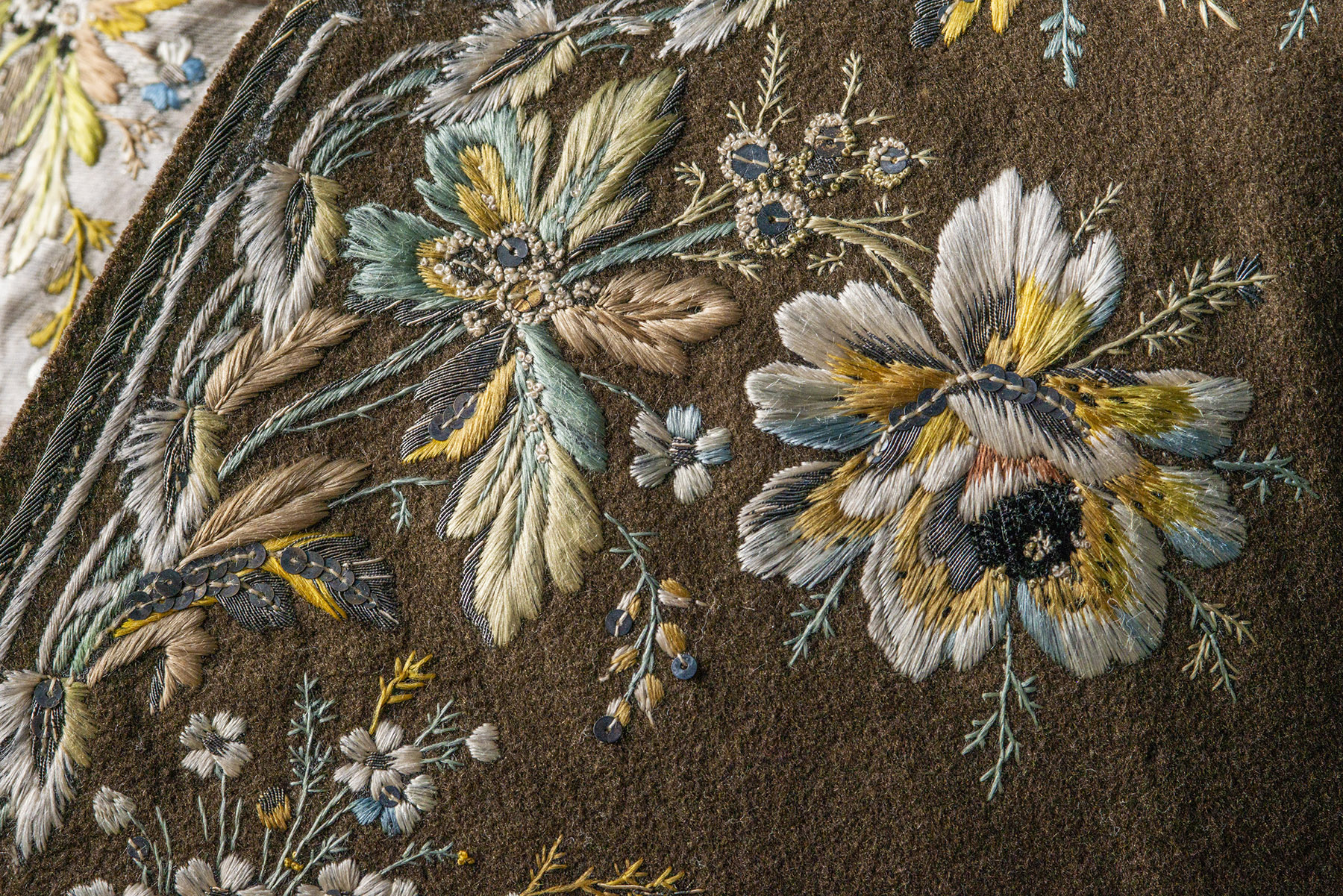 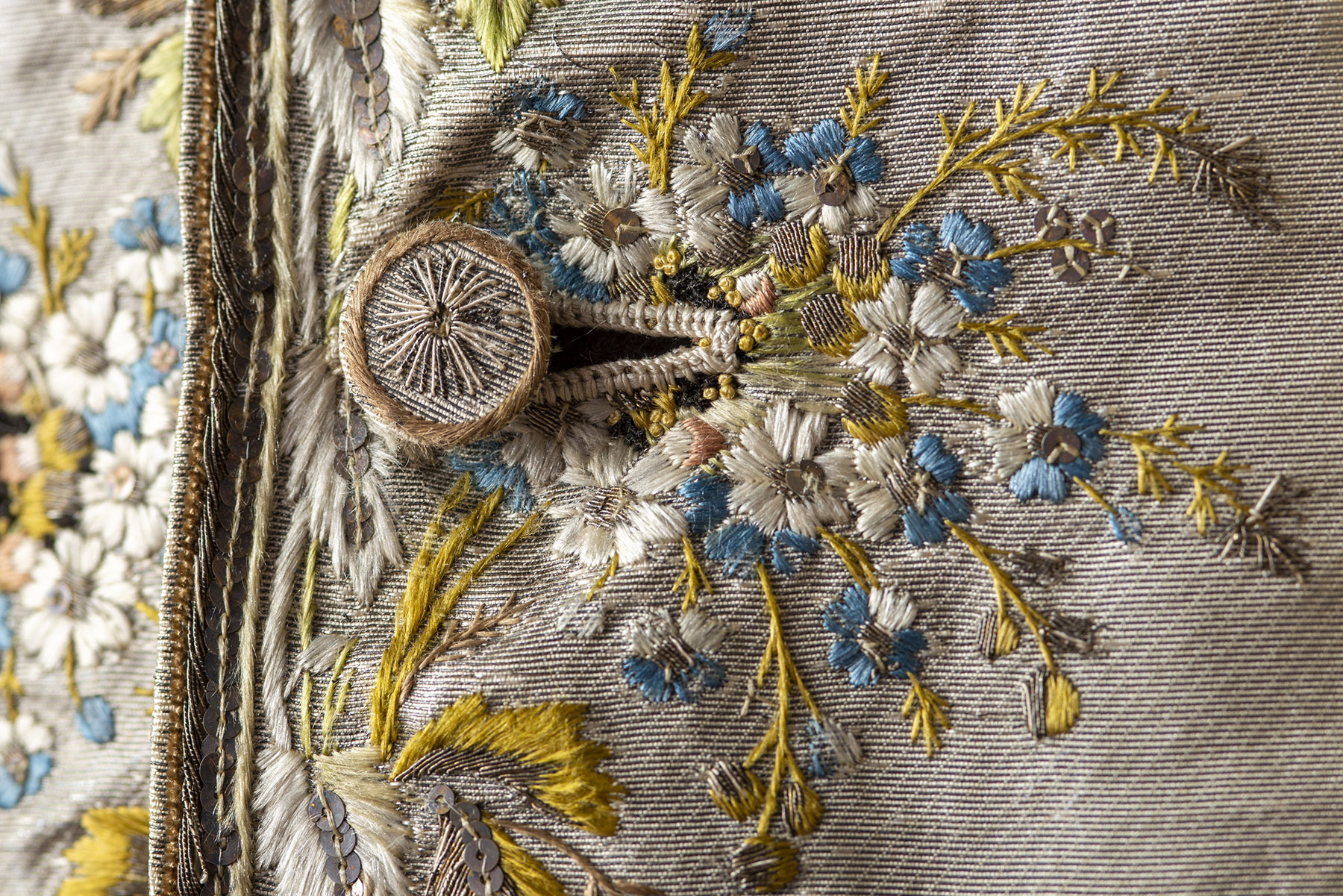 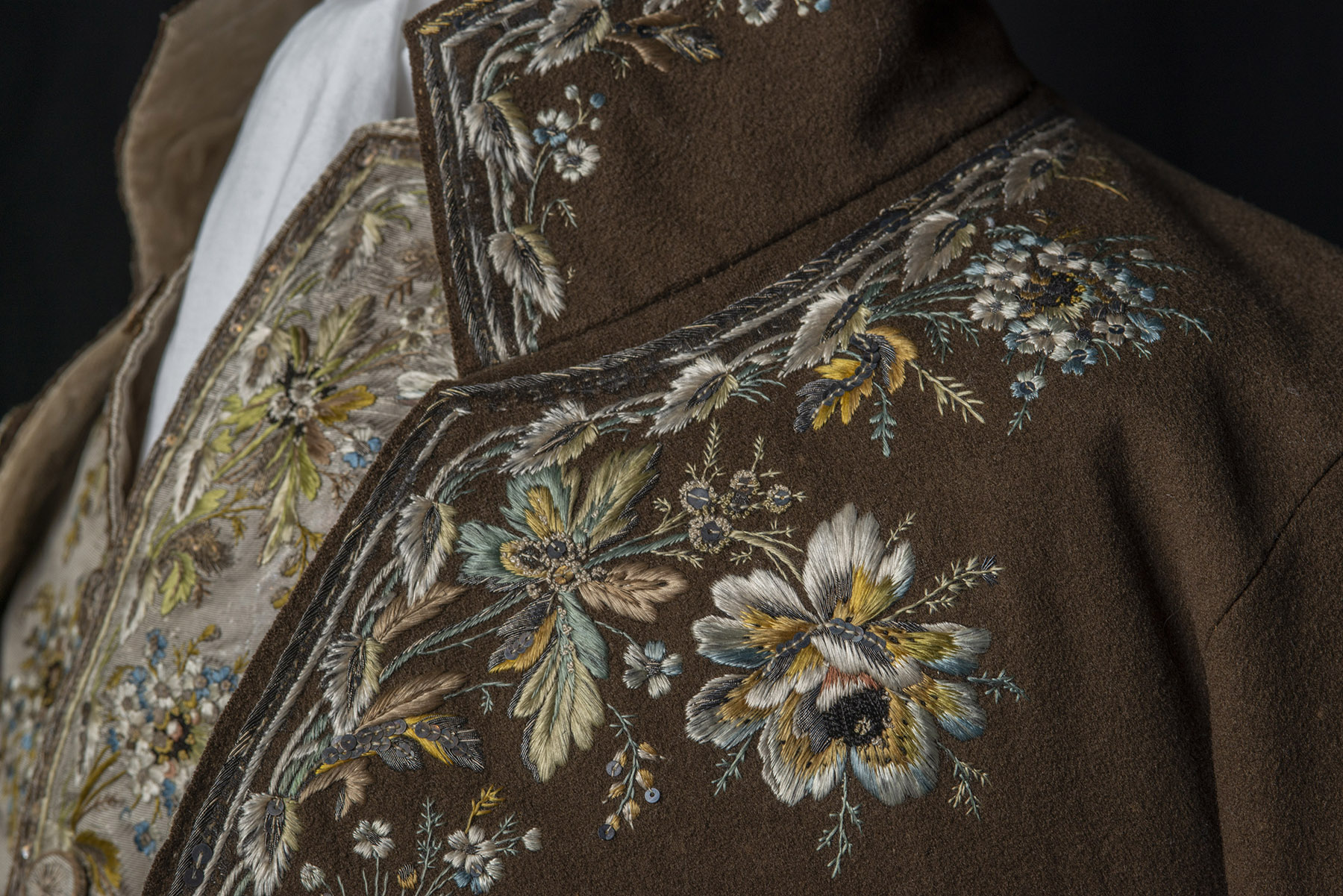 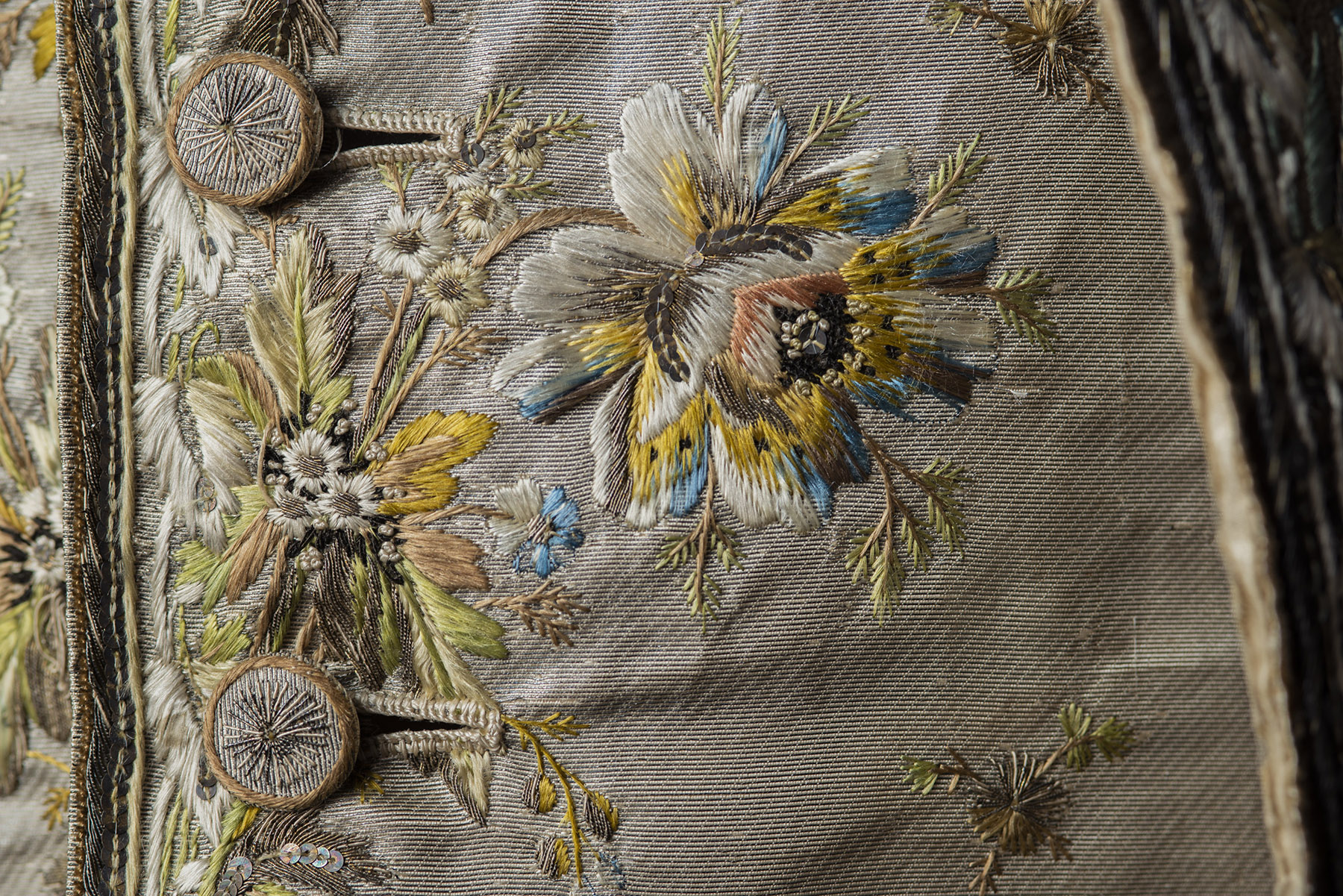 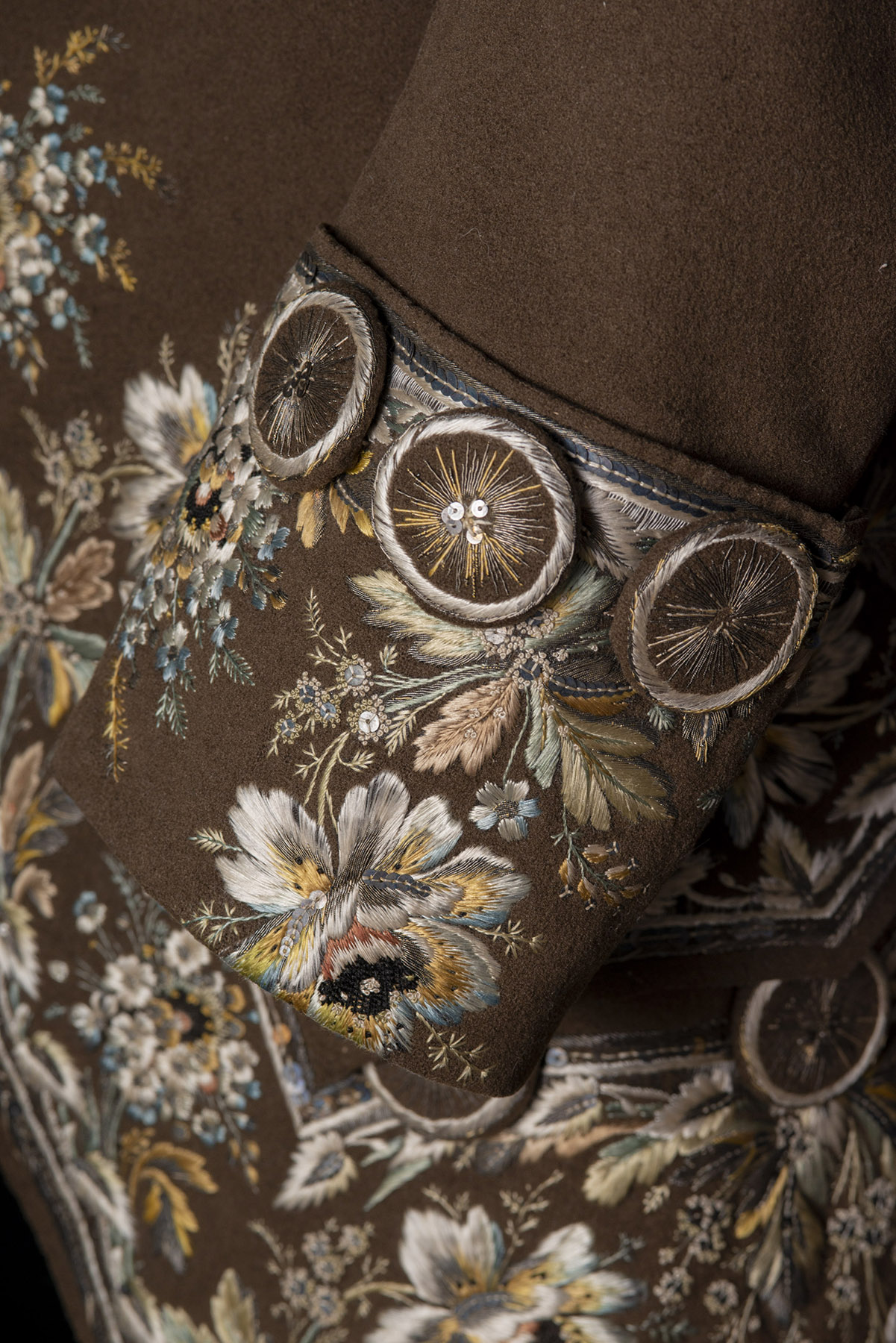 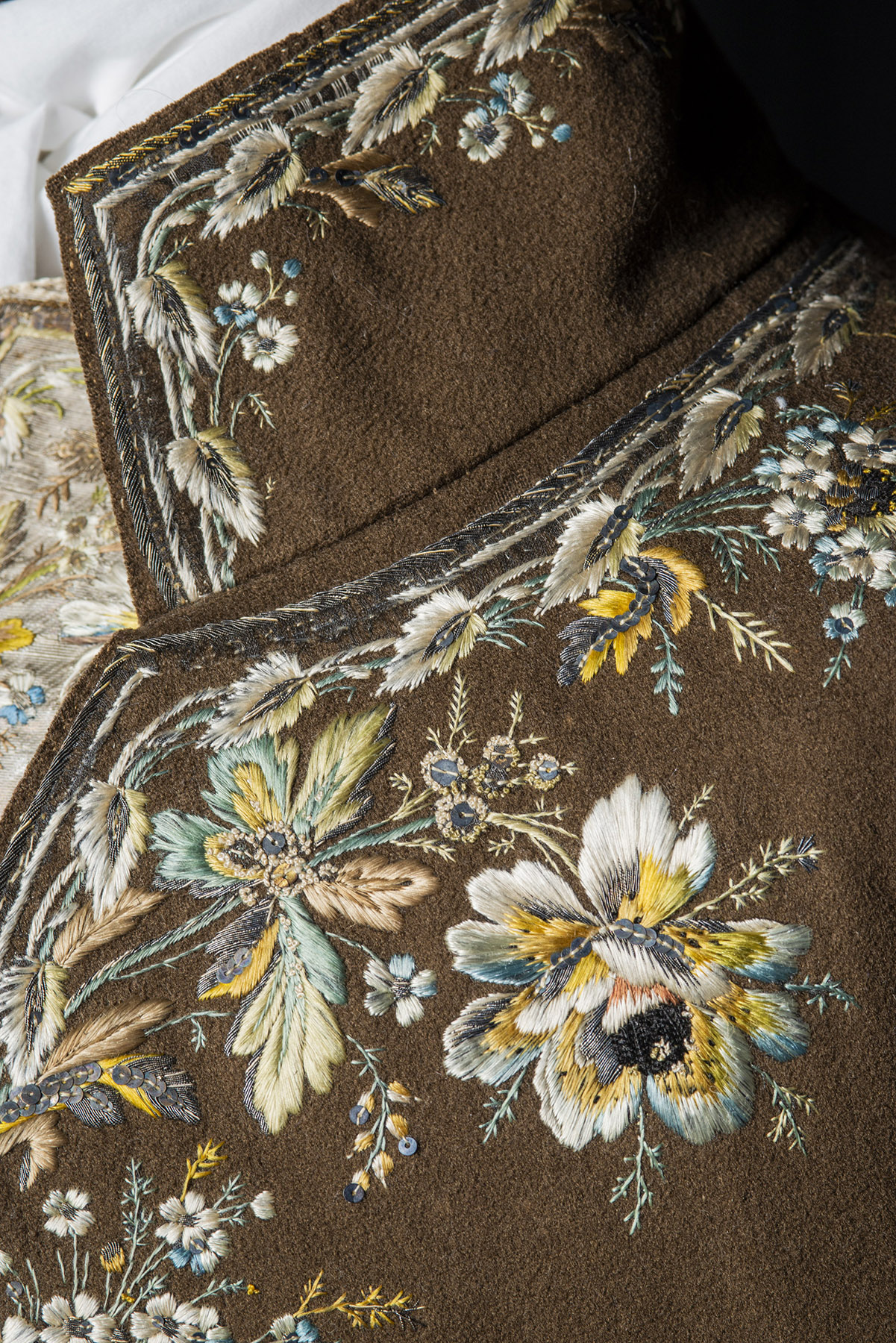 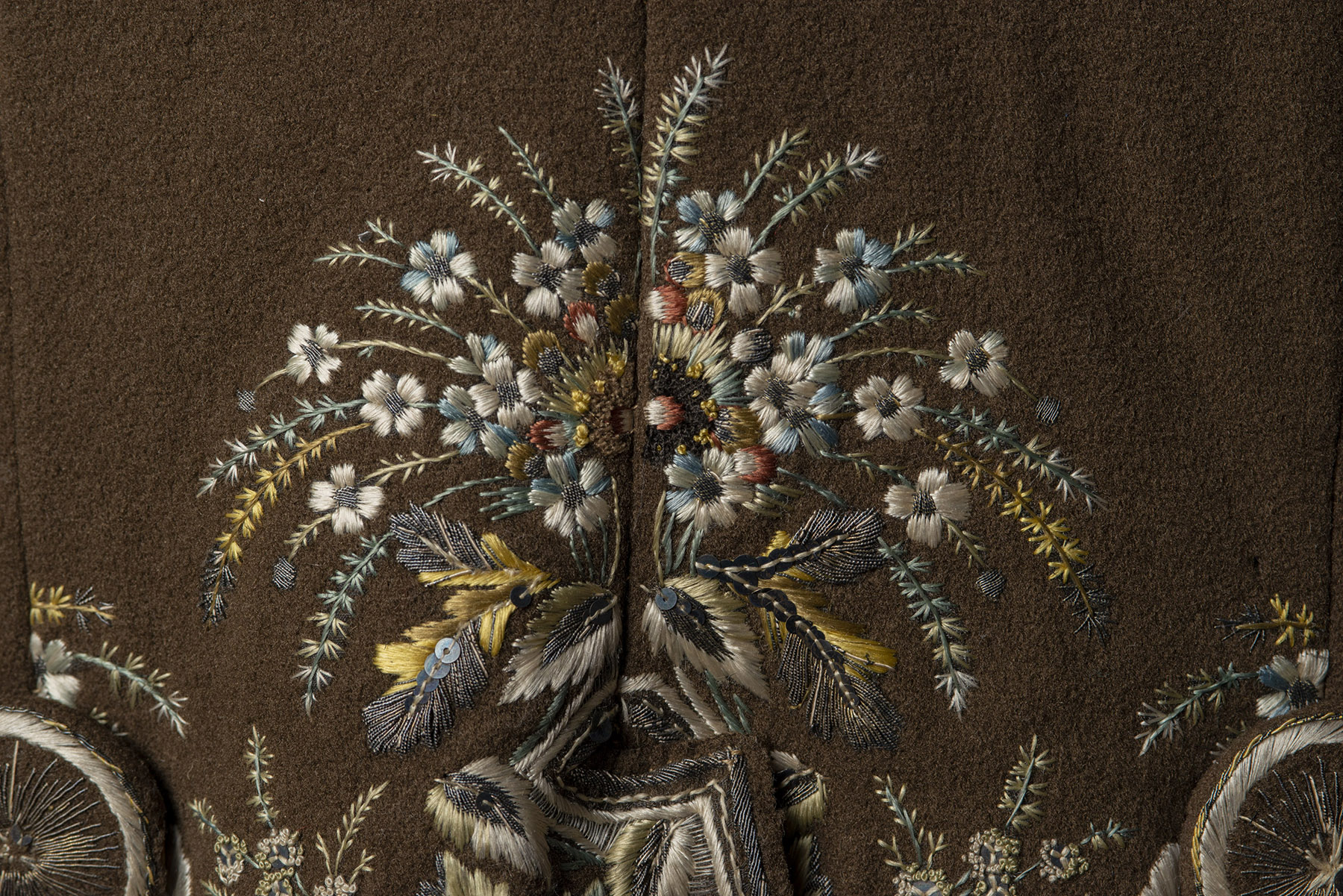 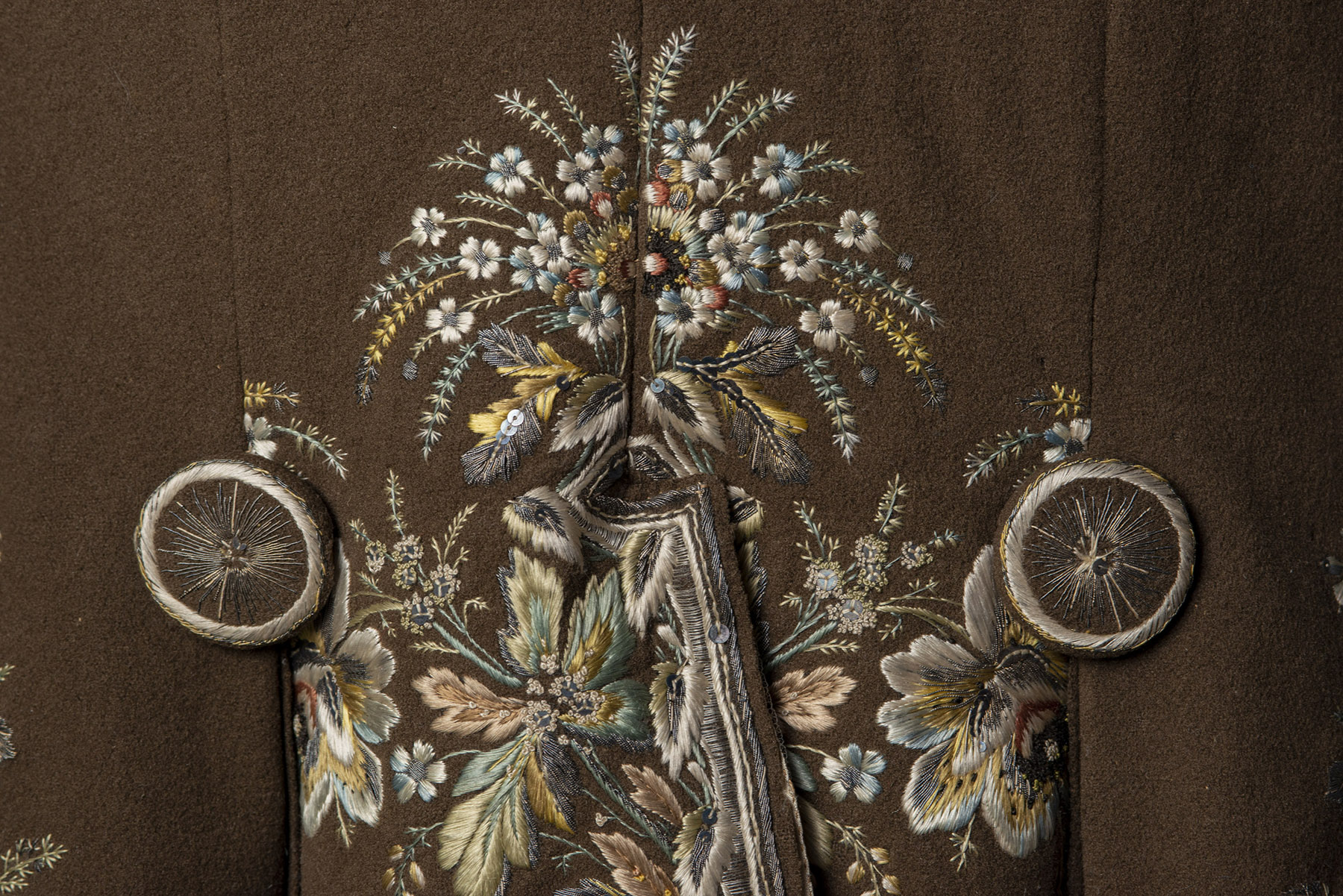 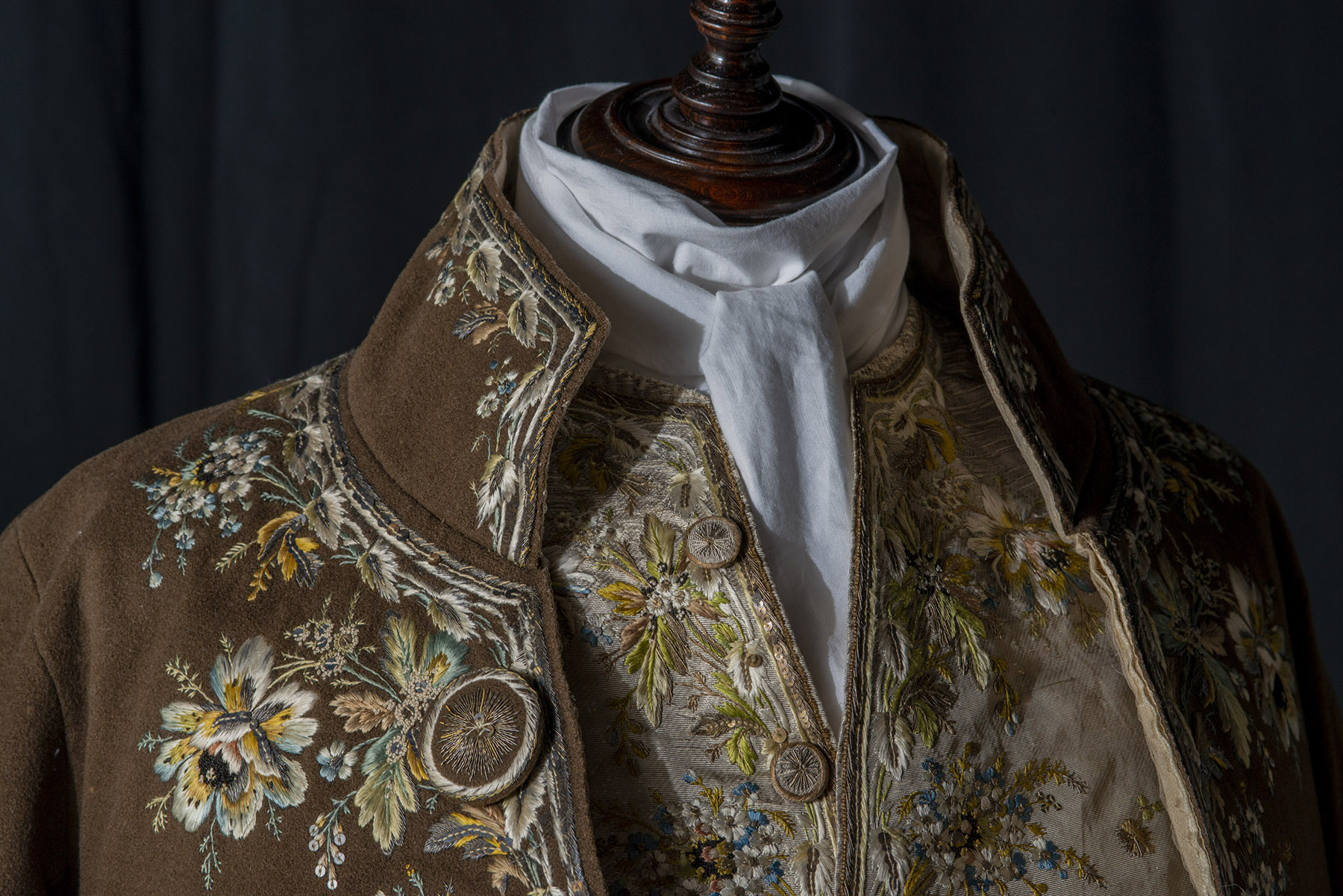 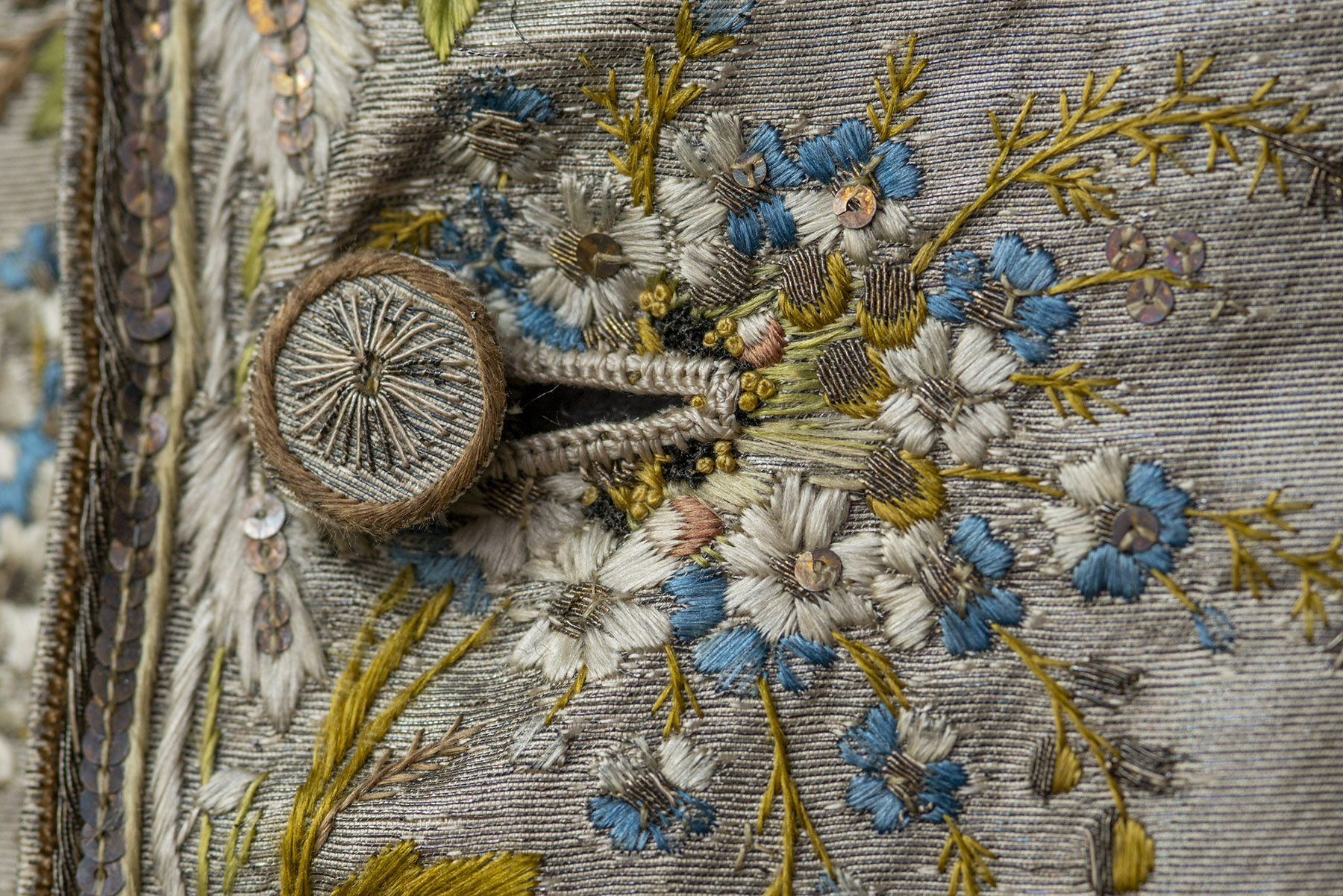 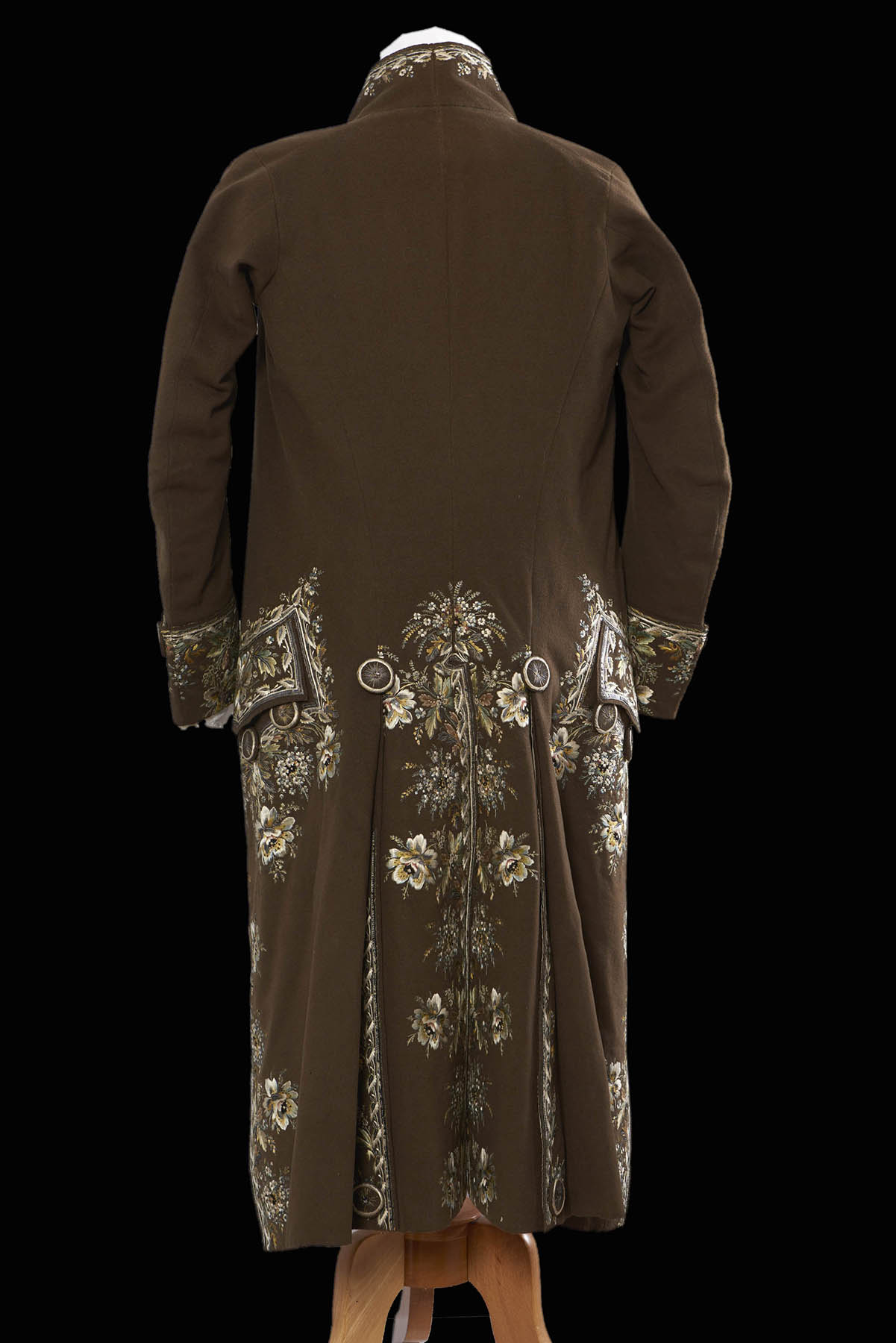 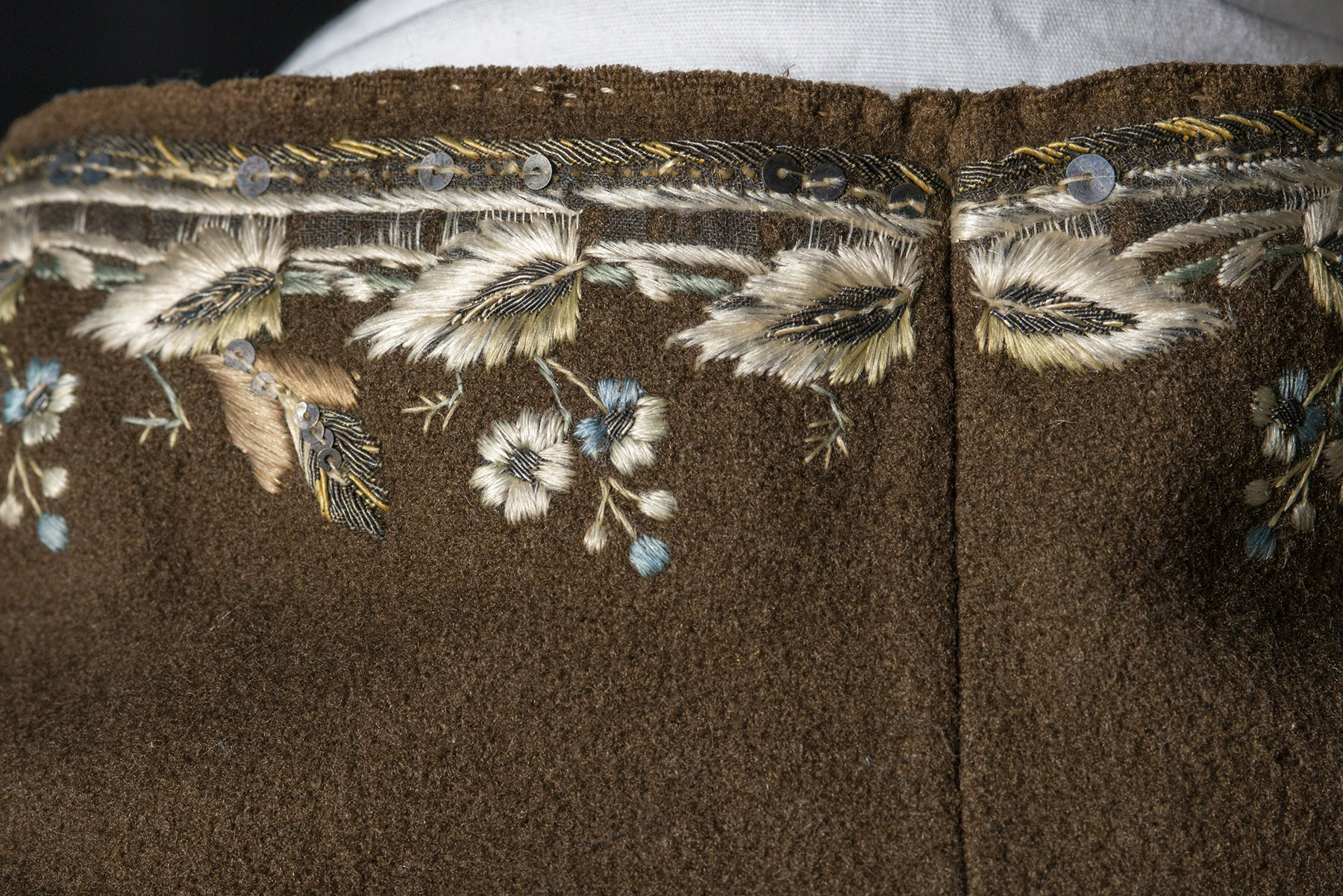 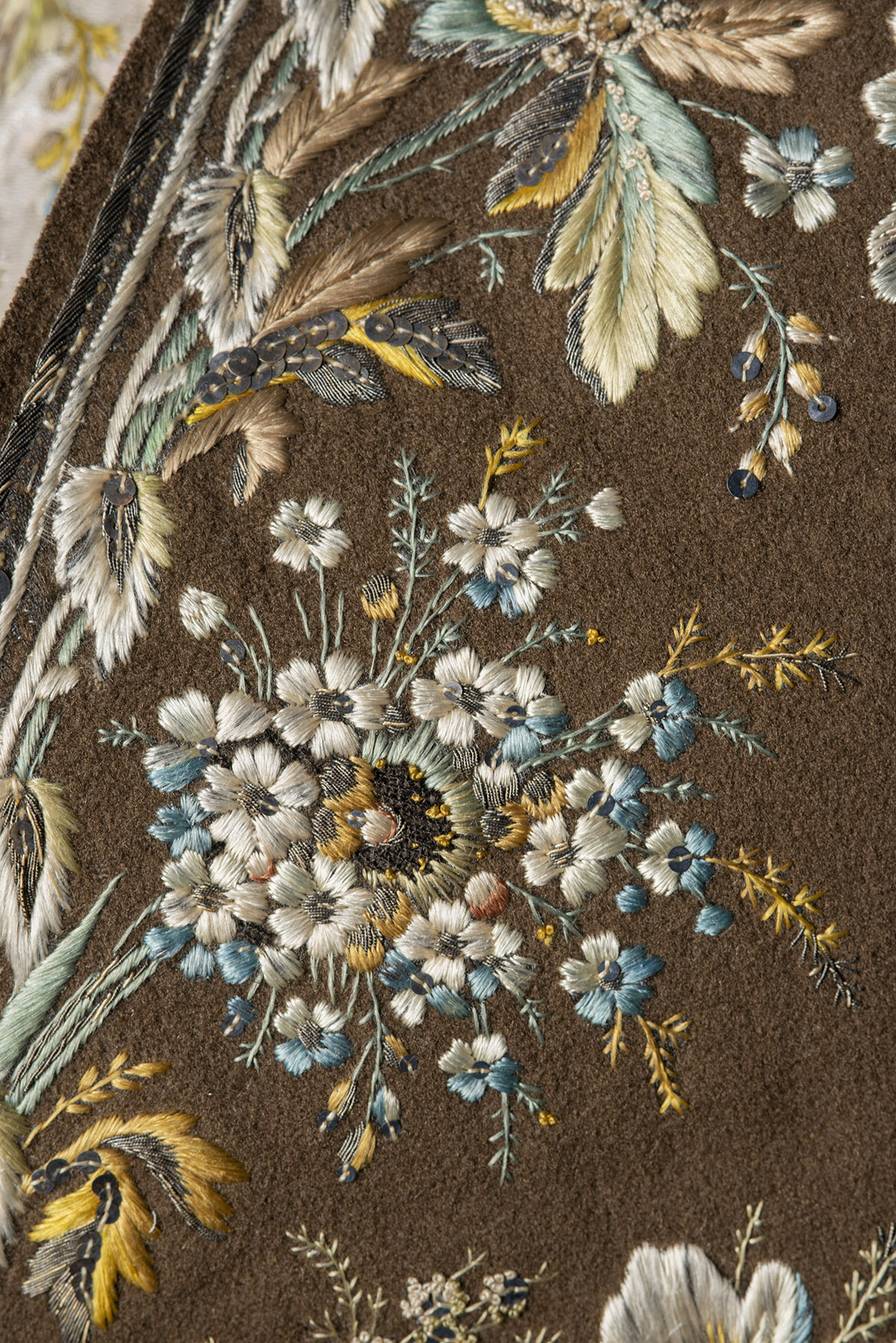 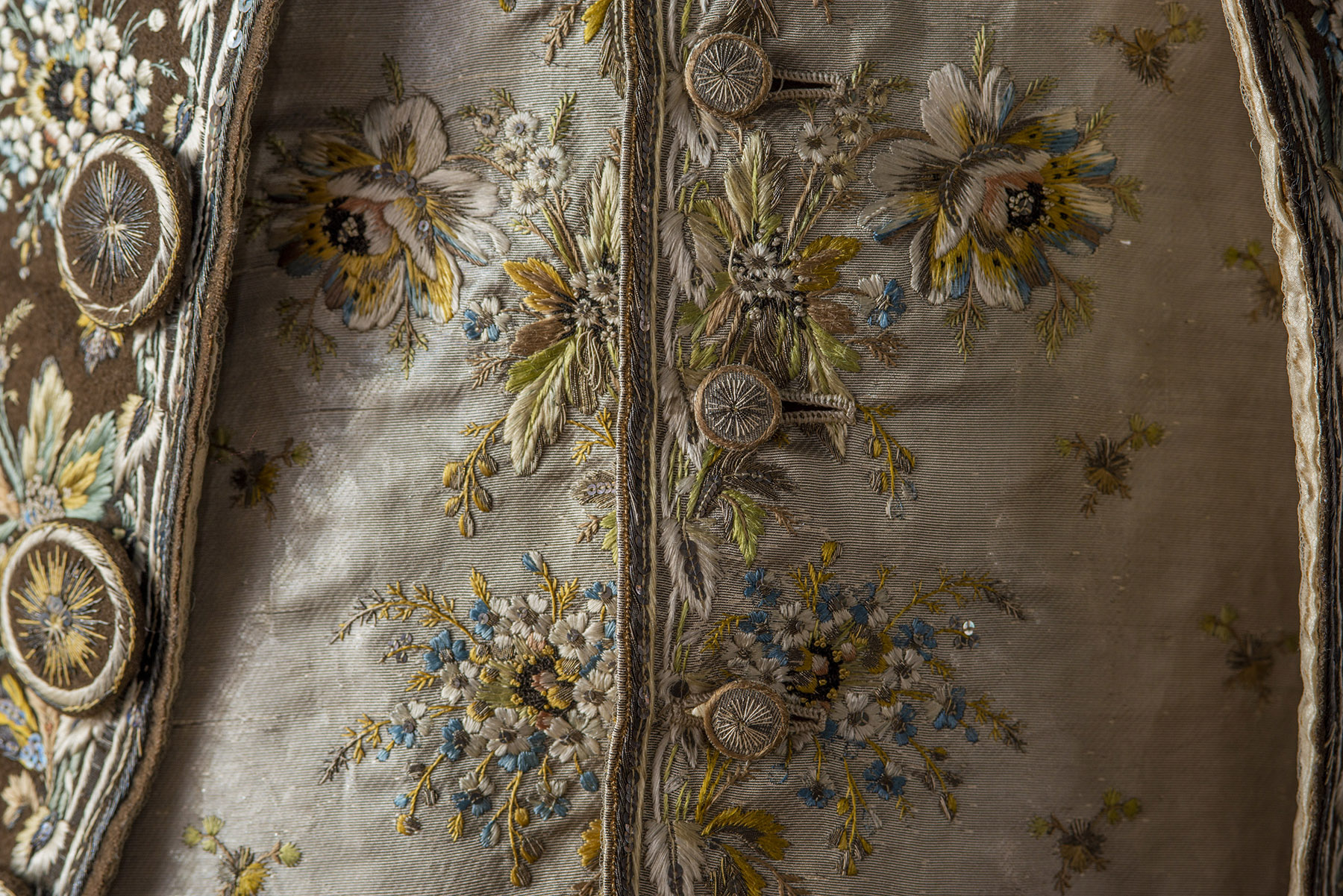 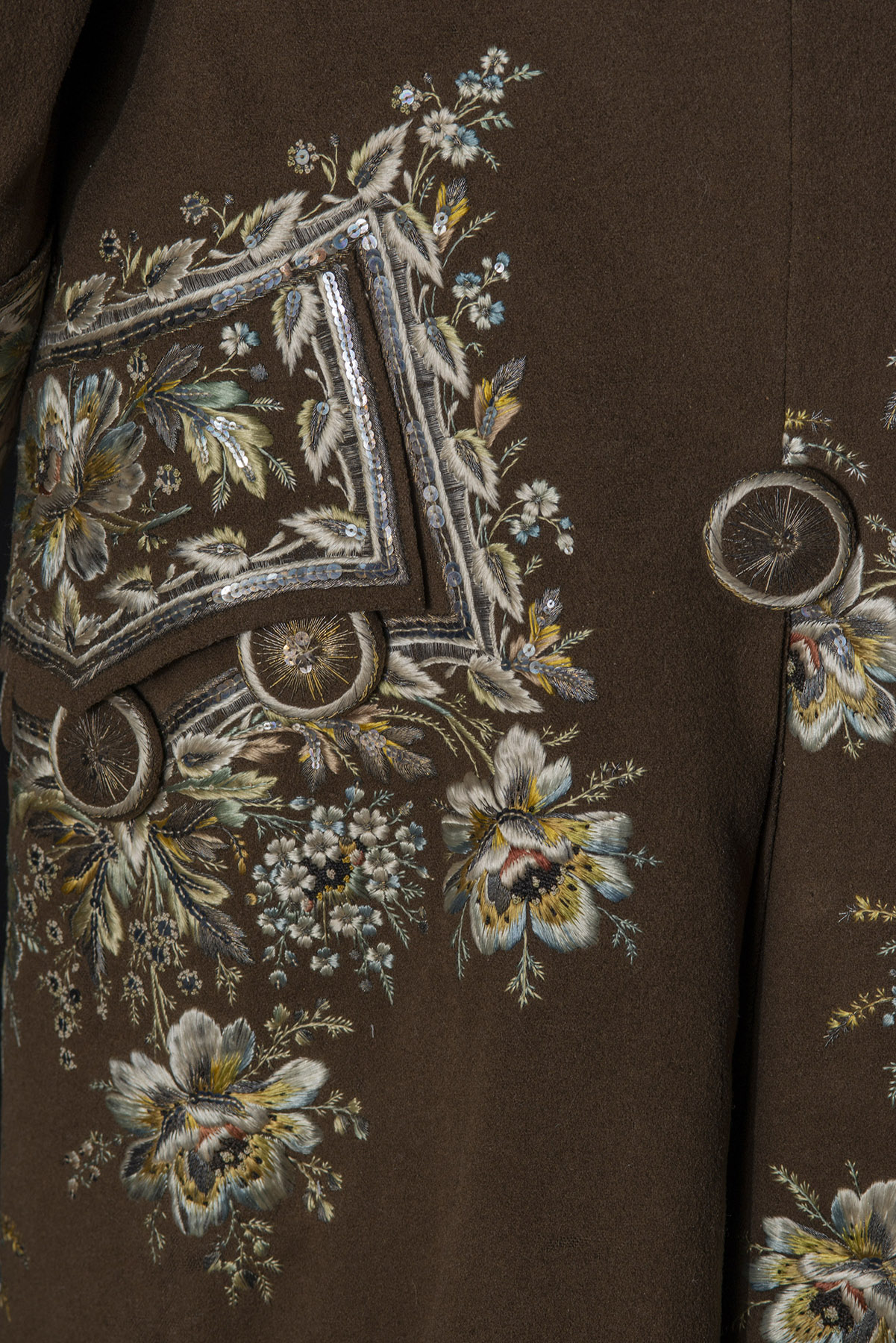 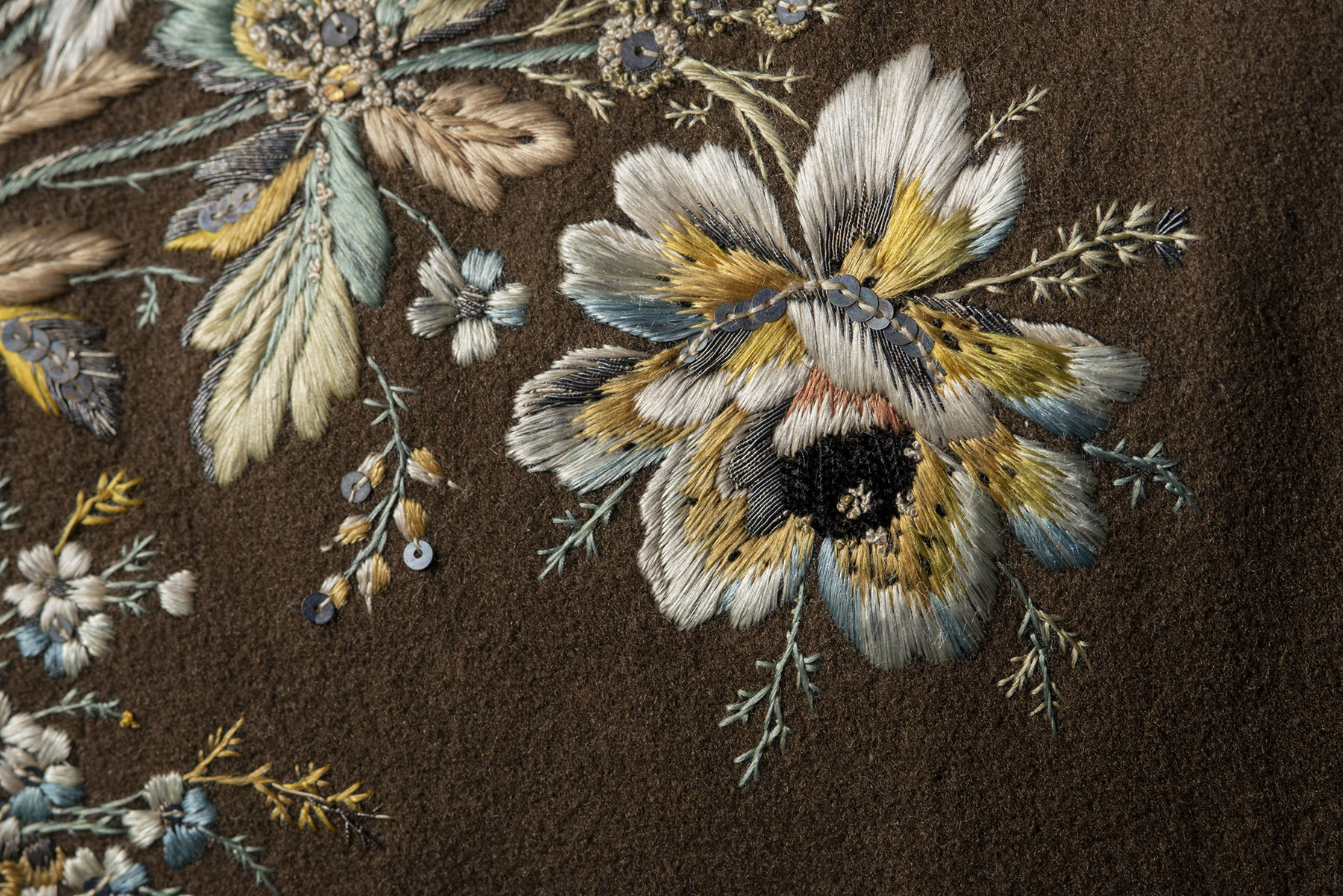 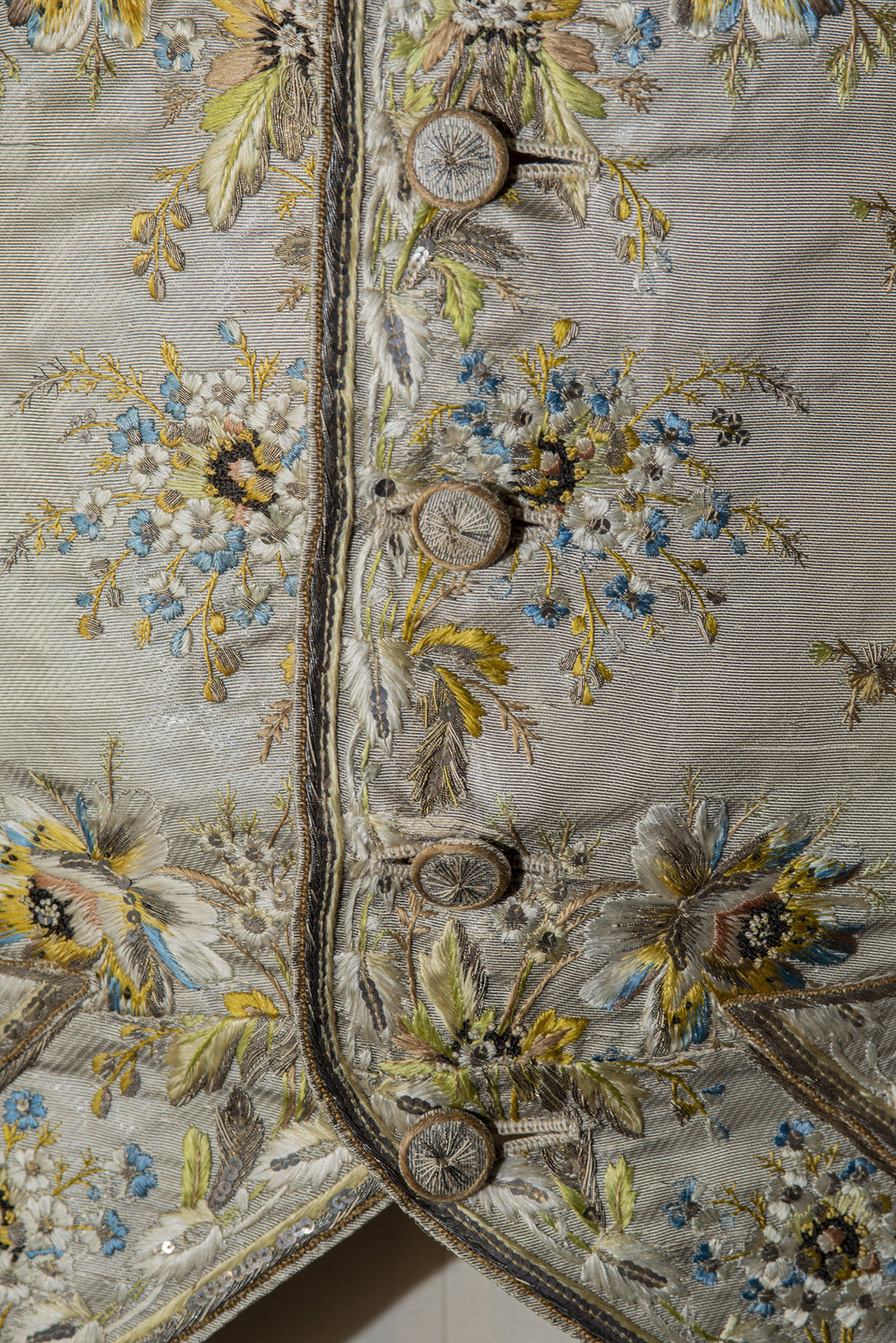 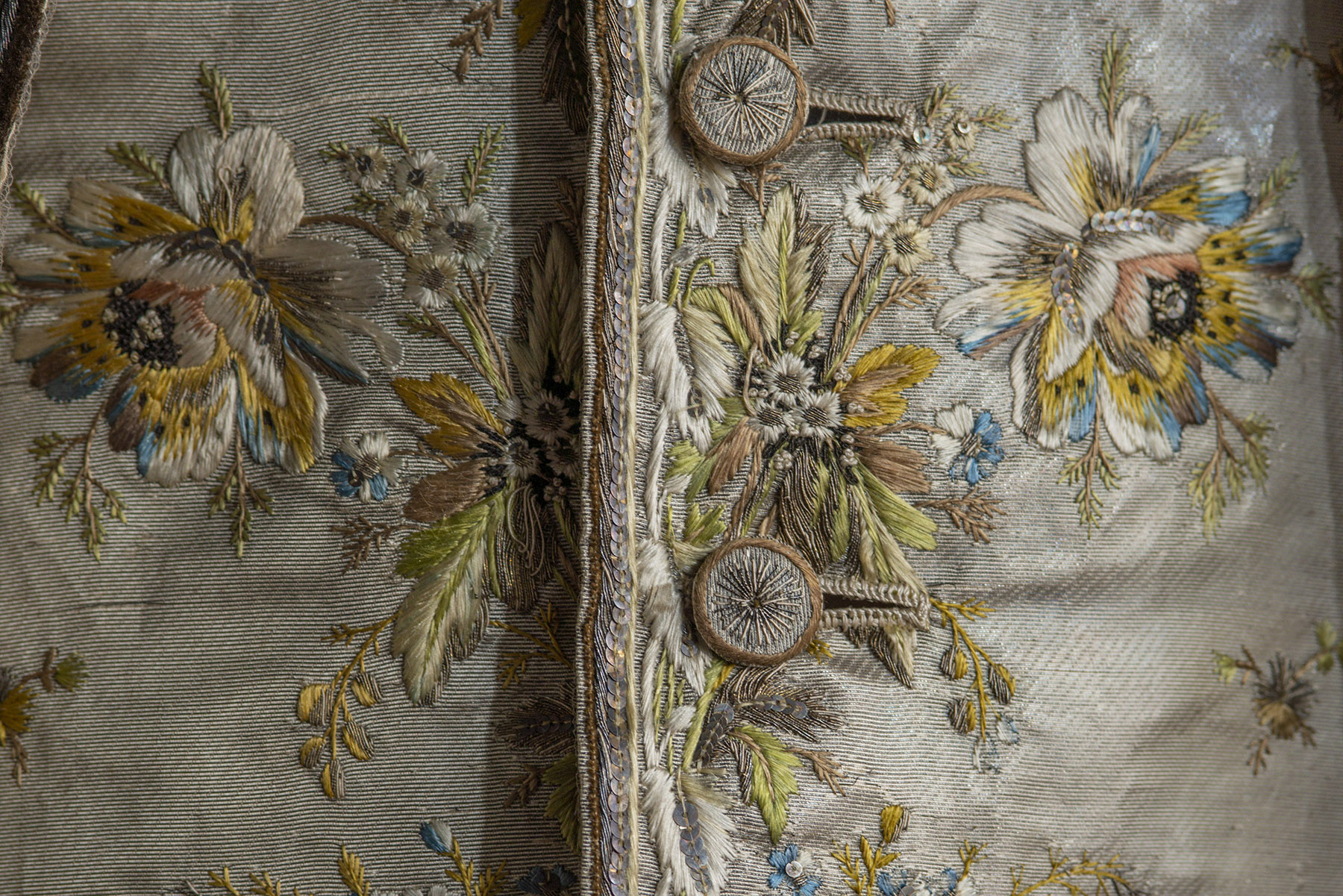 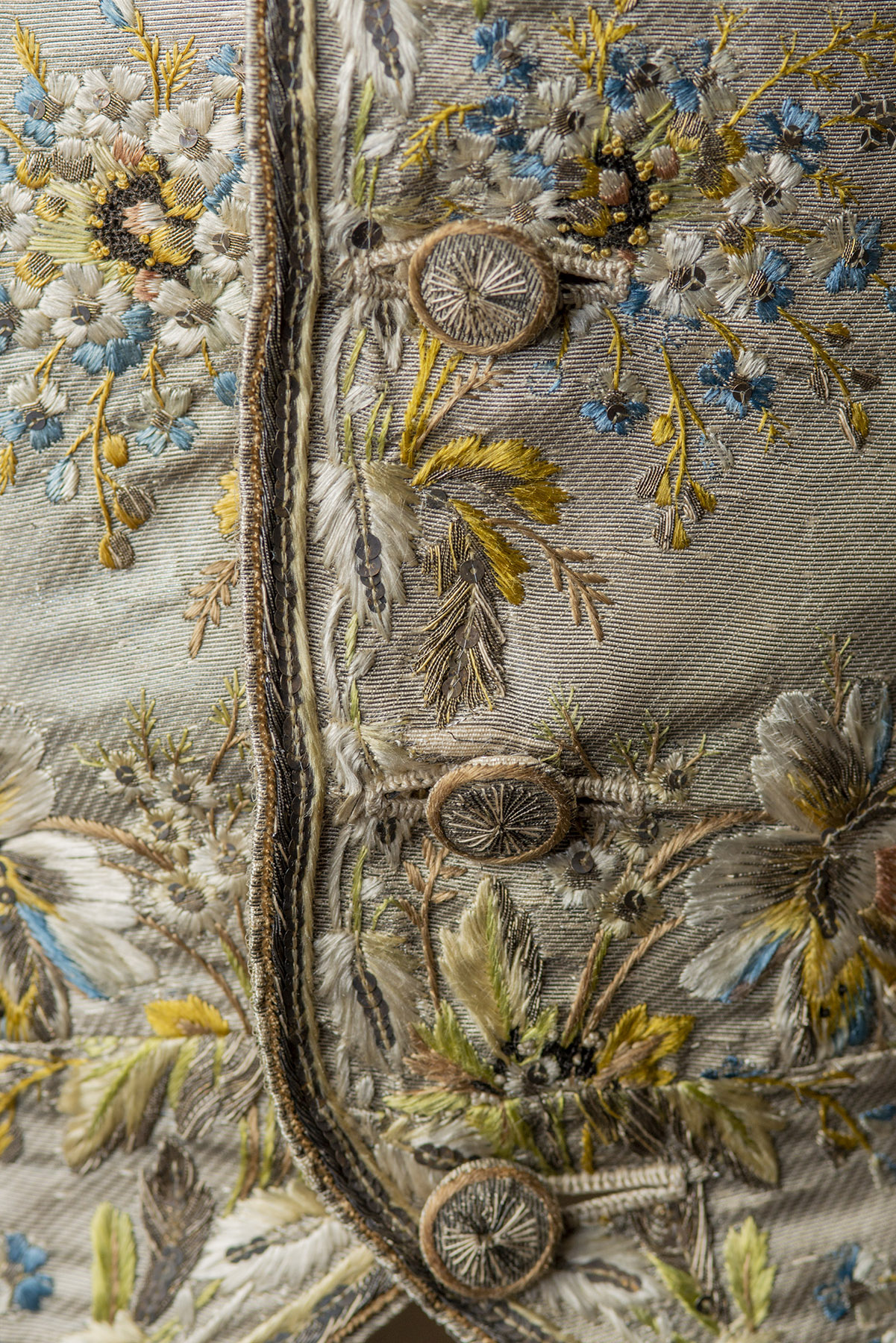 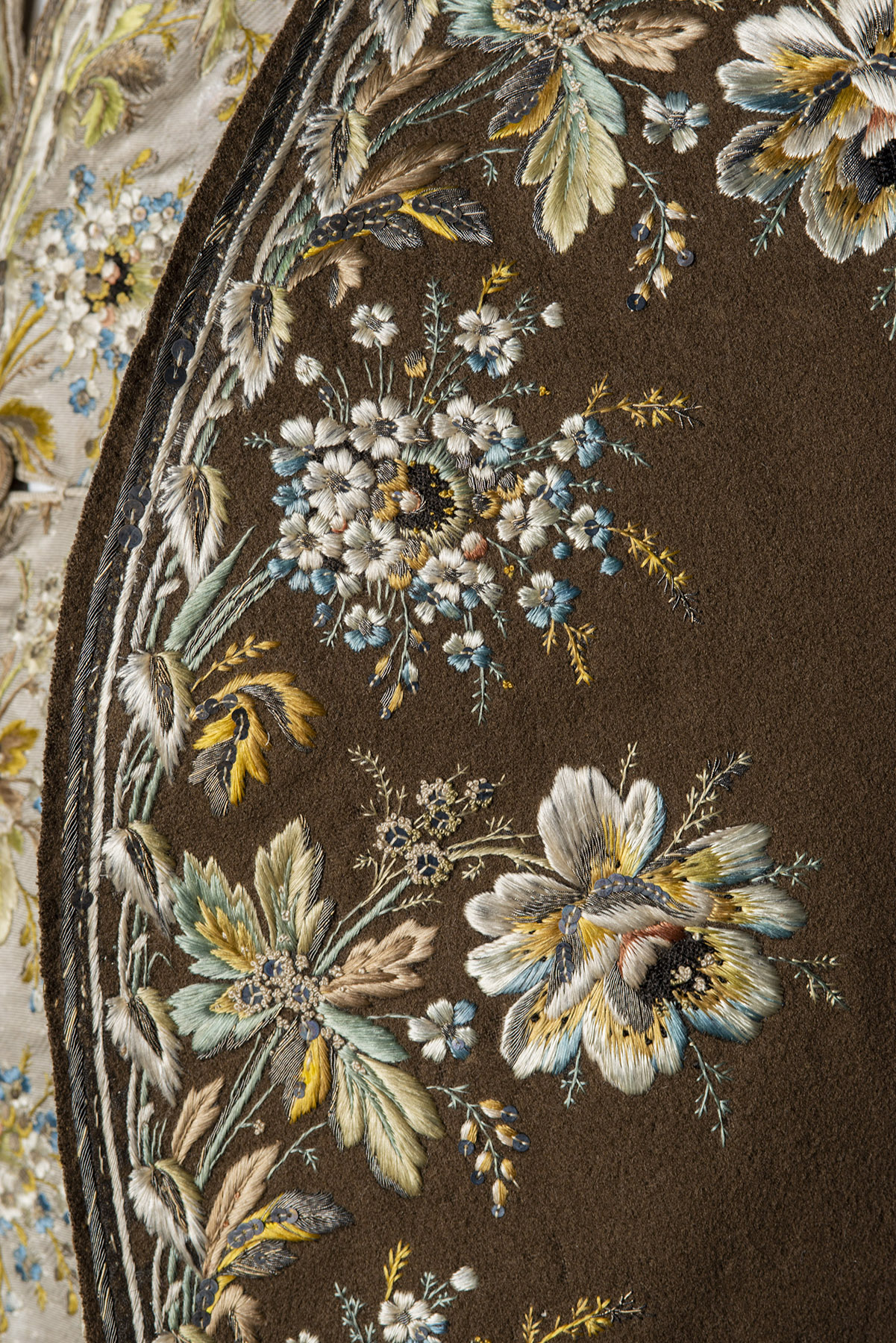 This matching waistcoat and jacket is said to have belonged to Prince Charles Edward Stuart popularly known as ‘Bonnie Prince Charlie’. The garments were purchased at specialist auction of Jacobite relics in Inverness in 1929. There is no documentary evidence for their connections to the Prince, but they are of a date and style that he may have worn at Court while in exile in Italy, where he died in 1788.

This costume is on display and the museum is open now. Visit our website for more details and to plan your Highland Threads tour!

The waistcoat is made of silk and linen with two front pockets and an adjustable buckle on the back. The single-breasted brown wool dress coat is sweep fronted with a Prussian collar, deep cuffs and shallow pockets. It is straight hemmed with a split tail and elaborate embroidery and buttoning around the tail flaps. The coat is lined with heavy silk and has buttons but no buttonholes. This indicates that the jacket was designed to show off the matching waistcoat. The jacket and waistcoat would have originally been part of a three-piece suit but the matching breeches were not part of the auction lot and are believed to be lost.

Both garments are decorated with elaborate embroidery in the French style in multiple colours of green, blue, white and brown with details in sequins, beading and metallic threads. The embroidery would have been completed before the cloth was cut and involved complex techniques and great skill.

The garments originally came from an old house in the Newcastle-upon-Tyne area and were always known in the owner’s family as ‘Prince Charlie’s coat’. Although not a Highland costume, these garments link to the history of the Jacobites and Highland history. They are high quality garments that would have been extremely expensive and are still impressive today. The jacket and waistcoat are part of the museum’s wider Jacobite collection. Other textile related Jacobite items include two nightgowns and a nightcap that belonged to Charles, a fragment of the Moy Plaid and a copy of Costume of the Clans published in 1843 by the Sobieski Stuart brothers who fraudulently claimed to be heirs of Prince Charles Edward Stuart.

In 2018, Highlife Highland commissioned the forensic artist Hew Morrison to create a digital portrait of Prince Charles Edward Stuart. Hew used his skills in forensic art using the death mask held in the collections of Inverness Museum & Art Gallery, to create a striking new portrait of the Prince. 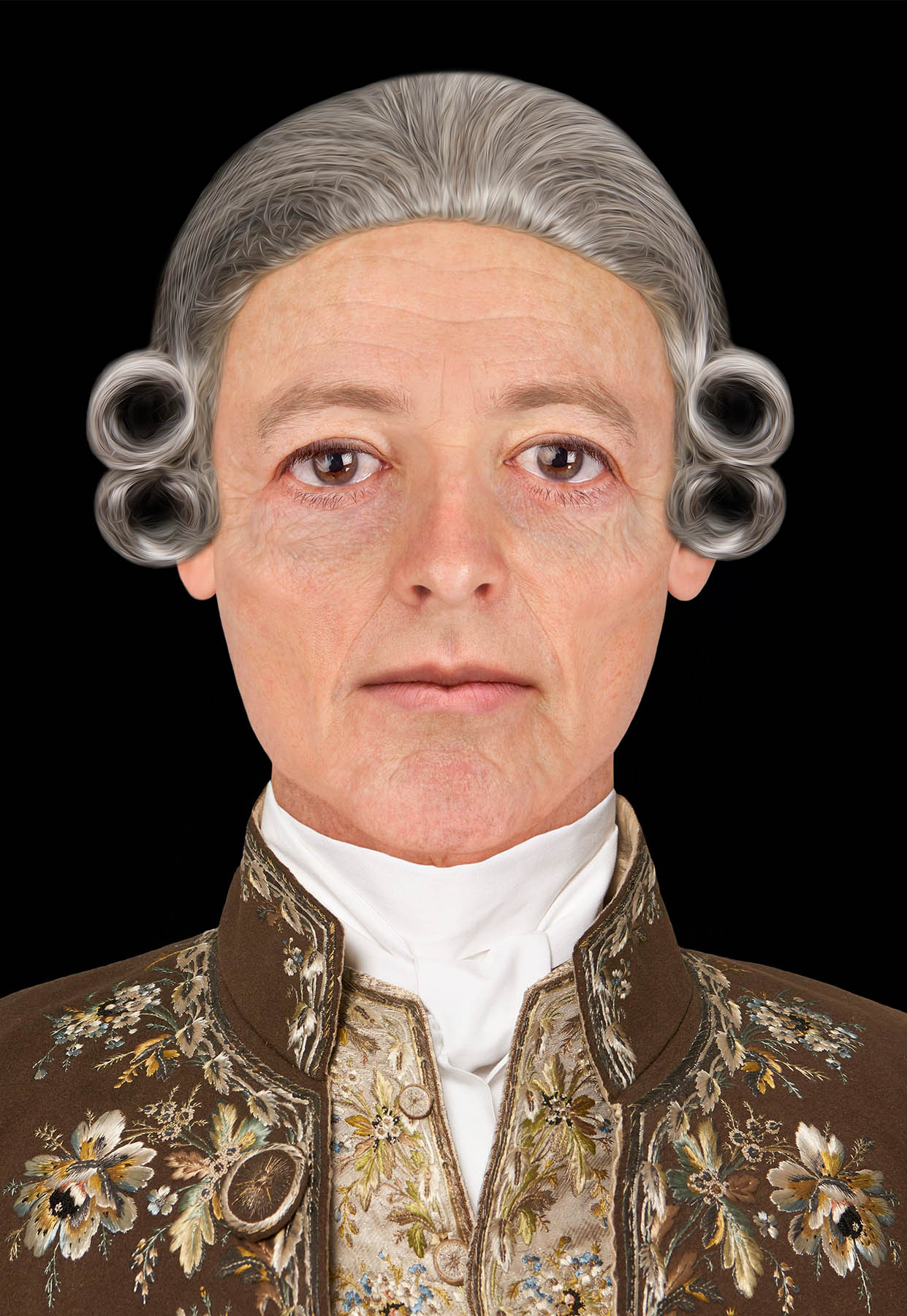 Discover more about the unique history and culture of the city of Inverness and the Scottish Highlands.

Help INVERNESS MUSEUM work through the pandemic closures by making a donation.