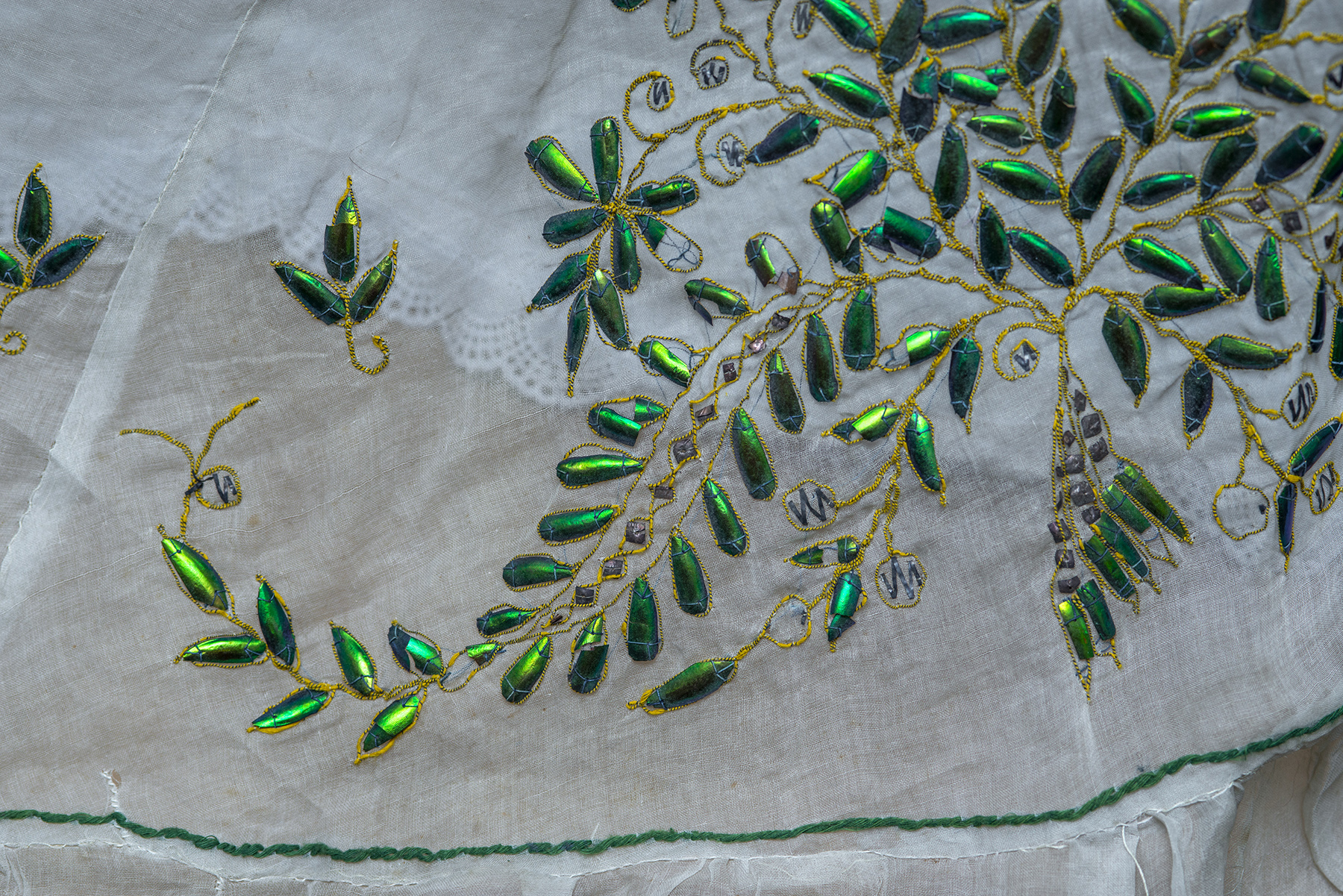 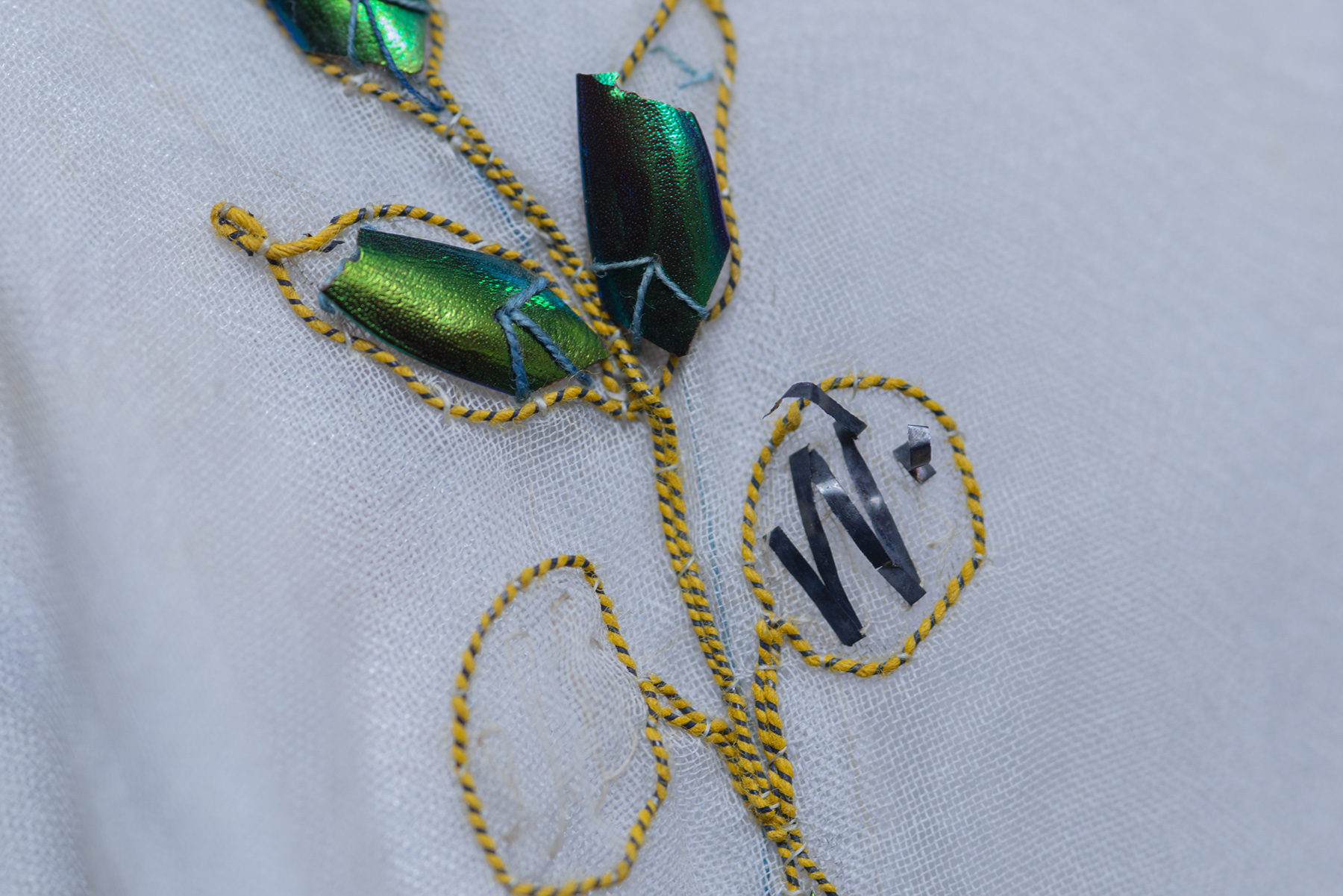 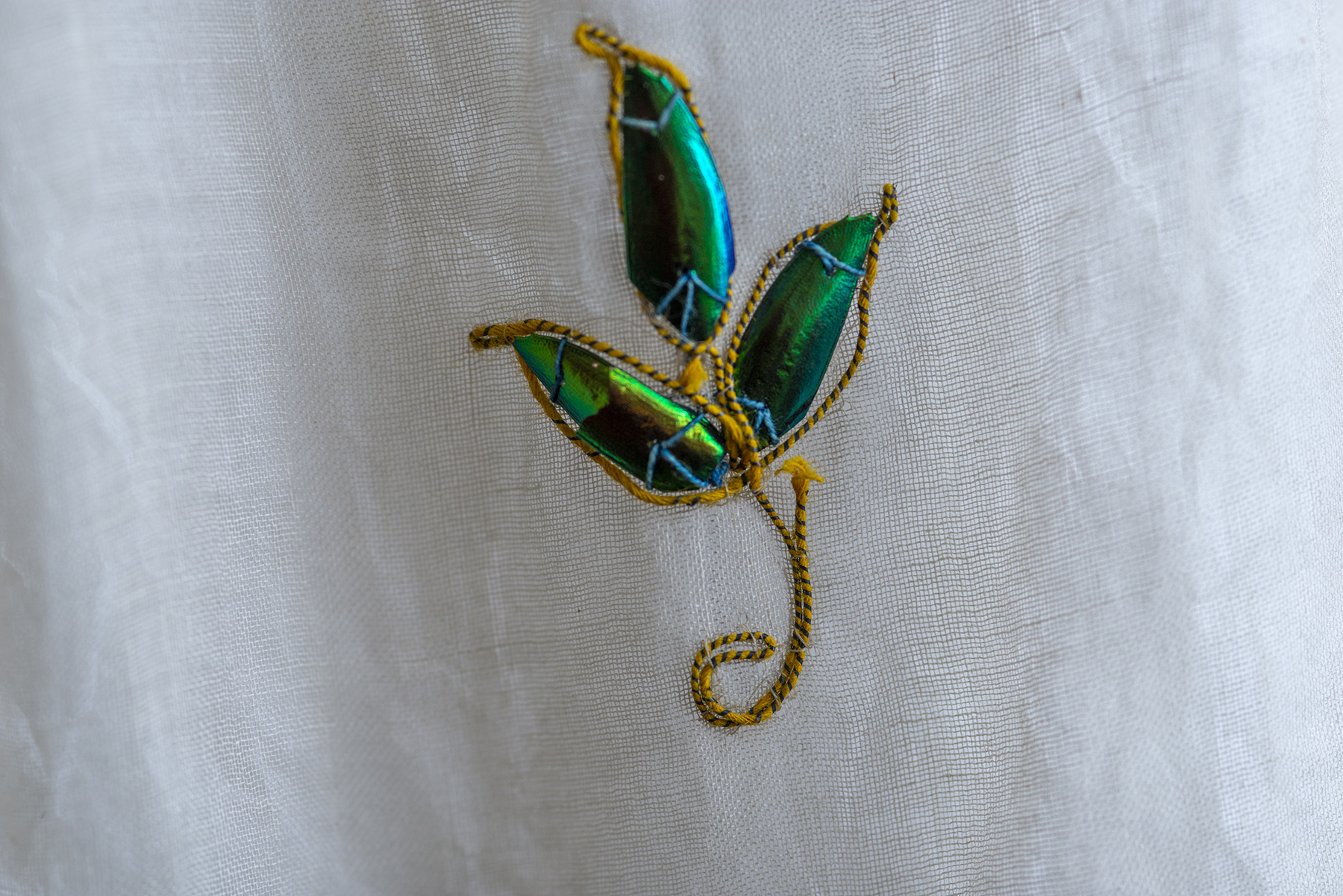 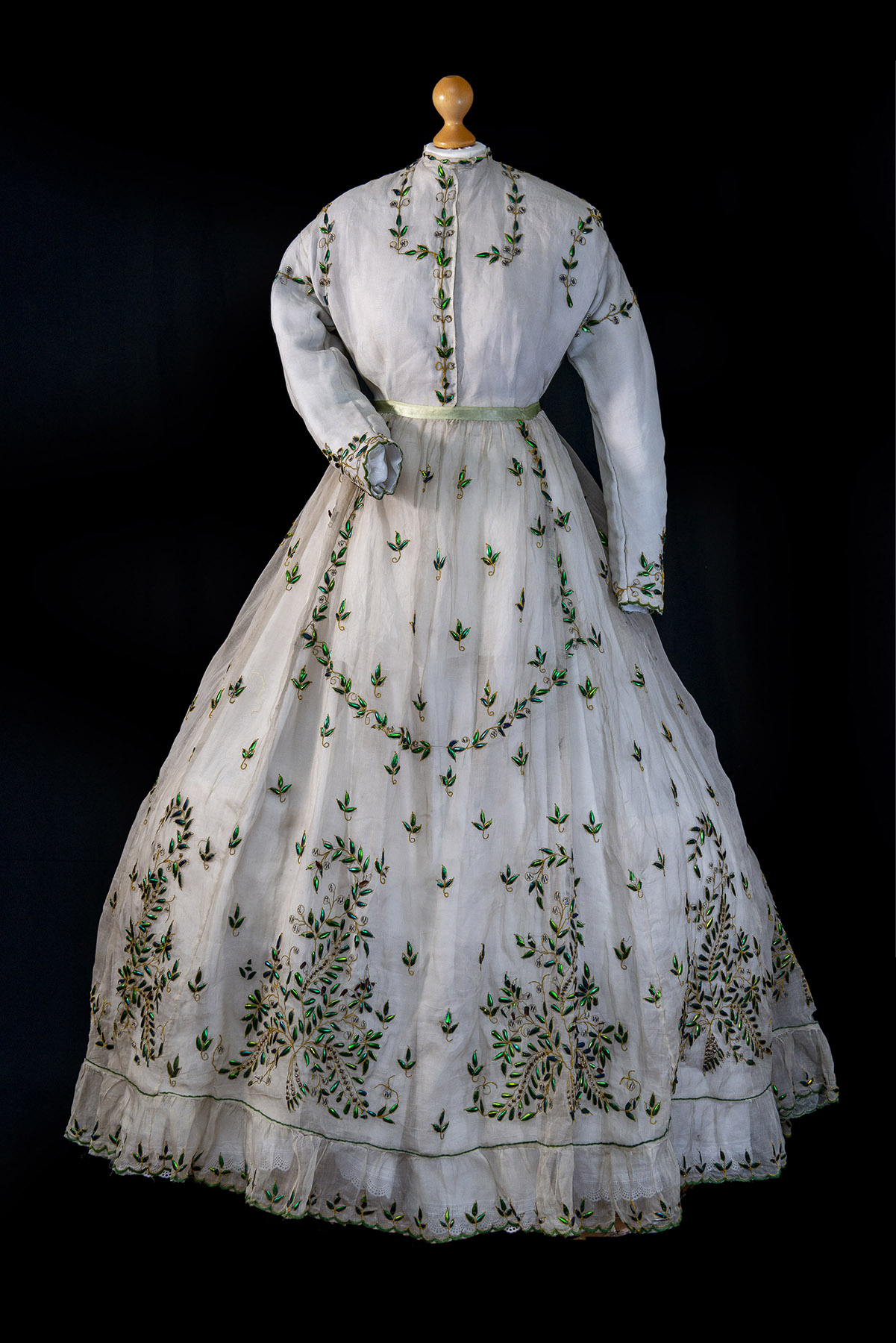 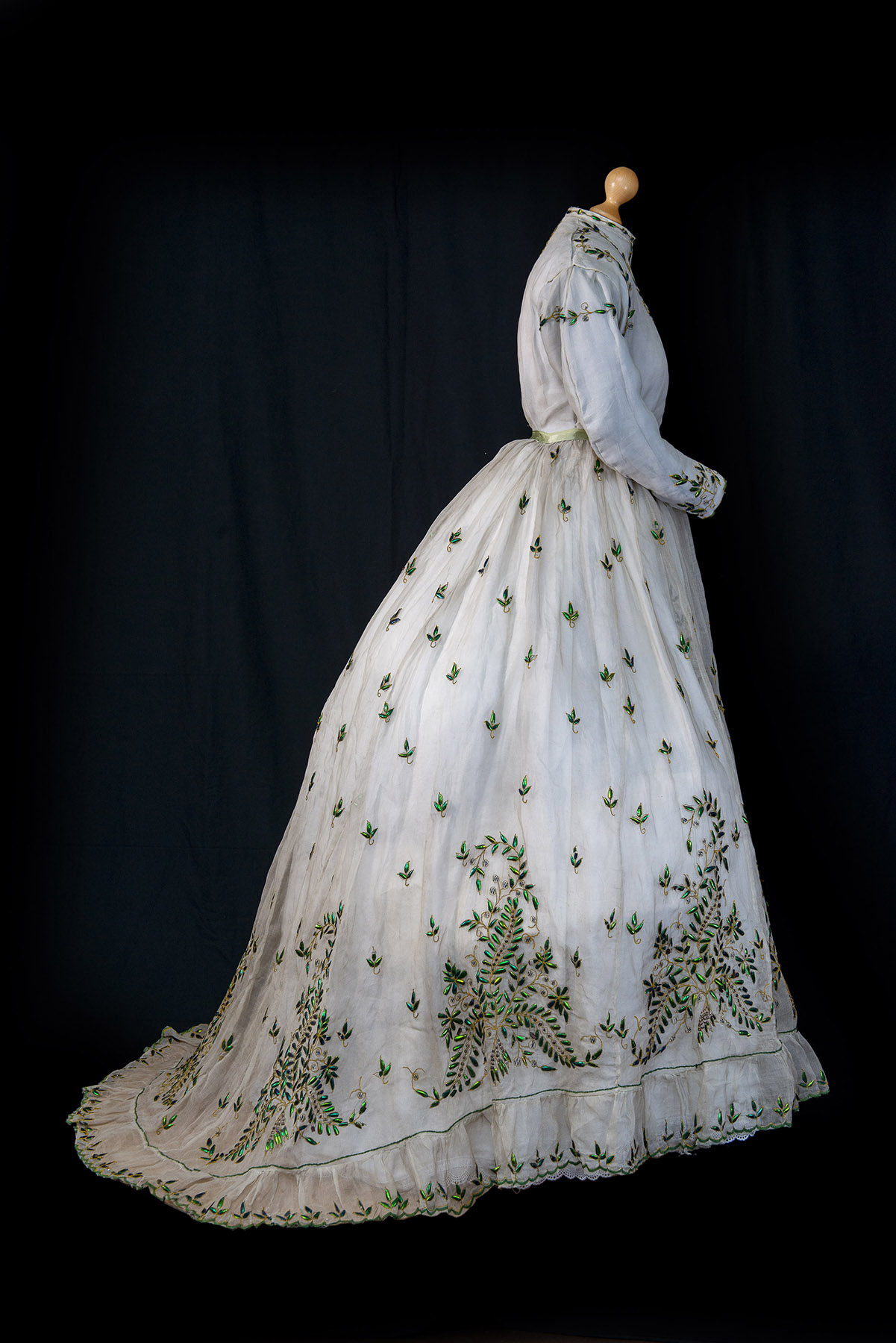 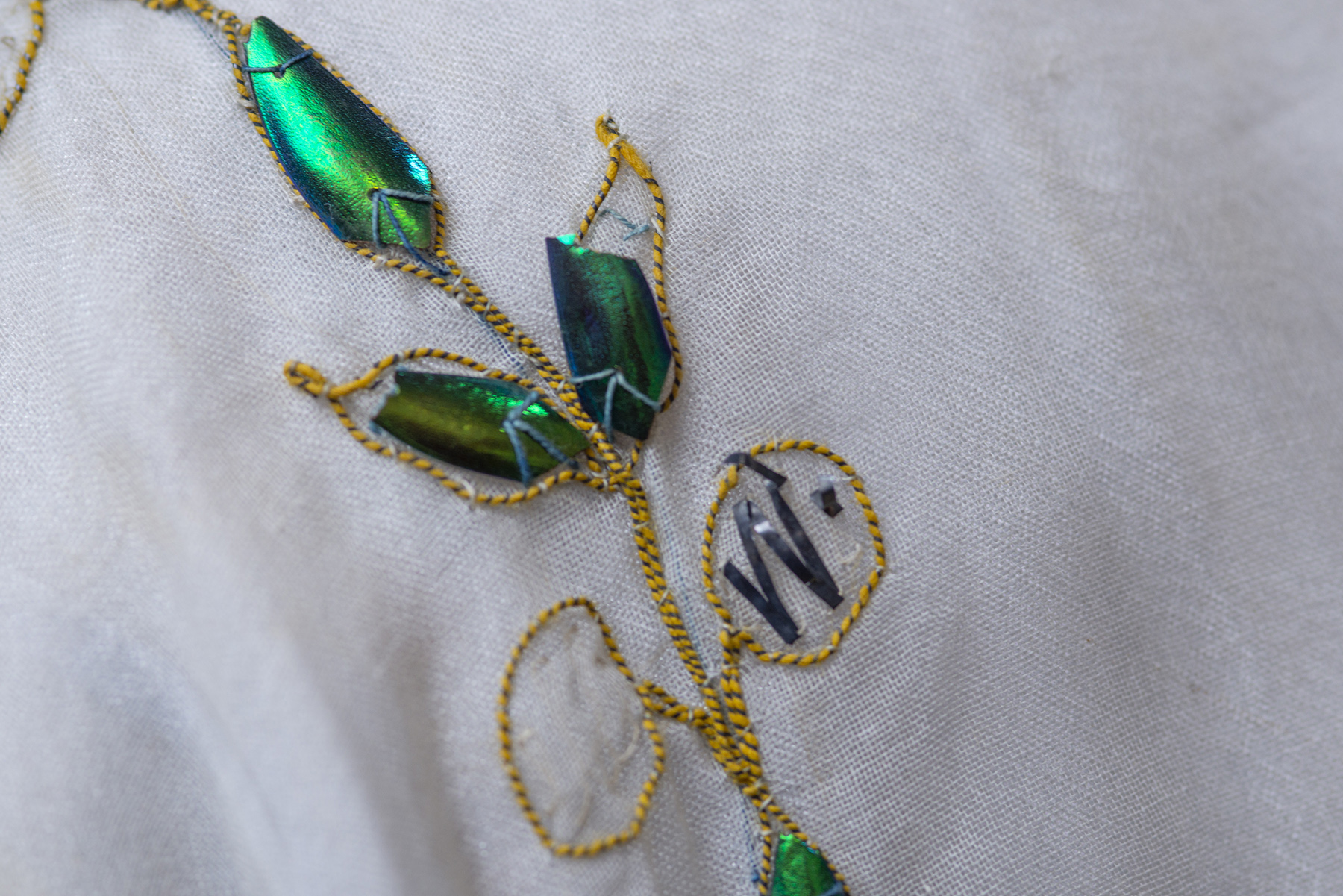 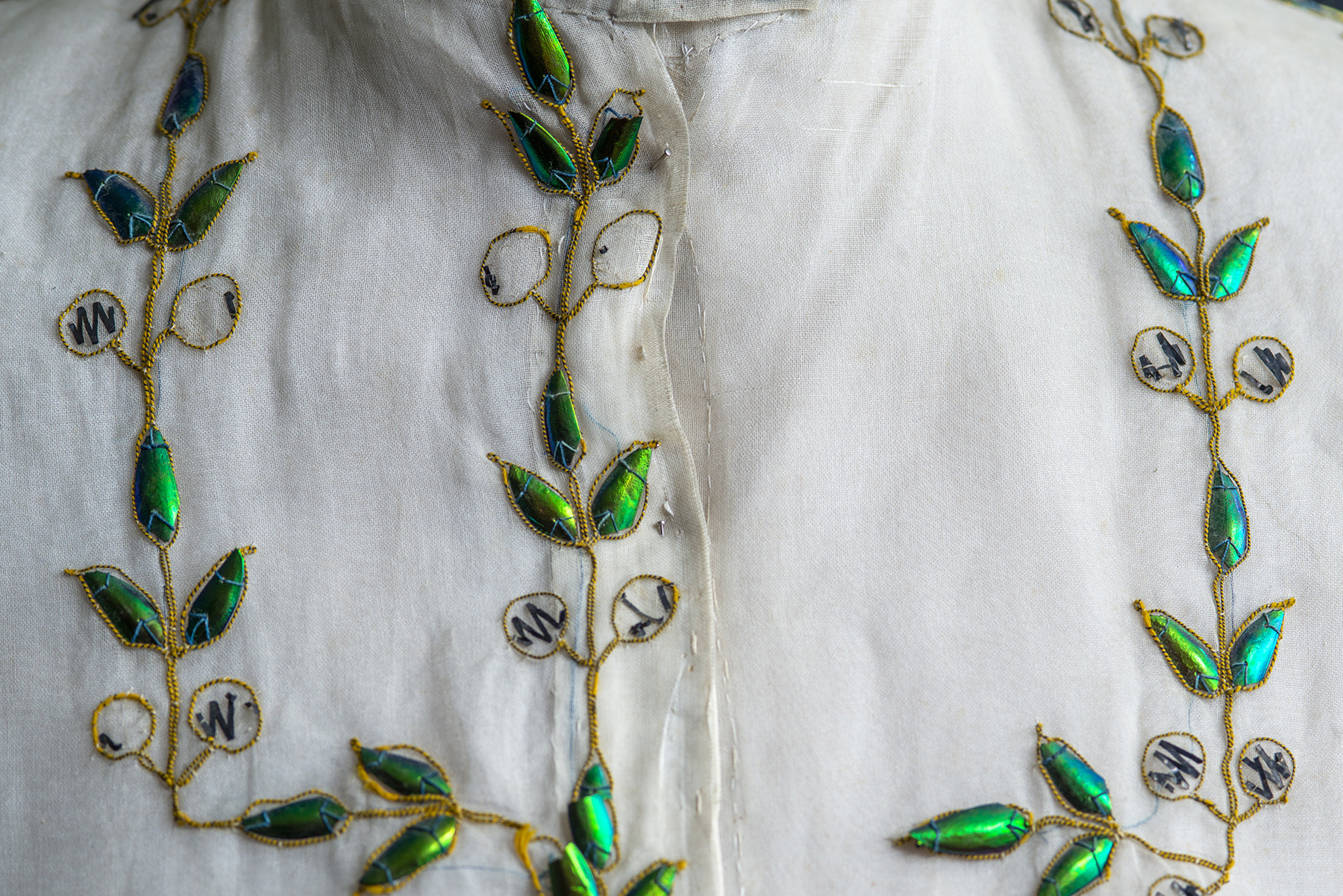 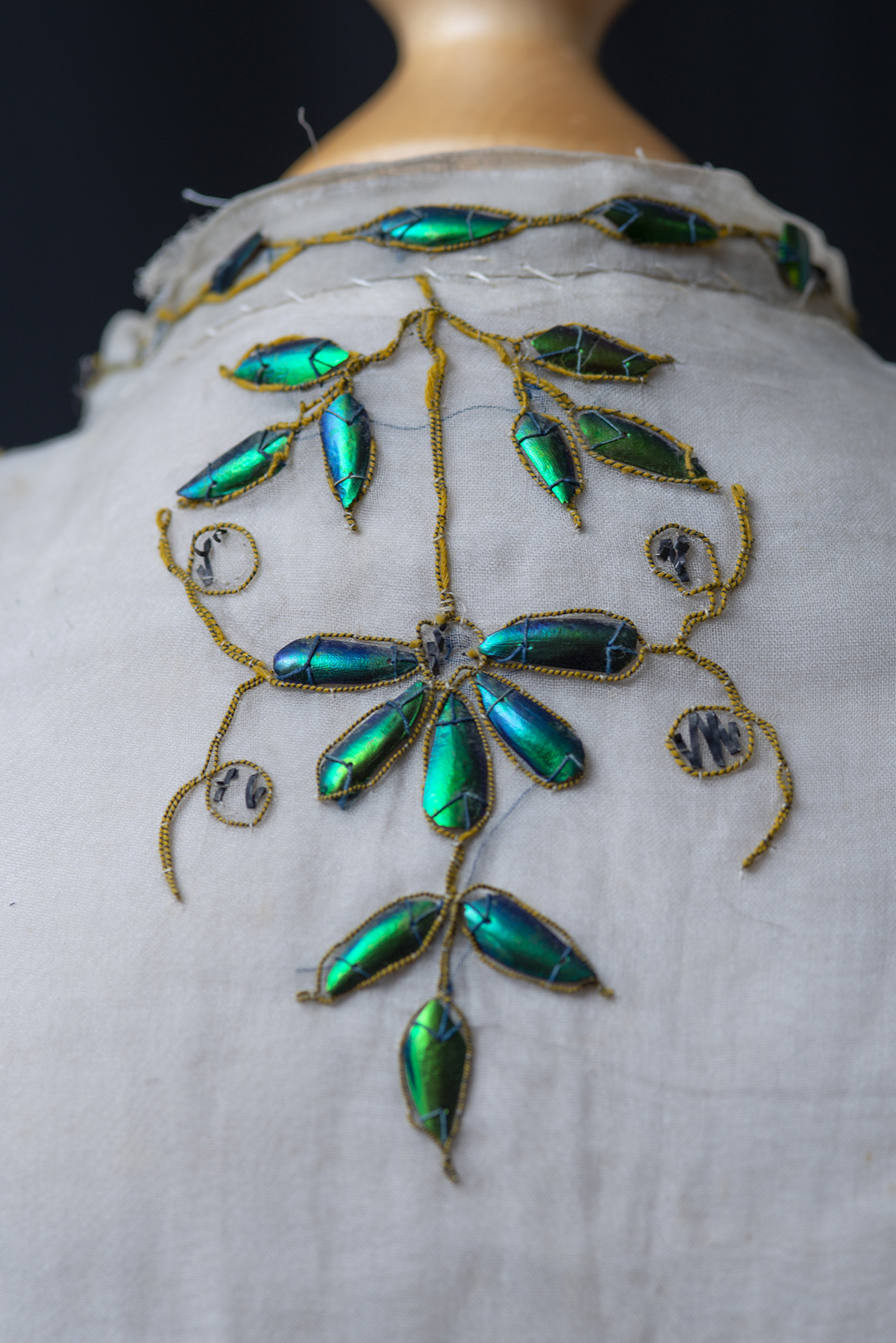 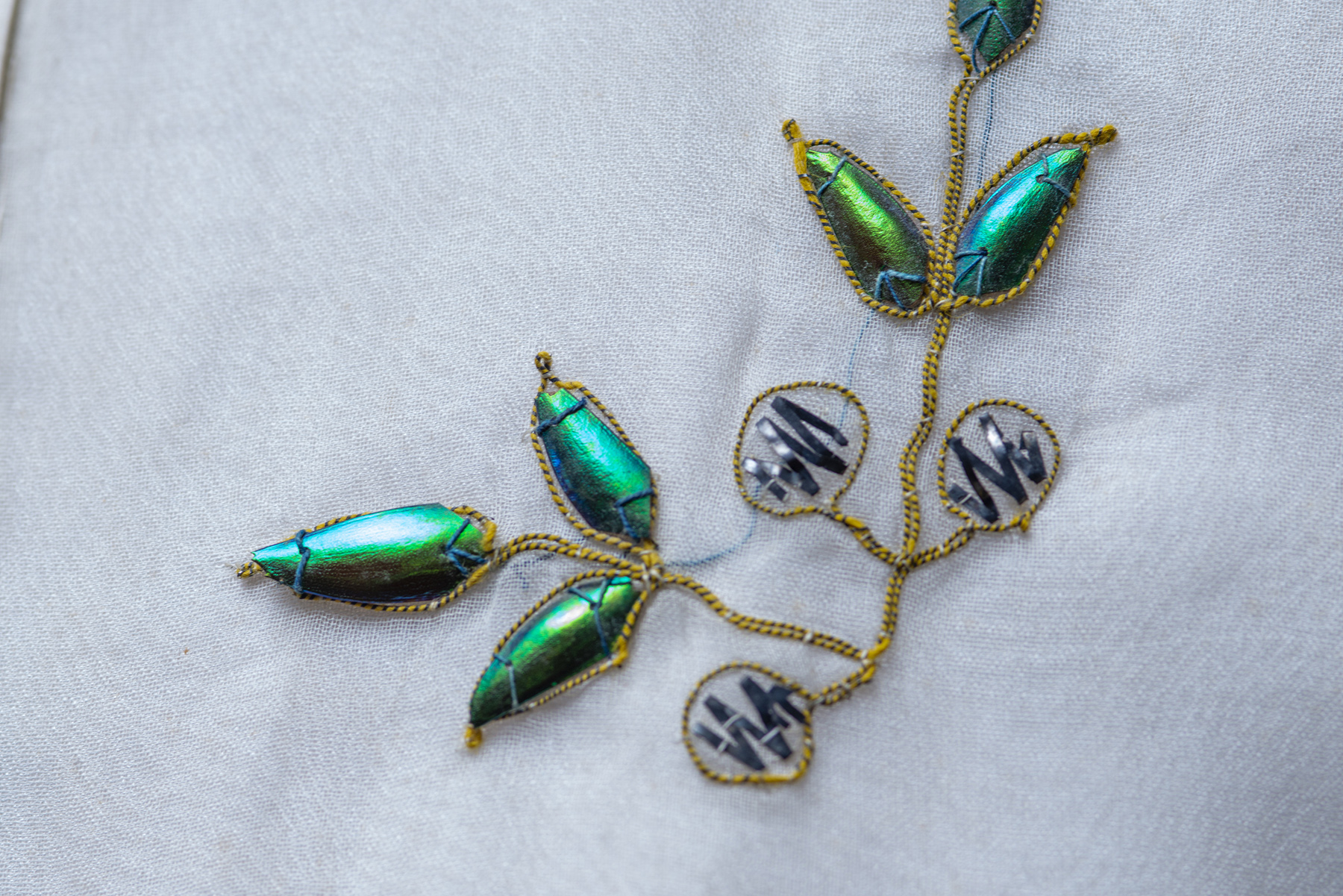 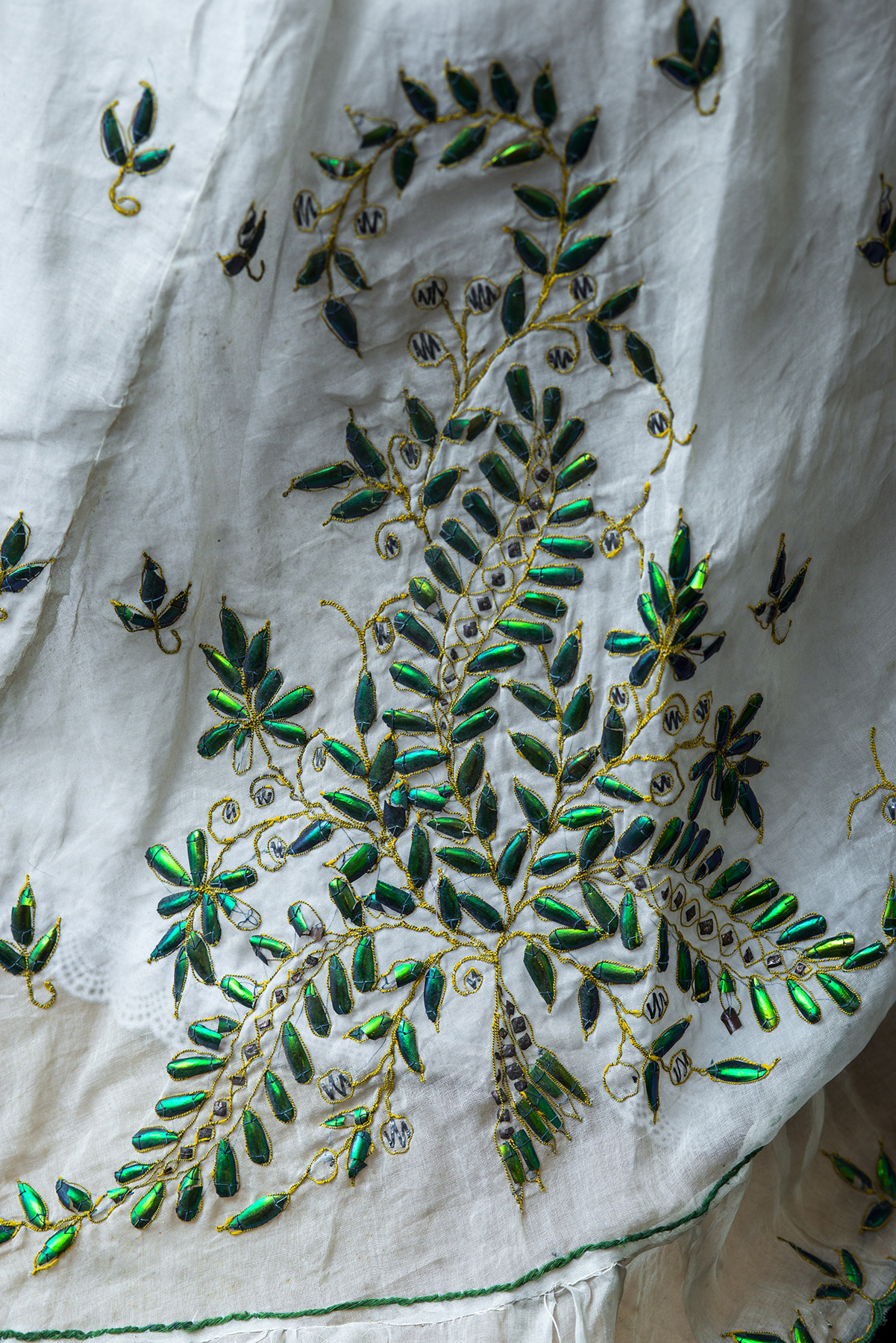 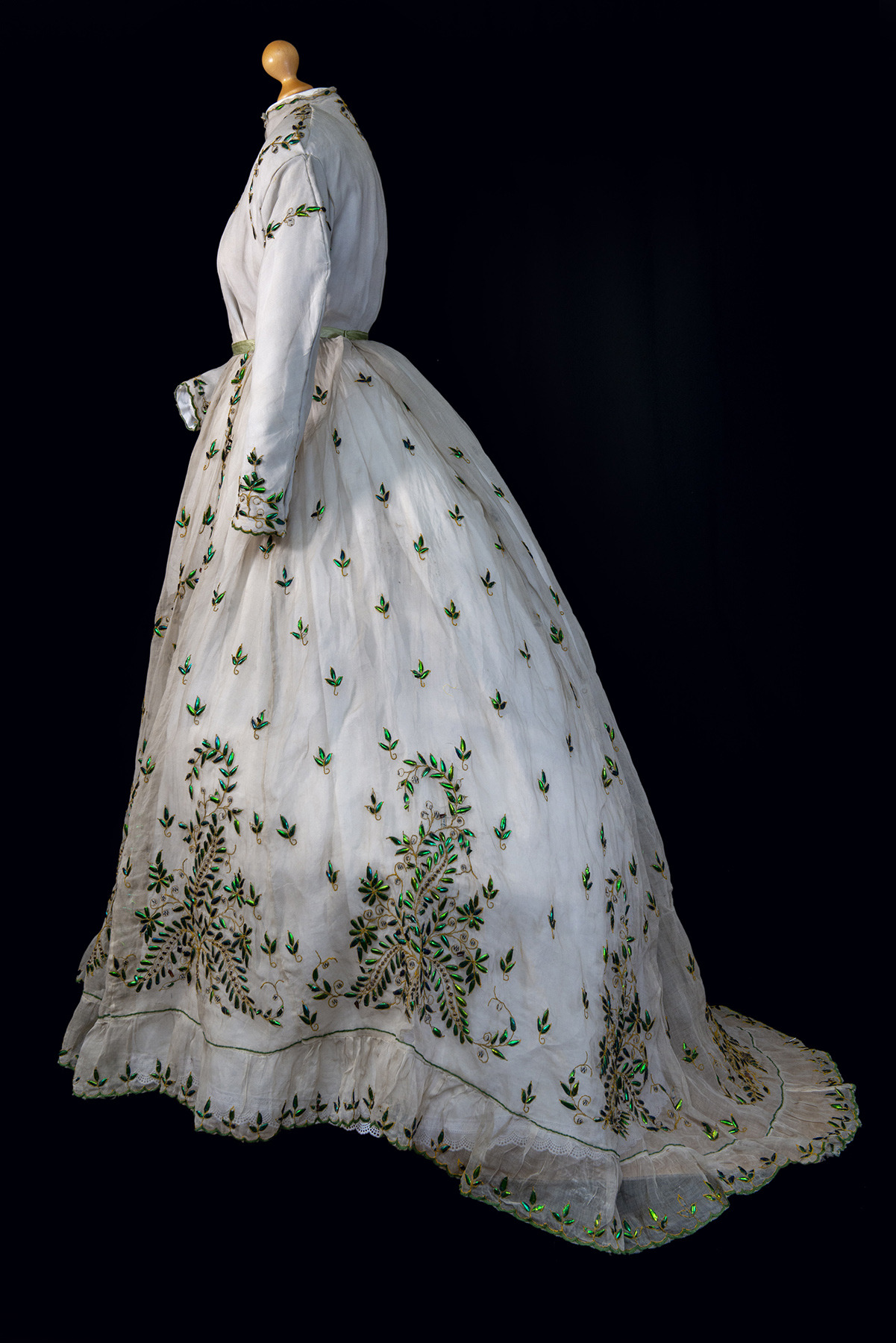 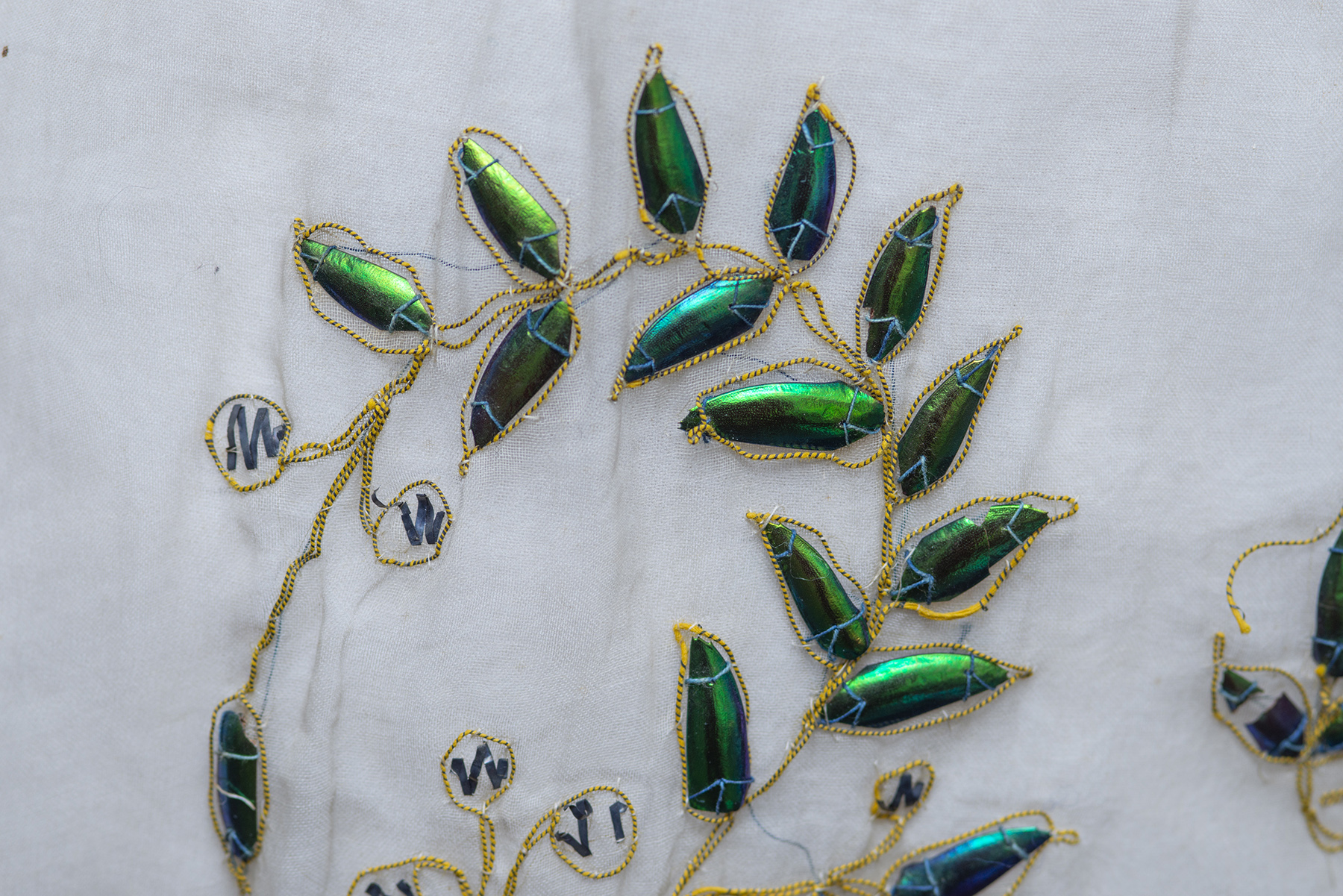 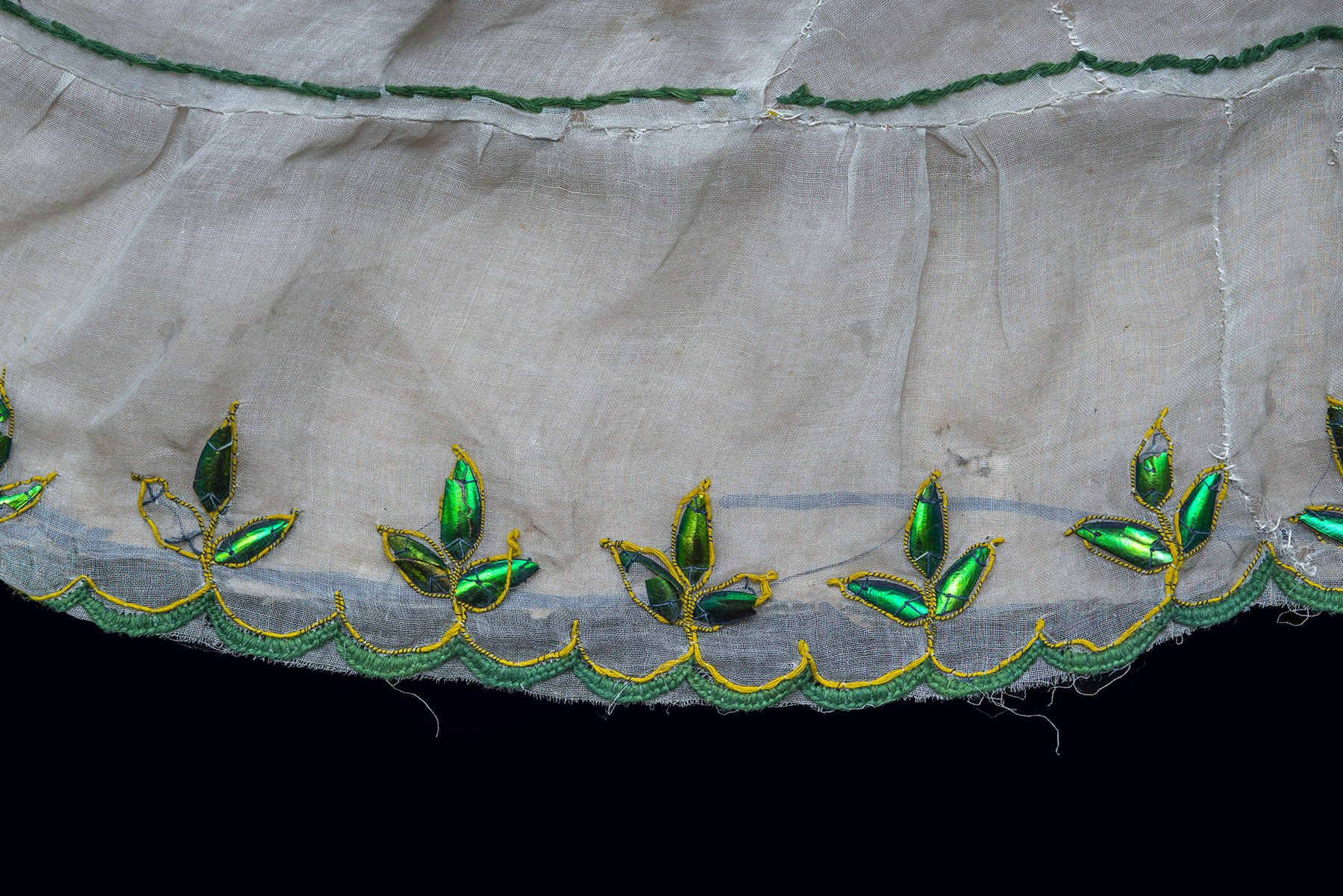 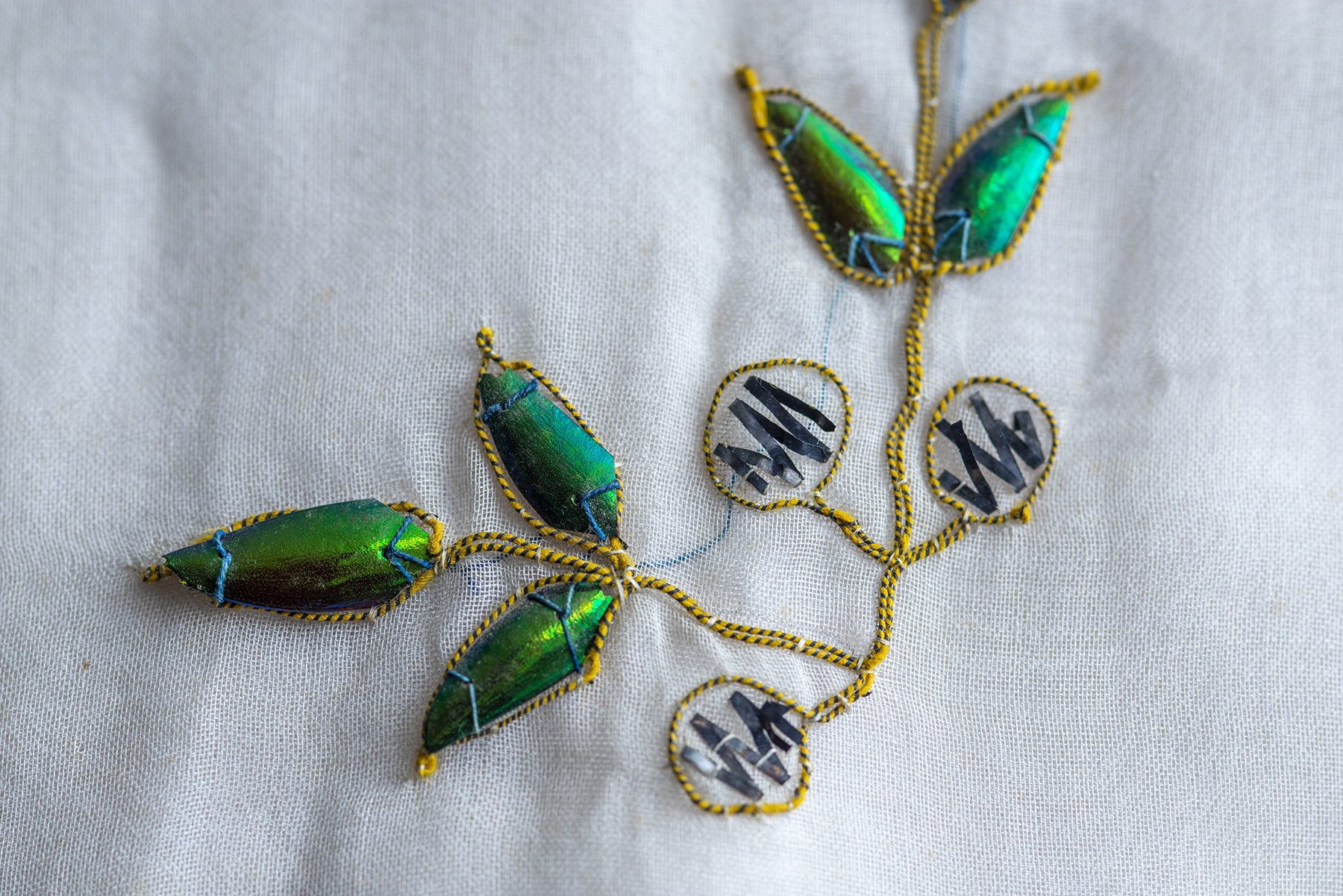 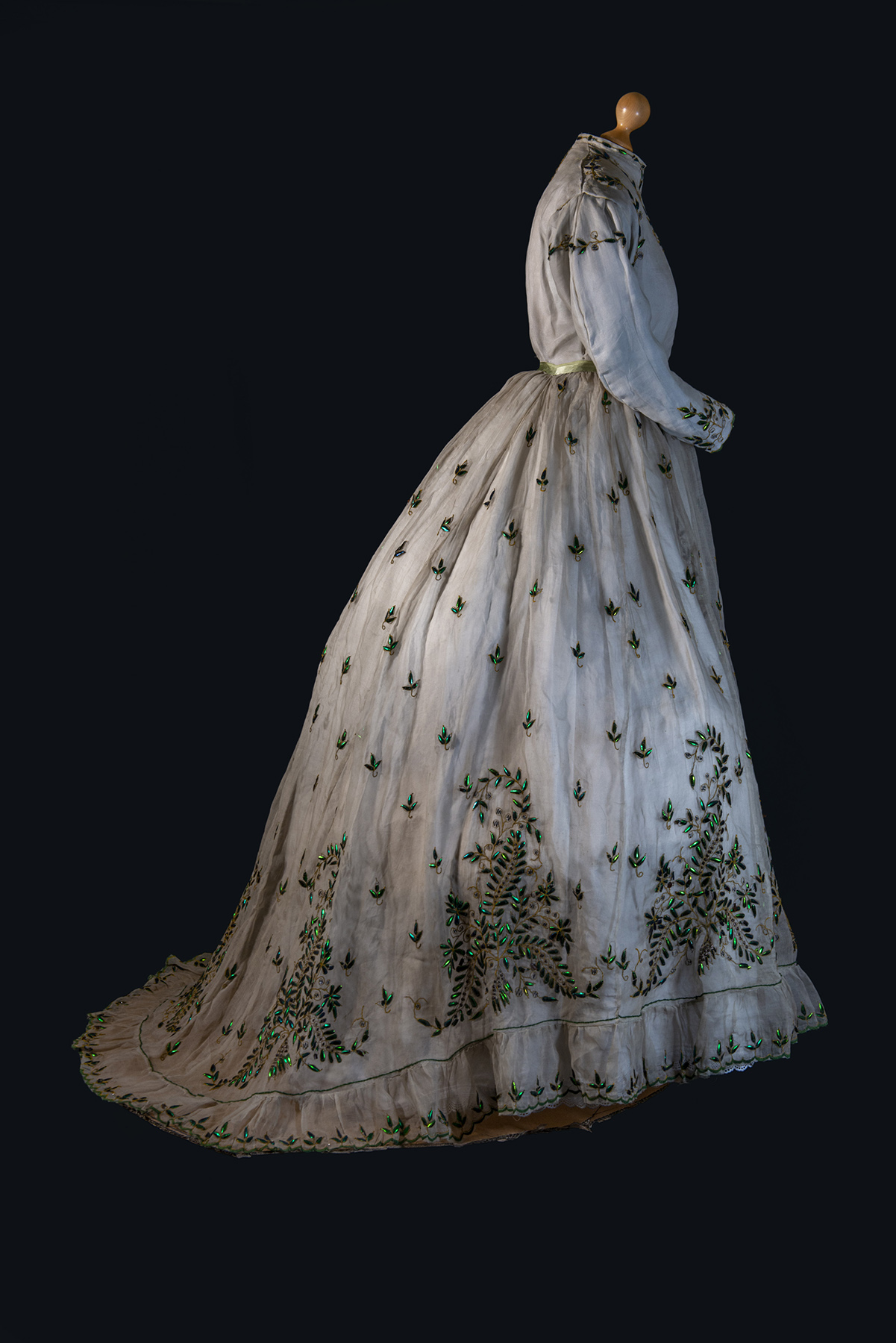 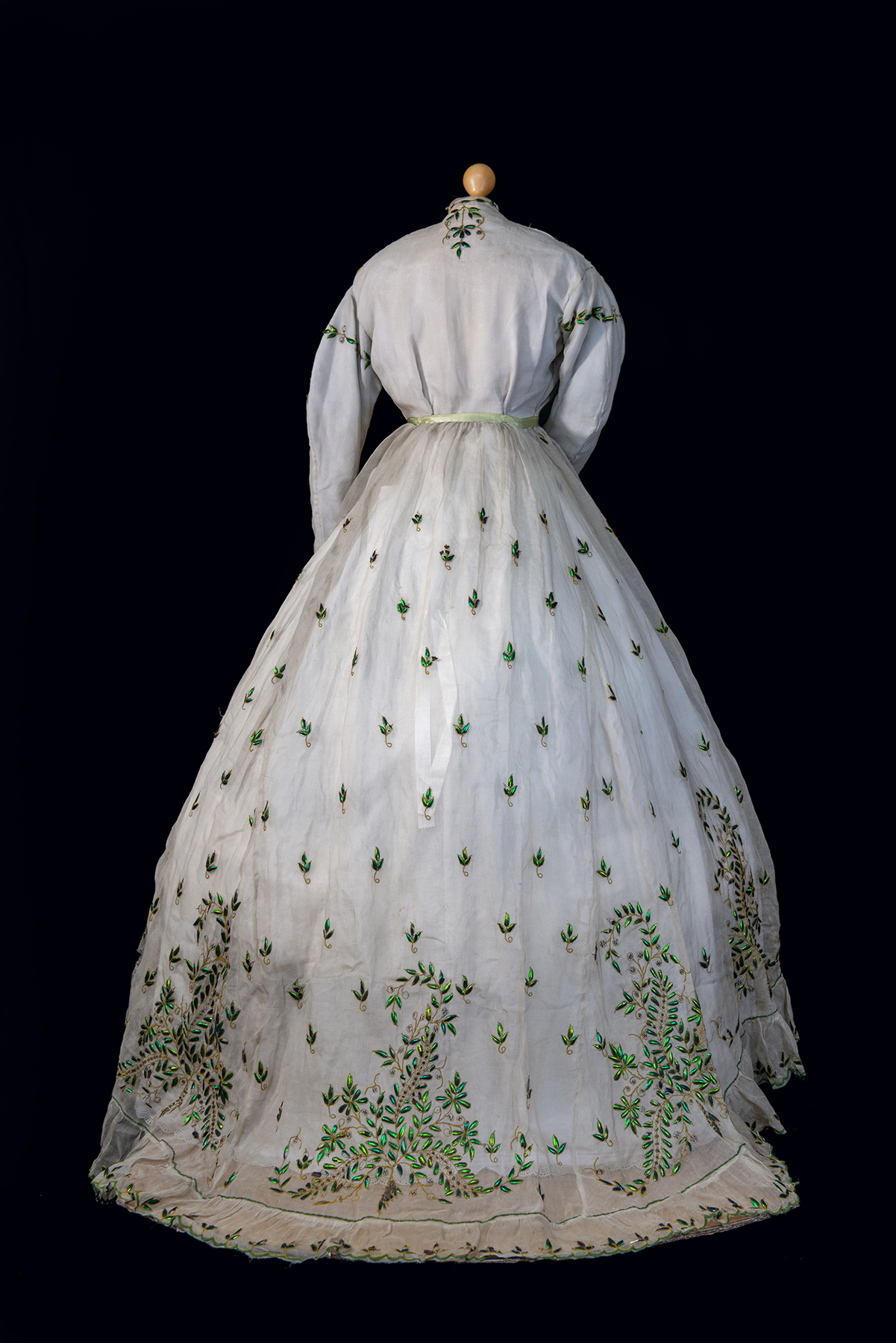 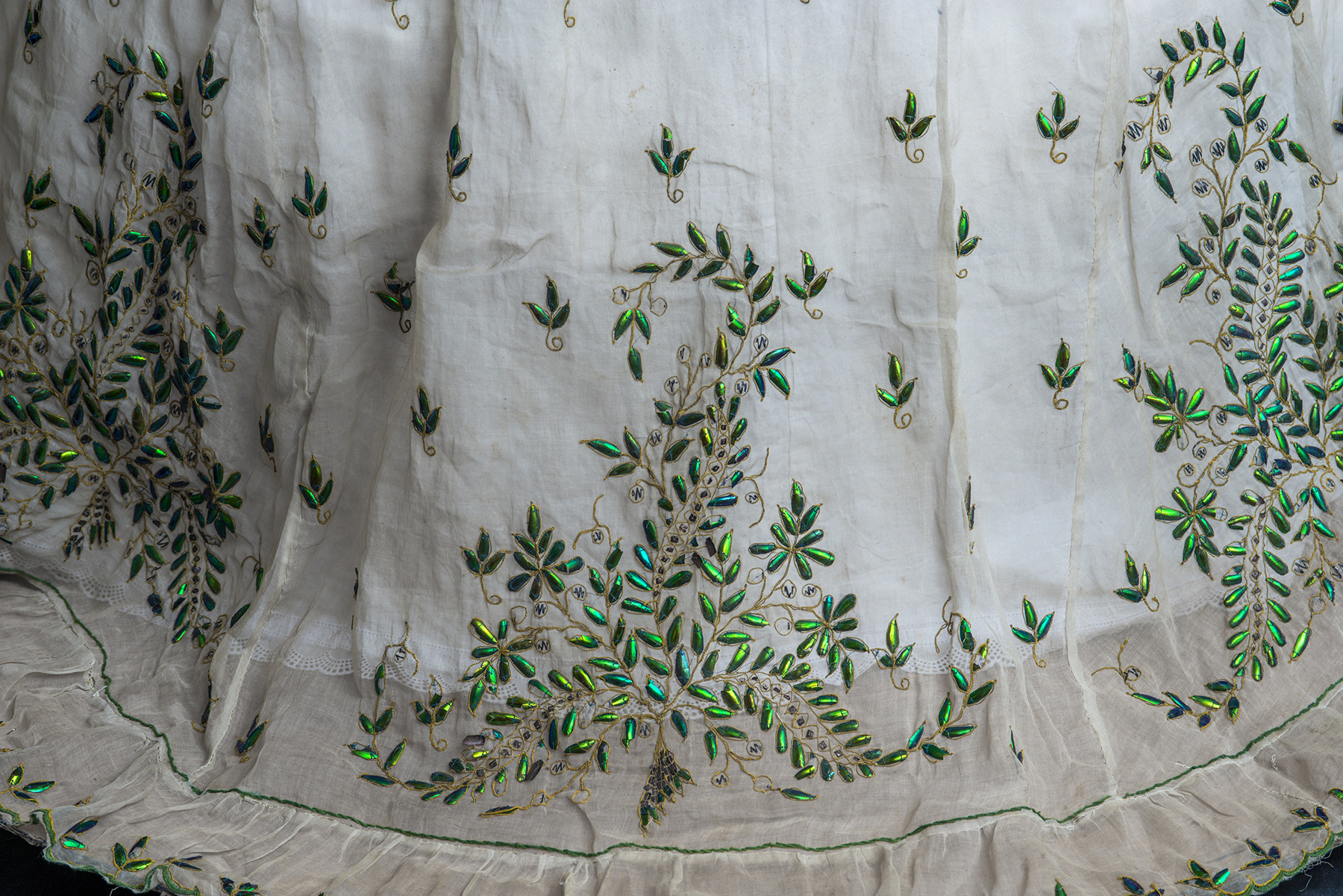 This light cotton dress belonged to Barbara Morrison, a Highland woman living in British India in the mid-1800s. The dress is beautifully embellished with Indian zardozi embroidery including shimmering jewel beetle wings. It is a rare example of a mid-Victorian beetle wing dress belonging to a Scotswoman and the only known example in the Highlands and Islands.

This dress is on display and the museum will open in June. Visit our website for more details and to plan your Highland Threads tour!

Barbara Morrison was born in Inverness, grew up at Broadford on Skye and worked in Glasgow as a dressmaker. After the sudden death of her first husband, she married a British Army officer, William Fitzhenry, from Dublin, Ireland, in Jersey in 1856. They spent some years living in Winchester, England and moved to India when William was stationed there as the quartermaster of the 3rd/60th Rifles. They also took their baby daughter with them on the journey. At the time, the state of Madras was governed by Lord Francis Napier who later chaired the Napier Commission, tasked with investigating land ownership and the circumstances of crofters across the Highlands and Islands. It reported in 1884 and despite opposition from both landowners and politicians, Napier’s report had a profound influence on the land reform movement in the Highlands.

The dress was commissioned by Barbara to wear at a social function, most probably a dinner or evening ball. We do not know where the embroidery was purchased, although it is in a similar style to zardozi embroidery produced in Chennai (Madras). The circumference of the bottom of the skirt is more than three hundred centimetres and originally the dress would have been worn with a large crinoline.

The dress is embellished with zardozi embroidery, an ancient technique using precious metals and silks practised across Central Asia for thousands of years. It is covered with patterns created by gilt sequins, silver foil strips and jewel beetle wings outlined with embroidery made of yellow silk wrapped around thin silver wire. Jewel beetle wings have been used for embroidery, jewellery and embellishment across Asia for many centuries. There are several species in the ‘Buprestidae‘ or jewel beetle family with ‘Sternocera aequisignata‘ being most commonly used in beetlewing embroidery. The adult ‘Sternocera aequisignata‘ has a life cycle of one to three weeks and the hard outer wing casings called ‘elytra’ are collected after the beetles die naturally. The elytra are steamed for about five minutes, pierced usually with two holes and sometimes trimmed ready for use in embroidery.

The dress seems to have been altered at some point in the mid twentieth century and the bodice now has a lining made of synthetic material and an old cotton bedsheet. Barbara and William’s descendants donated the dress to West Highland Museum in 1993 along with an Indian shawl. The beetlewing dress is a symbol of how just how far Highlanders travelled in the 1800s, especially those connected with the British military. The dress also powerfully illustrates that it was not just Highland men who made the journey to India, but also women. 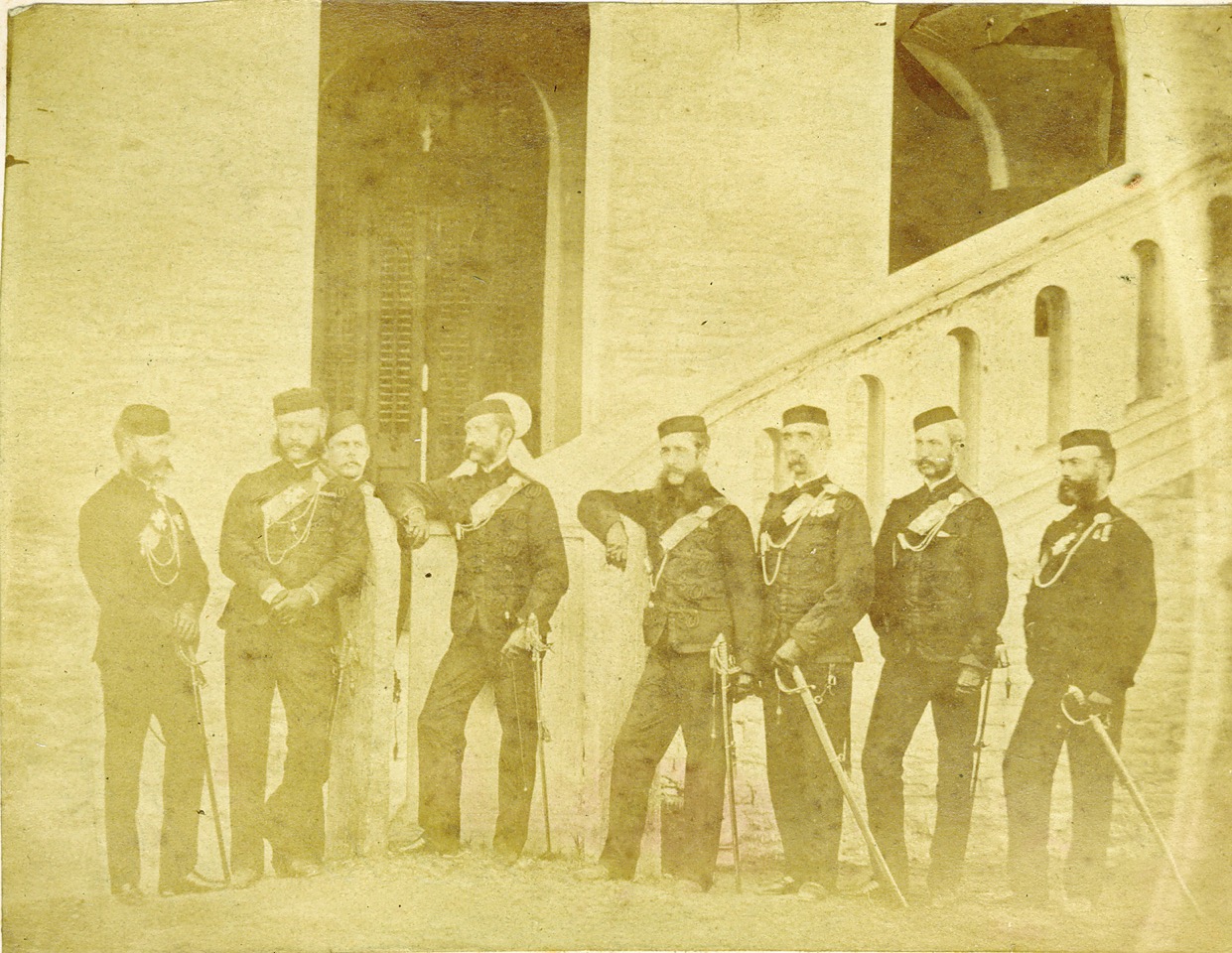 The West Highland Museum is one of the oldest museums in the Highlands, Fort William.

Help WEST HIGHLAND MUSEUM work through the pandemic closures by becoming a member.