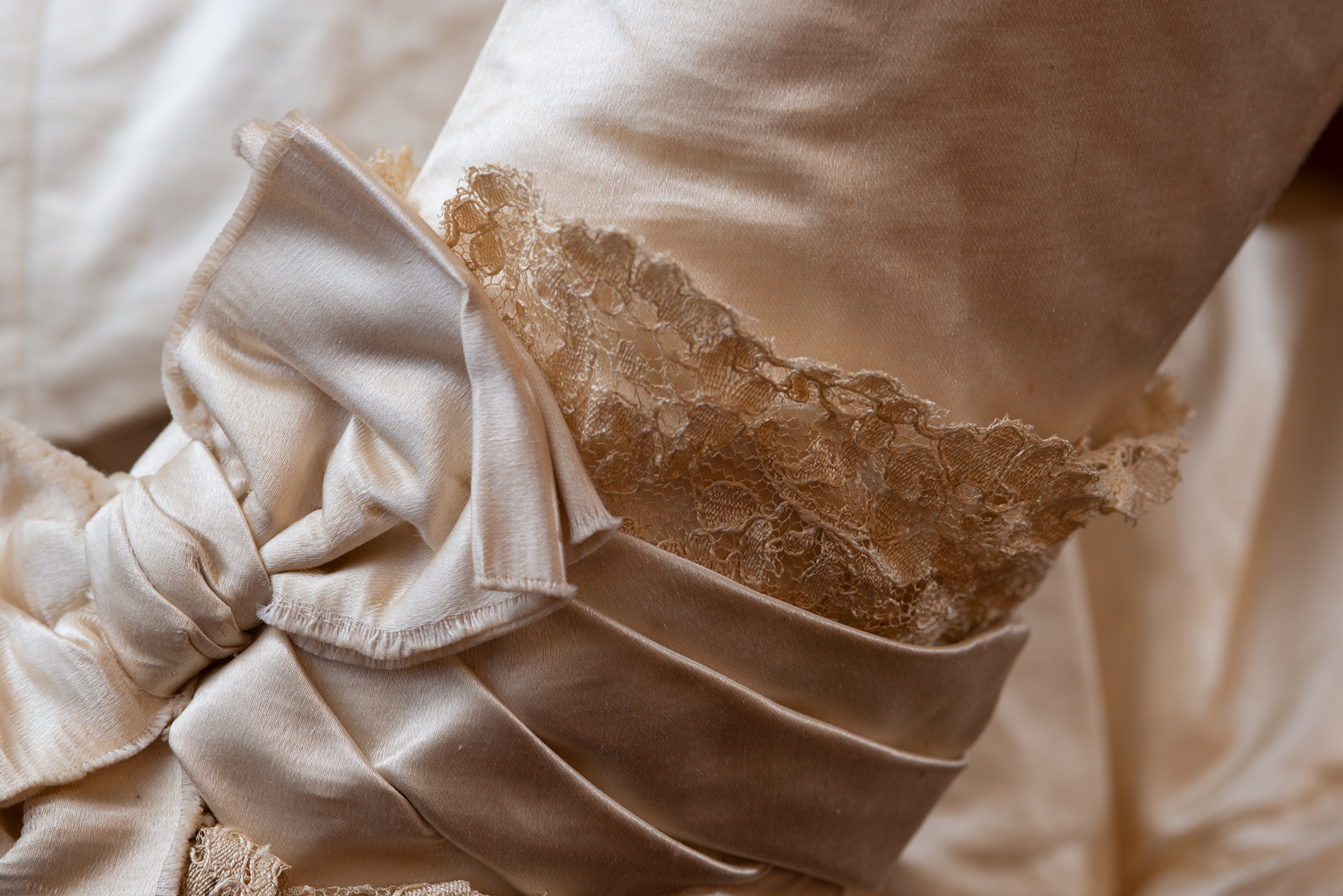 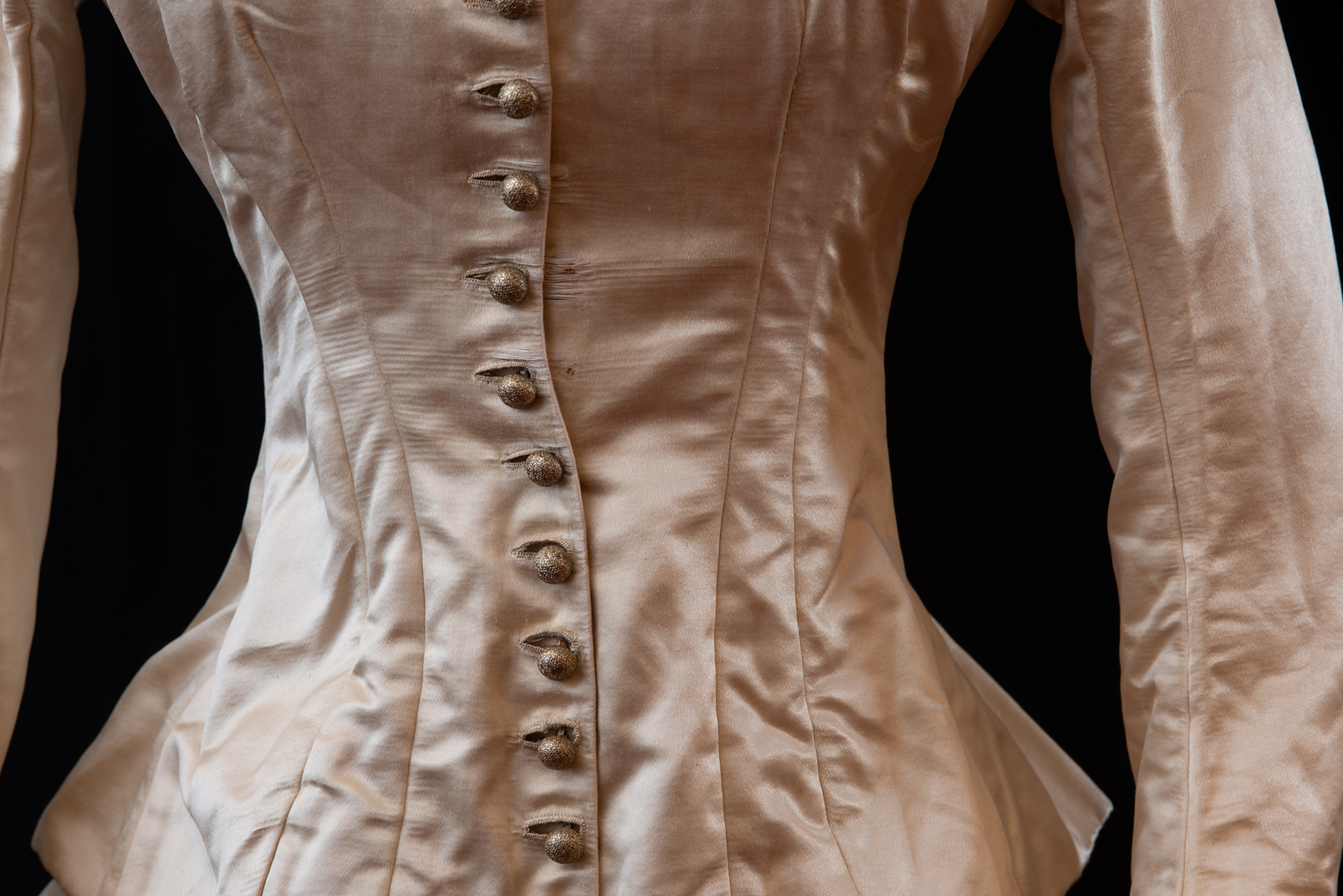 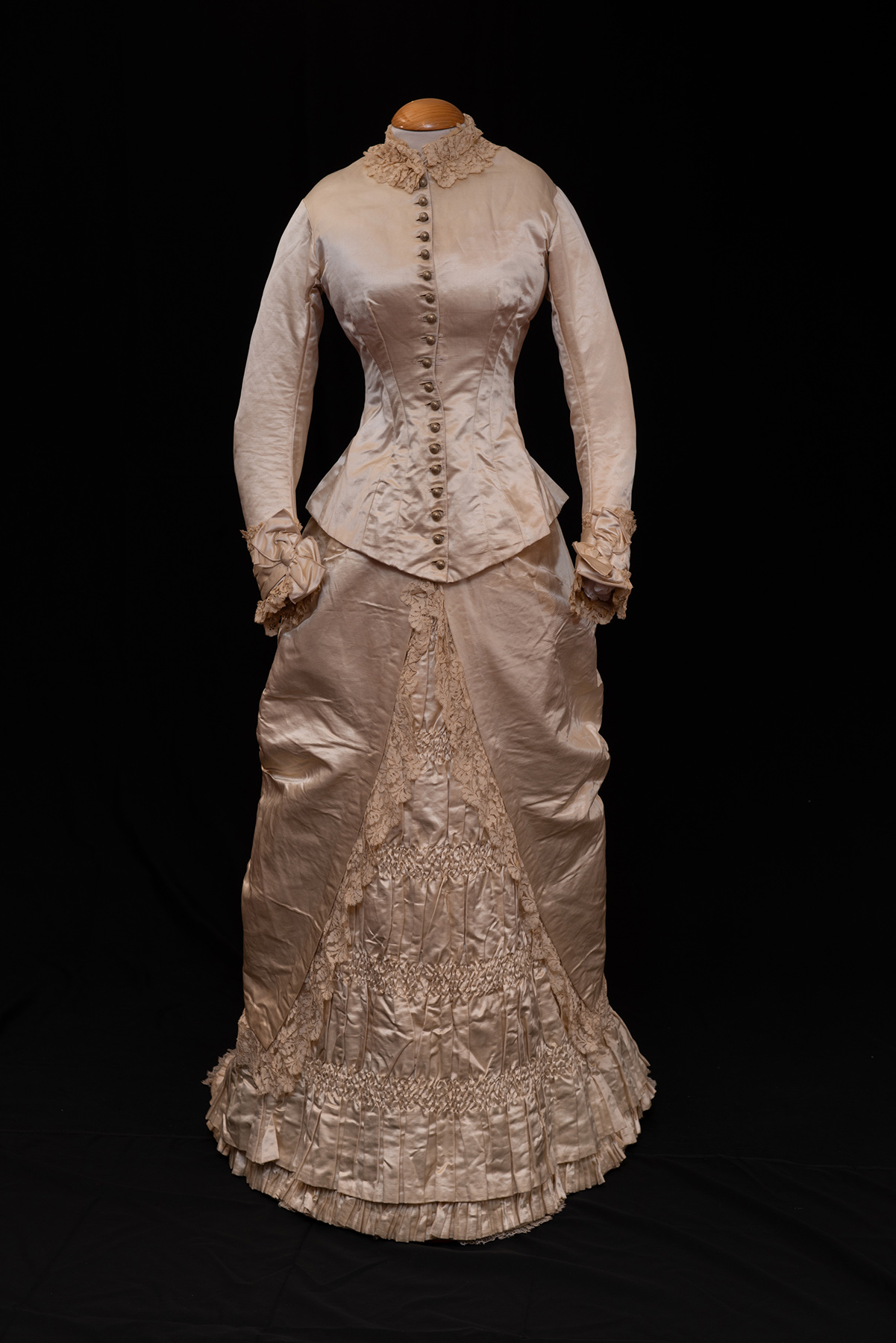 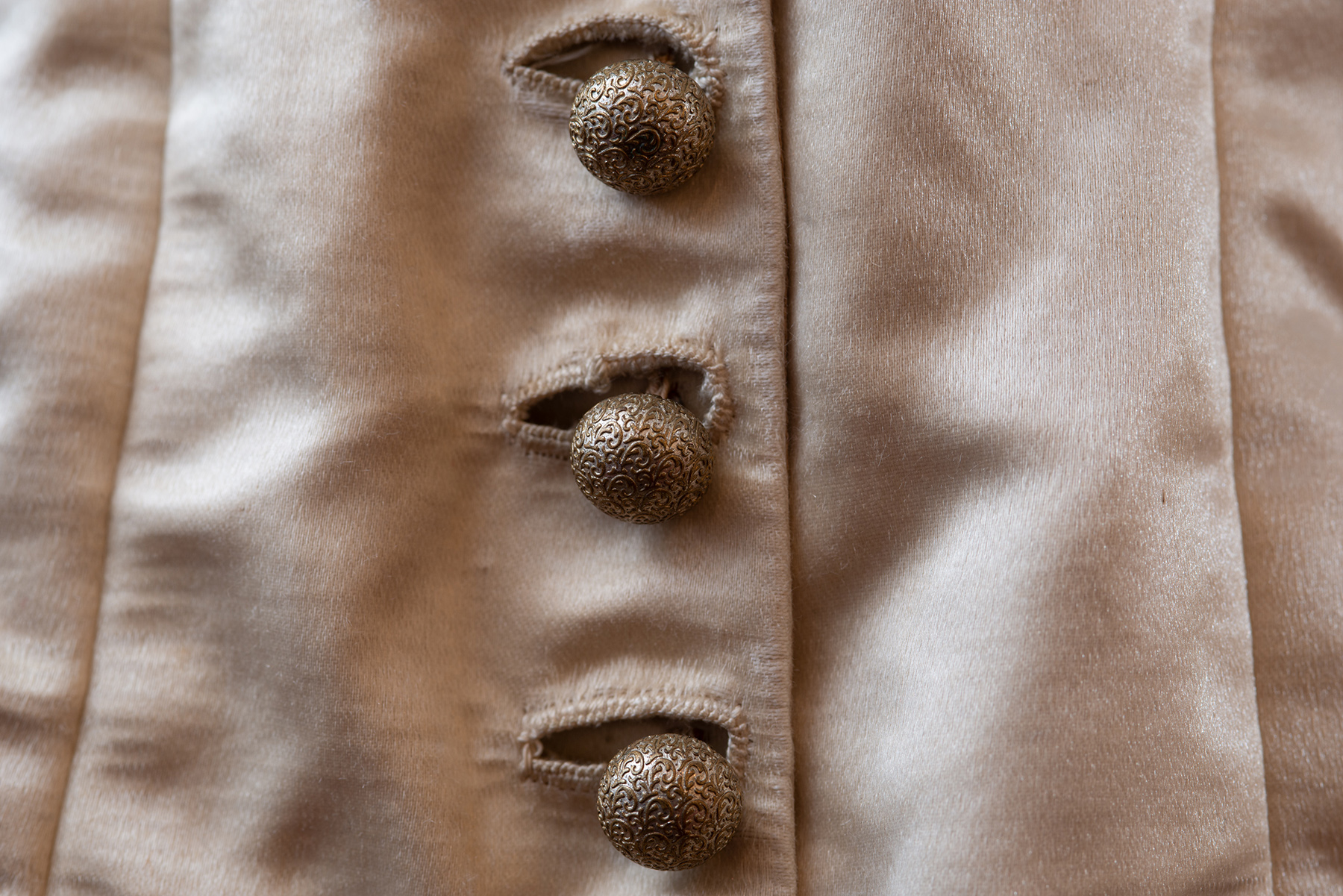 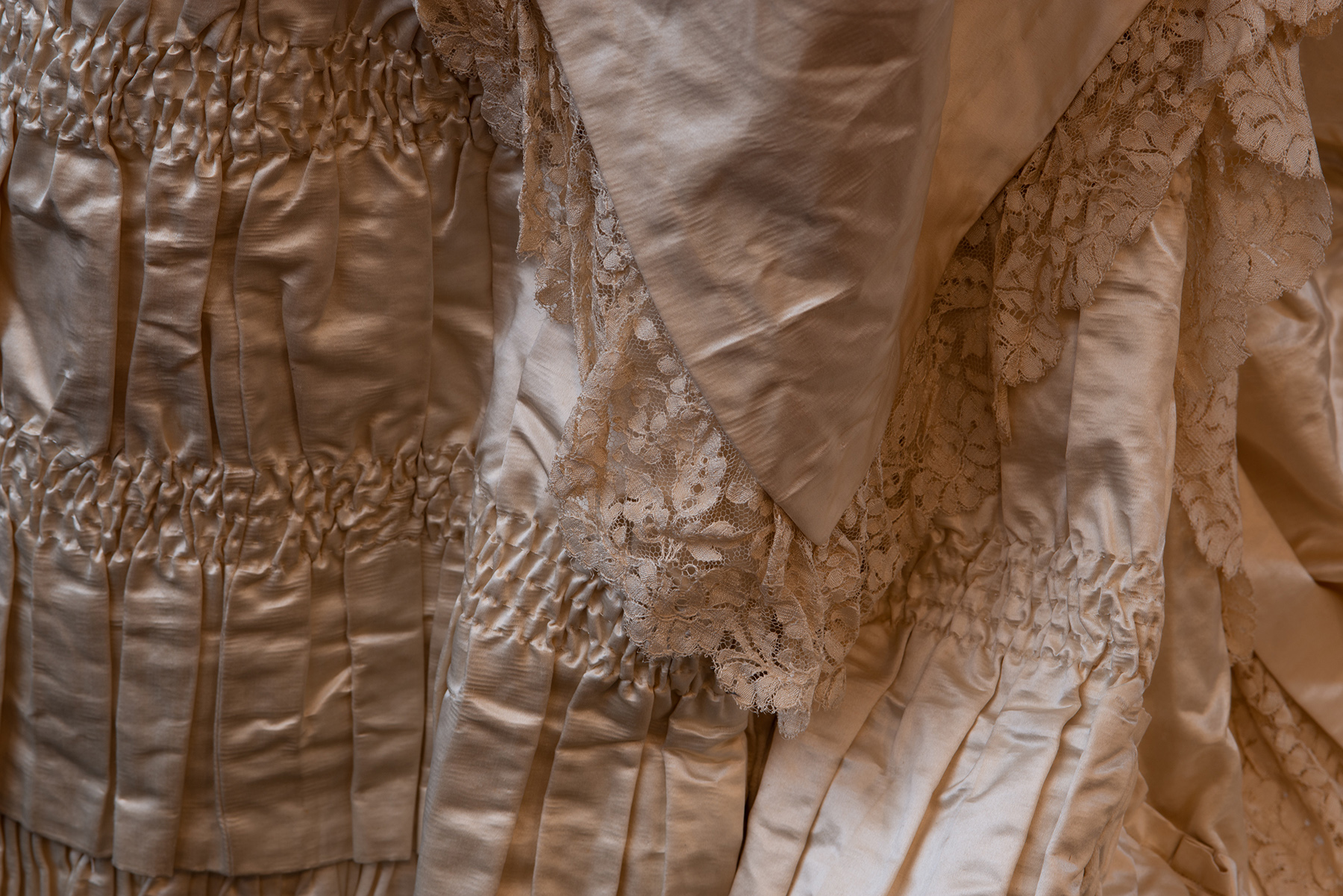 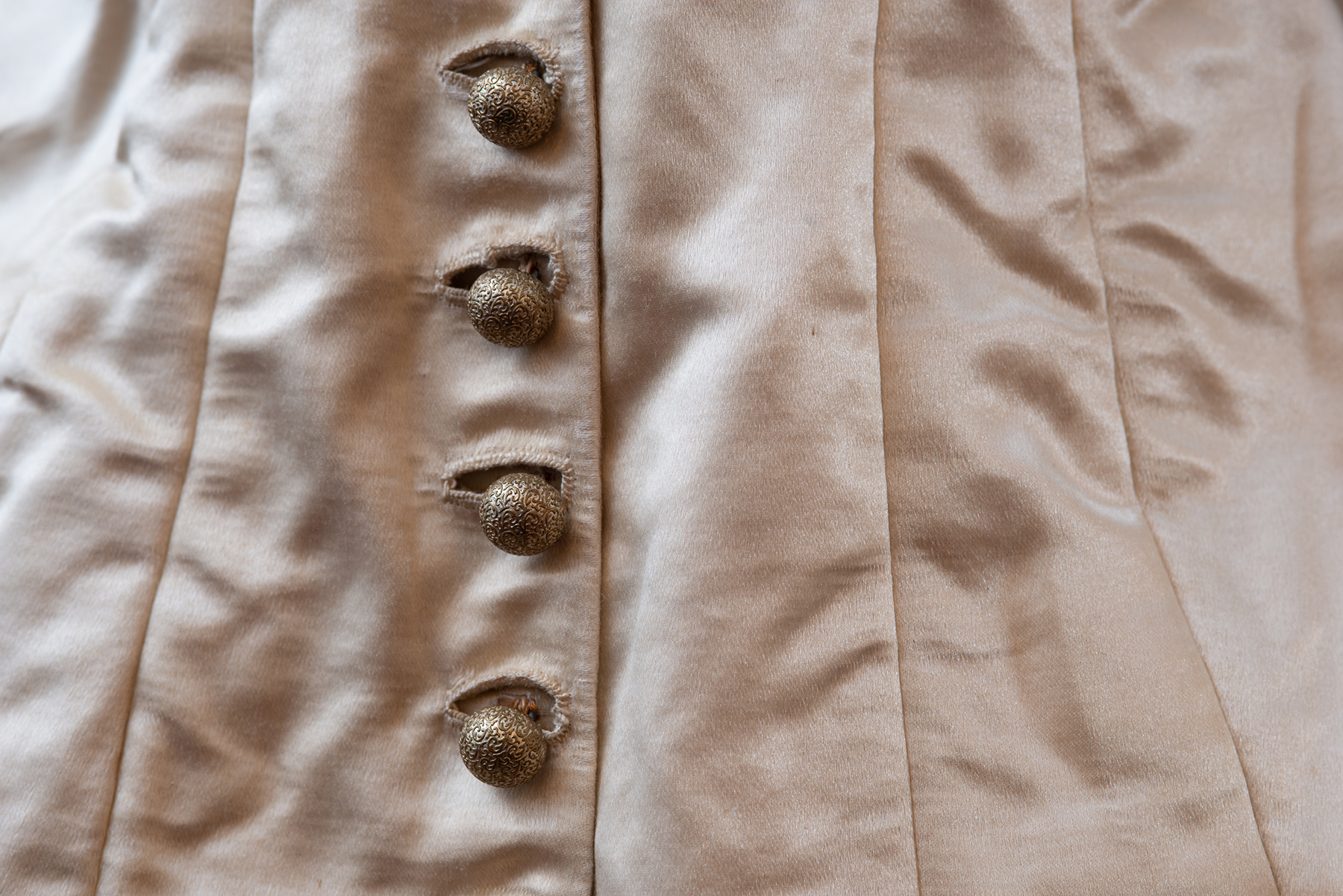 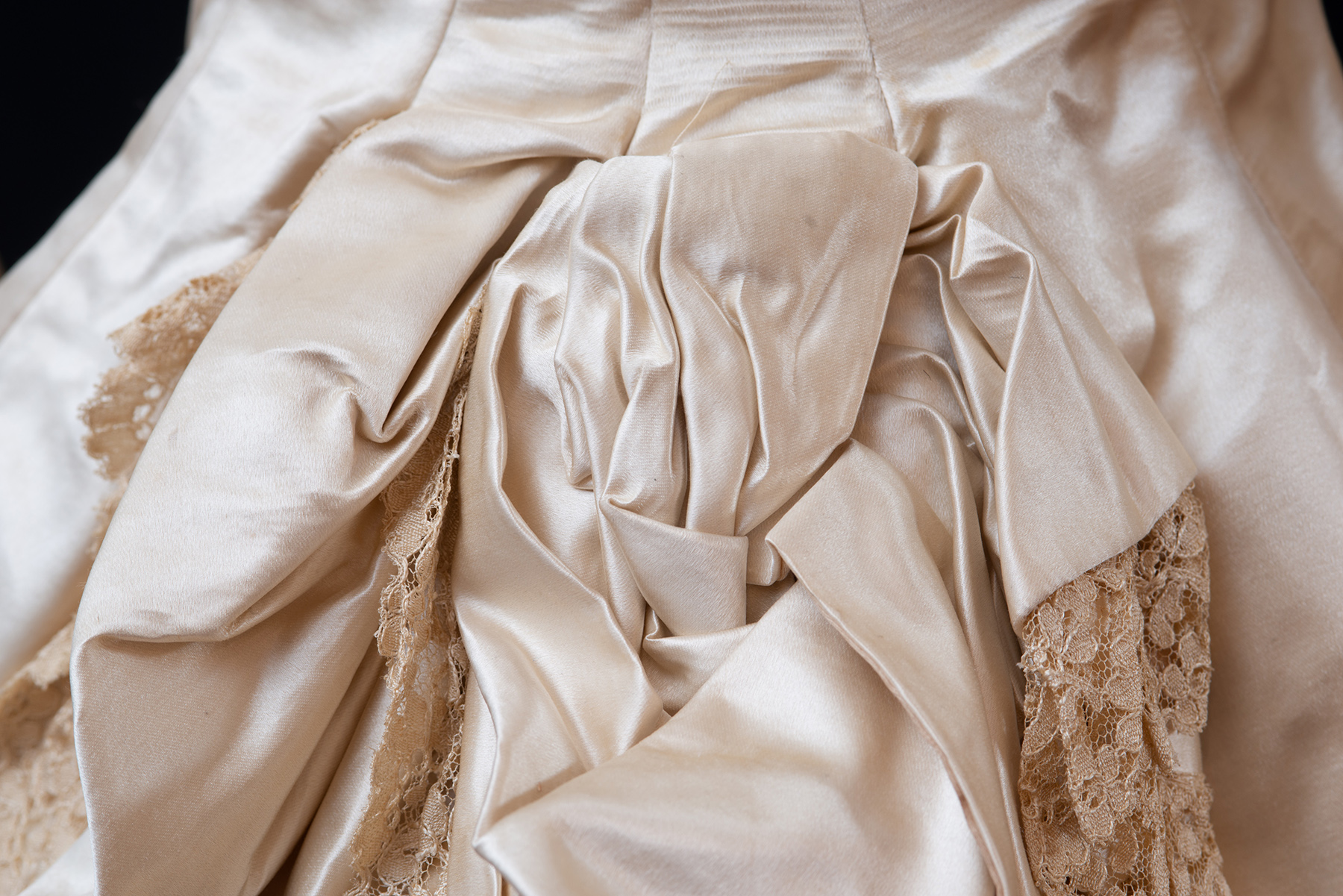 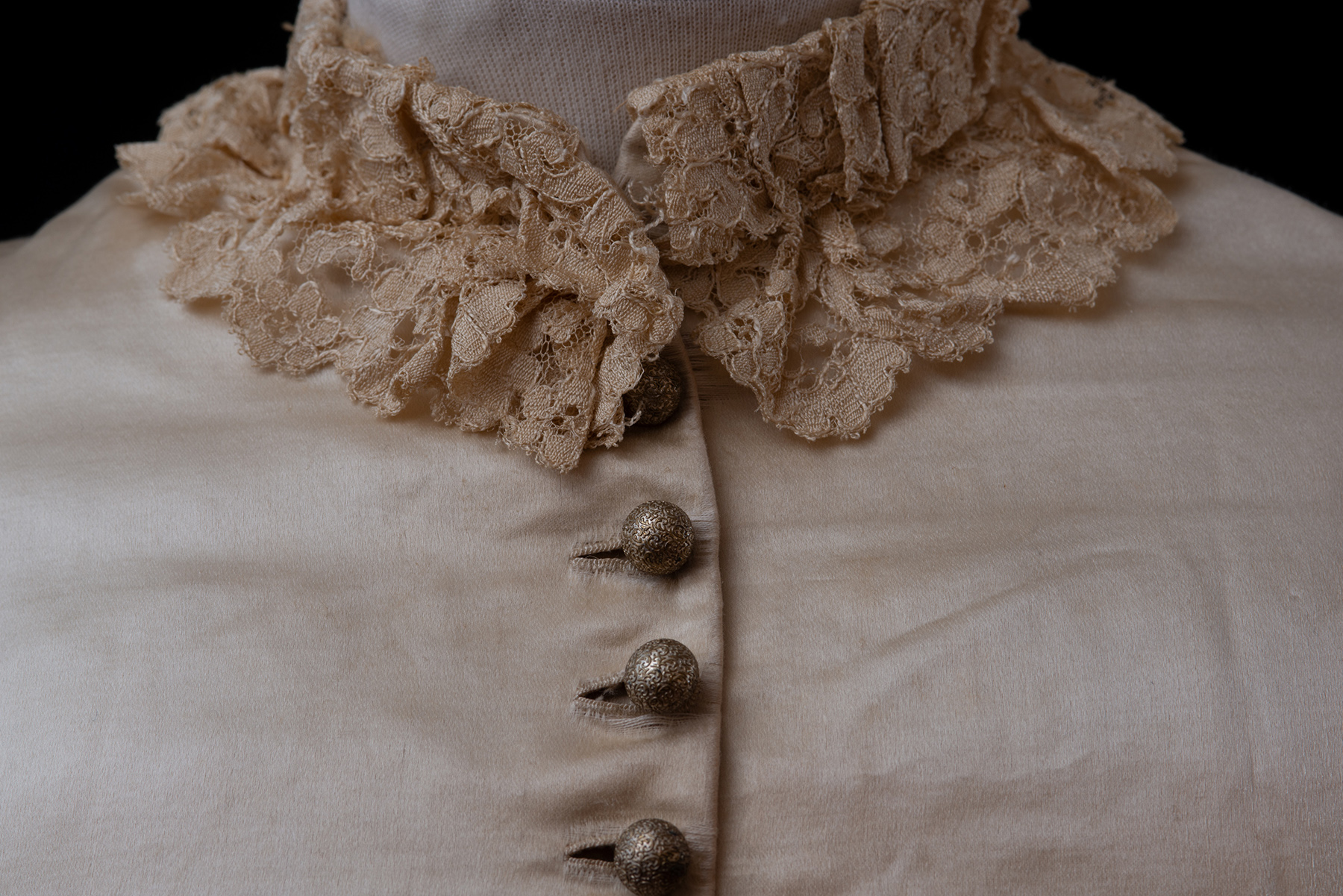 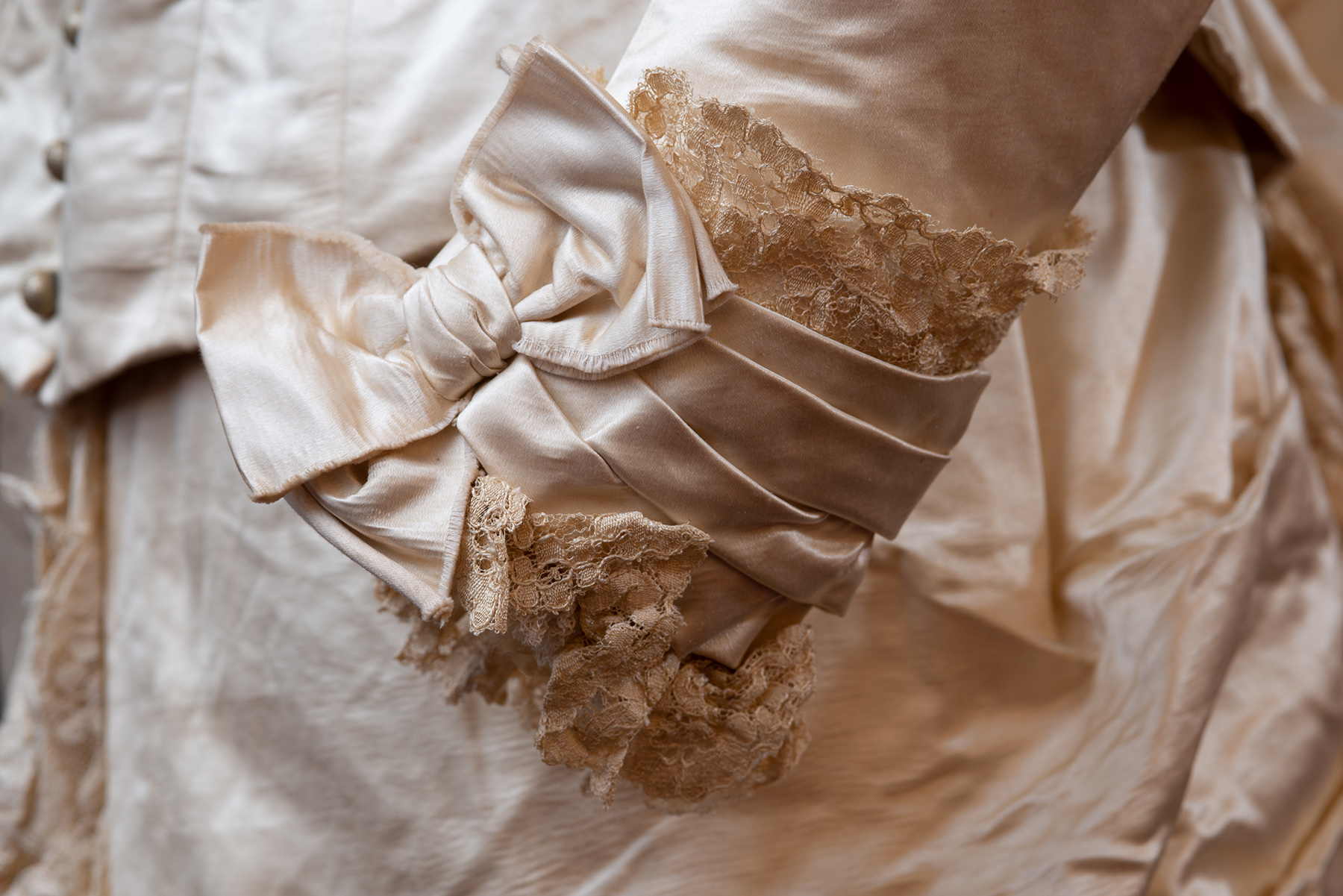 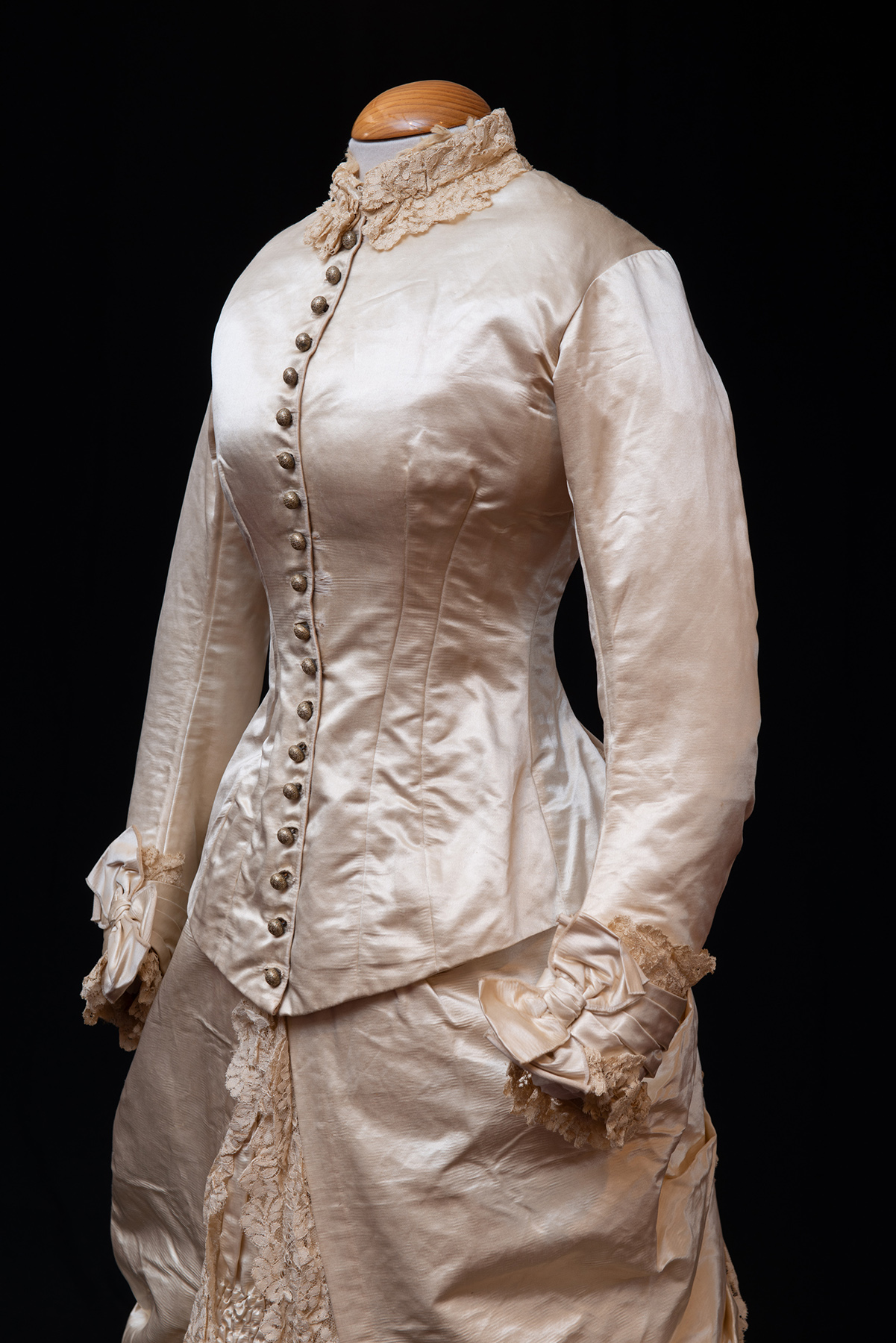 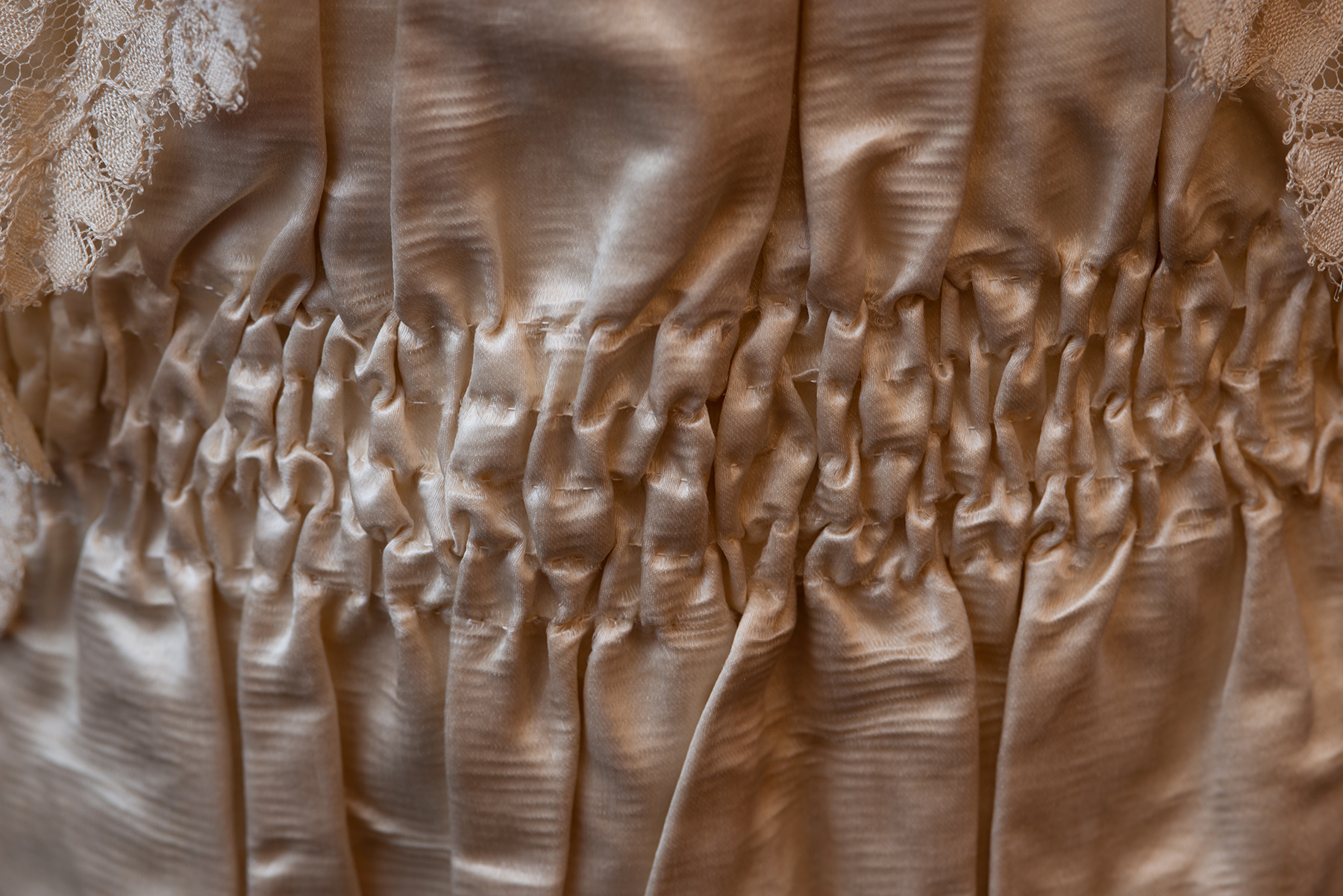 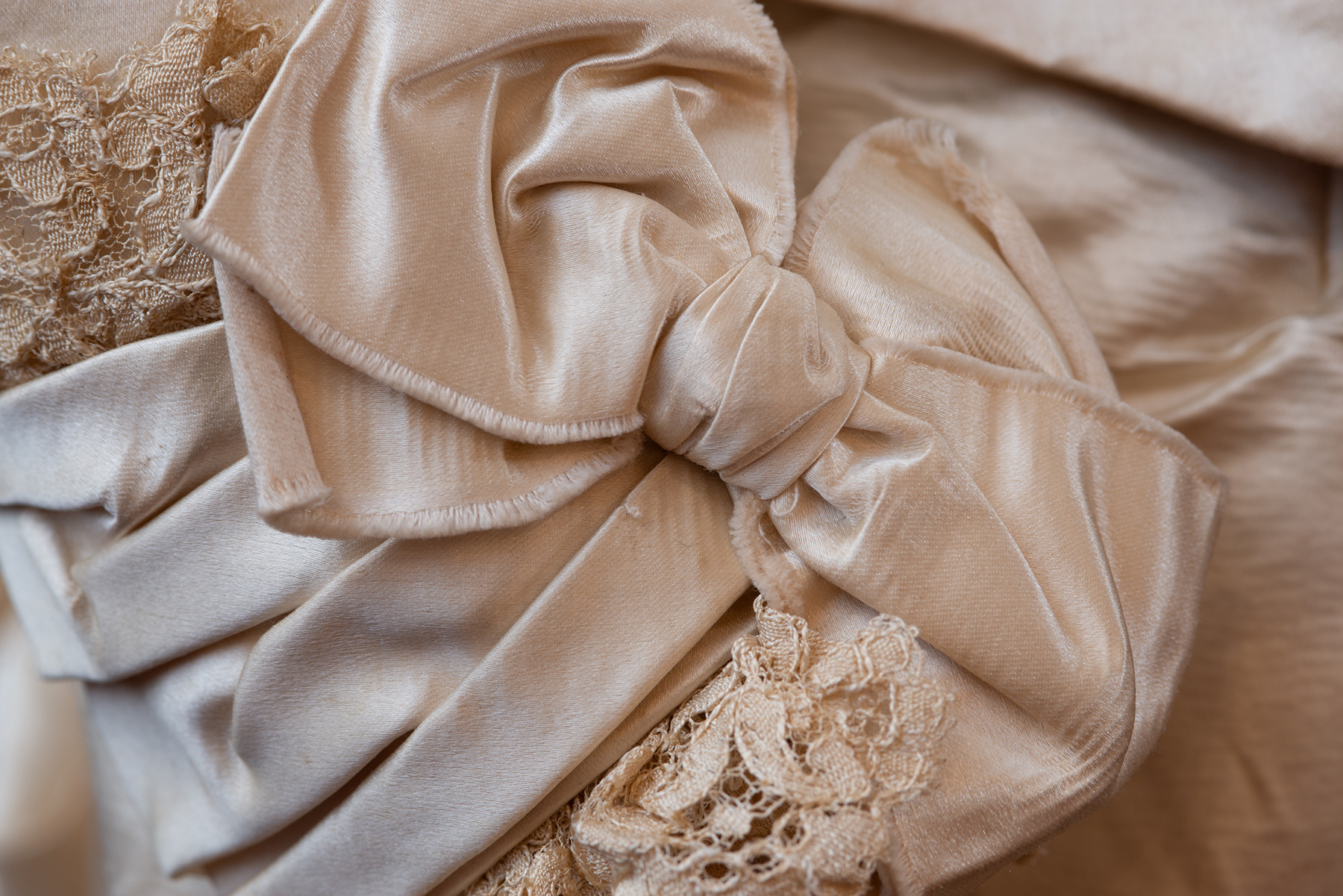 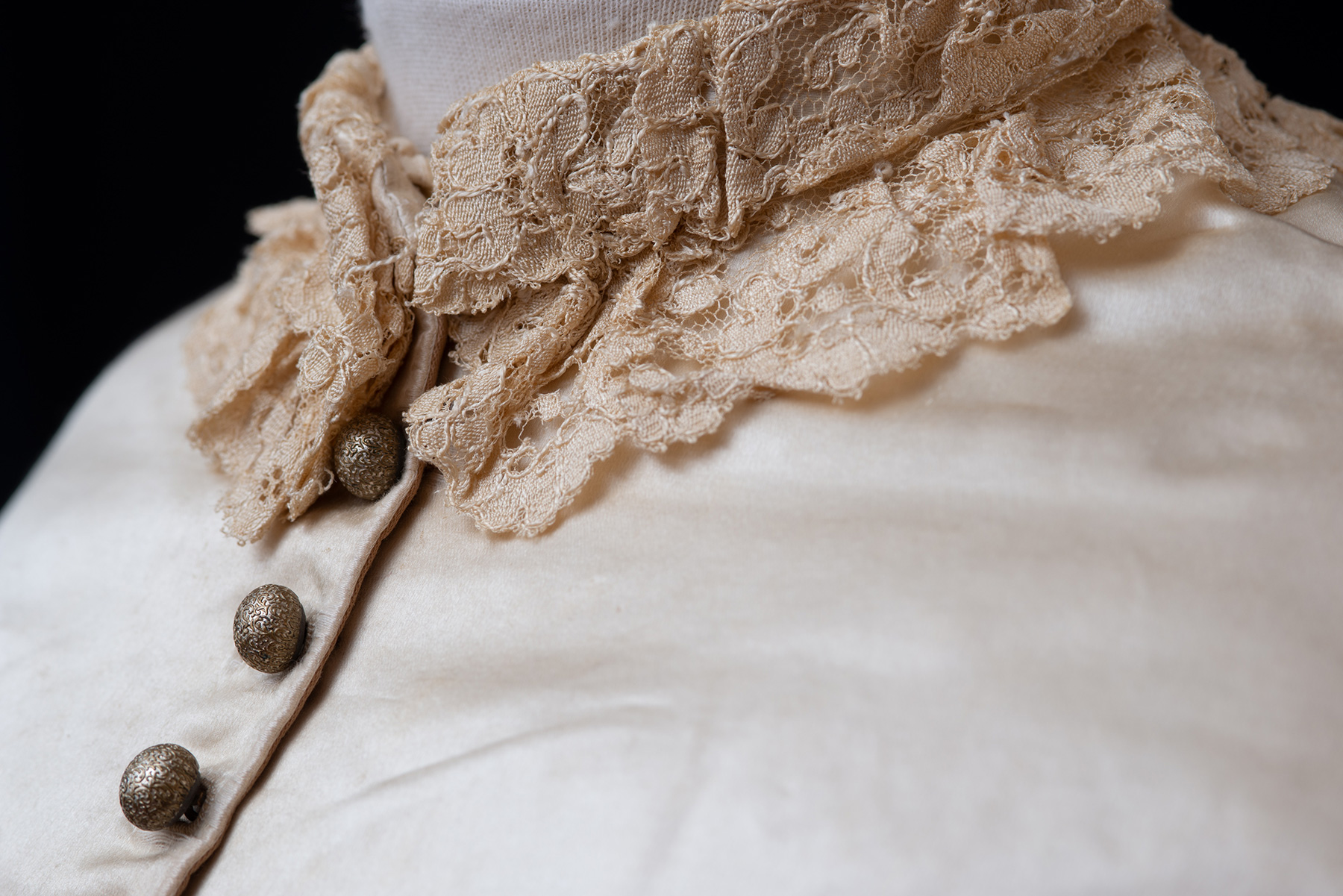 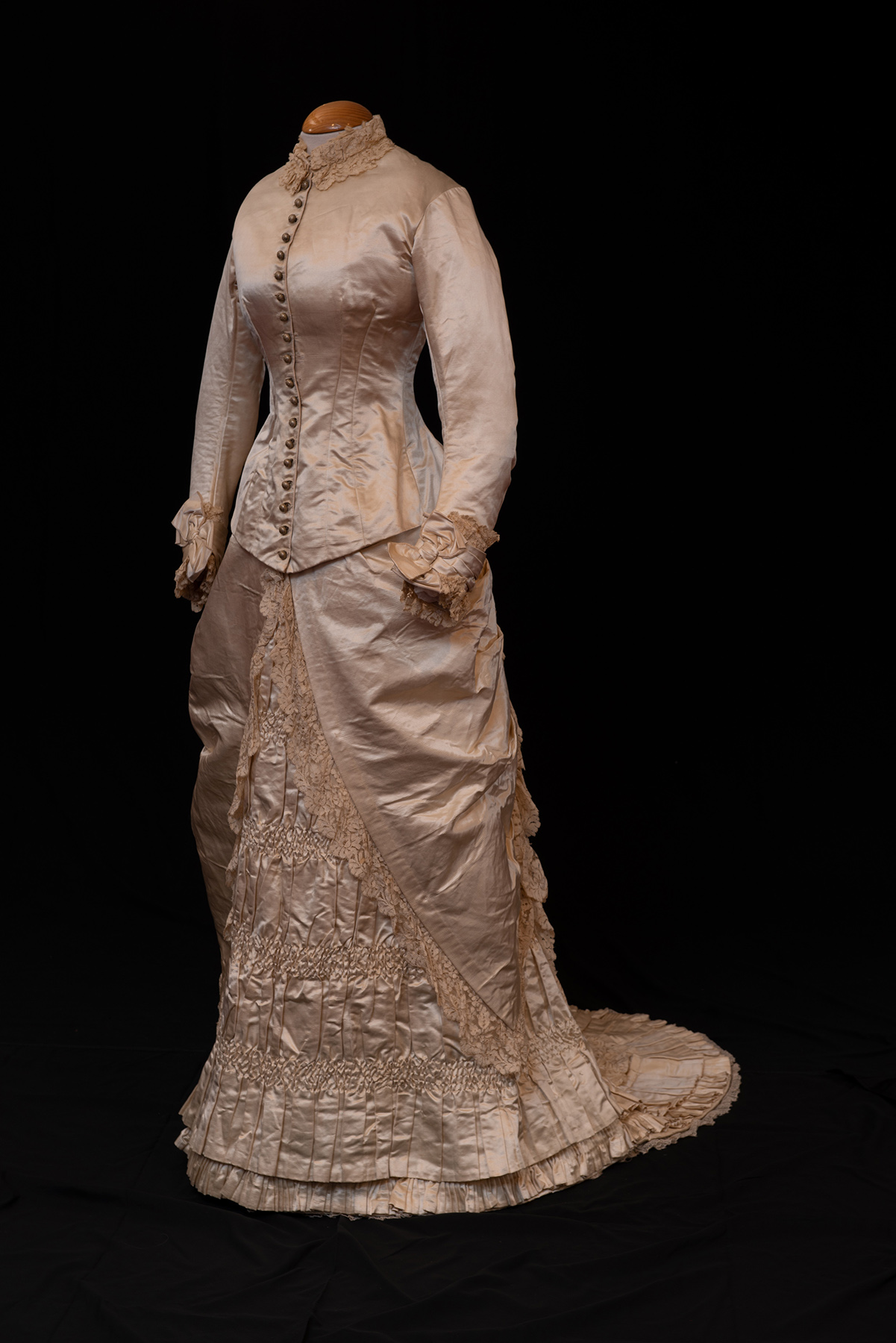 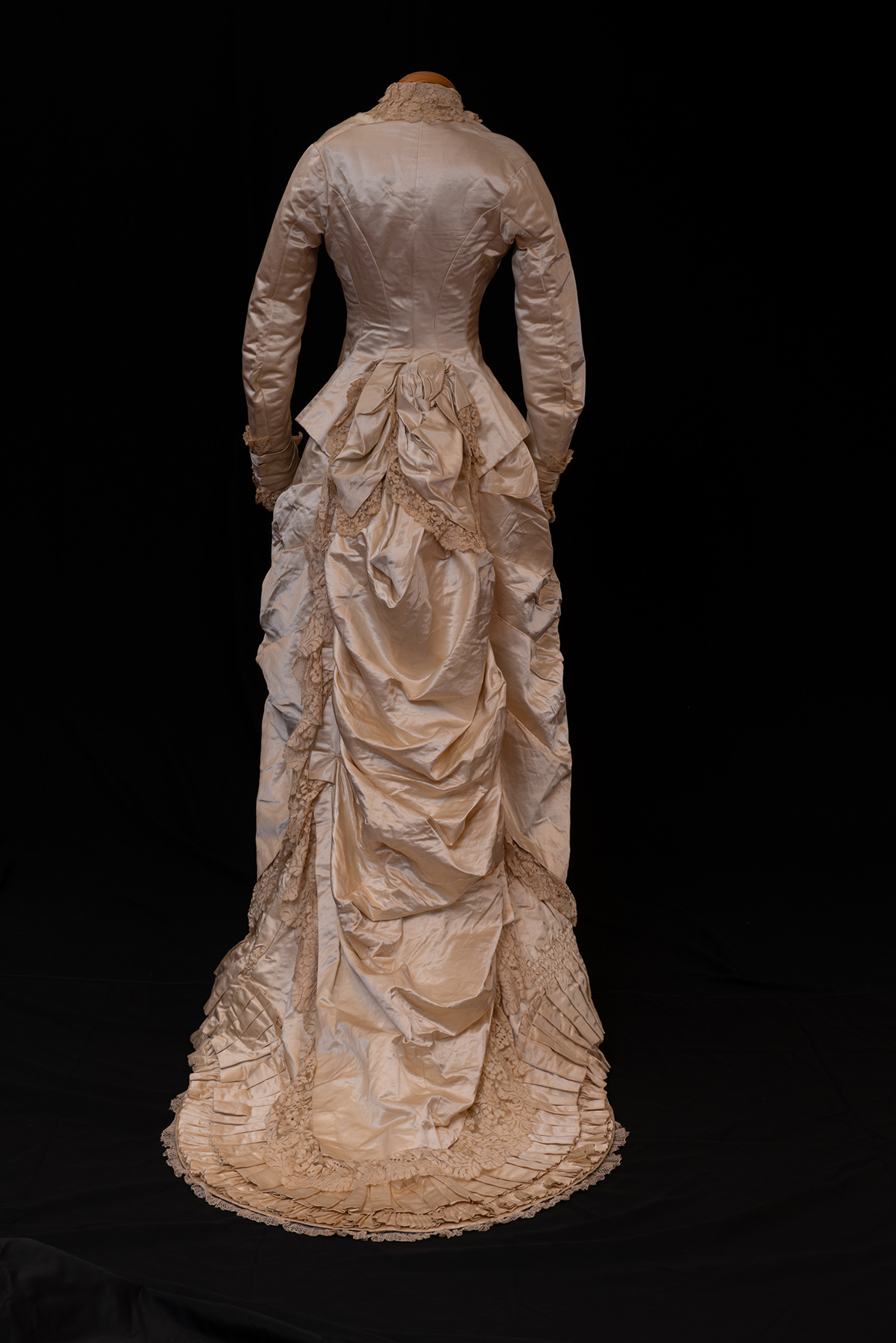 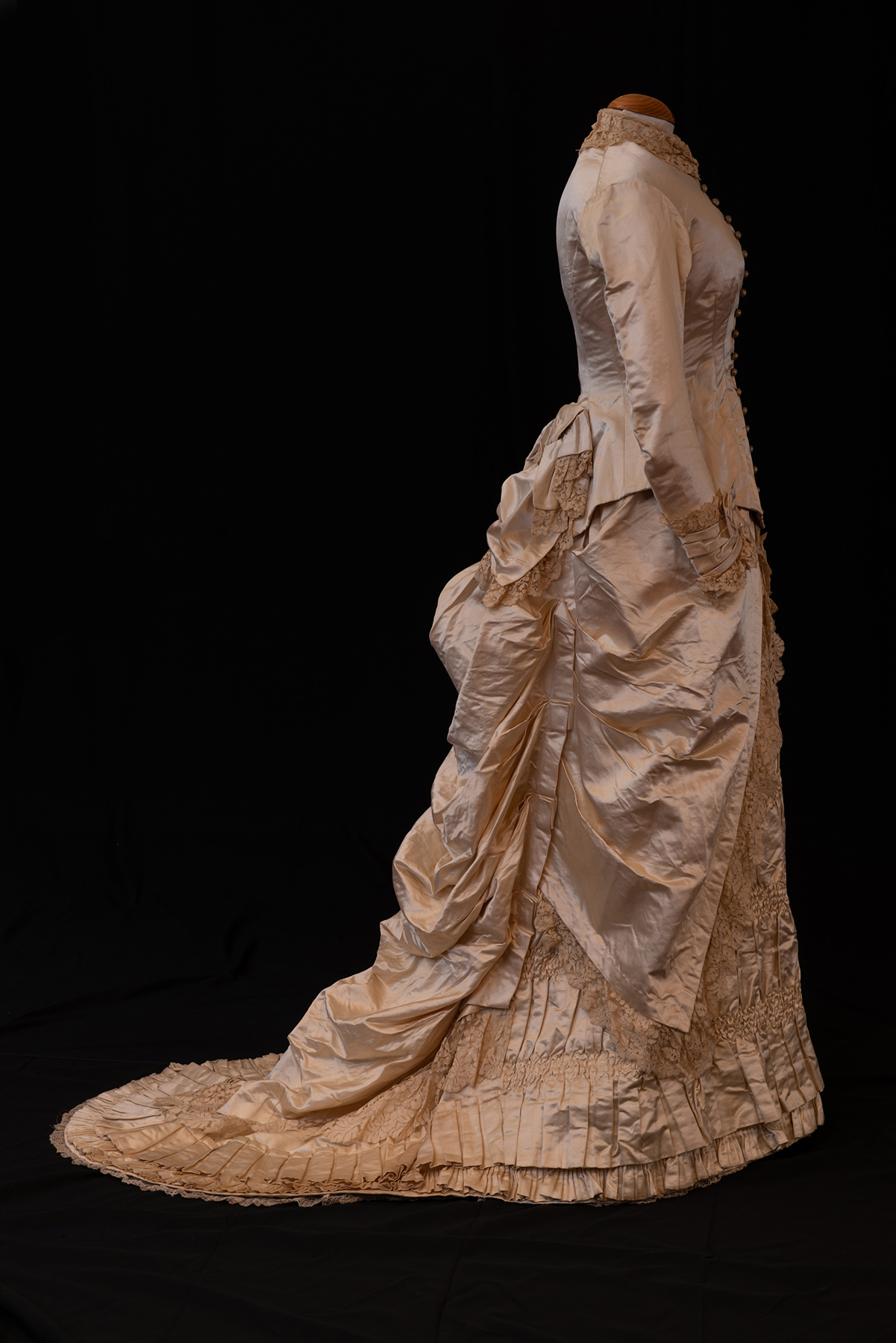 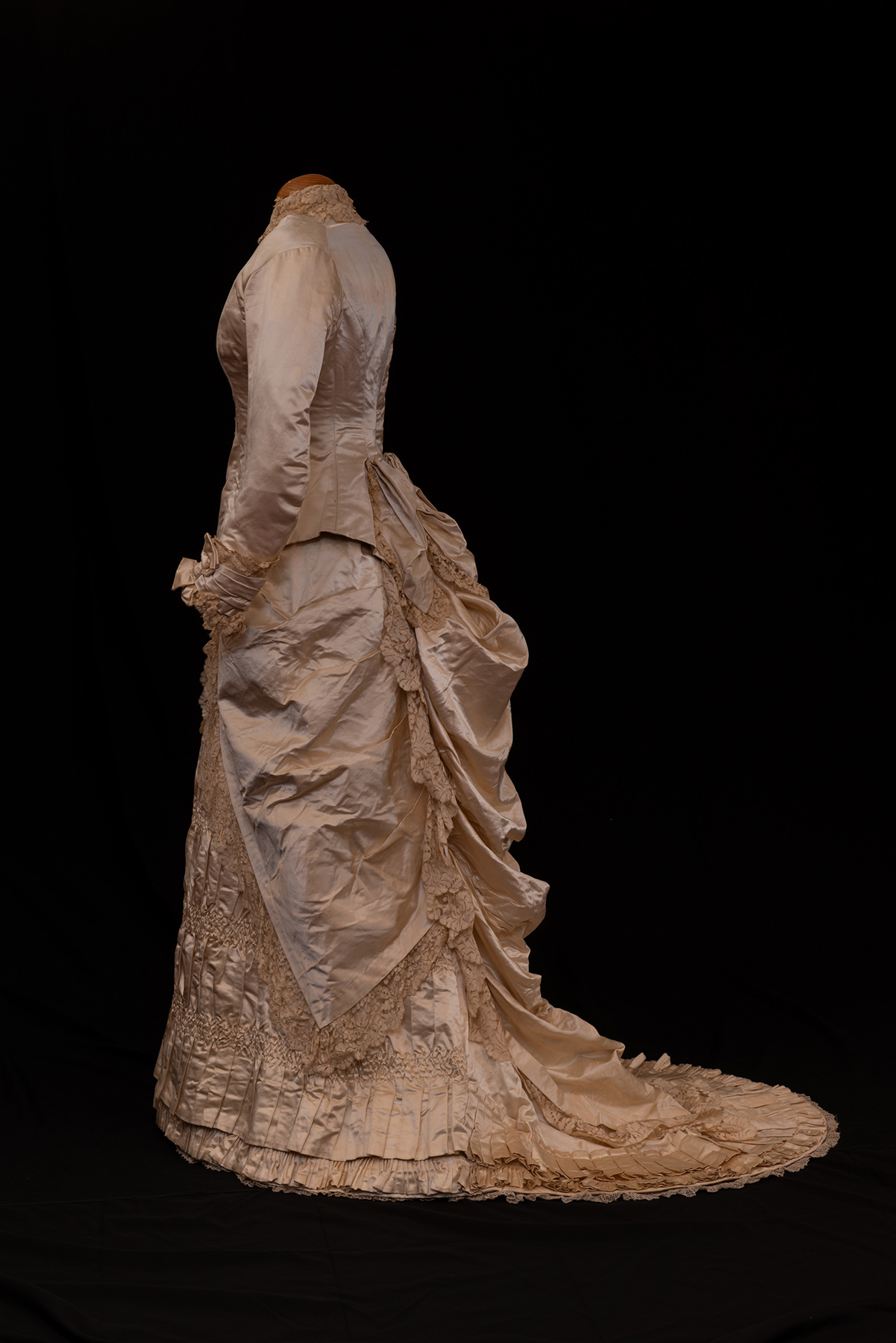 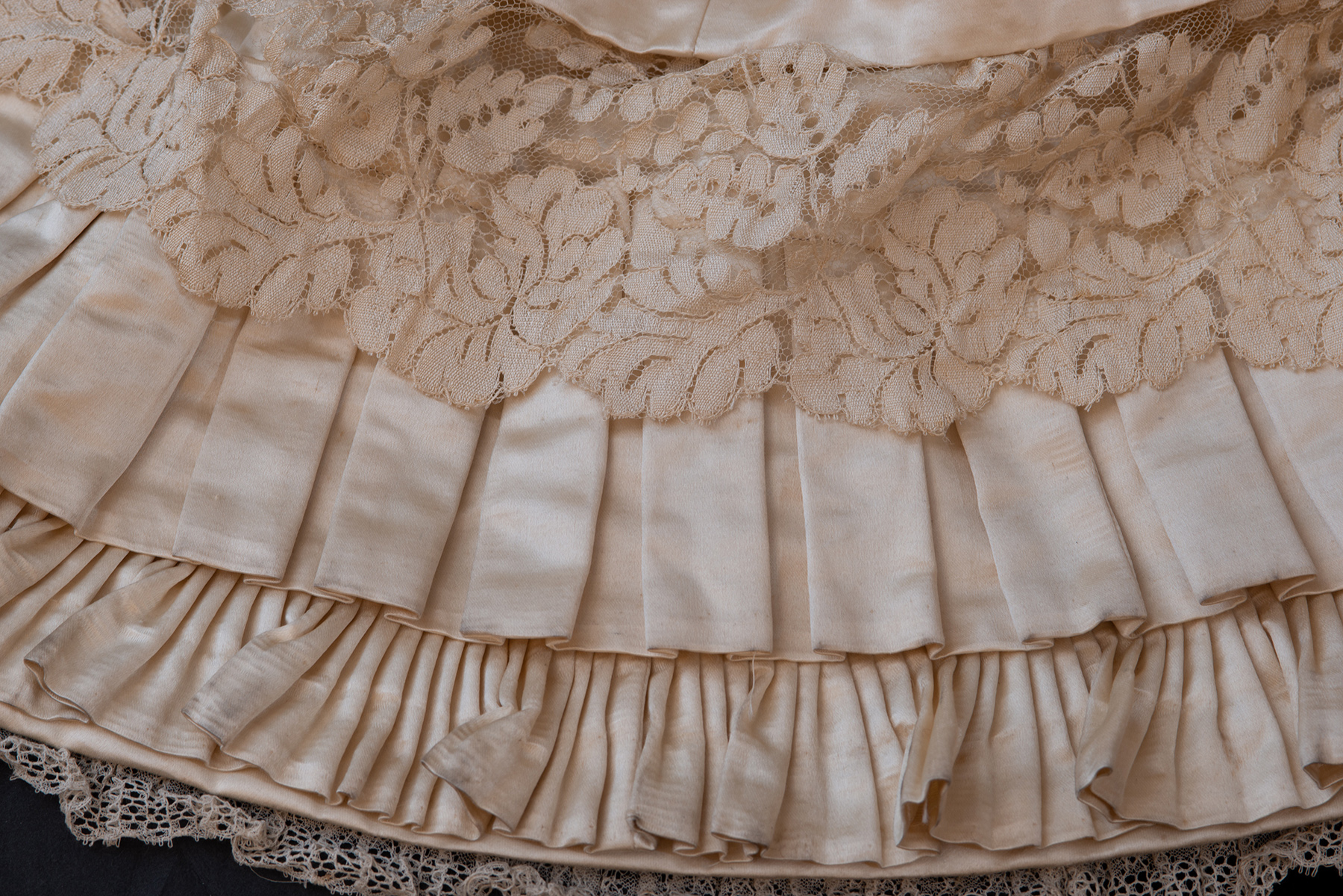 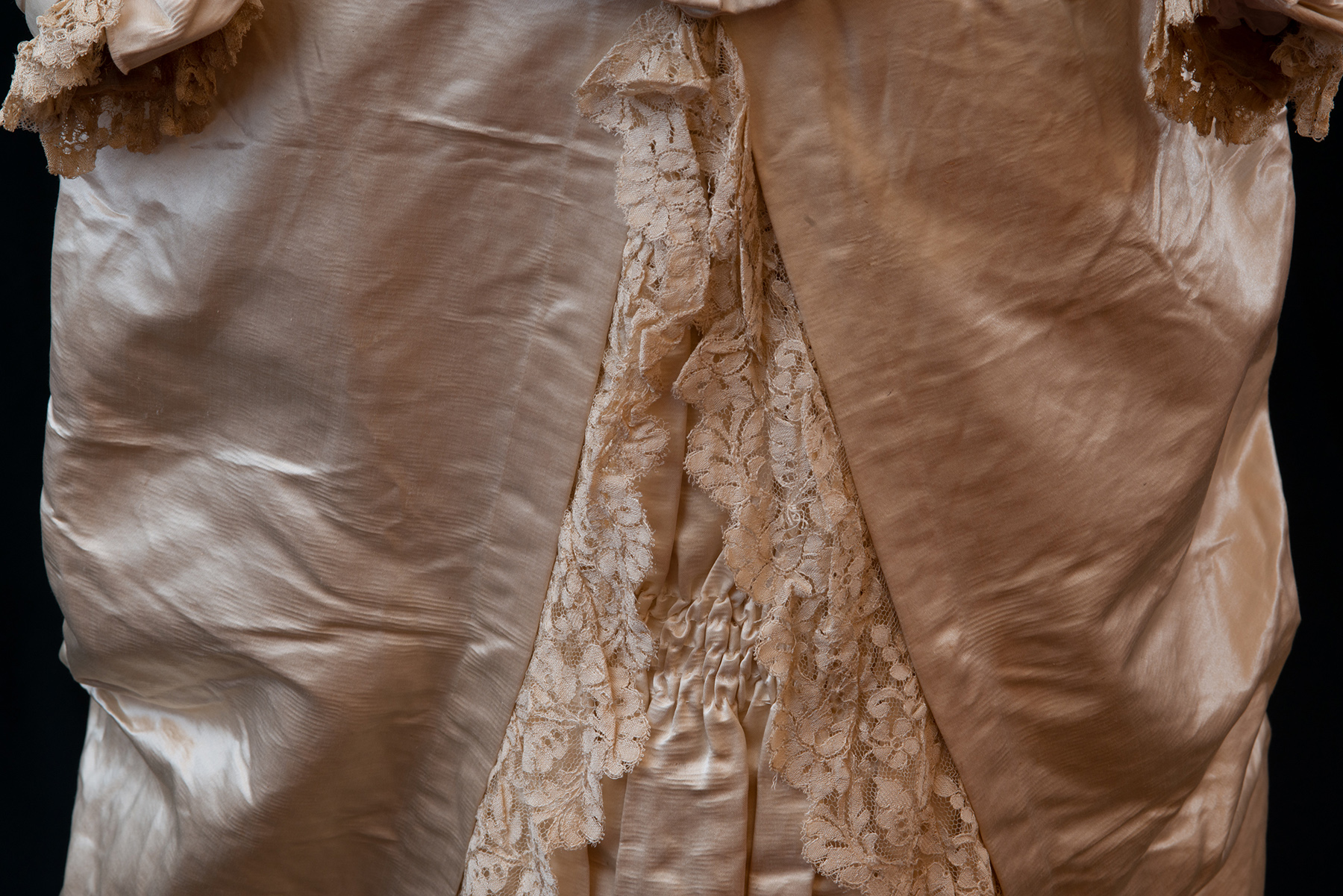 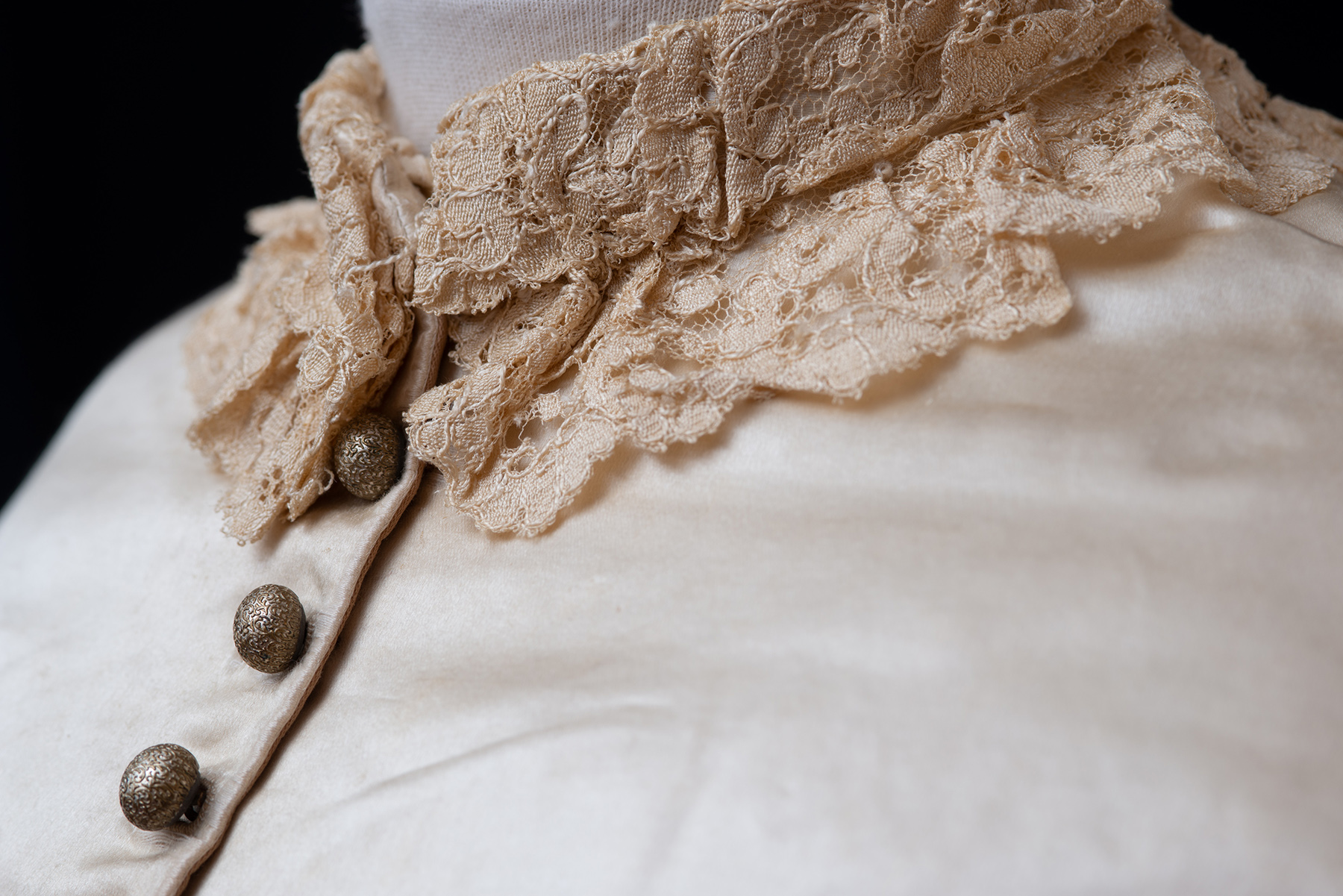 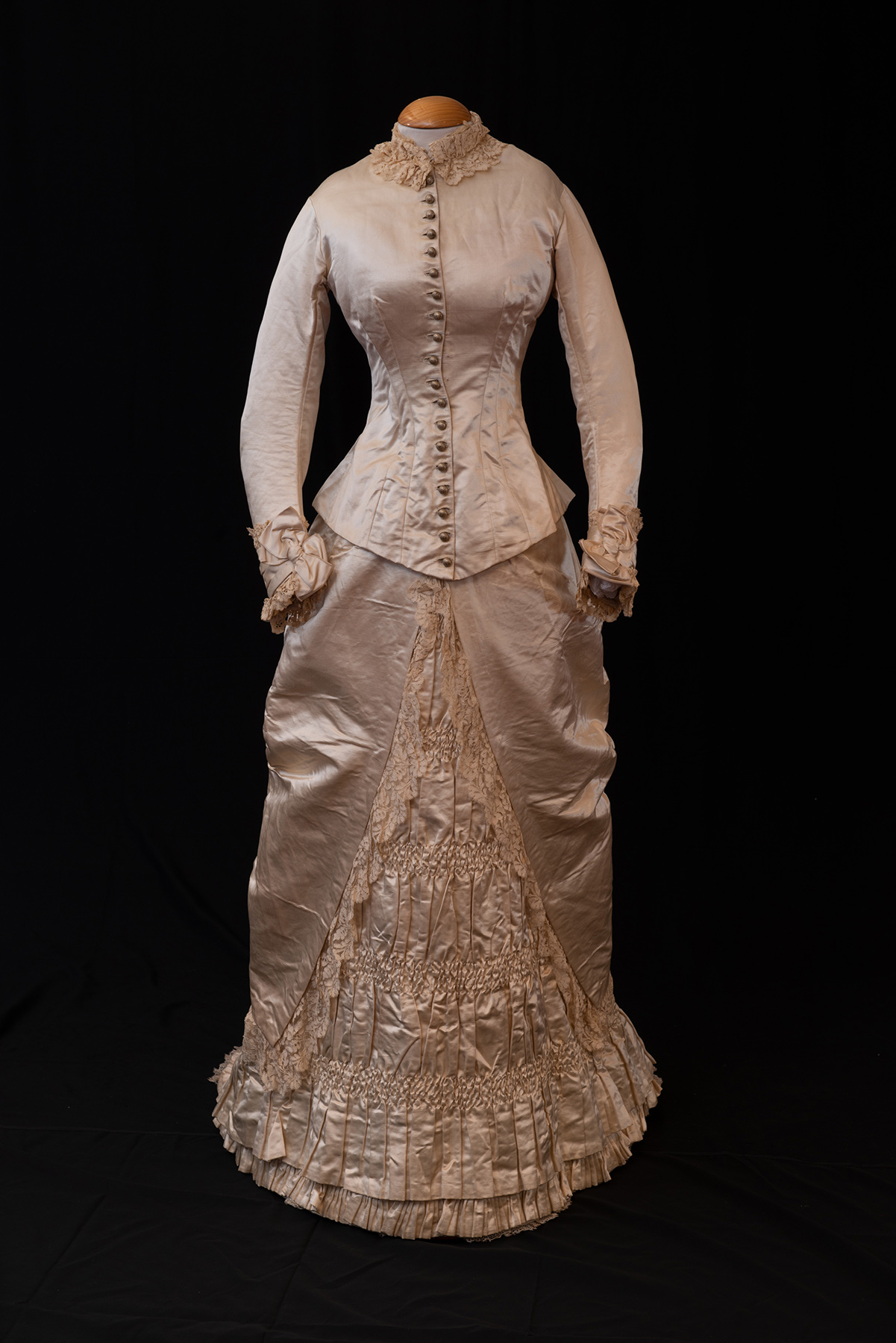 This Victorian ‘bustle’ wedding dress was made for Miss Agnes Helen Gordon on her marriage to Donald MacDougall in 1882. Donald was a farmer at Craggan near Grantown-on-Spey and owned a large general store in the town. Agnes’s story gives us a glimpse into life in a Highland town during the late Victorian period and the turn of the turbulent twentieth century.

Agnes was born in January 1860 at her mother’s family home in Poolewe, in the northwest Highlands. On 6th May 1882, Agnes Helen Gordon married Grantown man, Donald MacDougall. Agnes was aged twenty-two and her husband was fifty-two. Donald owned Macdougall & Co. the largest shop in Grantown-on-Spey, a thriving Victorian market town and the main centre for business in the Central Highlands. The general store was not only a grocers, but a drapers, ironmongers, furniture warehouse and even housed a hairdressing salon.

When Donald died in September 1914, Agnes continued to run the store. She became a shop owner in her own right and held a prominent position in Grantown society. The building was sold on her death in 1941 and is now the Co-op, the main supermarket in Grantown-on-Spey. Agnes and Donald had eight children, five sons and three daughters. Their eldest seven were born between 1883 and 1894 with baby Agnes arriving in 1901. All five sons served in World War One and remarkably, all survived. Three of the boys enlisted from overseas which suggests that they had already emigrated. James enlisted in Australia, Alexander in Malaya and Joseph in Canada. Agnes and Donald’s eldest daughter Helen was widowed in 1918 when her husband was killed fighting on the frontline in France.

Agnes’s wedding dress is beautifully made, perfectly fitted and the height of fashion for the period. The fitted bodice with a high neckline sits over an elaborate overskirt draped on a bustle with train of cascading ruffles. The Bustle was making a comeback in the 1880s after the large crinoline skirt had replaced the fashion of the early Victorian era. It was made by gathering the skirt fabric into a ‘bustle’ held over a pad or frame. This allowed the fabric to flow into a train that trailed behind the wearer and created a smooth slender silhouette. The favoured style of an exceedingly small waist and hourglass silhouette required a corset stiffened with bones or wire. Agnes’s dress has an incredibly tiny 23 inch waist!


The modern tradition of the white wedding dress began when Queen Victoria married Prince Albert in 1840. She wanted to make her vows as Albert’s future wife rather than in her role as the monarch. Victoria wore a cream coloured Spitalfields silk wedding gown instead of traditional red ermine robes. This romantic gesture captured public attention. Fashion plates, adverts, valentine cards and sheet music sold the image of the white dress and lace veil as a model of romance and purity. Victorian weddings were traditionally more than just ceremonies to mark the start of a formal relationship. They were important occasions for families to display their status and respectability.

Want to find out more, visit
the Grantown Museum Shop

Help GRANTOWN MUSEUM work through the pandemic closures by paying for your future visit now.