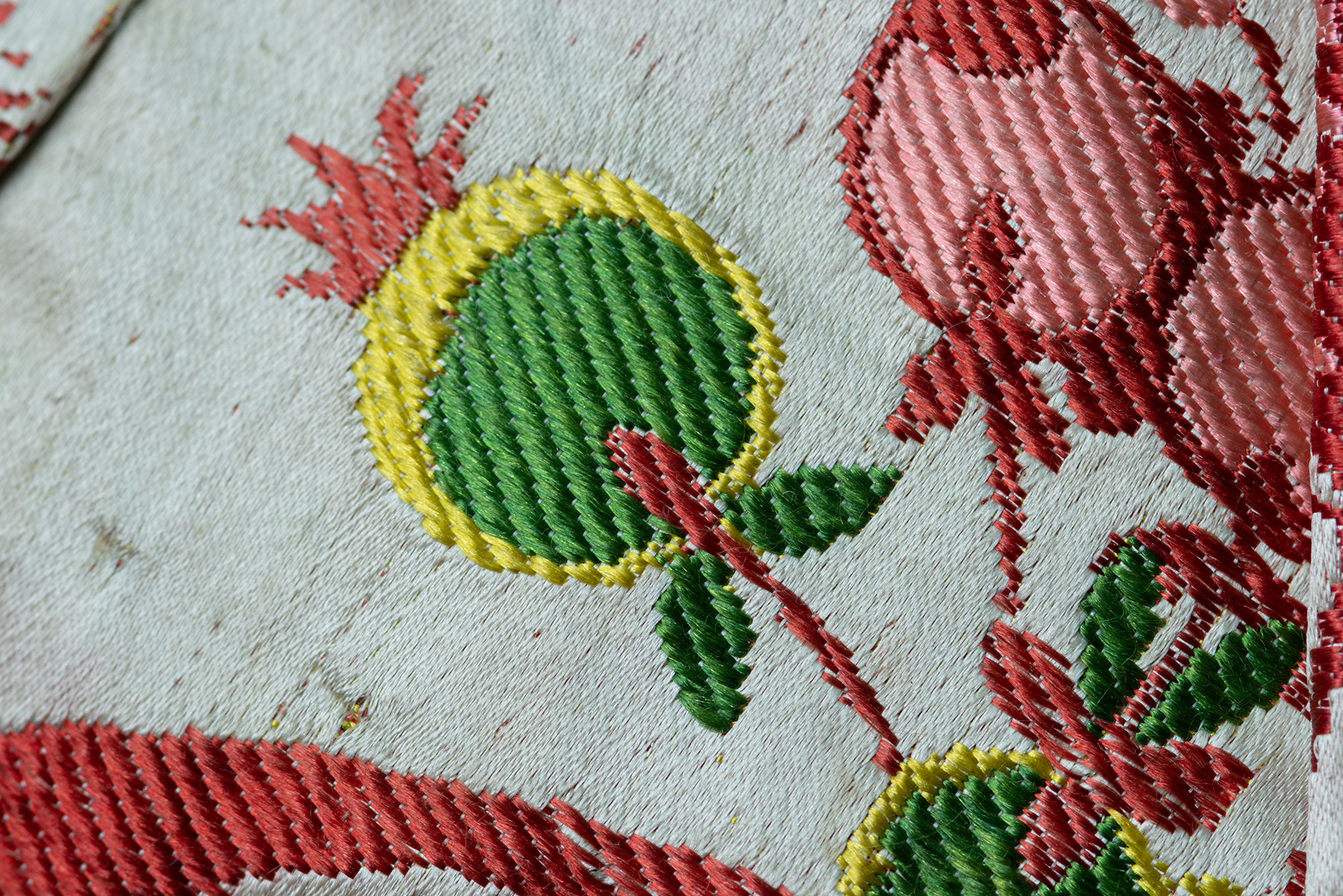 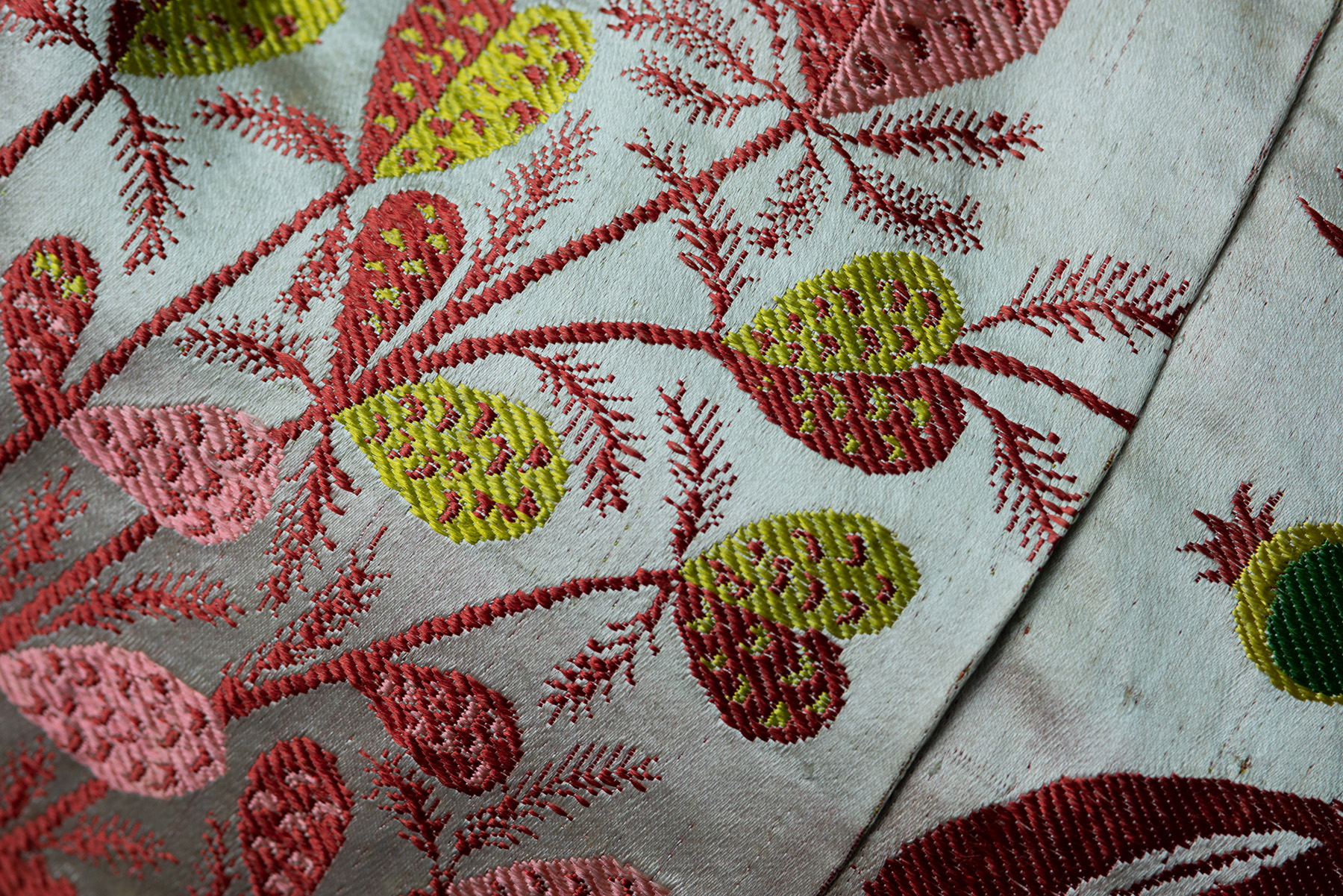 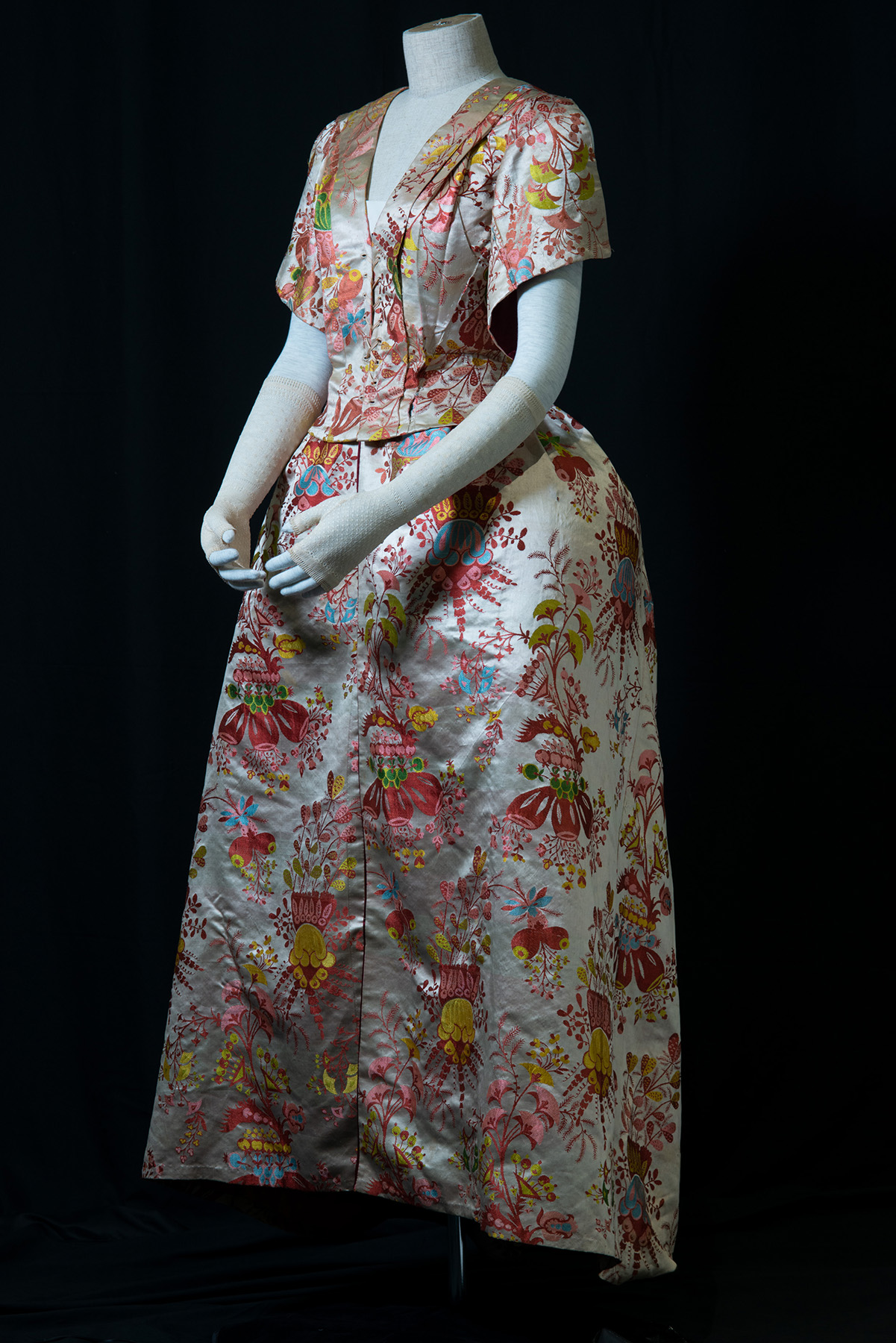 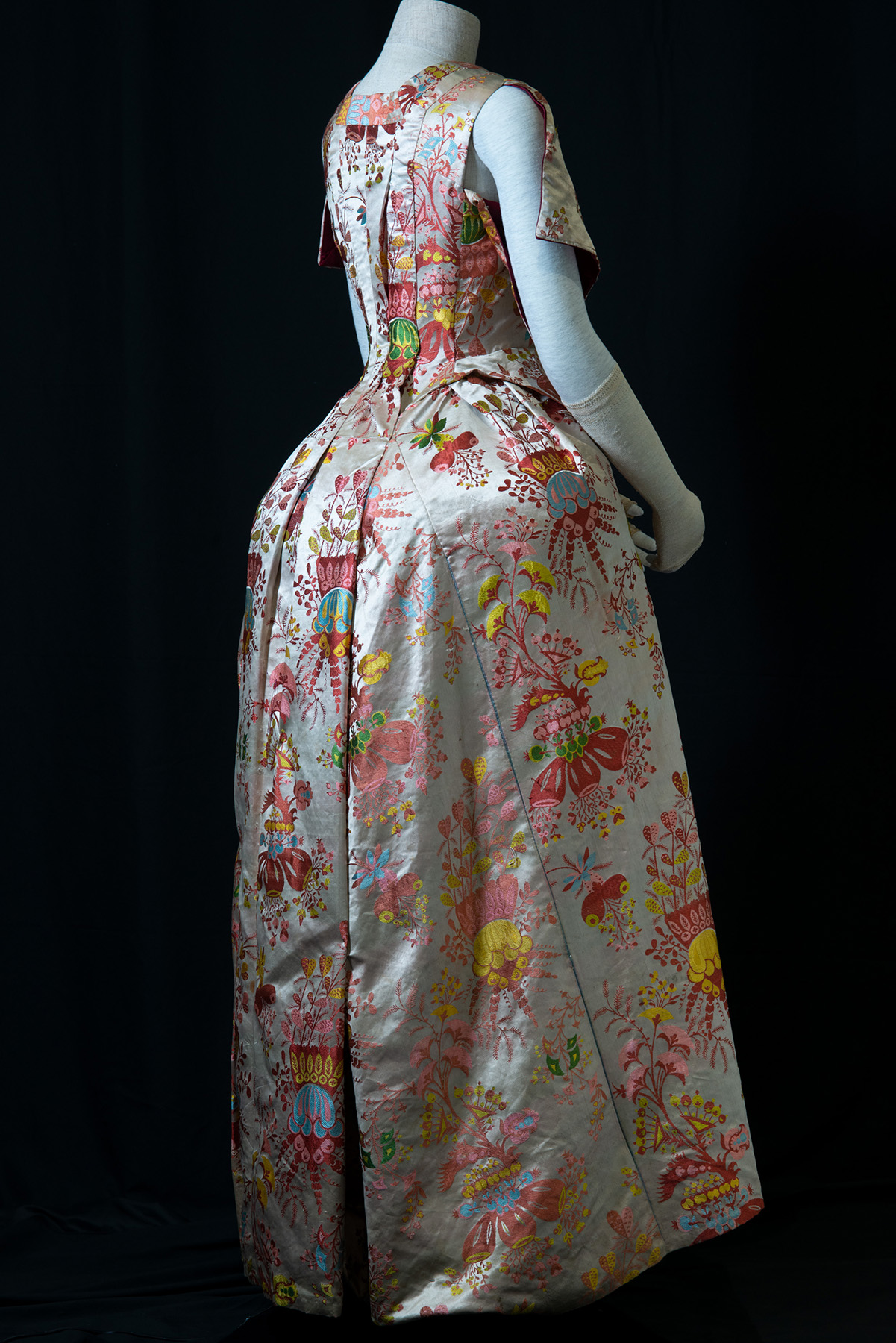 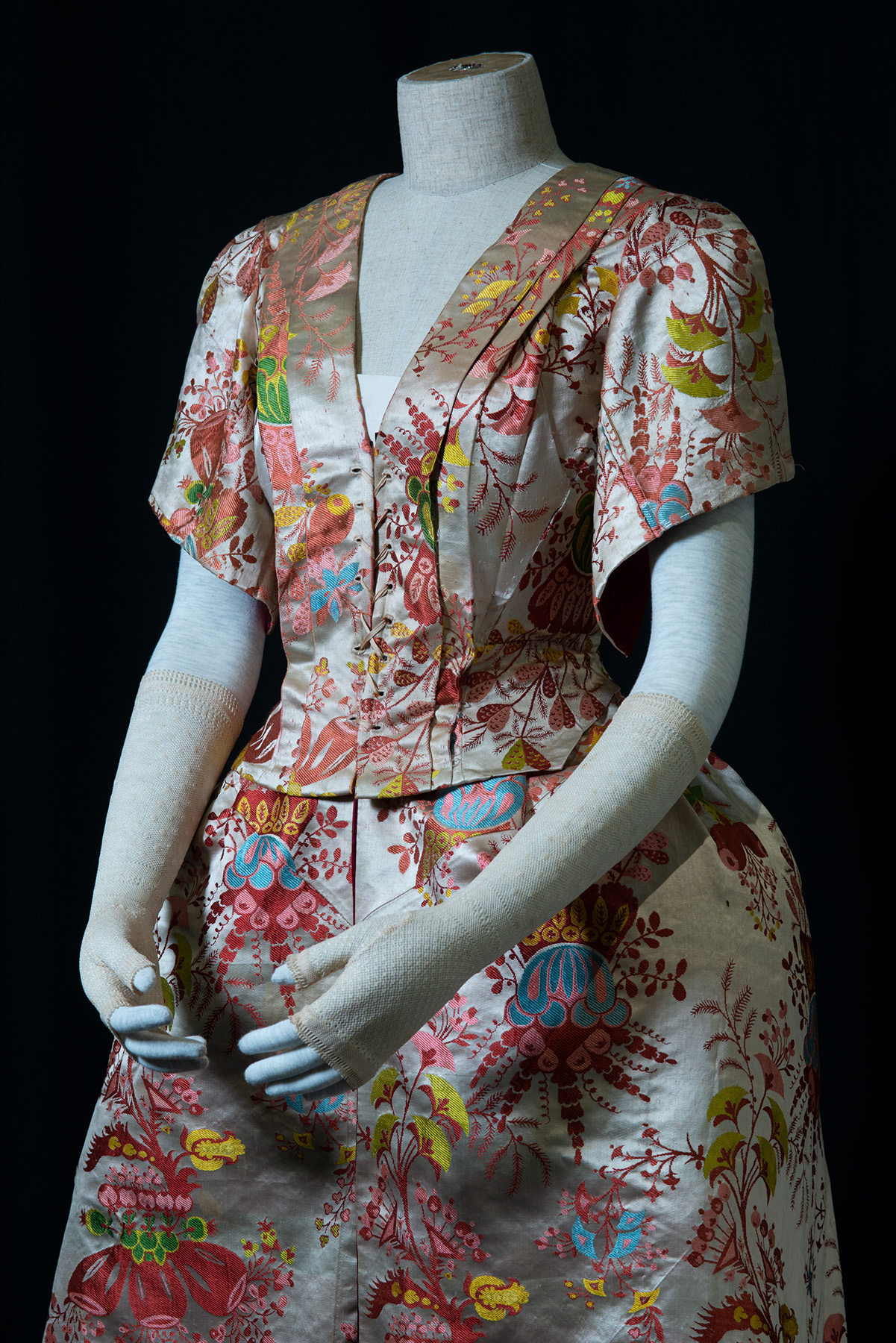 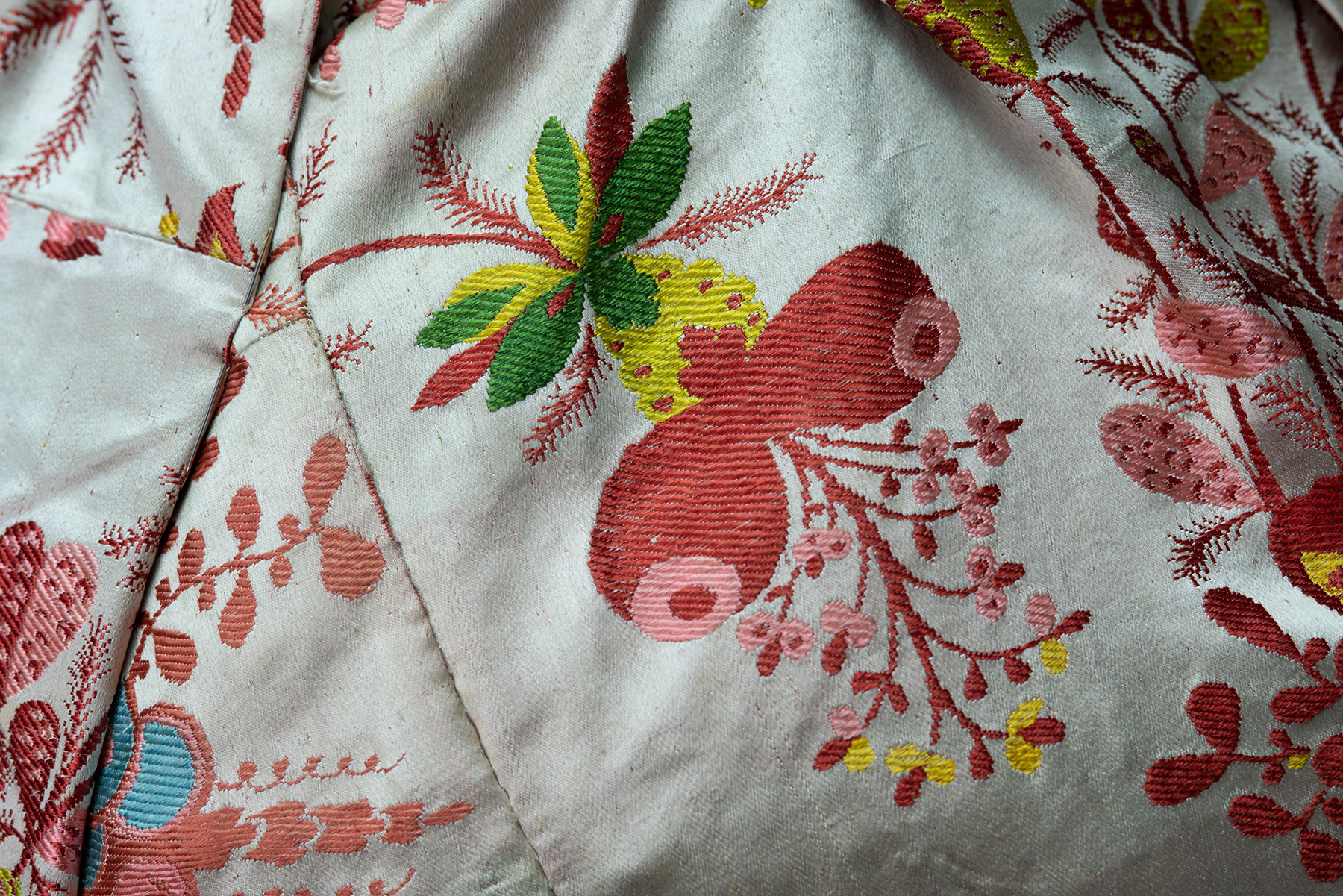 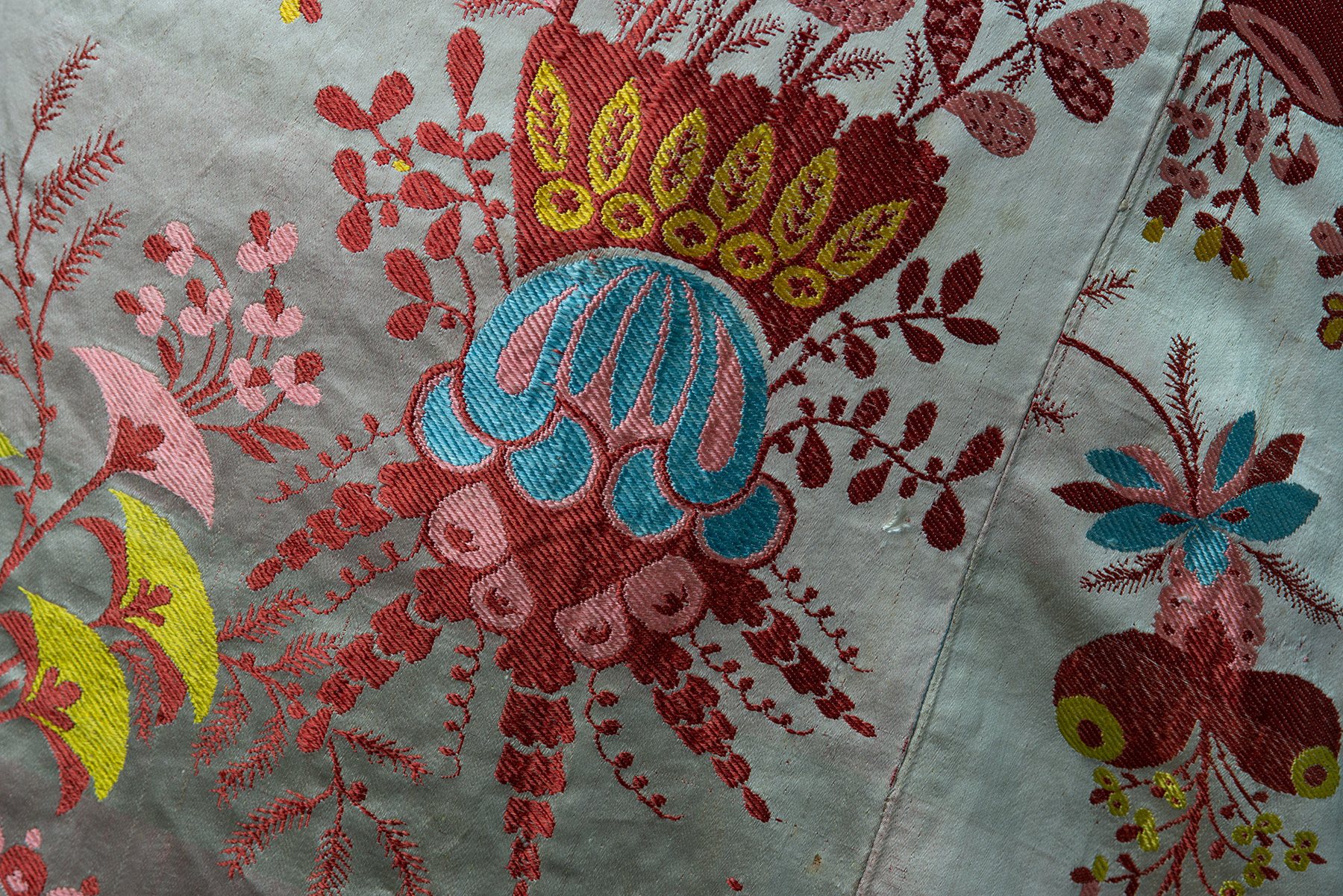 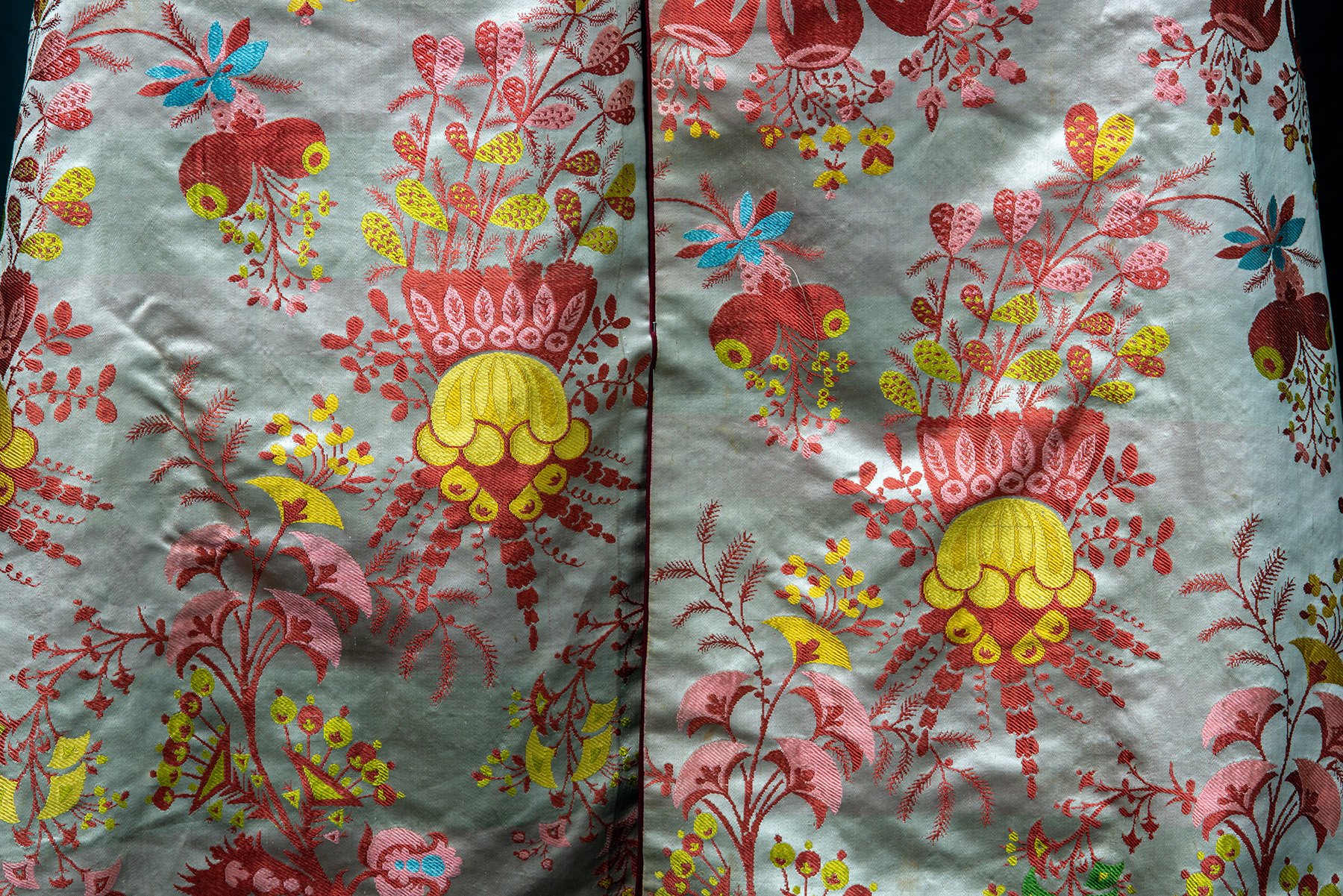 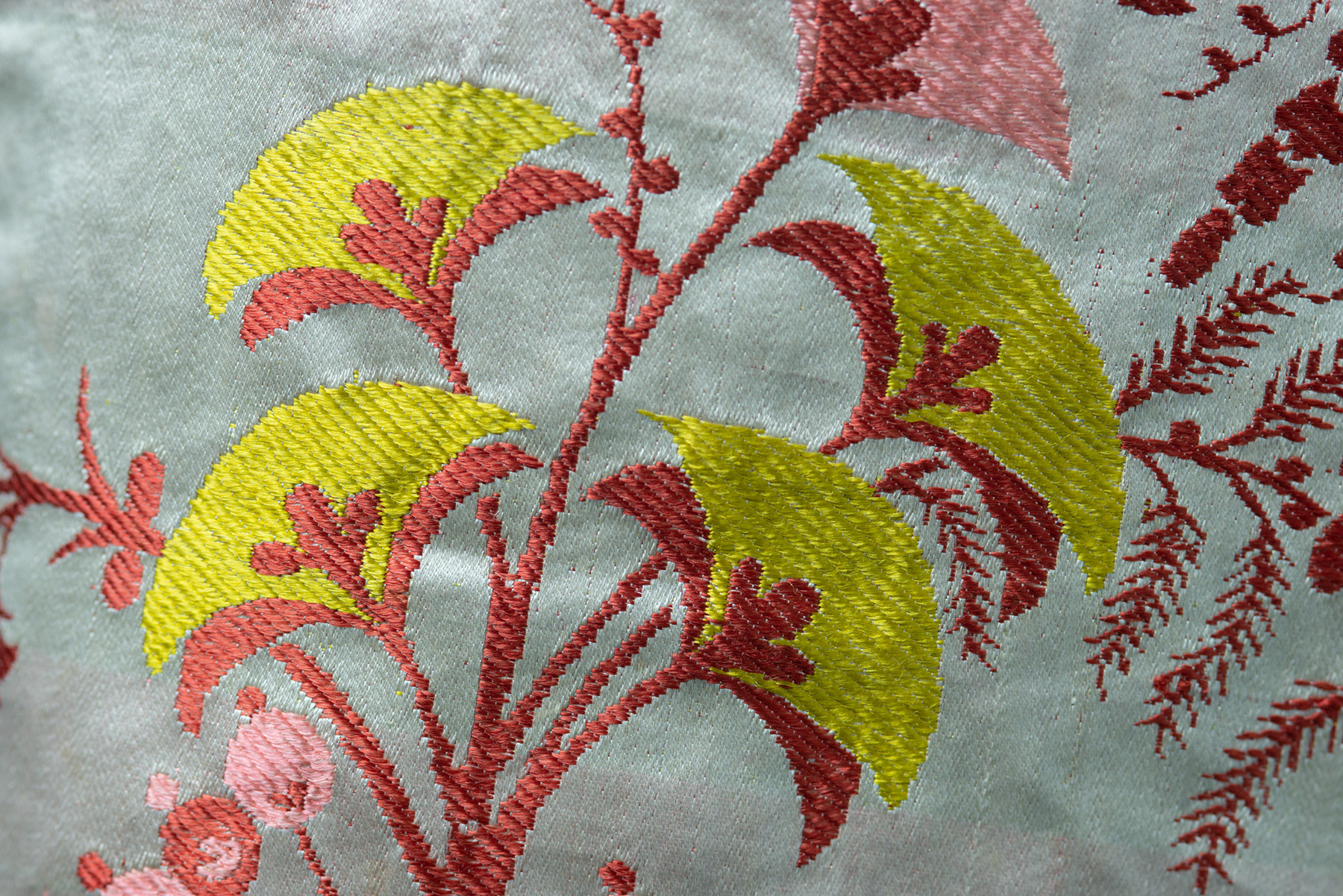 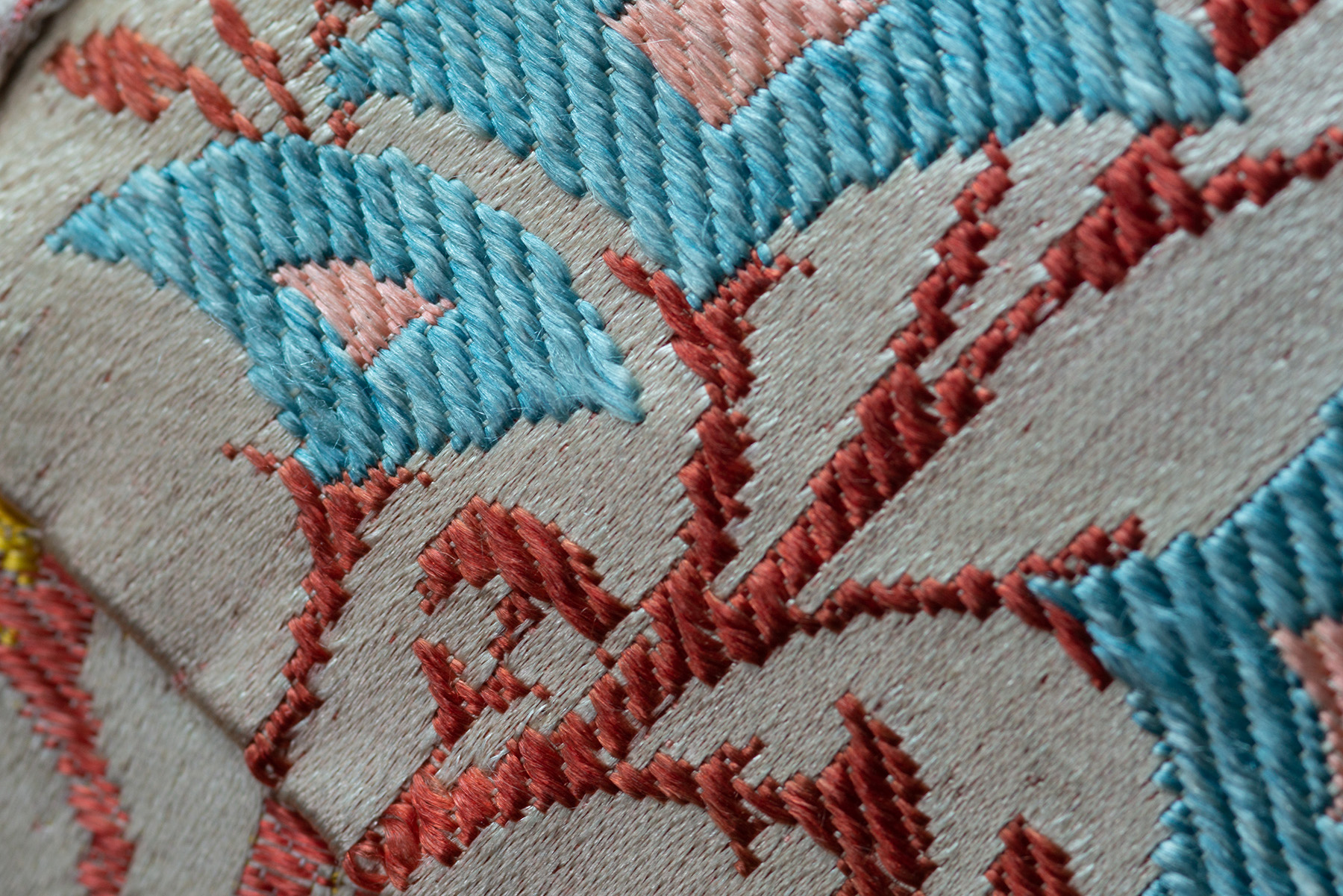 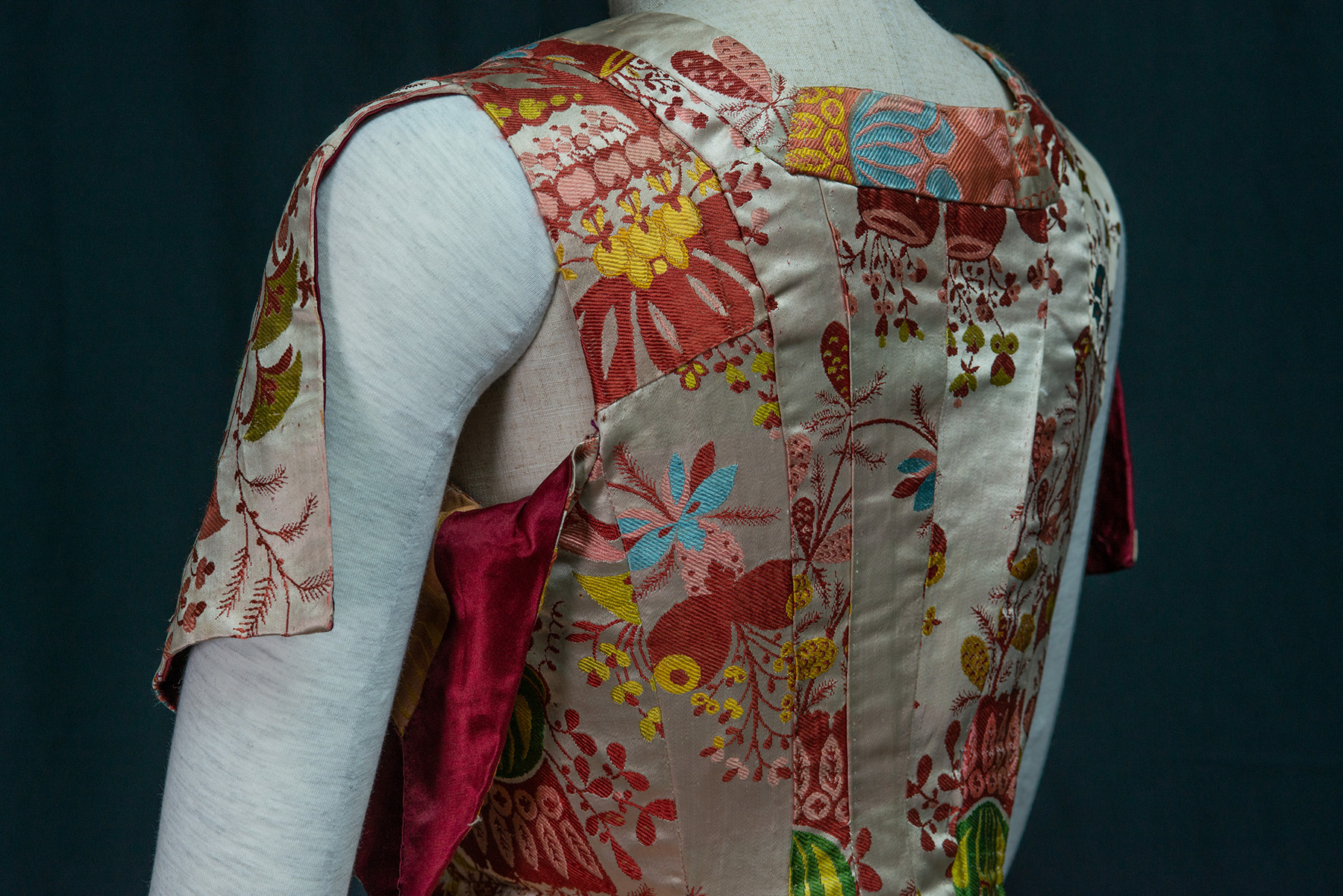 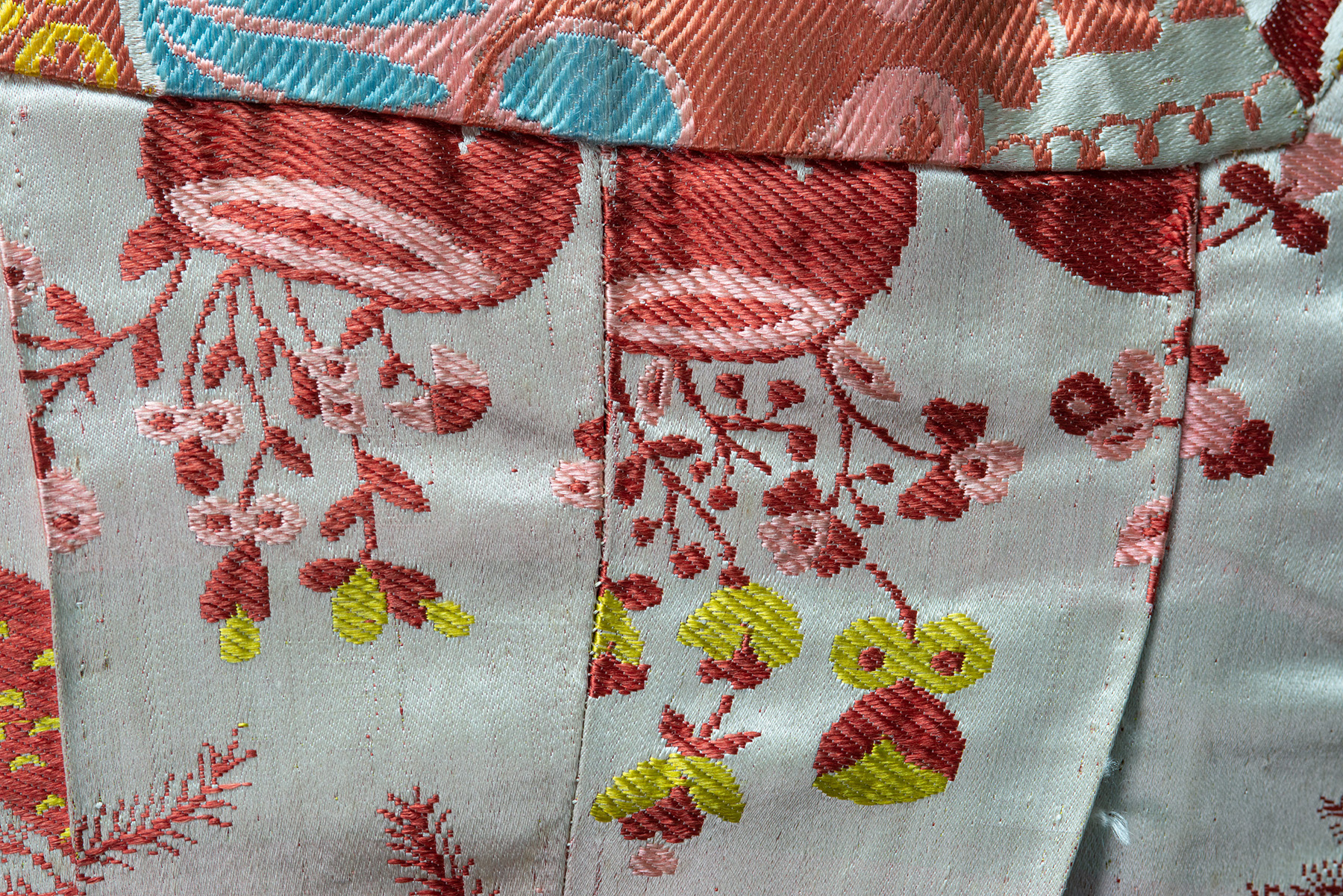 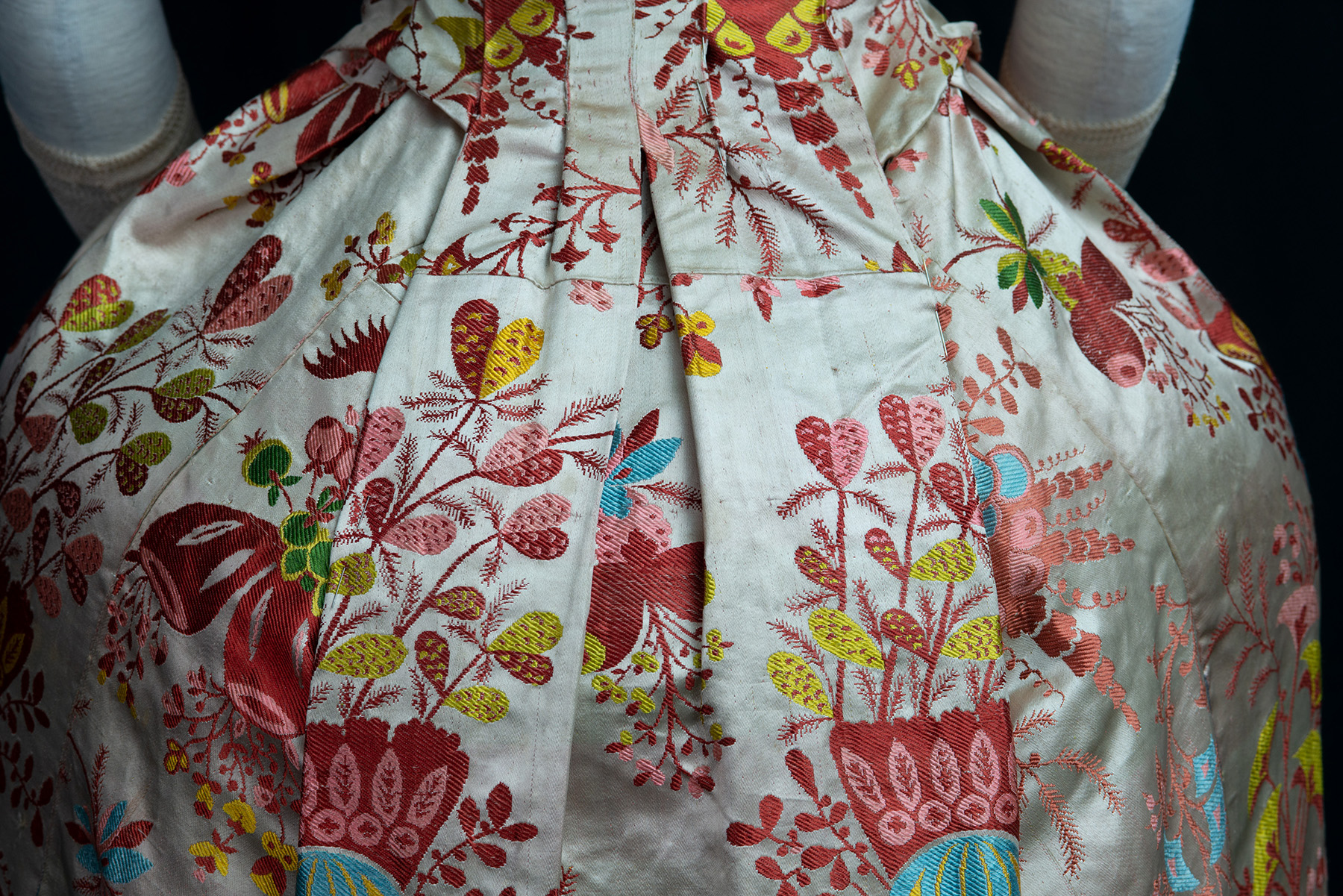 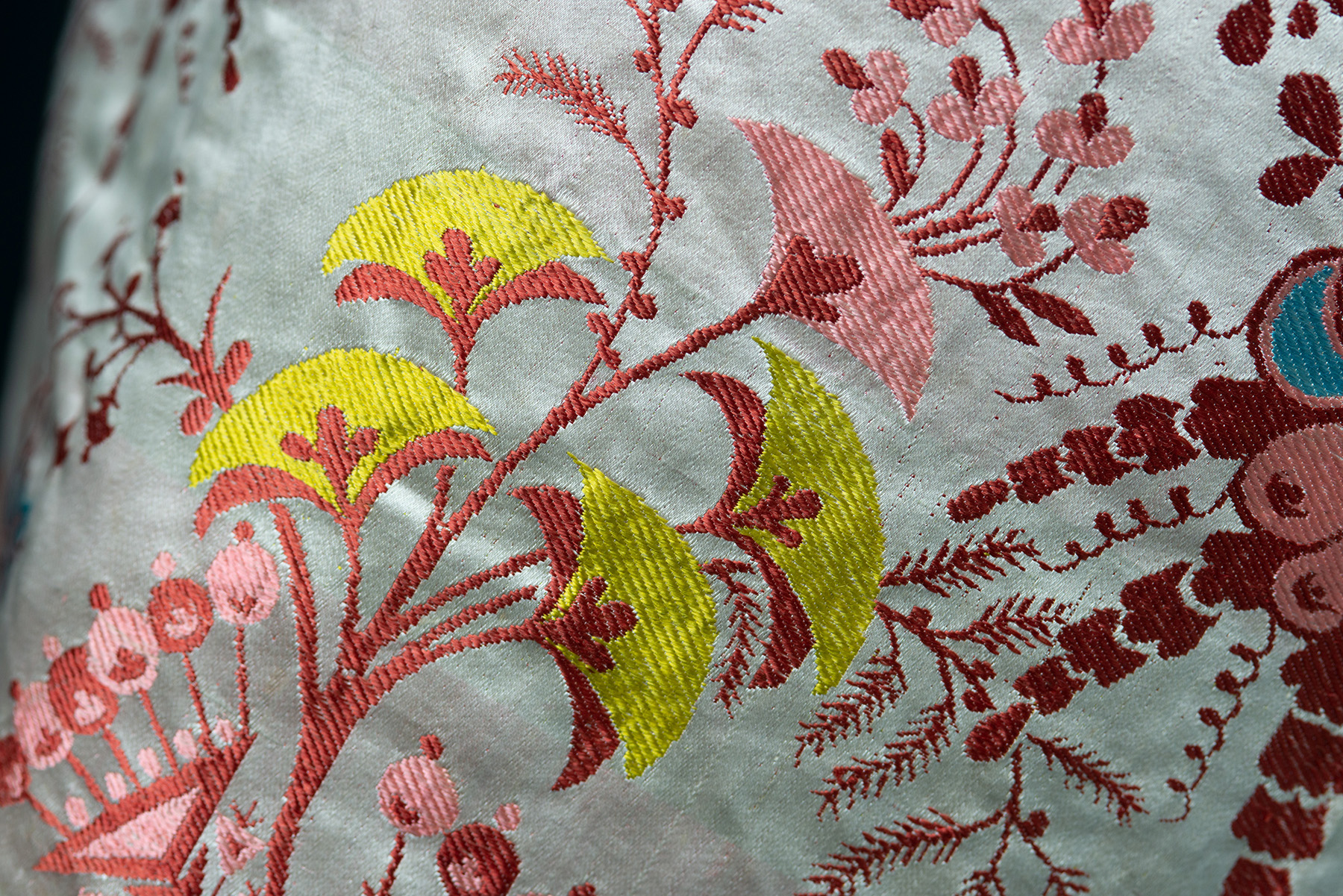 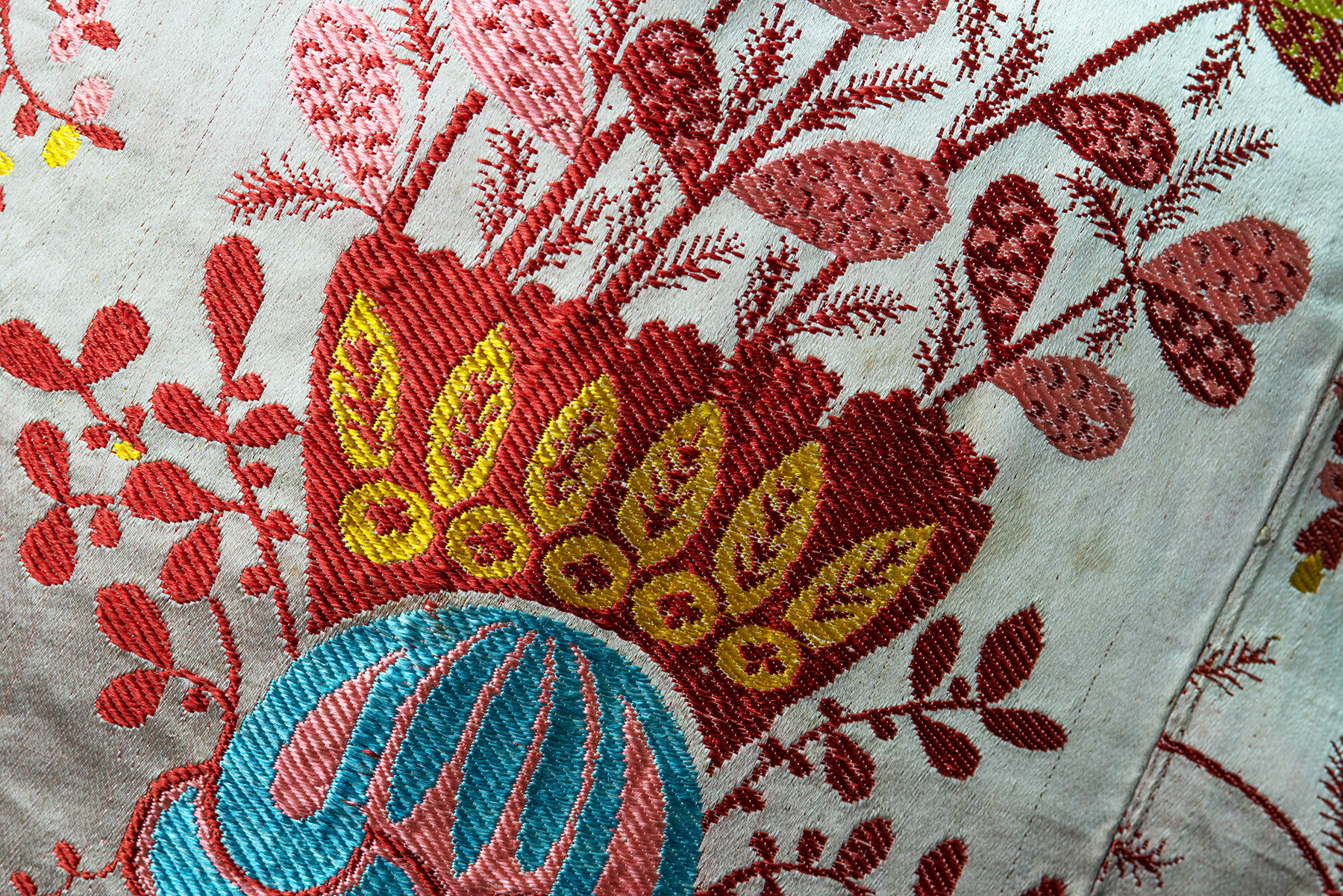 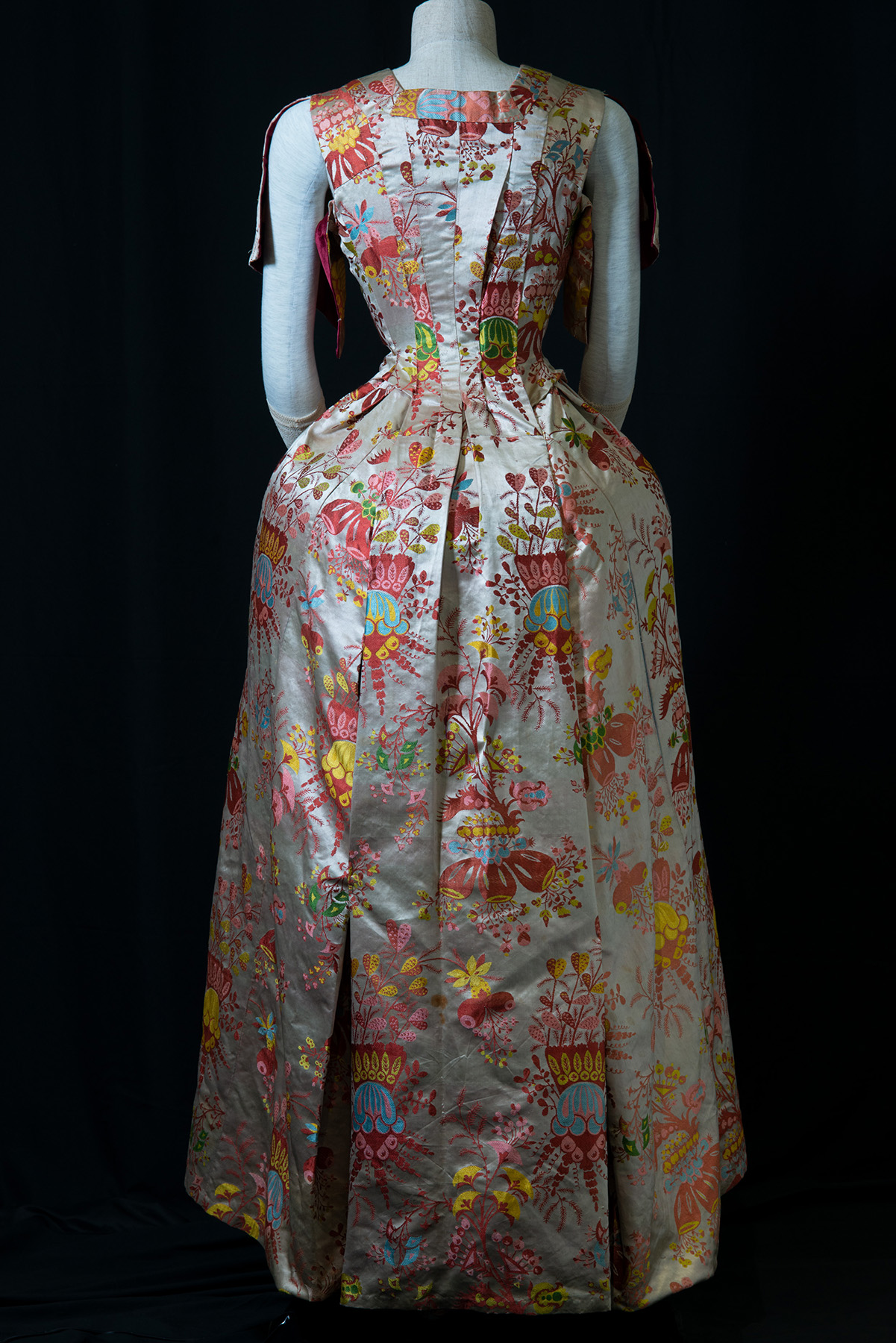 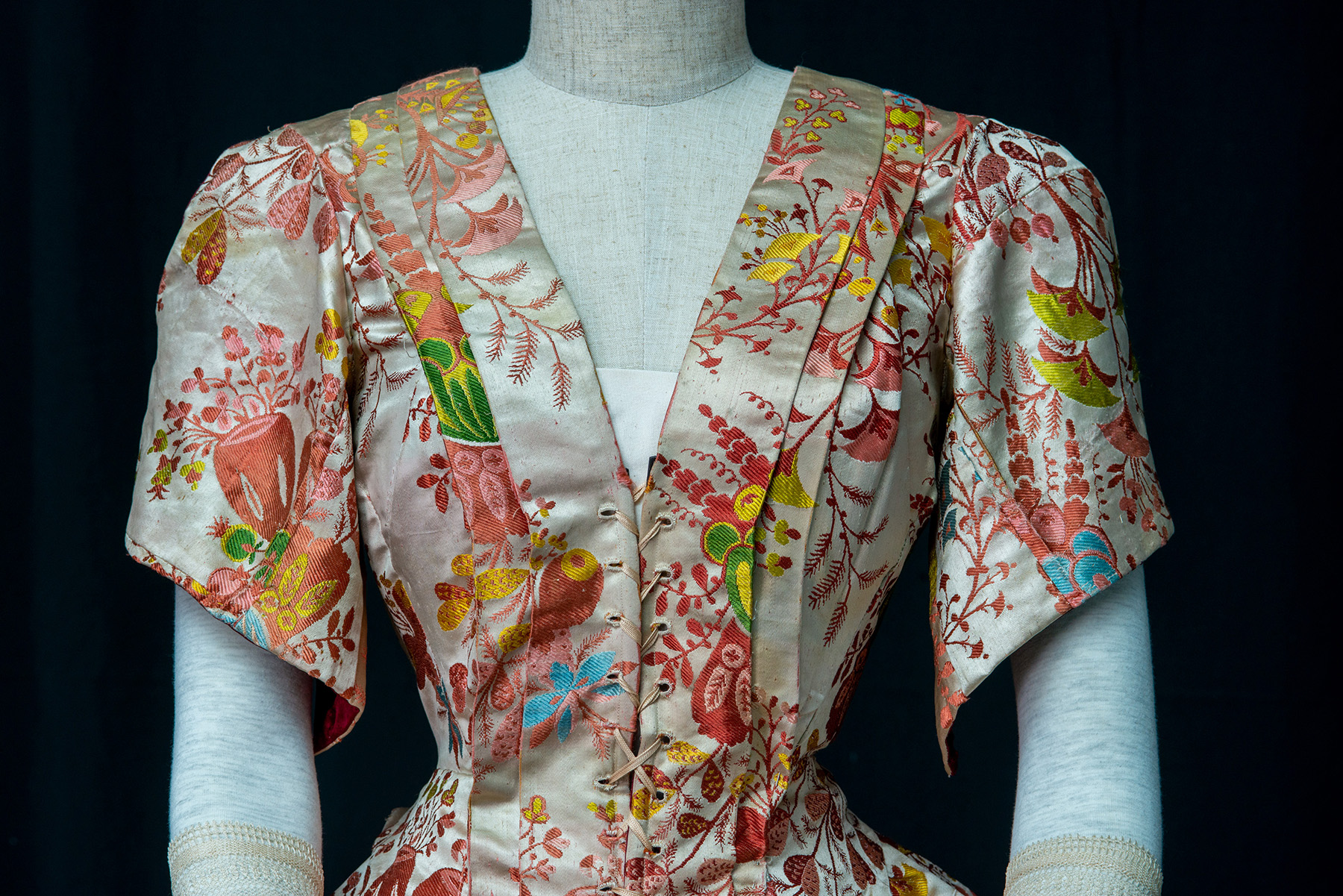 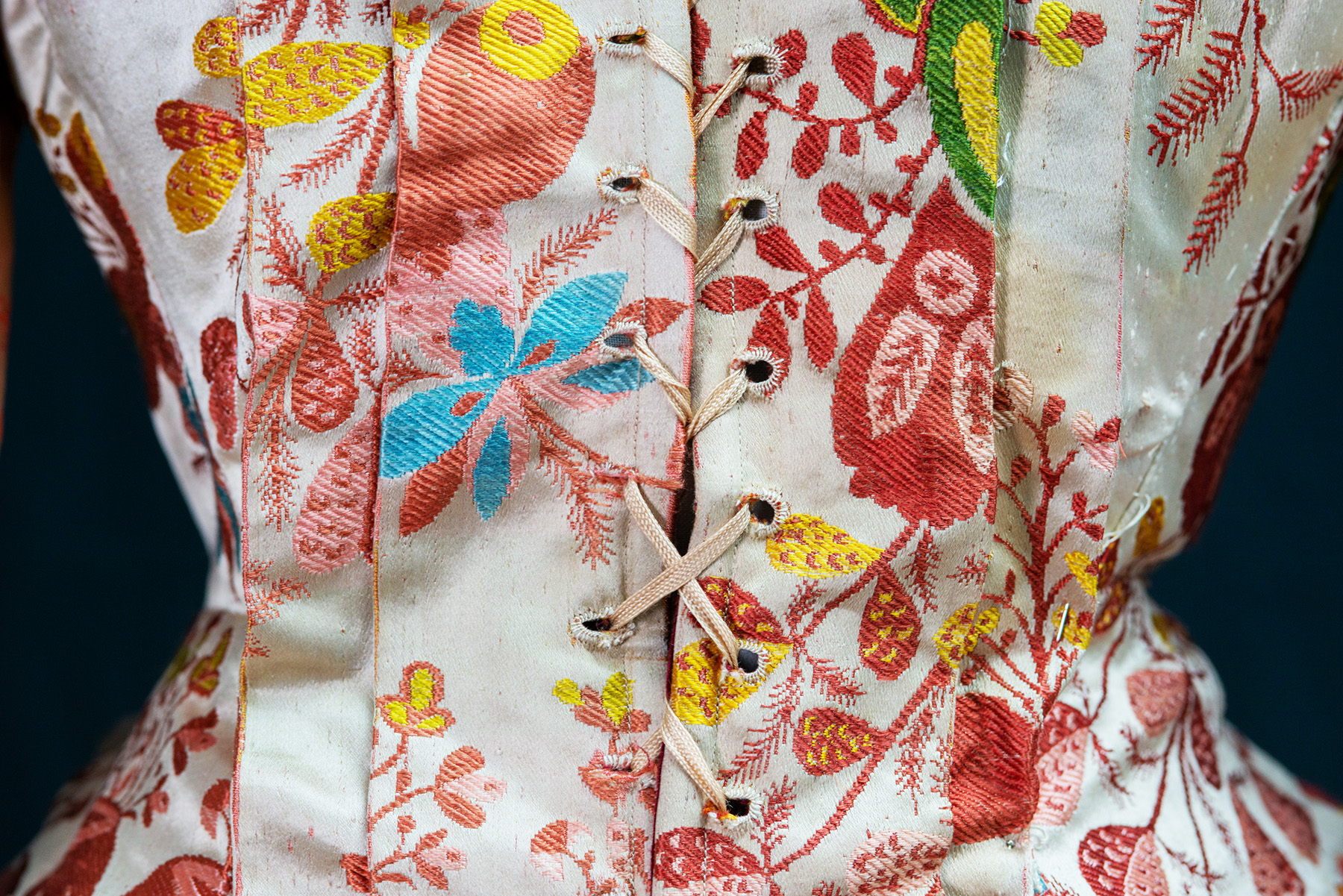 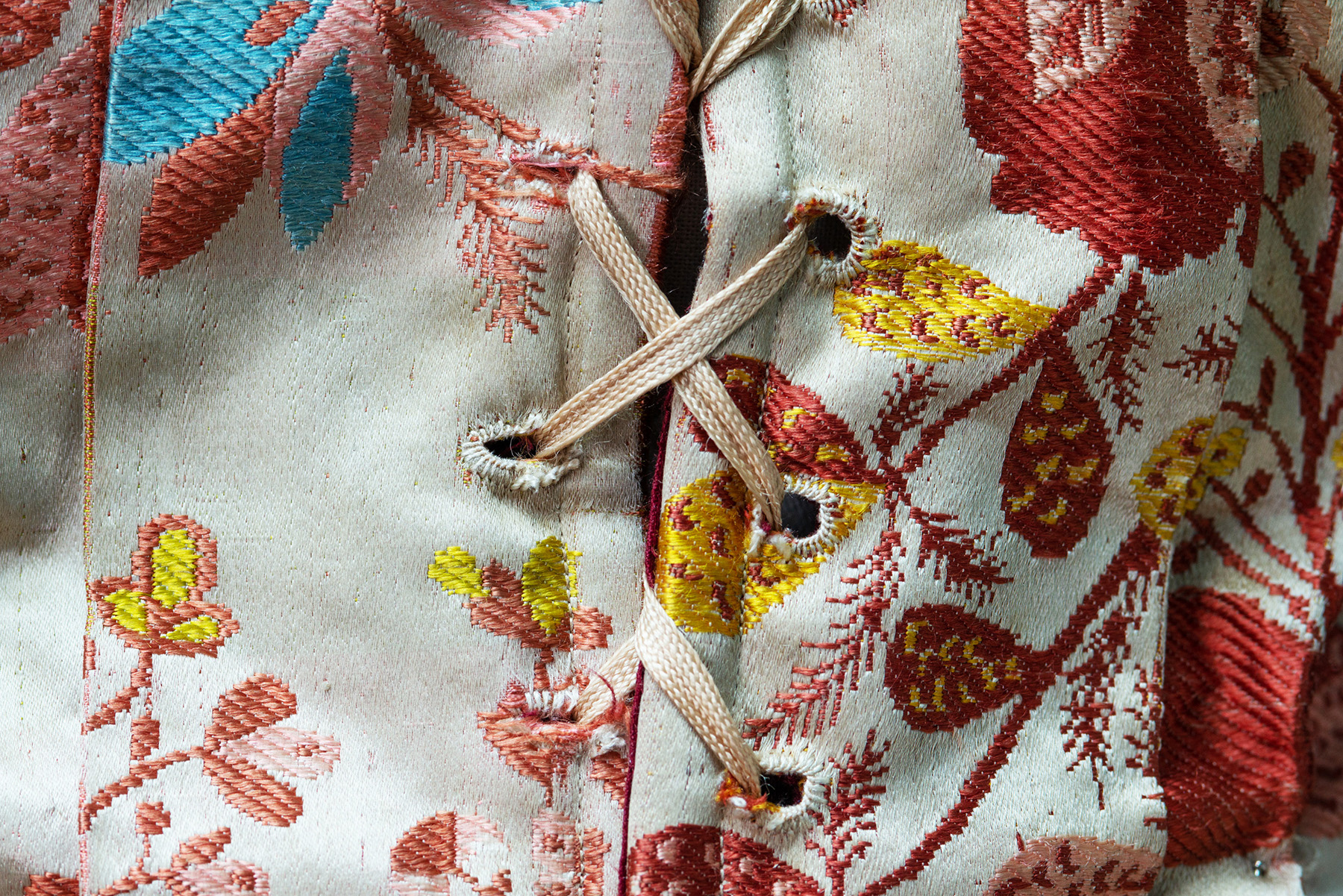 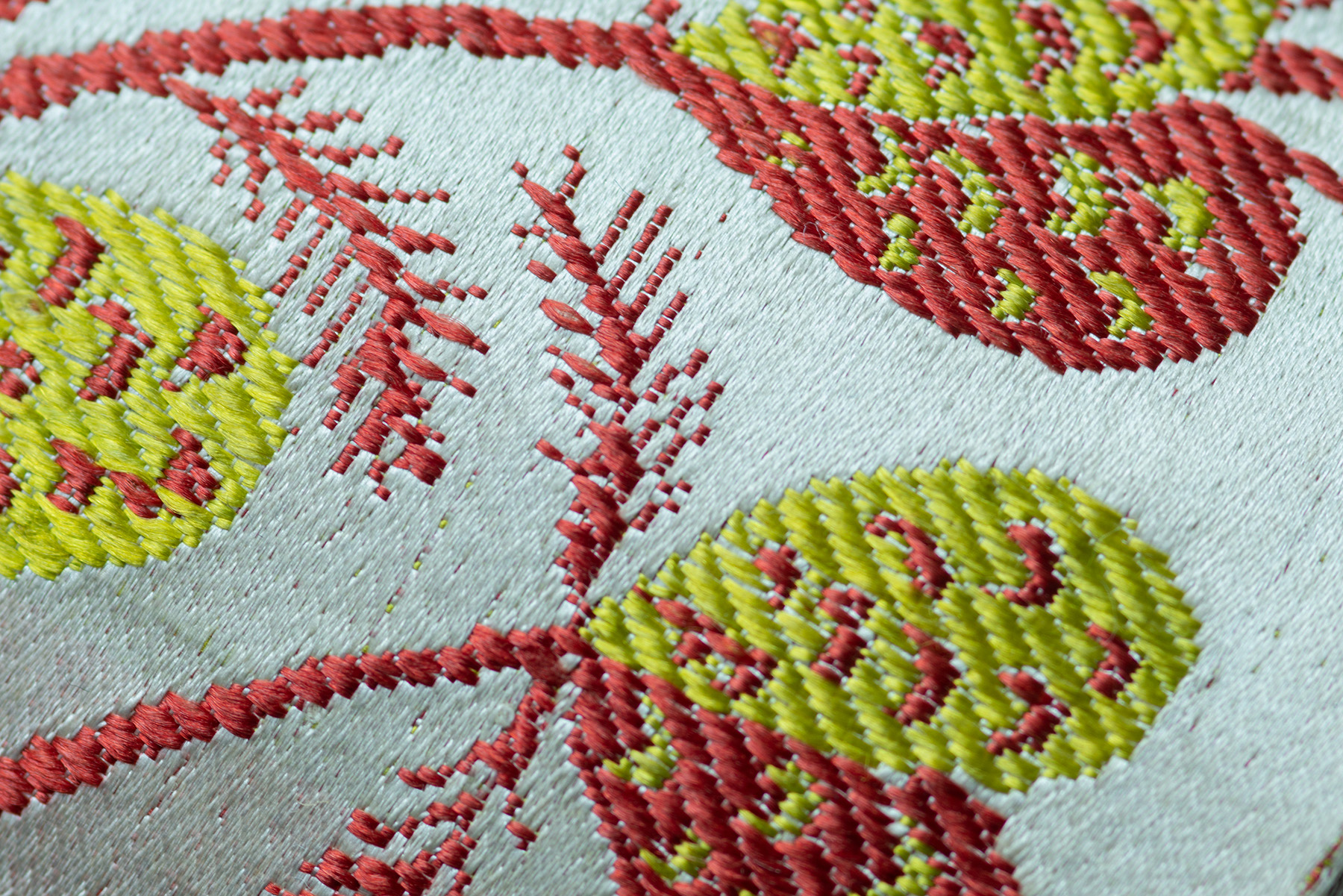 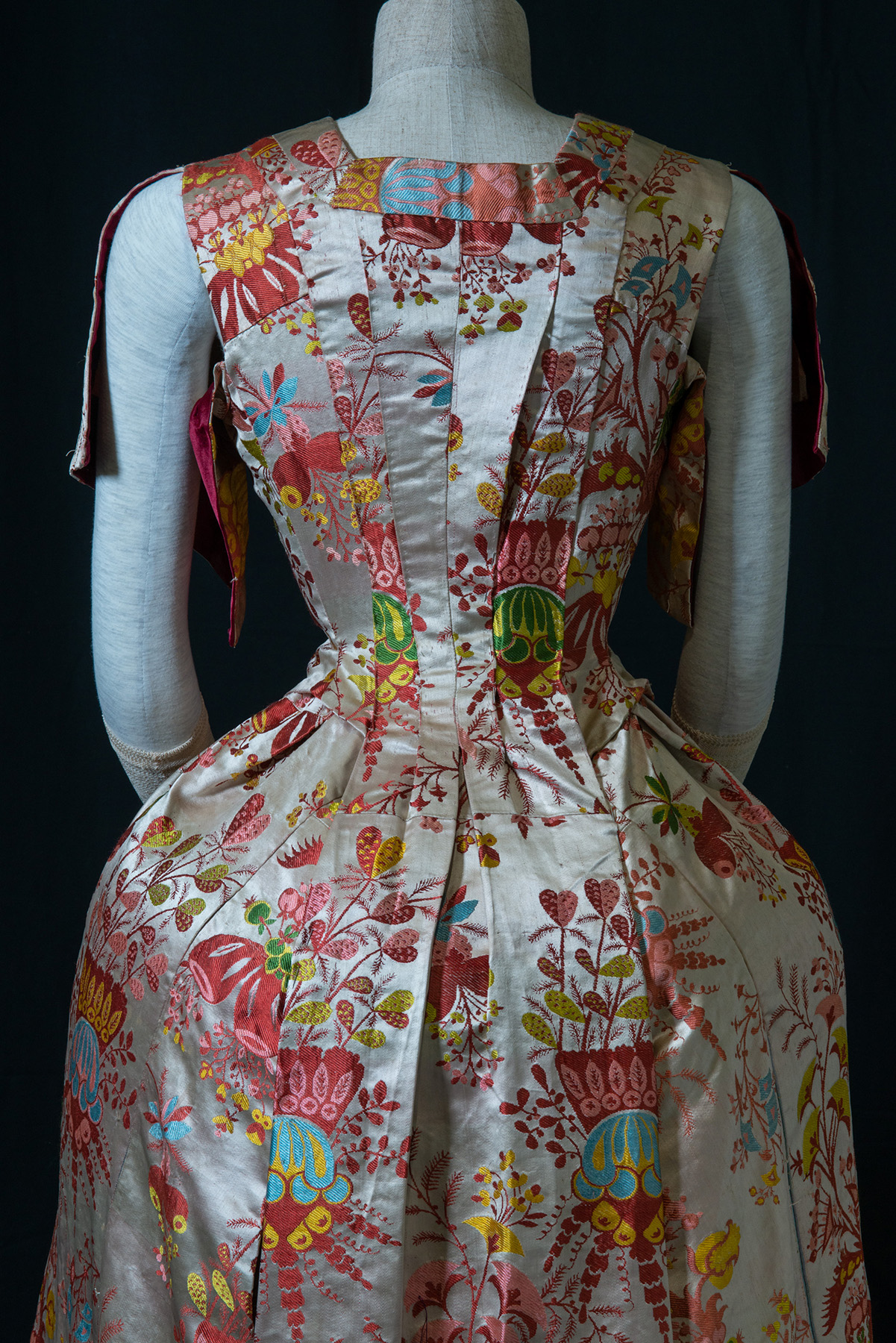 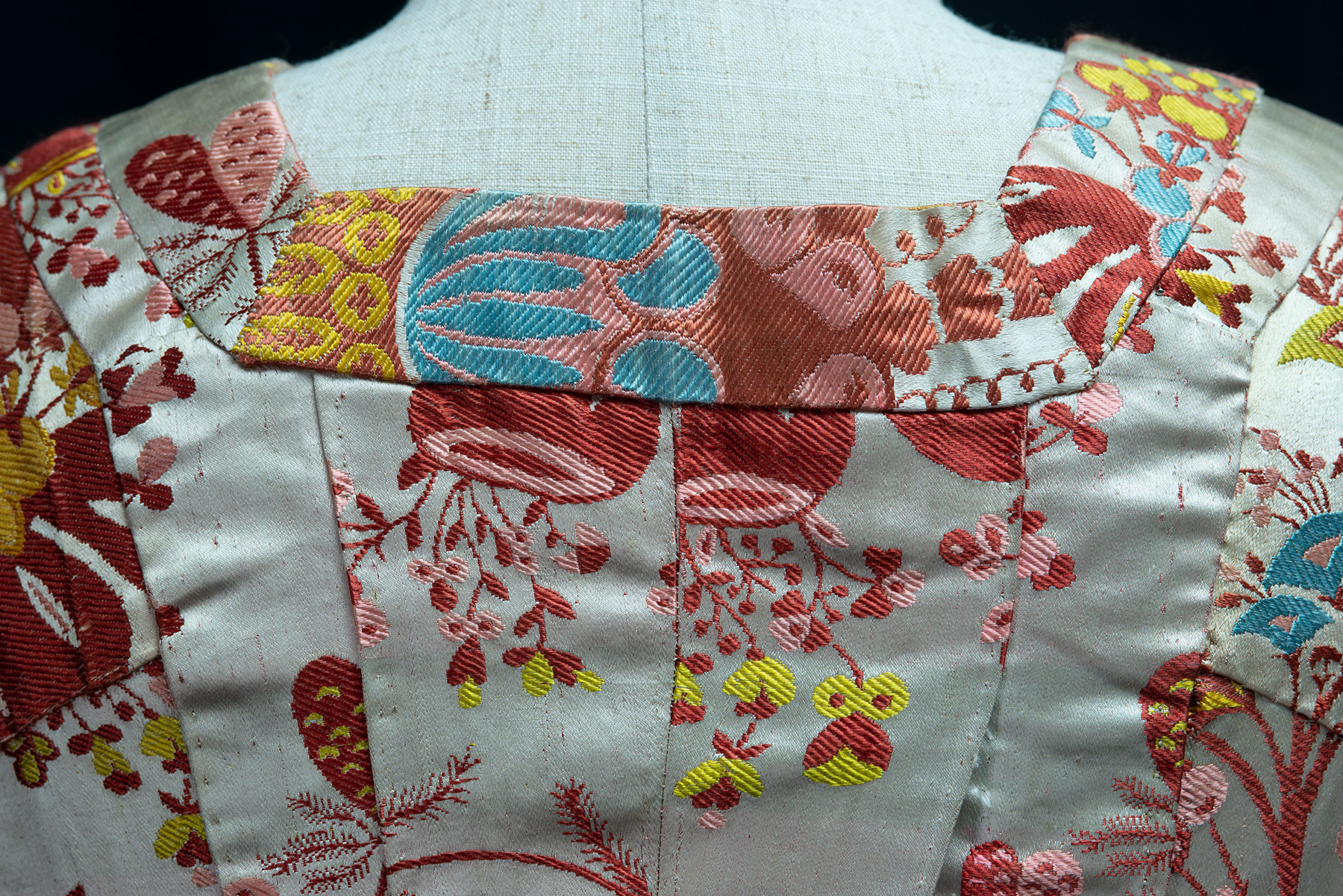 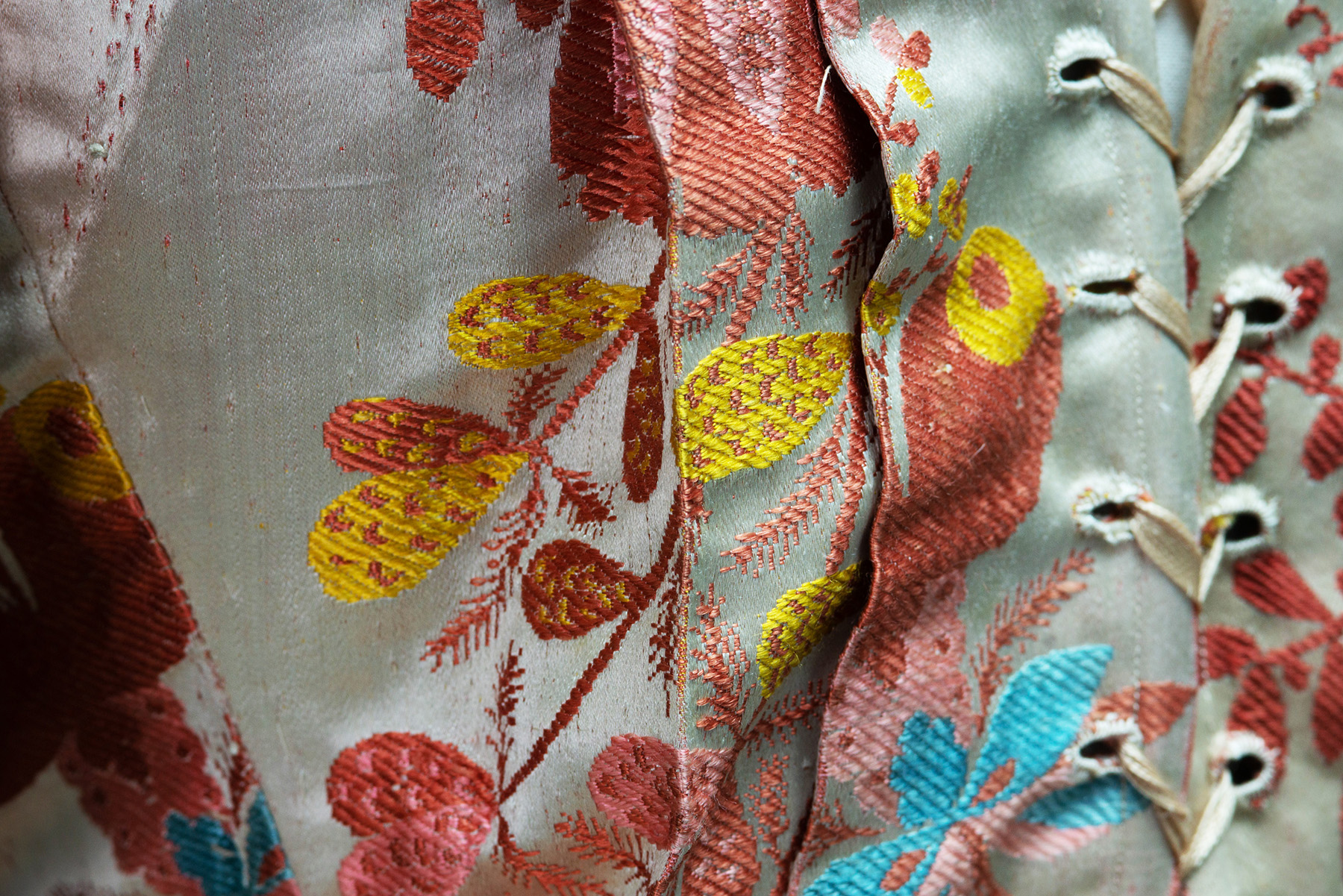 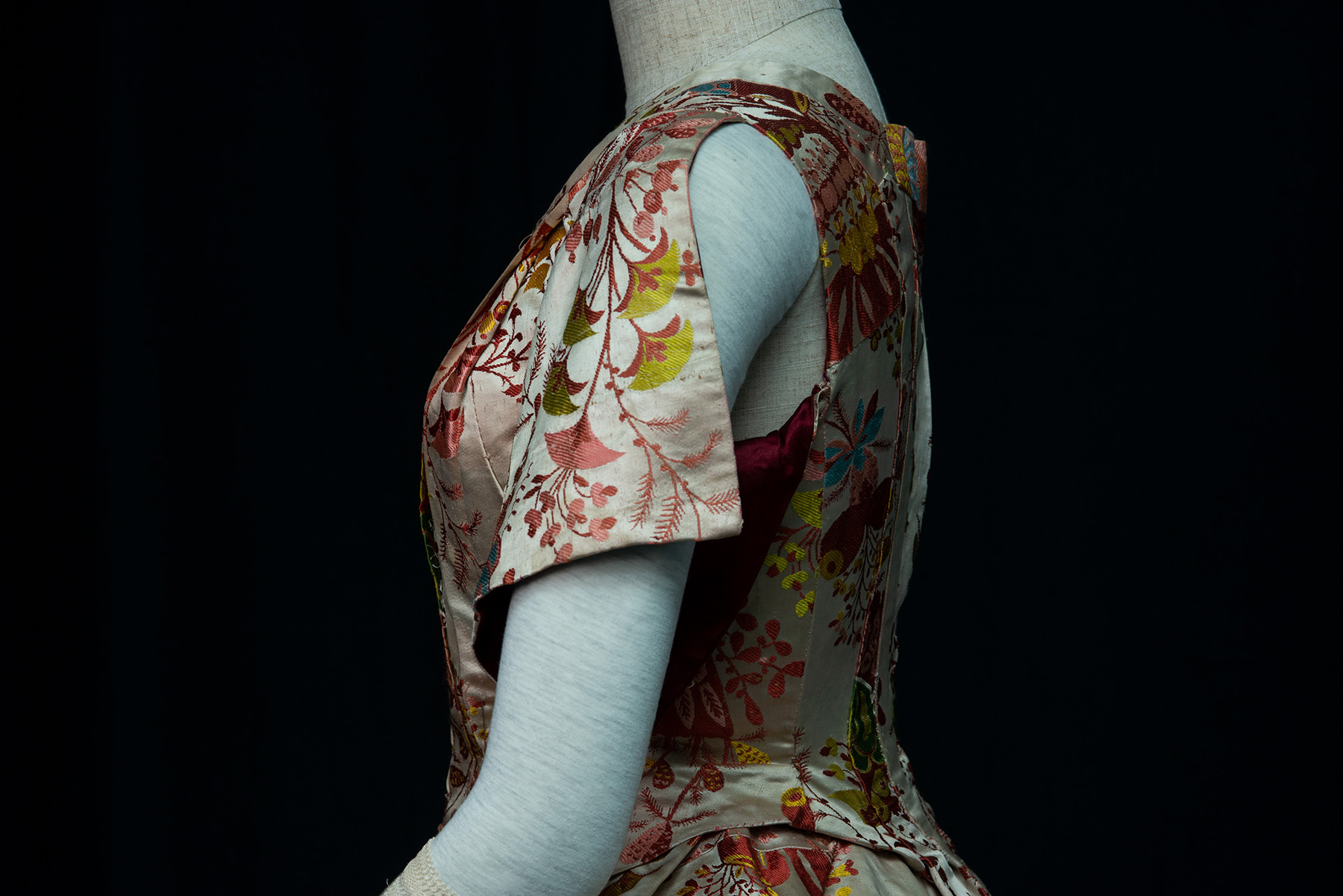 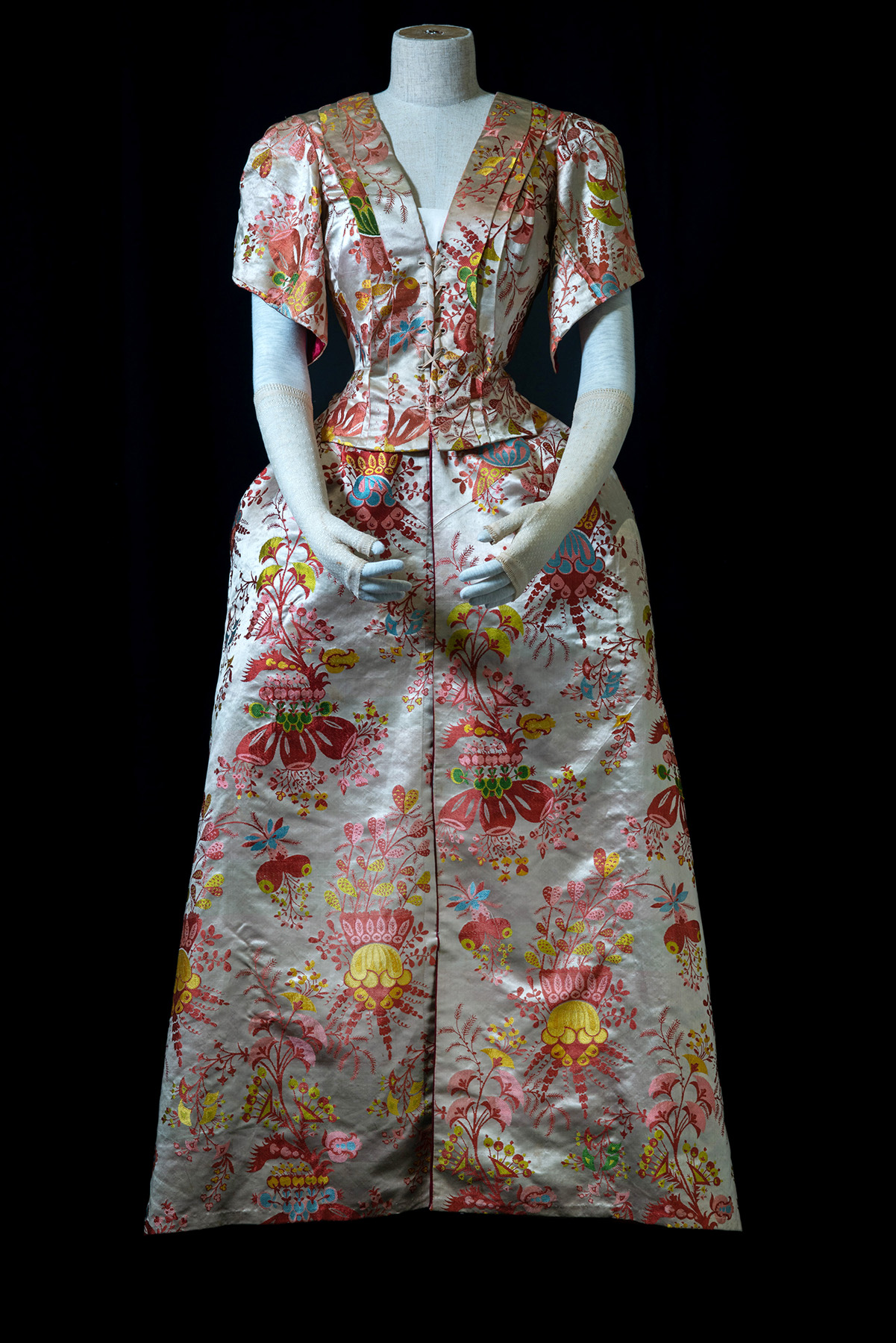 This beautiful silk brocade dress known as a ‘Mantua’, was made around 1710 and was the most fashionable gown style of the period. The dress has been altered at least twice, but the maker’s skill is still clear and the colours of the silk are nearly as vibrant and vivid as the day it was woven.

The silk is thought to have been woven between 1705 and 1710 in London Spitalfields. It may have been designed by James Leman, a highly regarded designer who came from a French Huguenot weaving family. This makes it also possible the silk was woven by his father’s firm. The silk design has two sets of exaggerated motifs arranged in alternating rows across a plain, ivory background. This exotic textile was extremely fashionable amongst the highest level of society. In the 1950s the term ‘bizarre silk’ was coined for this type of design that included bold fantastical motifs inspired by Asian textiles.

The dress originated with the family of Katherine Gray Houston and has been passed down through Katherine’s family to this day. Katherine was the daughter of John Gray of Overskibo, near Dornoch and his wife is believed to have been Katherine Fraser Ross of the family of Fraser of Achnagairn, with connections to the powerful Forbes family of Culloden. John was the second son of Alexander Gray, himself a second son of George Gray, owner of Skibo Castle. In 1695 Alexander acquired Overskibo, a substantial tenancy linked to the Skibo Estate.

Katherine was the youngest of John’s three children. She also had two older half-siblings from her mother’s first marriage. Her half-brother was George Ross of Pitkerrie and Cromarty served as Member of Parliament for Ross & Cromarty in the 1780s.

In 1738 Katherine Gray married Hugh Houston of Meikle Ferry, a soldier in Lord Lovat’s Company. Hugh mysteriously disappeared from records for eight years, which begs the fascinating question as to what he was doing during that time. The couple’s first son, John died in infancy. Their second child also named John, was born in 1747 and was followed by at least seven siblings who were all girls. One daughter, named Anna, went on to marry another Hugh Houston, this time of Creich and Clyne.

Family lore says that Katherine’s dress was worn to a ball attended by Bonnie Prince Charlie. This may have been at Culloden House where the Prince stayed in February and March 1746. The dress is made of such fine fabric that it would have only needed small alterations to update it and make it appropriate formal attire for a woman of her status mixing in such company.

In the late 1700s fashions changed towards a slimmer silhouette and the dress was altered a second time, including the removal of the original train. In 1880, Katherine’s three times great-granddaughter Katy Sanders, wore the gown to a fancy-dress ball. It was probably around that time that the bodice was shortened and altered to close with handsewn eyelets.

In 1956 the dress found its way to Australia and the home of sixteen-year-old Barbara Francis, a direct descendant of Katherine. The dress will eventually be passed on to Barbara’s granddaughter in Switzerland. 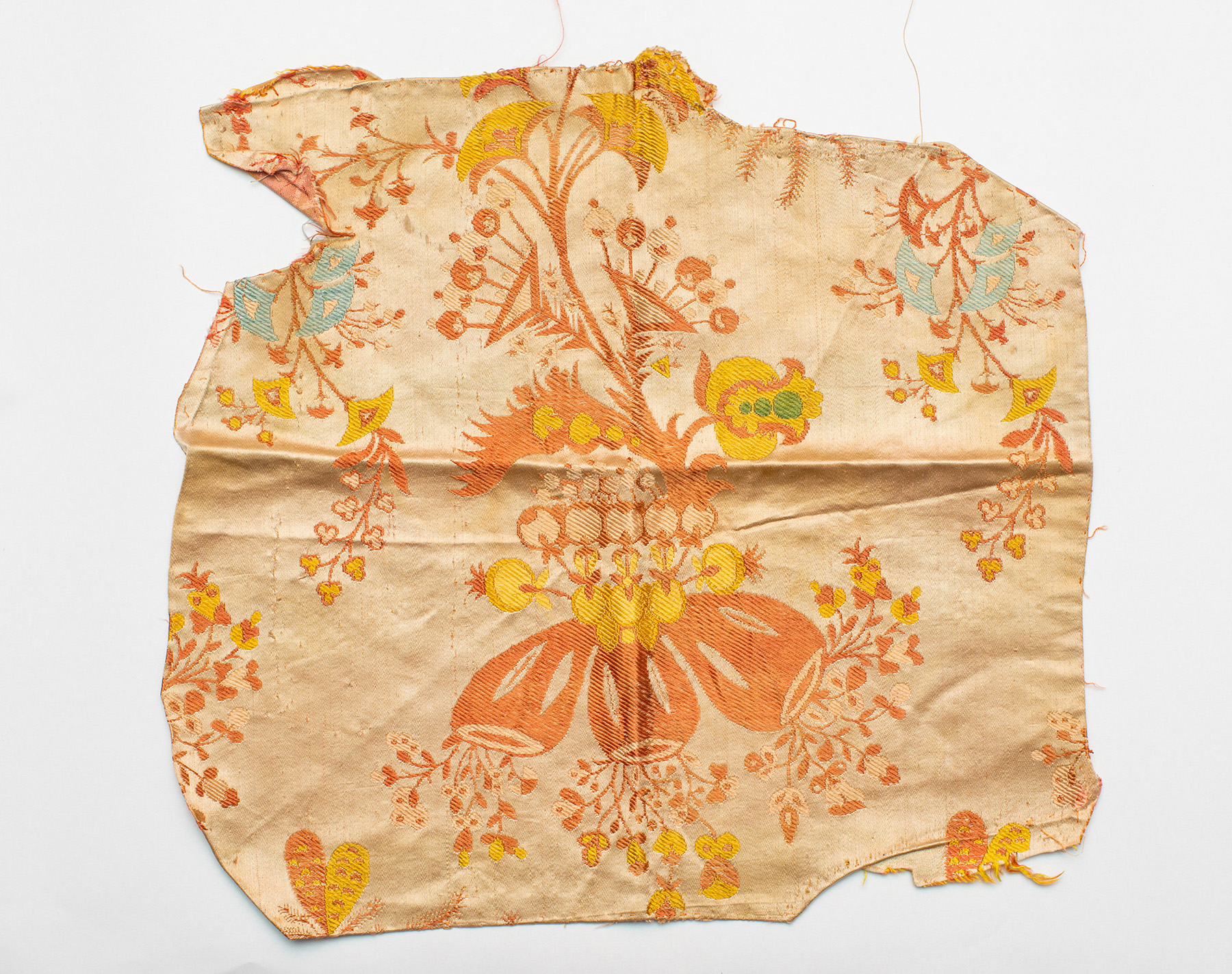 Historylinks is an independent museum run by the Dornoch Heritage SCIO. Keeping the Dornoch Story Alive