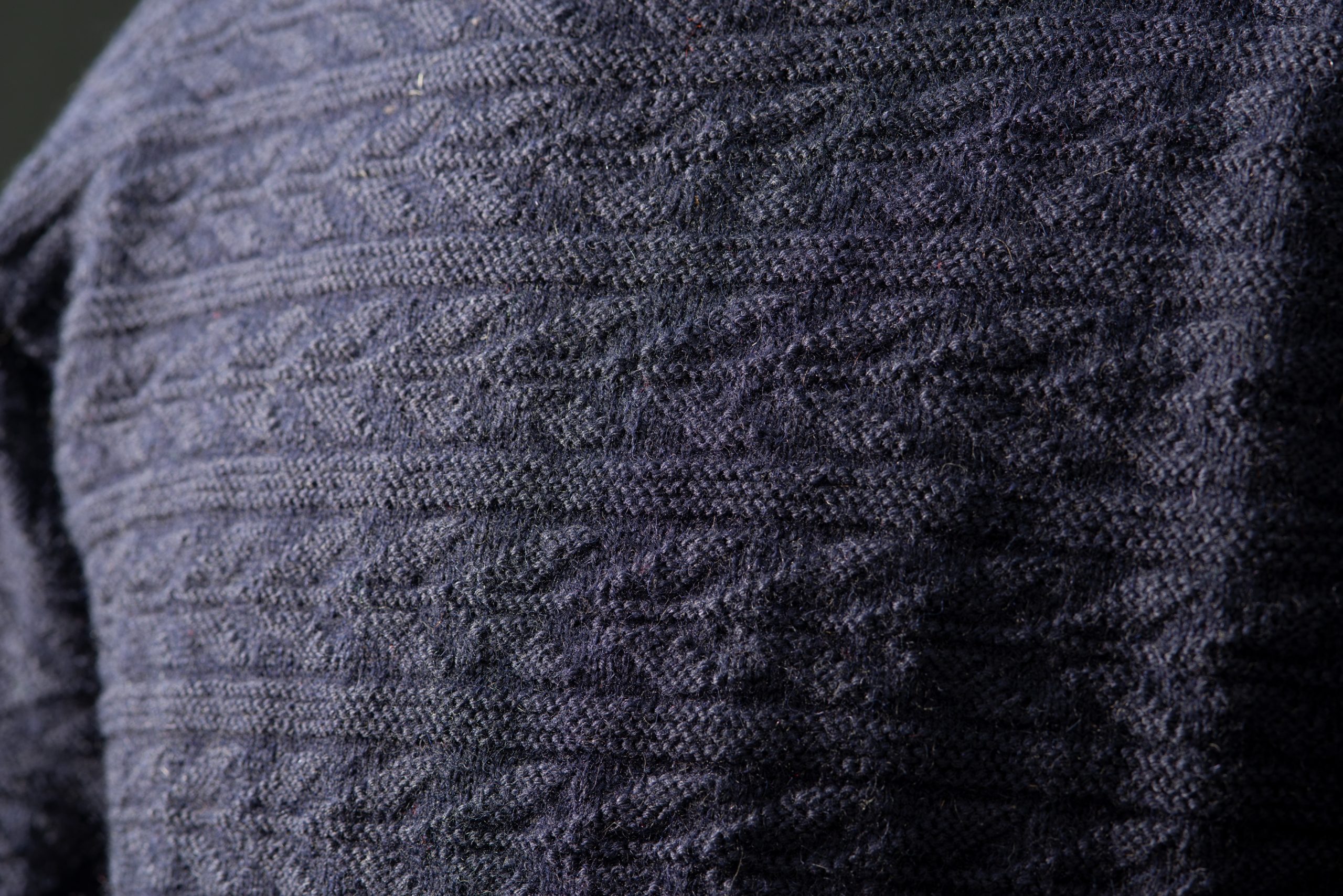 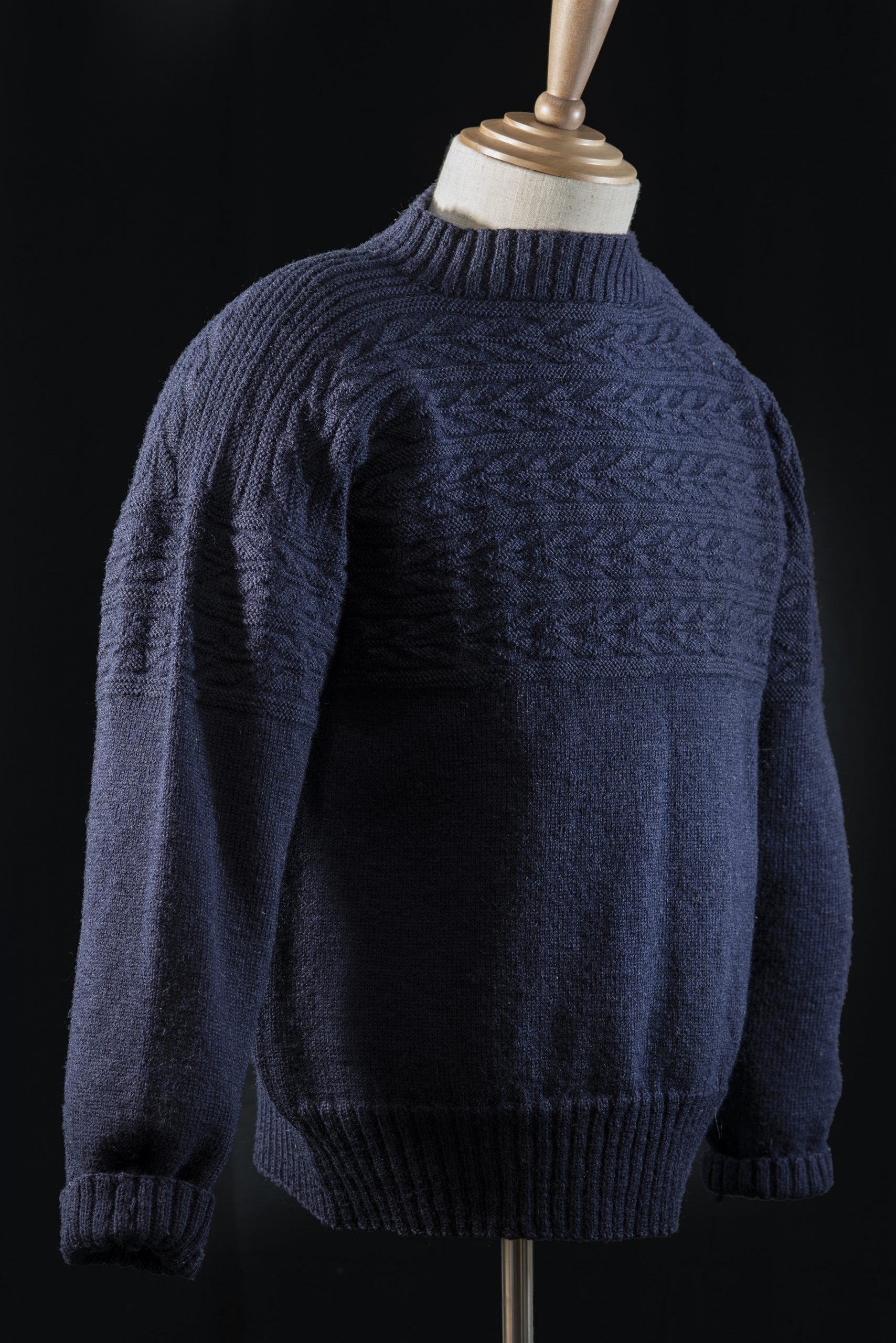 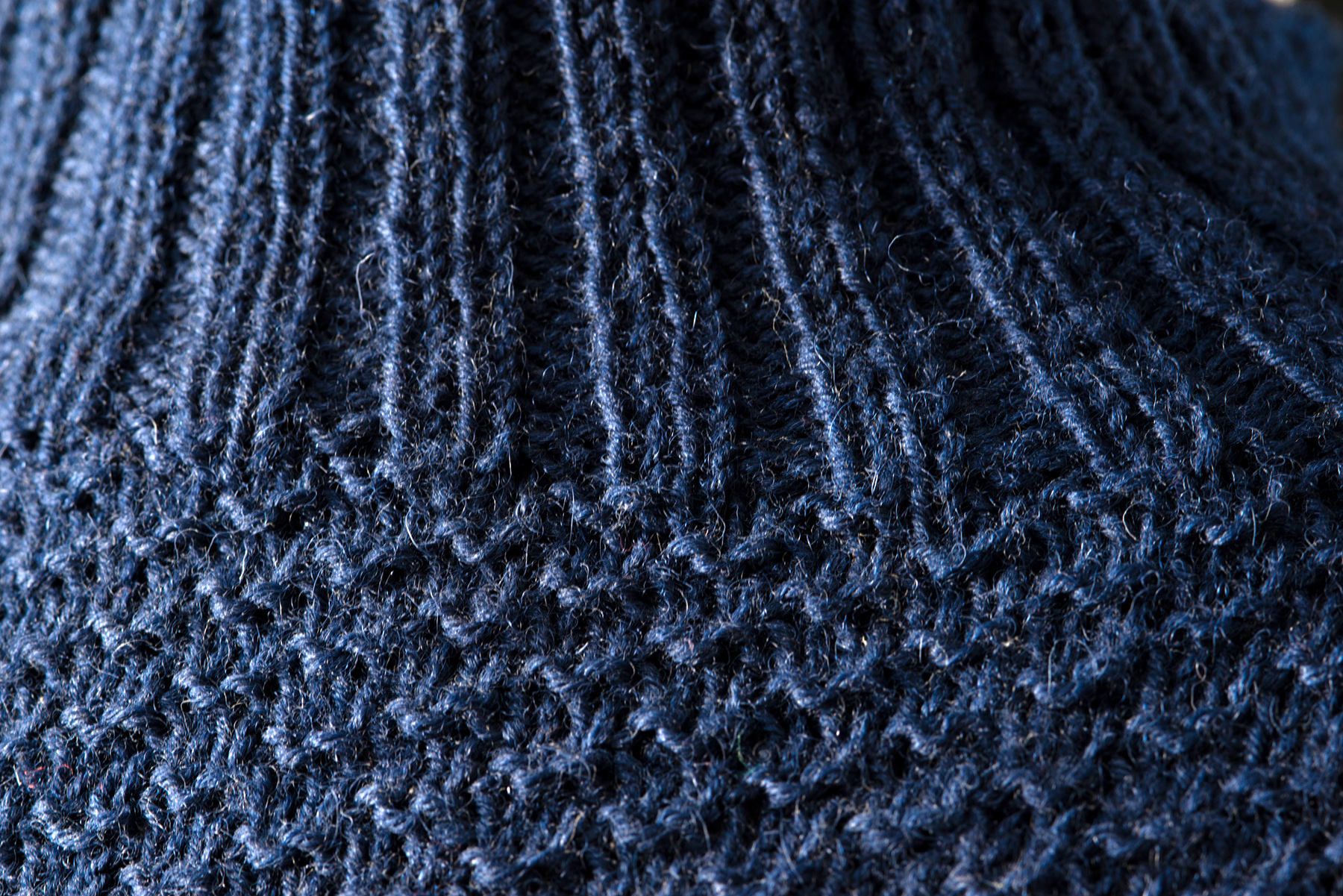 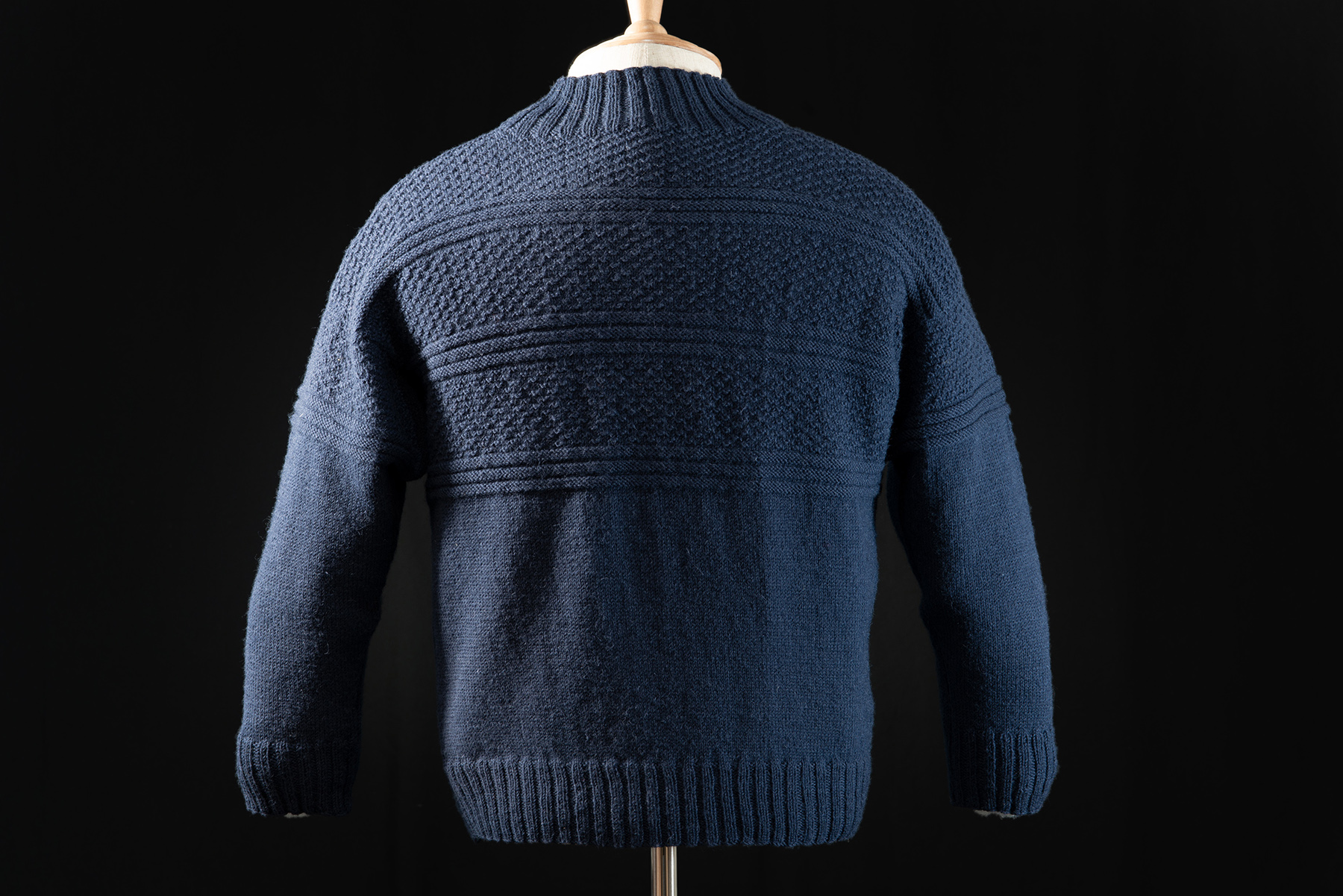 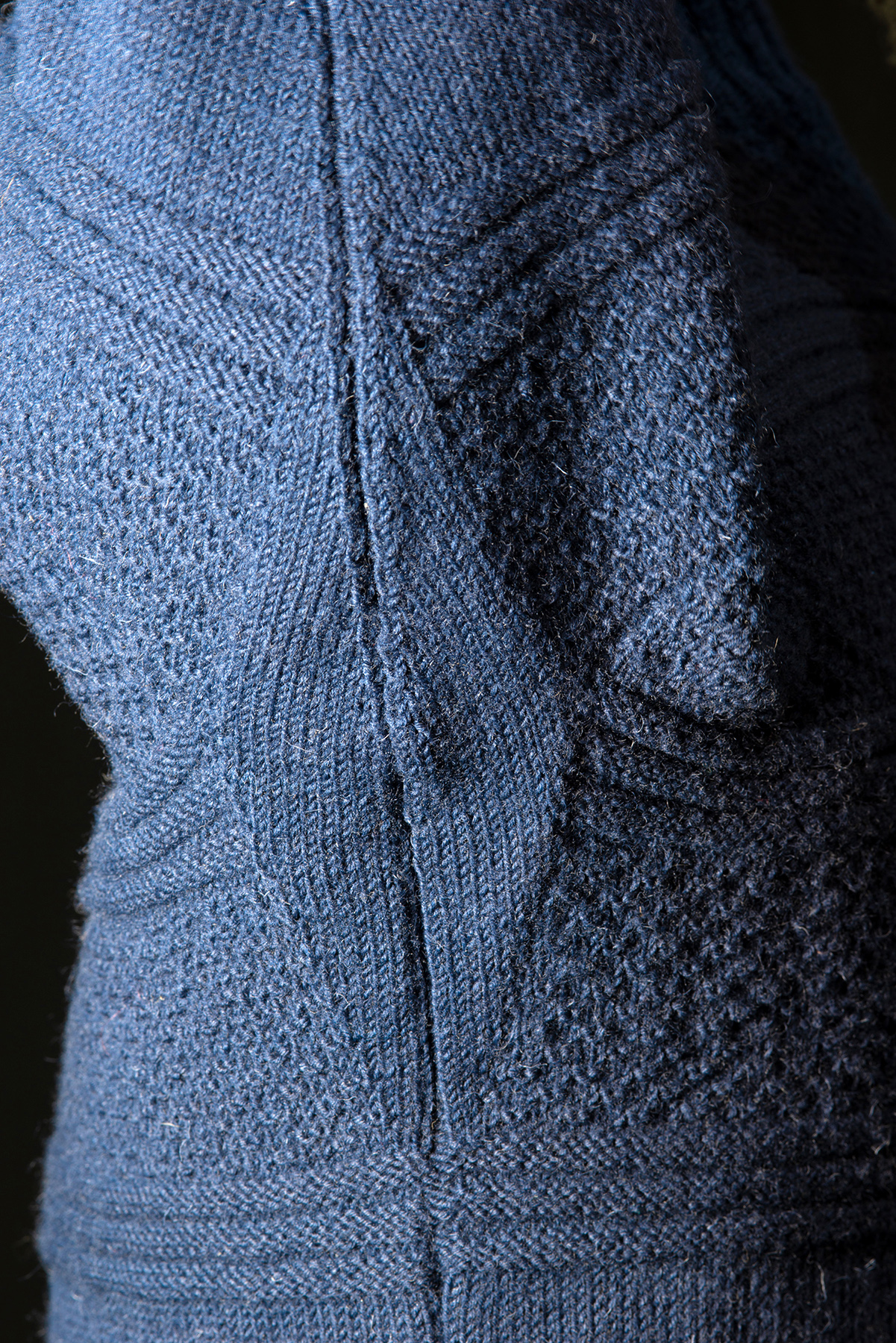 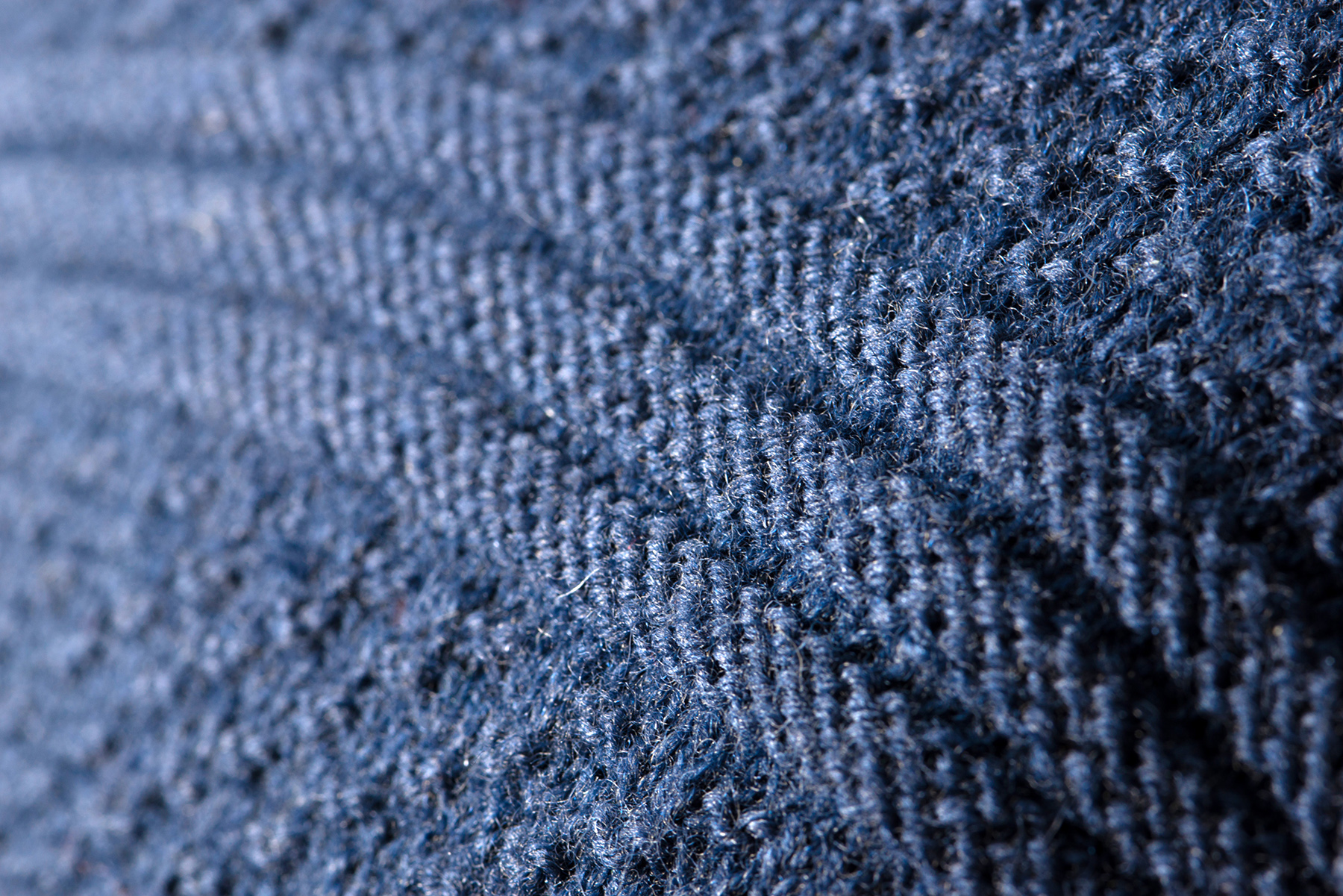 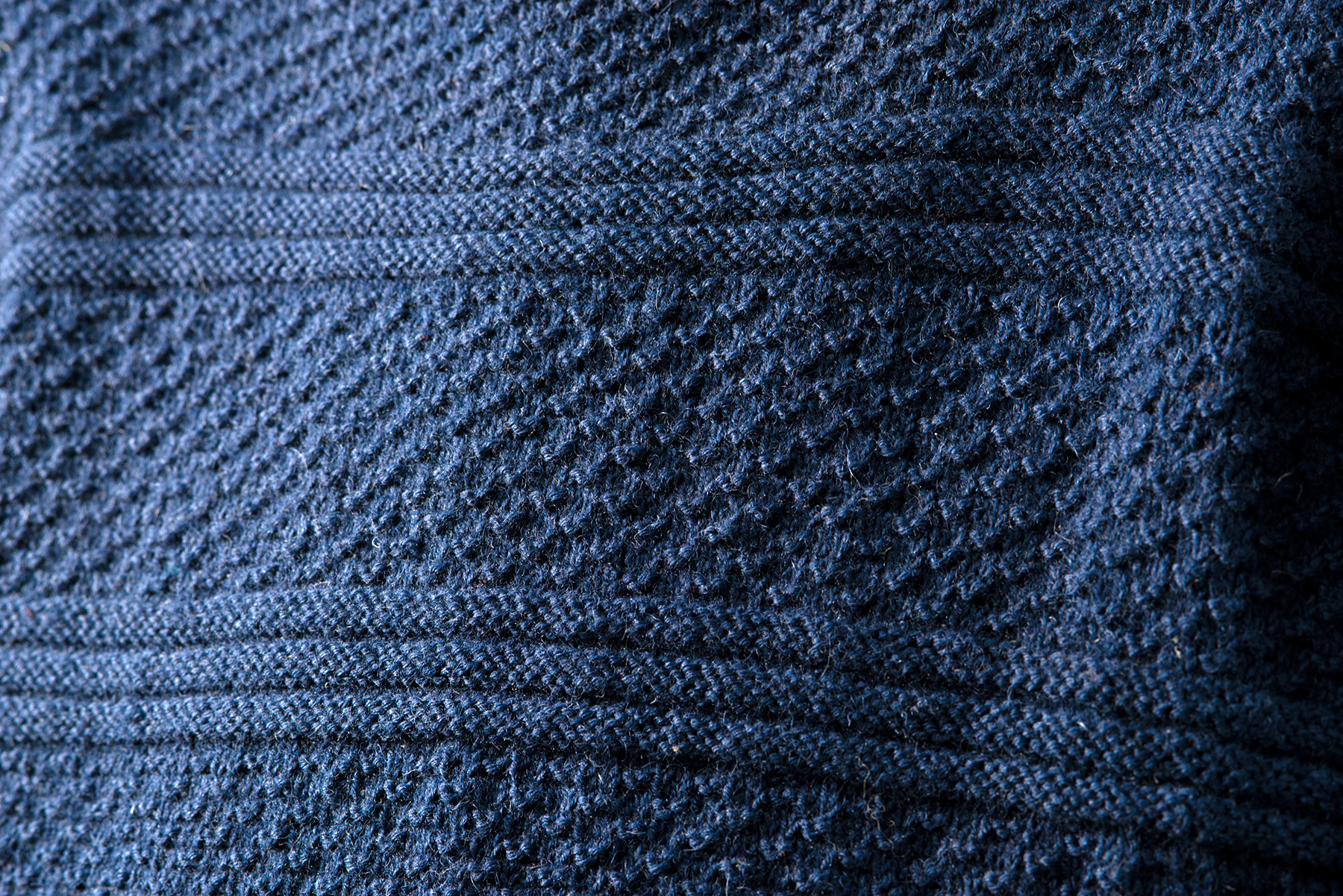 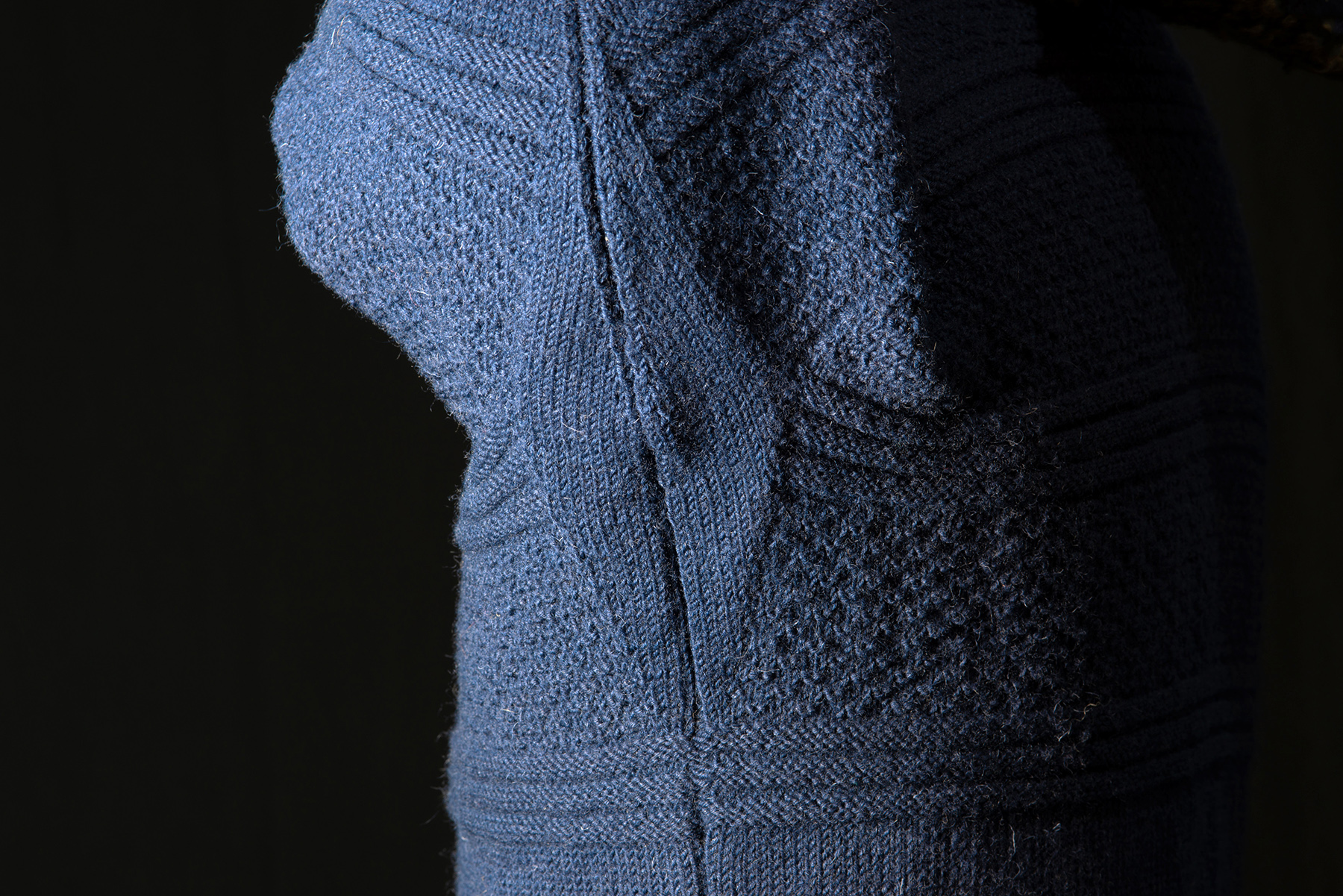 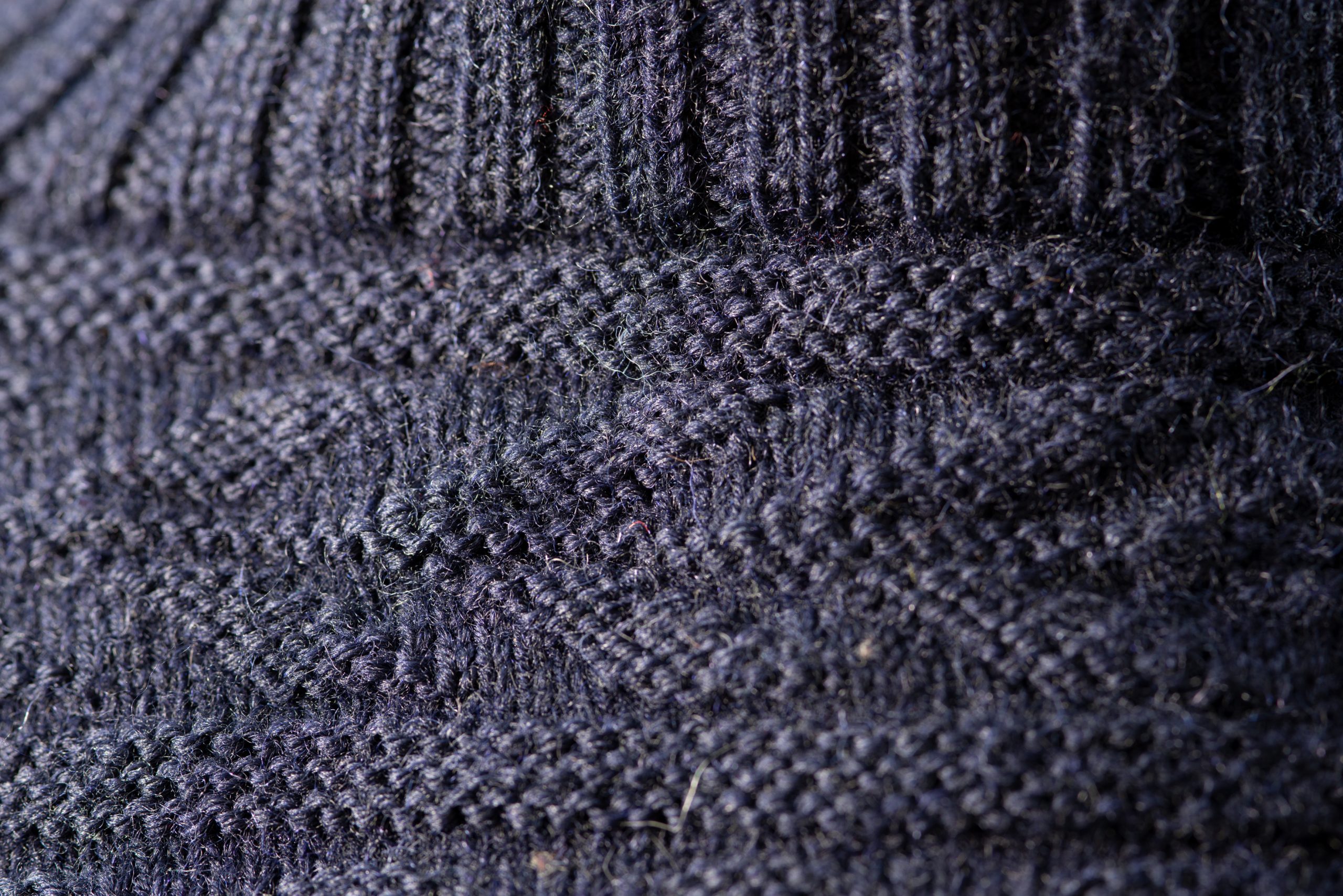 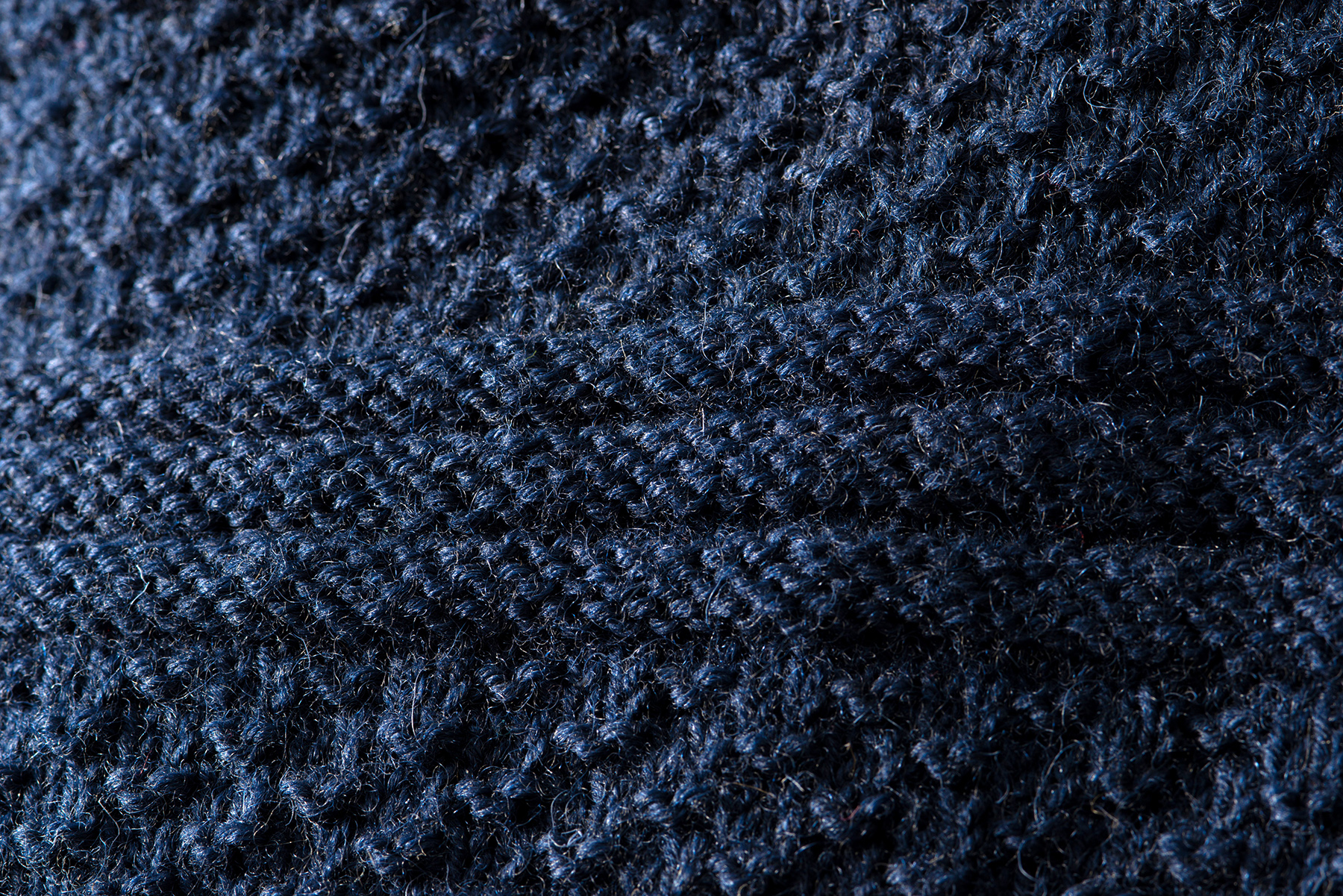 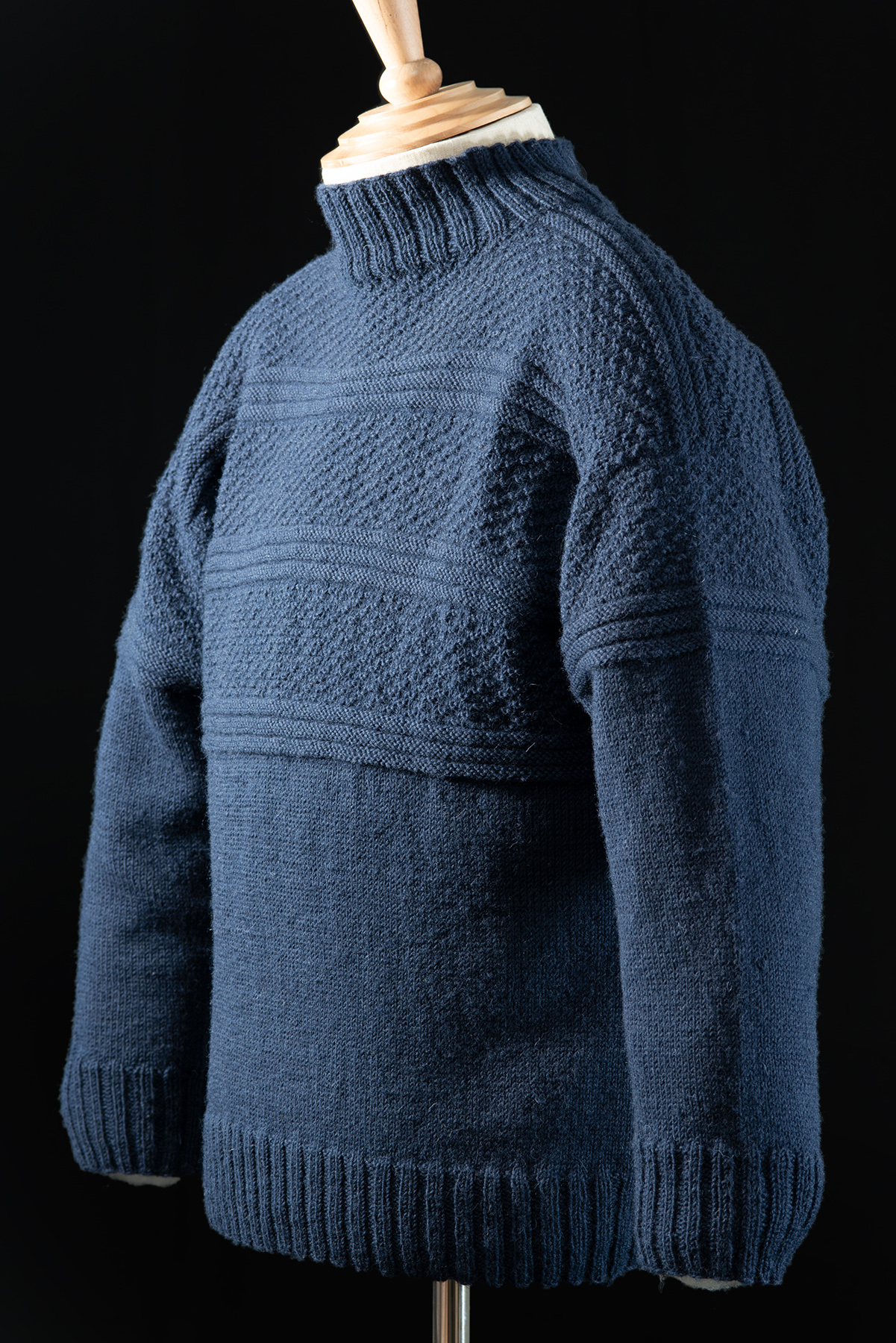 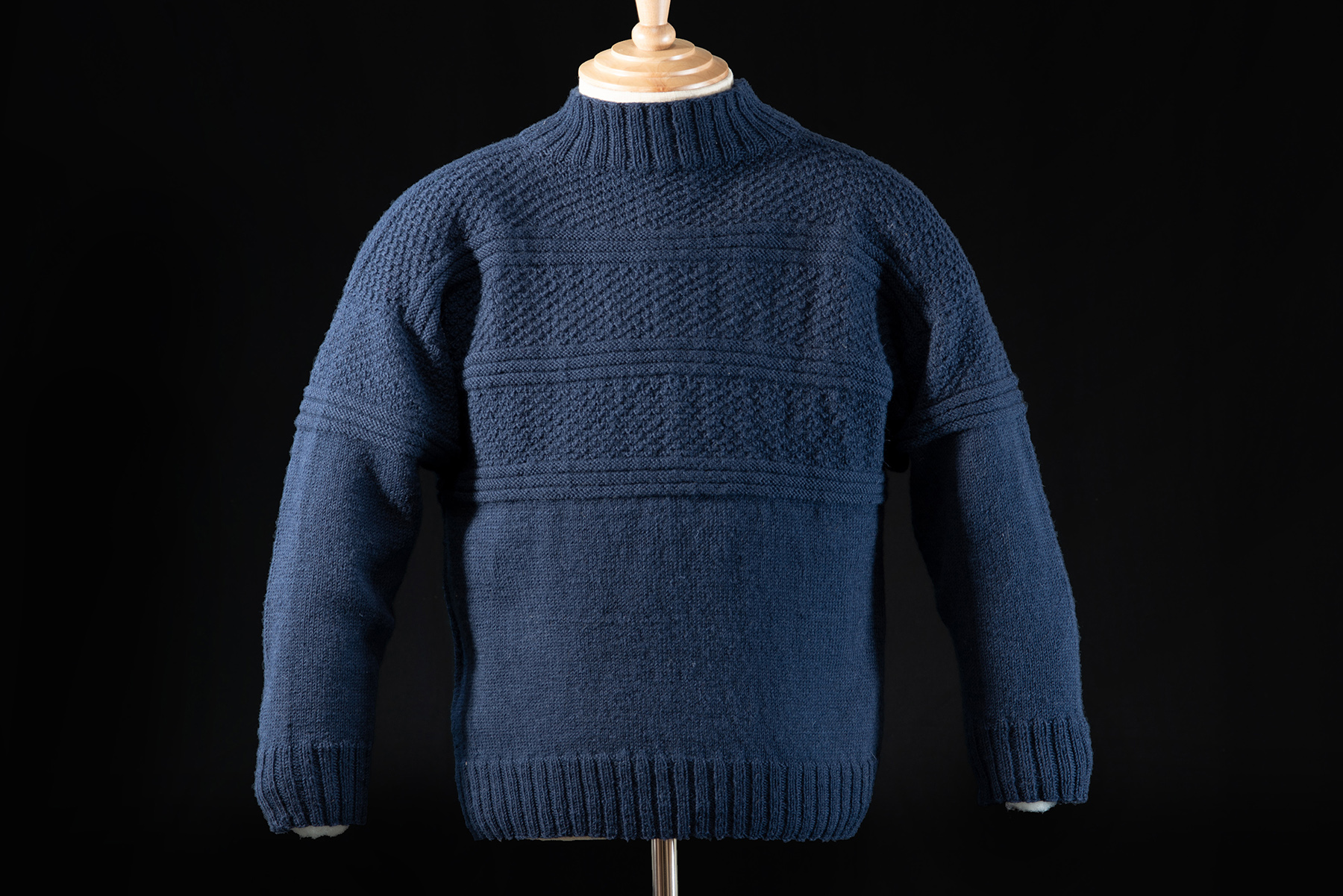 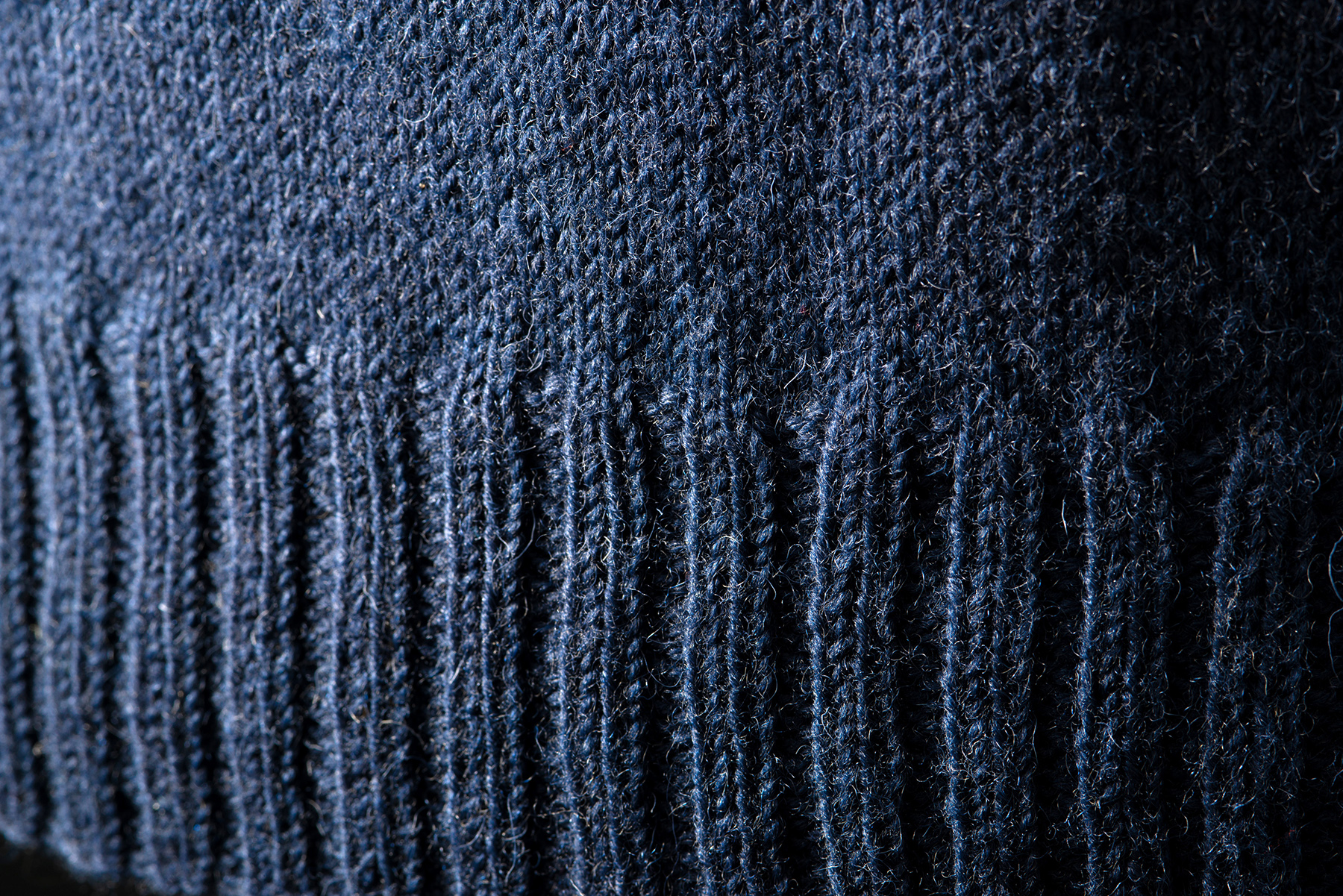 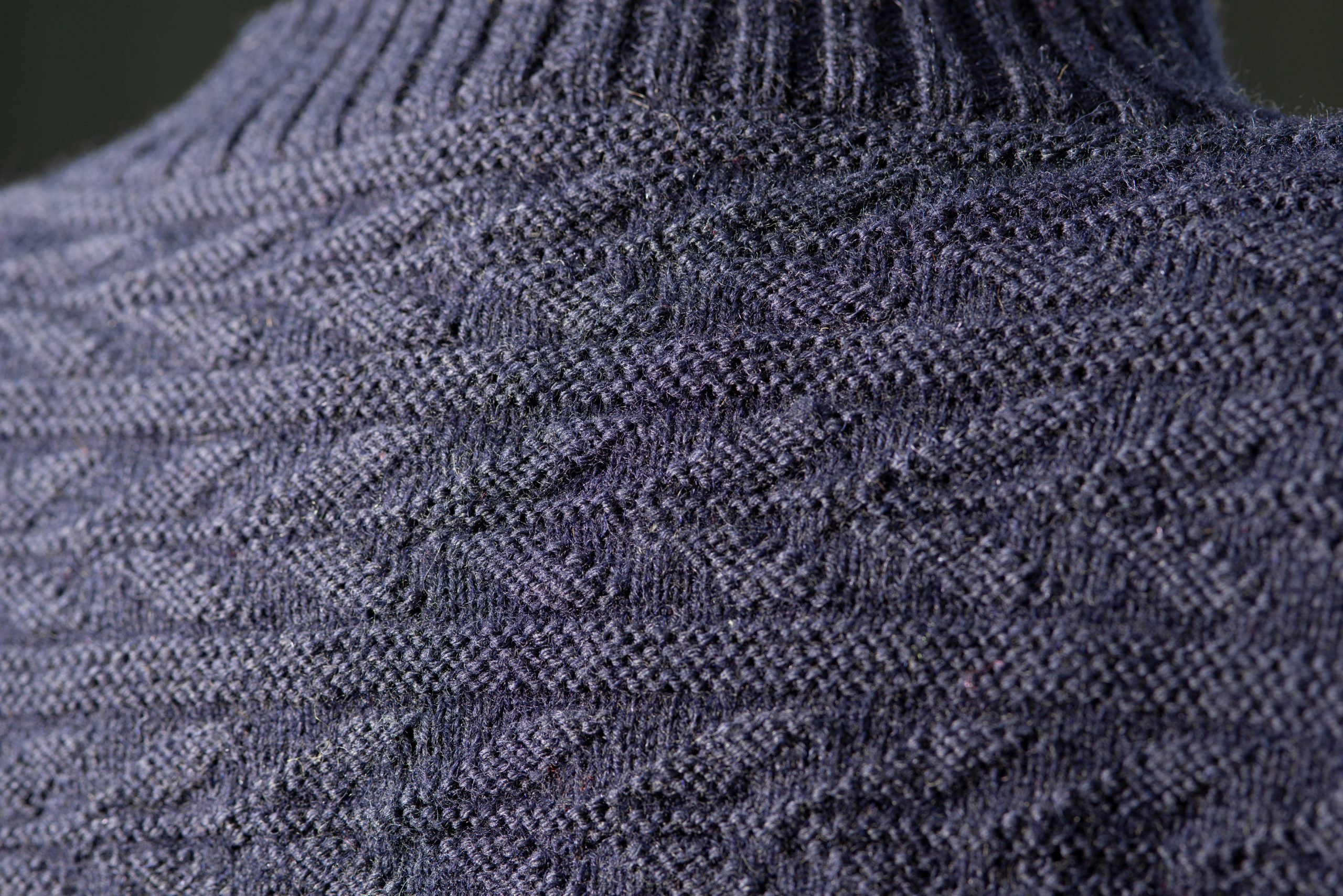 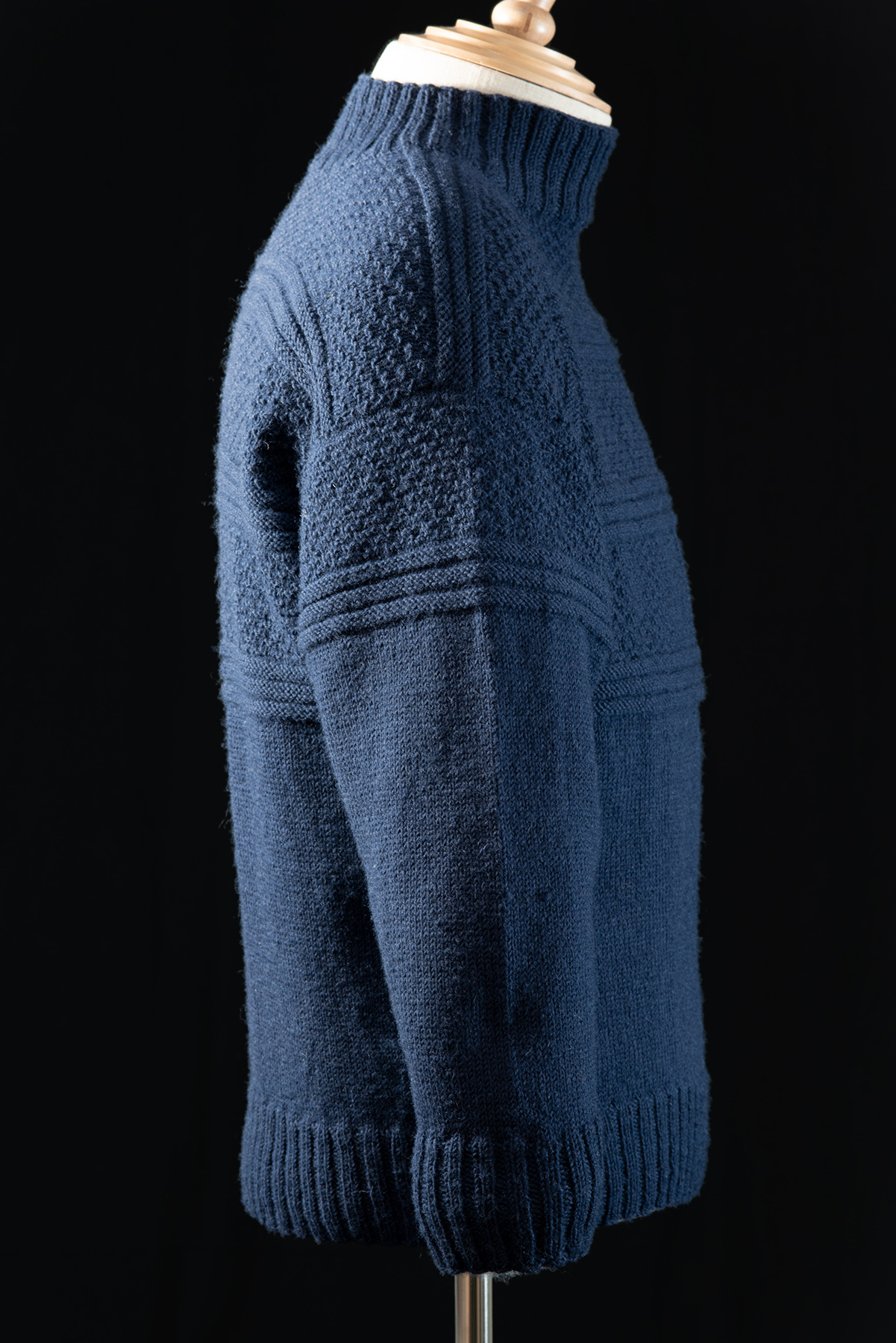 This warm and largely waterproof jumper is a Wick gansey. The name ‘gansey’ is given to traditional hand knitted pullovers worn by fishermen in coastal communities around the British Isles, particularly in the 1800s and early 1900s. The gansey is a perfect working garment because it is less constricting than a jacket but warm and hardwearing against wind and rain.

This piece is on display and the museum will open in June. Visit our website for more details and to plan your Highland Threads tour!

Ganseys were traditionally knitted by women and have certain unique features. The gansey is usually navy blue and is knitted using Guernsey 5-ply wool. This fine yarn knits up very tightly and its nickname ‘fisherman’s iron’ captures the sense of how robust and hardwearing the finished garment is.

Ganseys are almost always knitted with basic knit and purl stitches, but often combined to make beautiful and intricate designs. The main body of the jumper is created with a stitch pattern of knit2 purl2, and Caithness and Wick ganseys s often had this ribbing up to the armpits. The most distinctive feature of the gansey is the elaborate patterning on the chest or ‘yoke’ of the garment. ‘Trees’, zigzags and cables are common designs as were some regional associations such as the Scottish flag. These patterns were more than just decorative. The combination of knit and purl stitches produce tiny air pockets to keep the chest warm and gave the garment a snug fit. Some histories suggest that gansey patterns were unique to the wearer. The theory was that if a fisherman fell overboard, his body could be identified by the gansey pattern. This is likely a myth although certain distinct patterns did originate from within local communities.

Ganseys are very robust because the garments have very few joins. The garments are knitted from the bottom up knitted ‘in the round’ as a series of tubes. The body is started at the bottom and worked up to the armpits. The stitches are then divided and each half is knitted up to the shoulders, then rejoined by knitting the two pieces together. The collar is knitted as another tube created by picking up stitches around the neck and working from the bottom up. The sleeves are knitted from the shoulder down as tubes, ending in a ribbed cuff. The sleeves were traditionally short and ended above the wrist which stopped the knitted cuffs chafing the skin. Ingenious diamond shaped underarm gussets gave the wearer freedom of movement and allowed fishermen to lift their arms to haul in nets without the jumper riding up over the hips.

Many Wick and Caithness ganseys are depicted in The Johnston Photographic Collection. This remarkable collection of more than forty thousand glass plate negatives is held in trust by the Wick Society. The collection represents the work of three generations of Caithness photographers who captured images of life in the area between 1863 and 1975. The Johnston family captured an era when Wick was the herring capital of Europe and among the images are many photographs of fishermen wearing ganseys. Such is the quality of many of the glass plate negatives that every individual stitch can be seen. Little was known about the gansey patterns associated with Caithness until the Johnston Photographic Collection became available online. Wick Society volunteers have identified around fifty different patterns through studying the photographs and local knitter Gordon Reid has recreated some of these in contemporary ganseys.

Since 1971, the Wick Society has striven to protect and promote Wick’s history.

You can purchase images from the
Johnston Collection here:

Help WICK HERITAGE MUSEUM work through the pandemic closures by Paying It Forward.