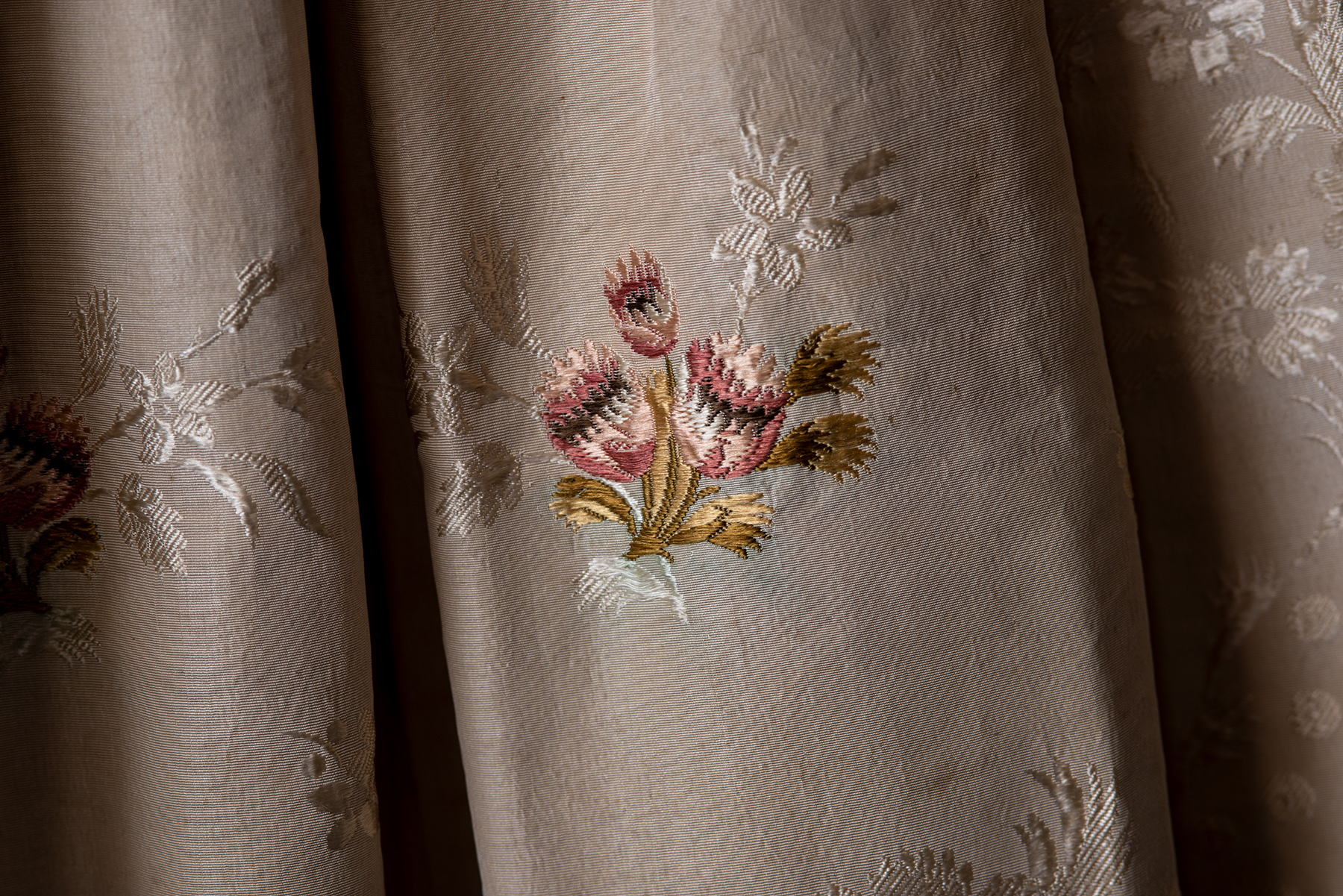 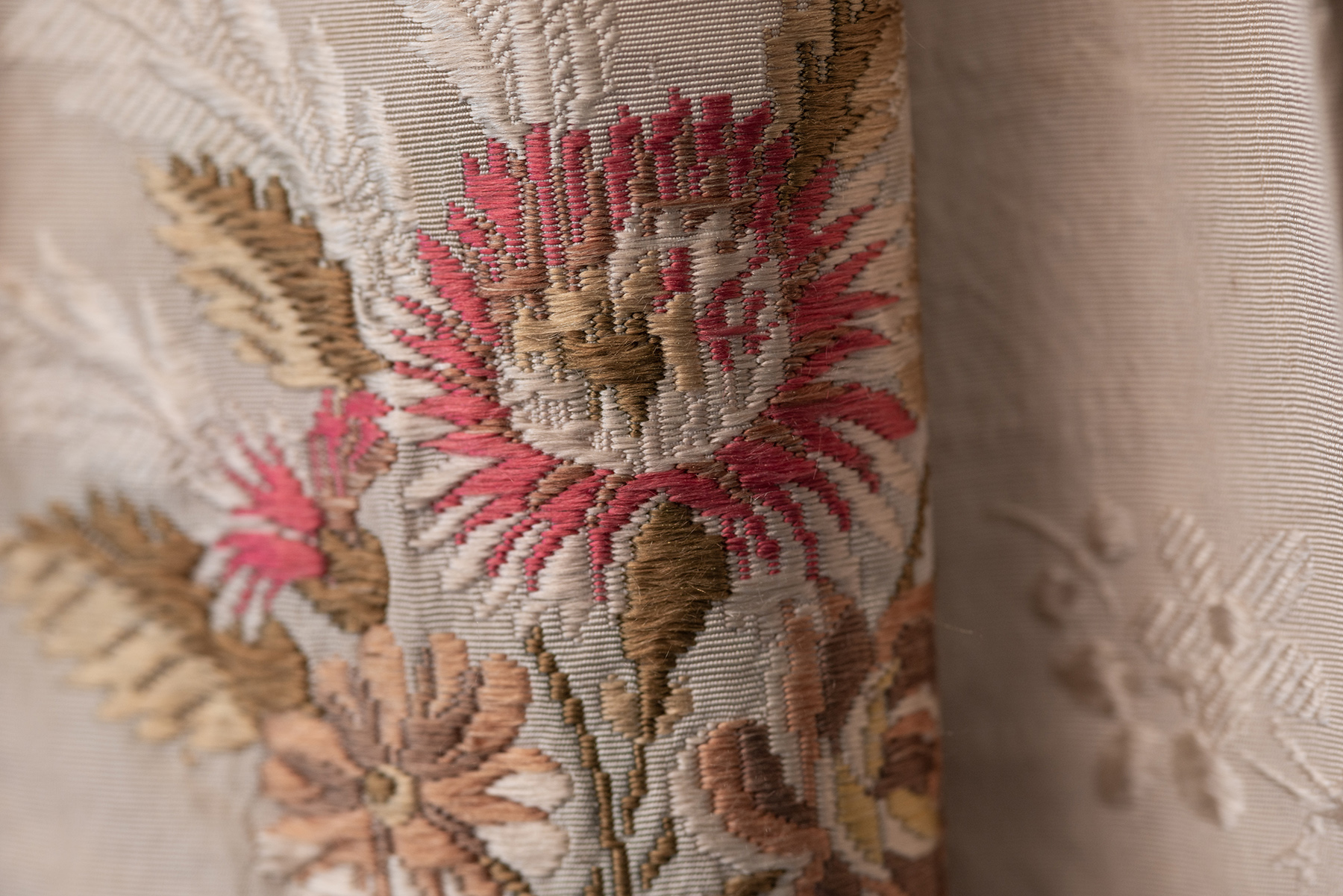 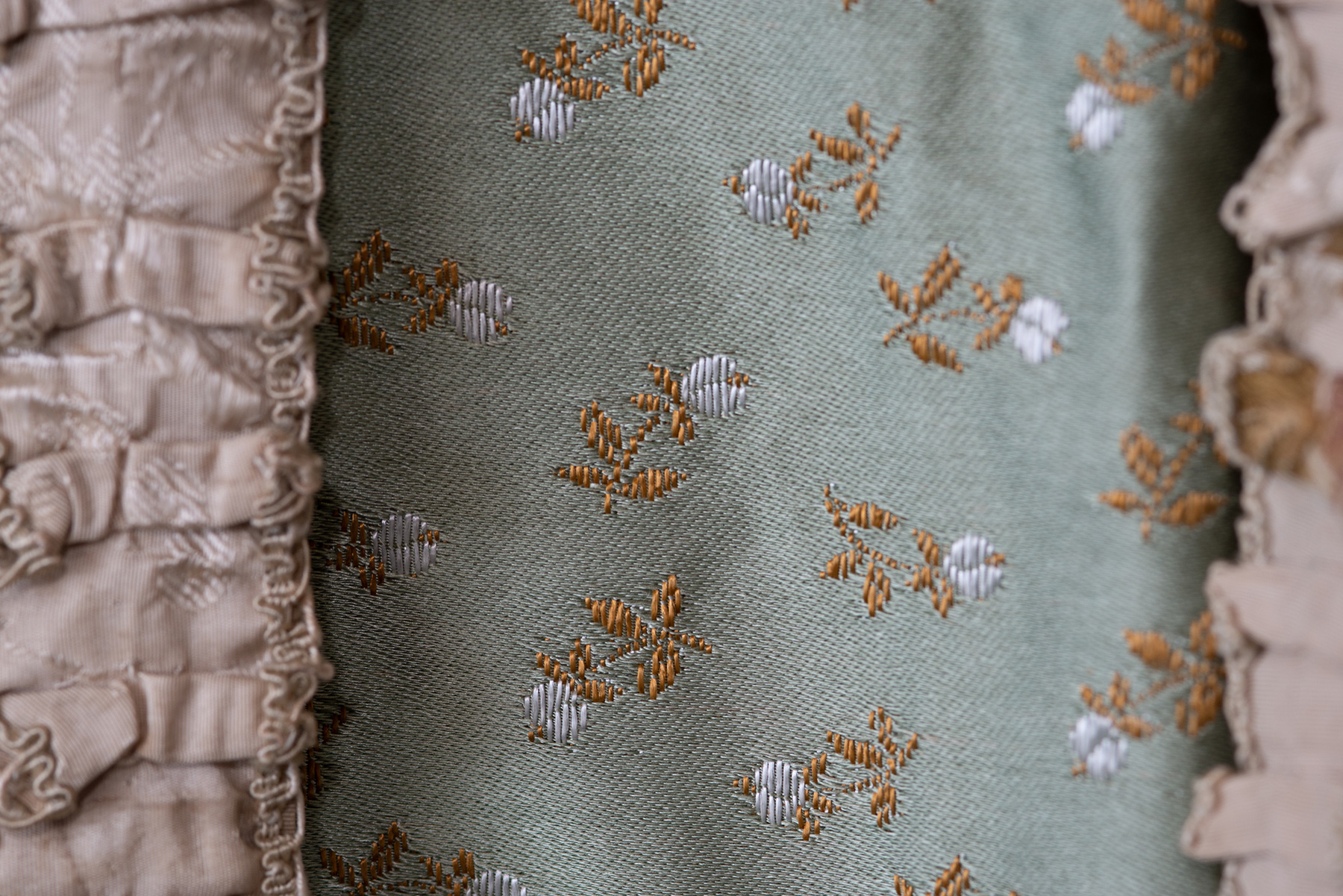 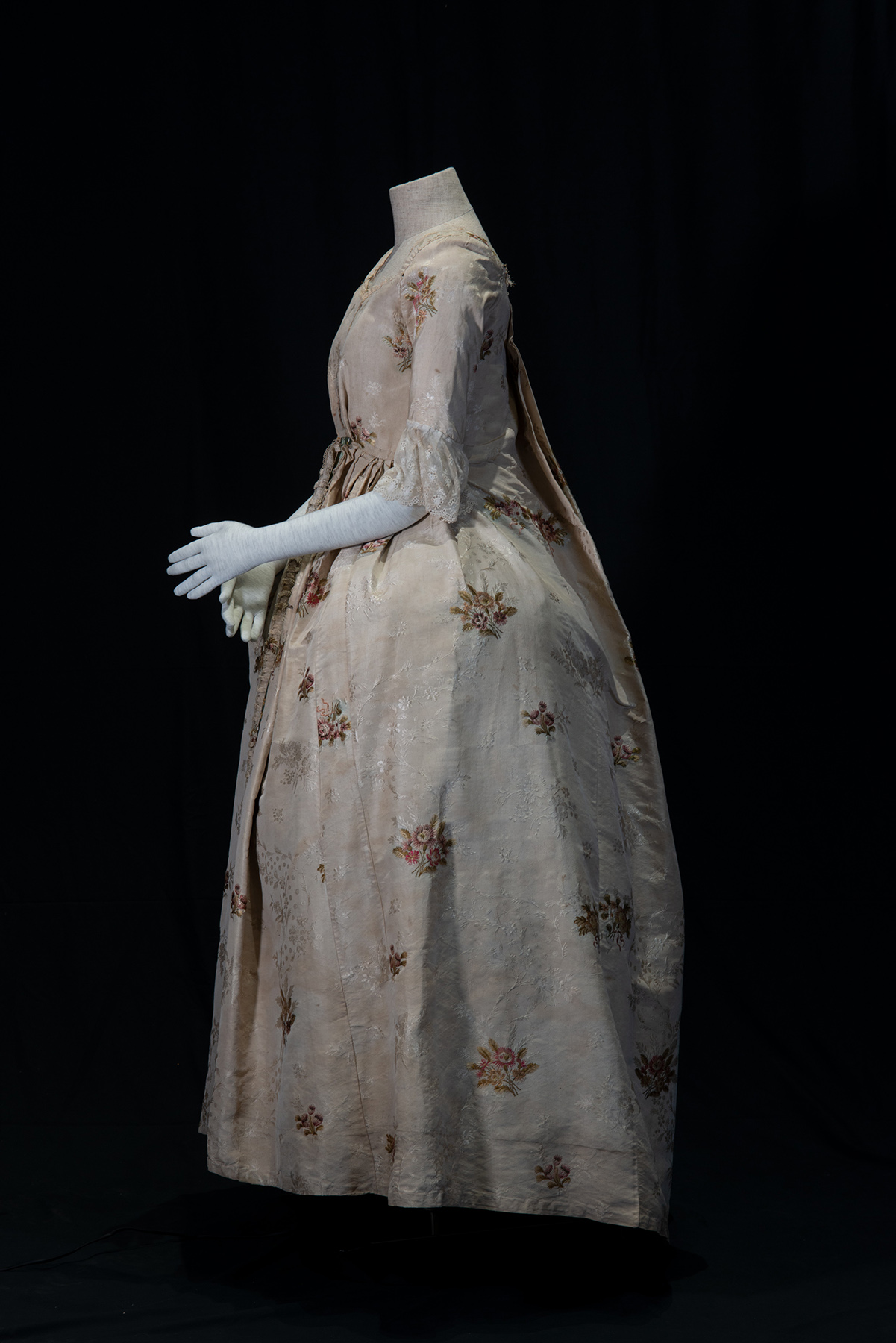 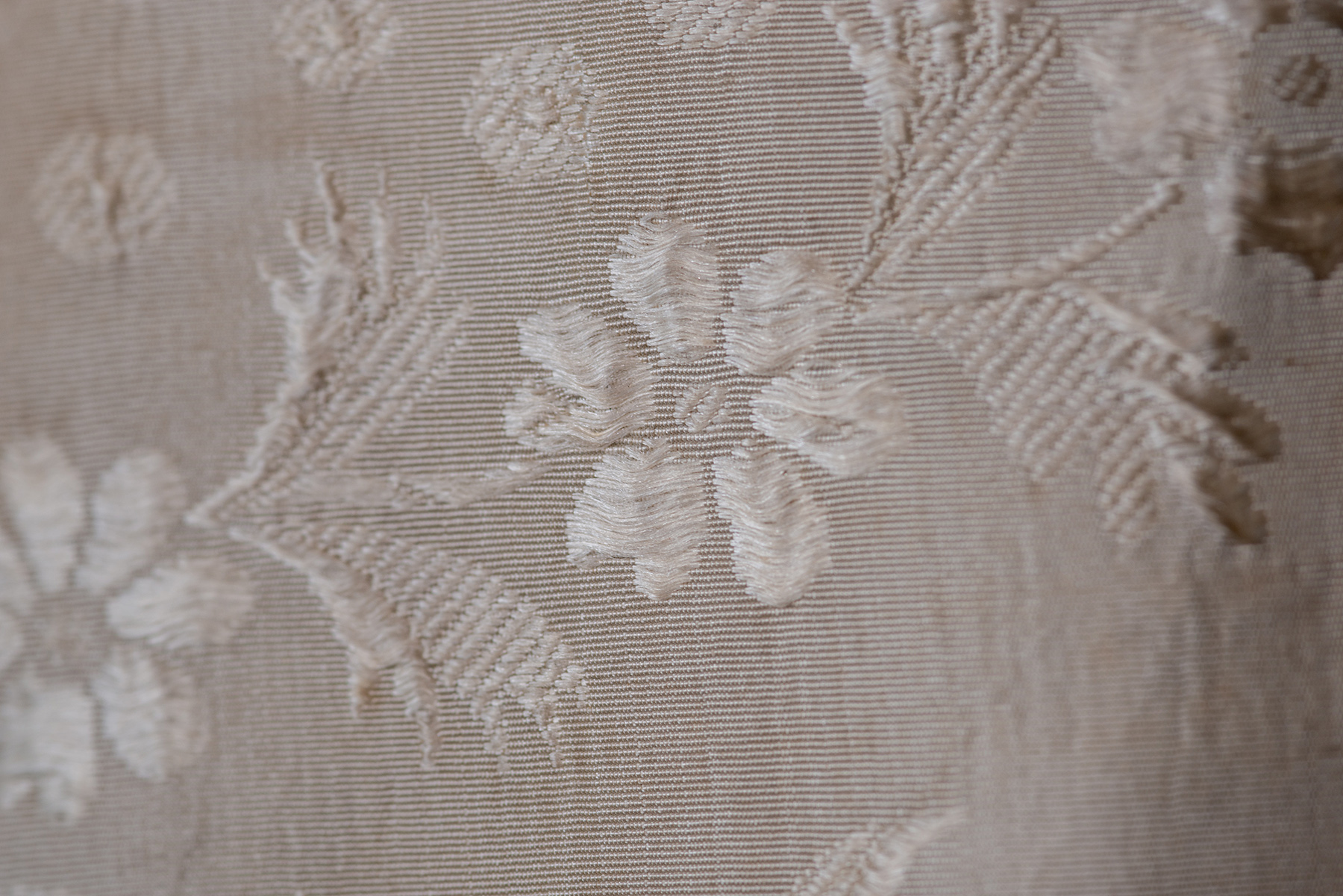 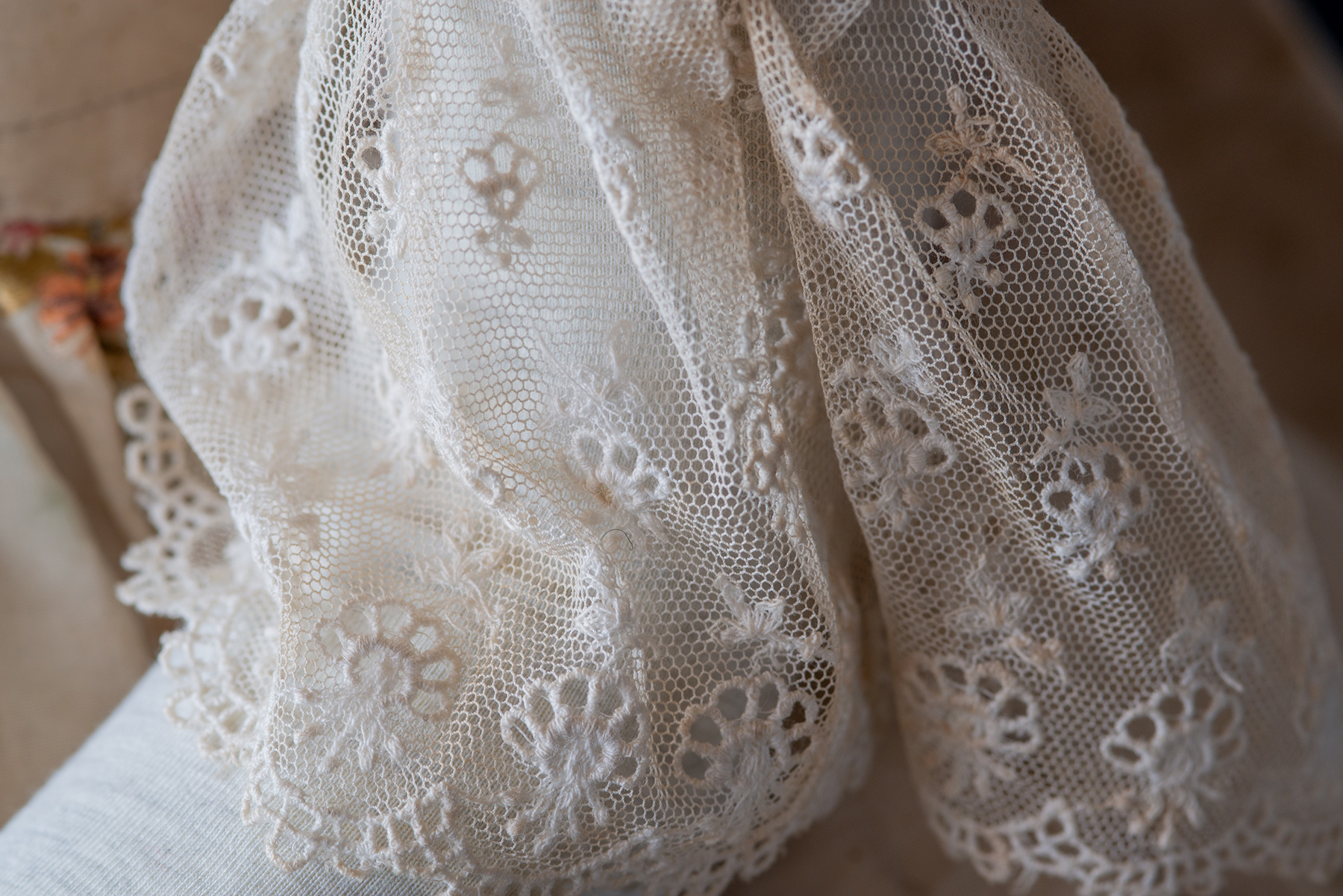 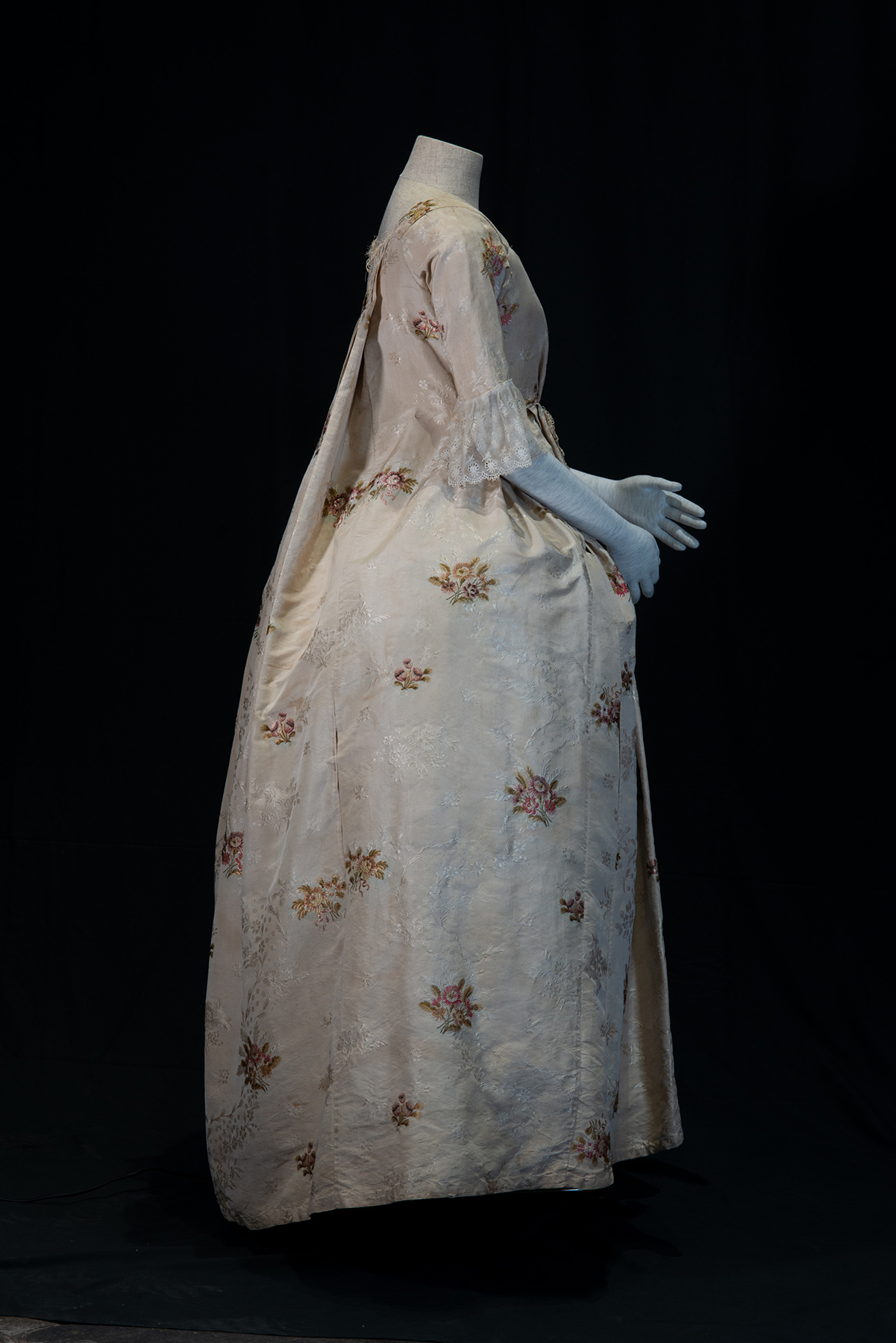 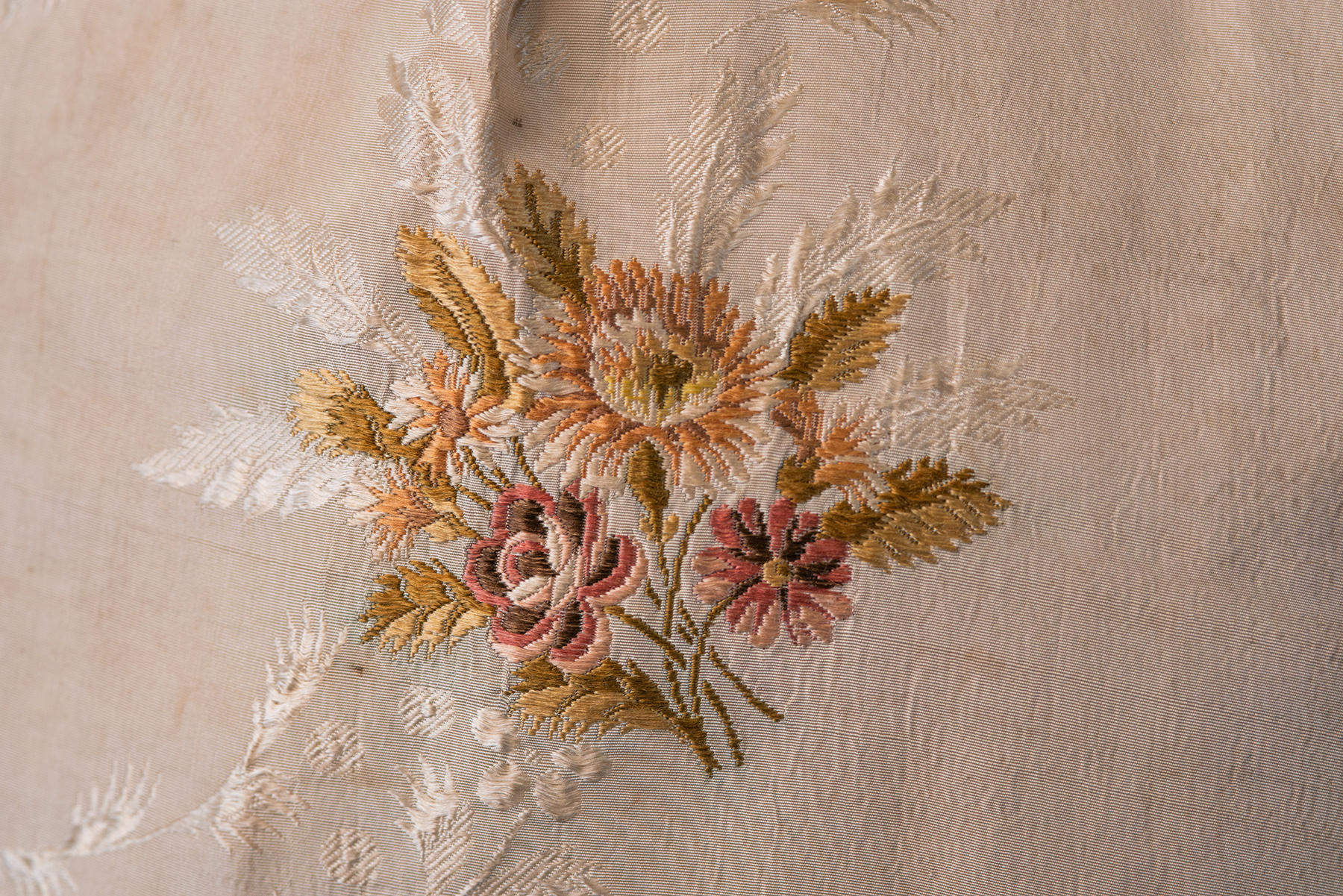 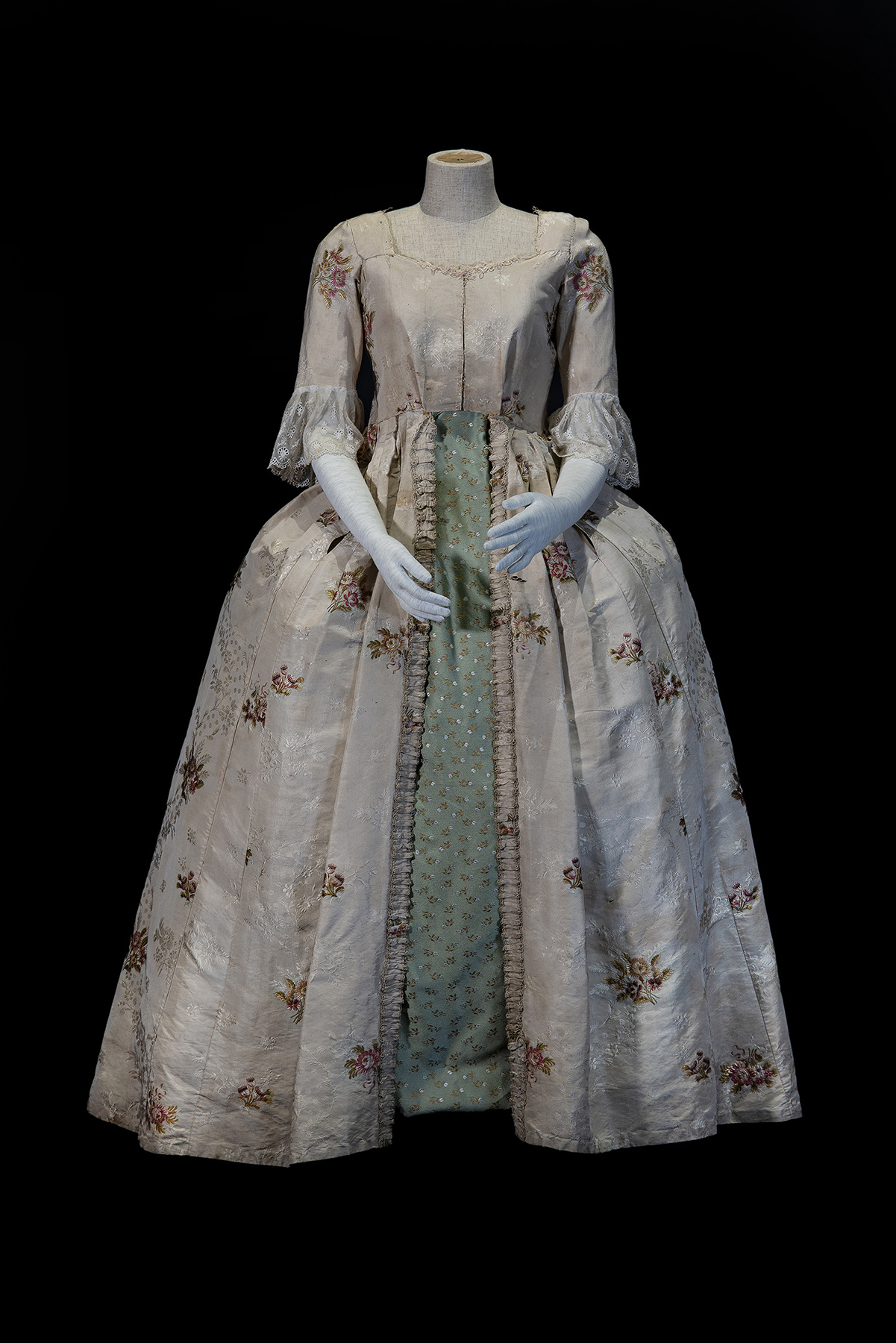 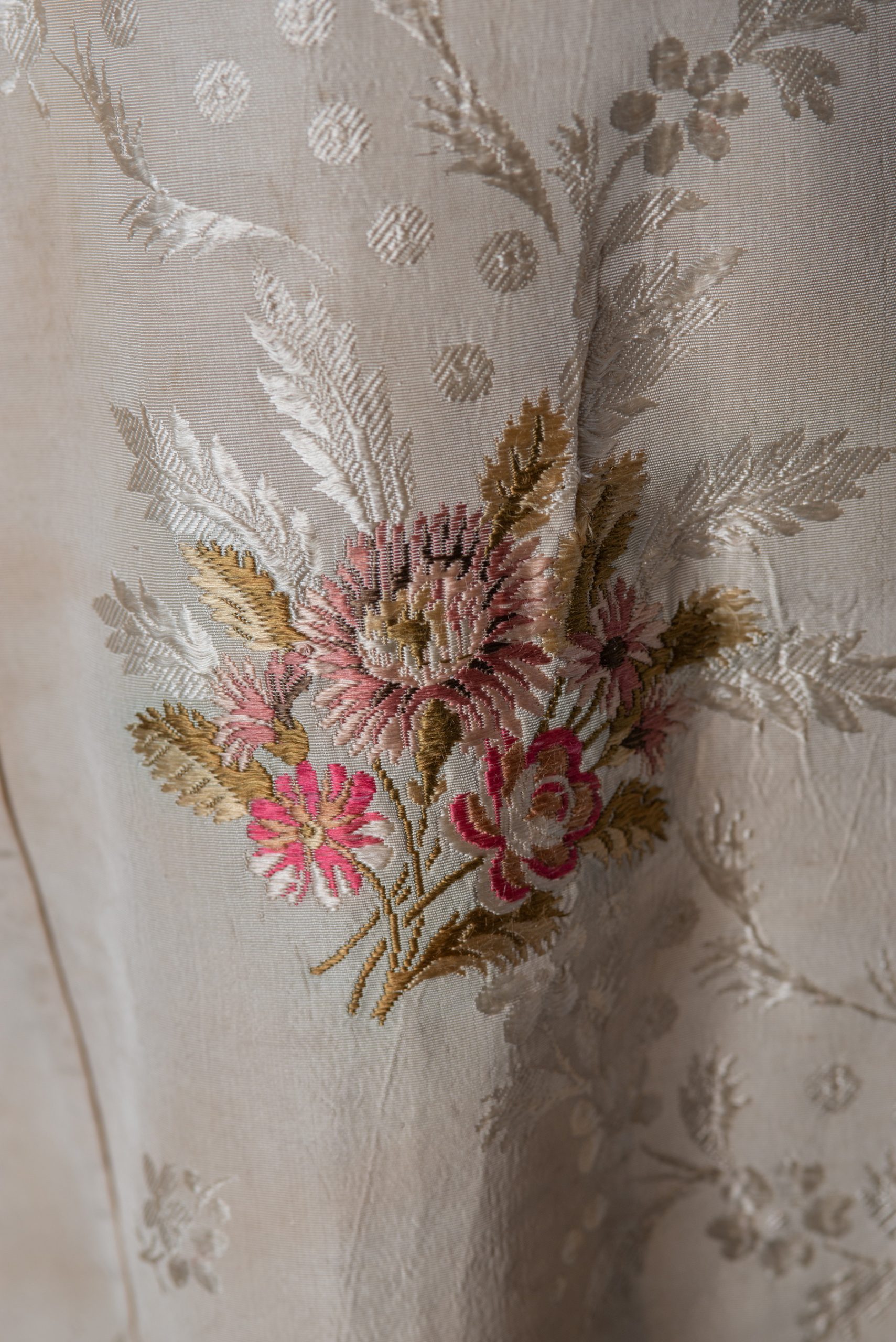 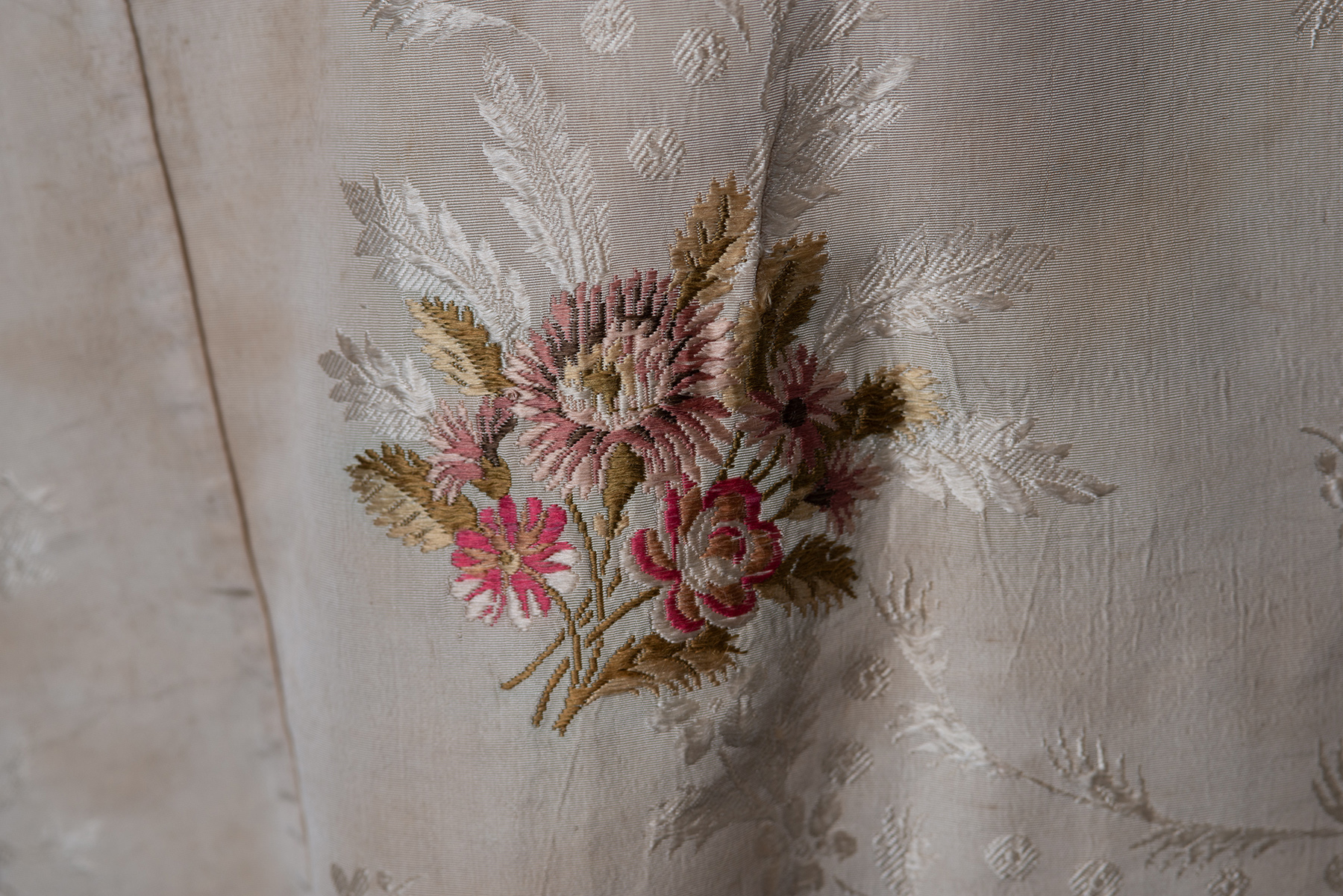 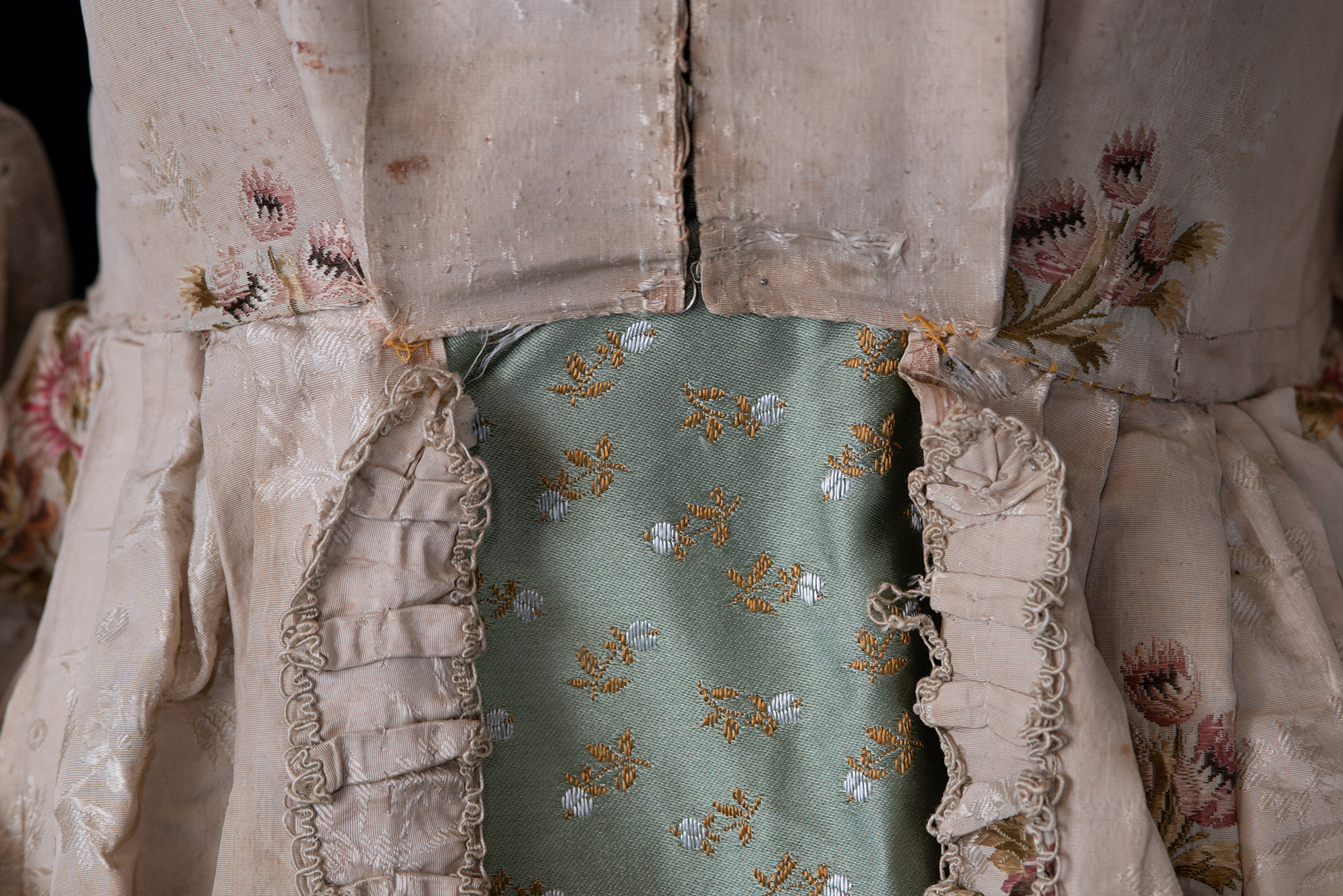 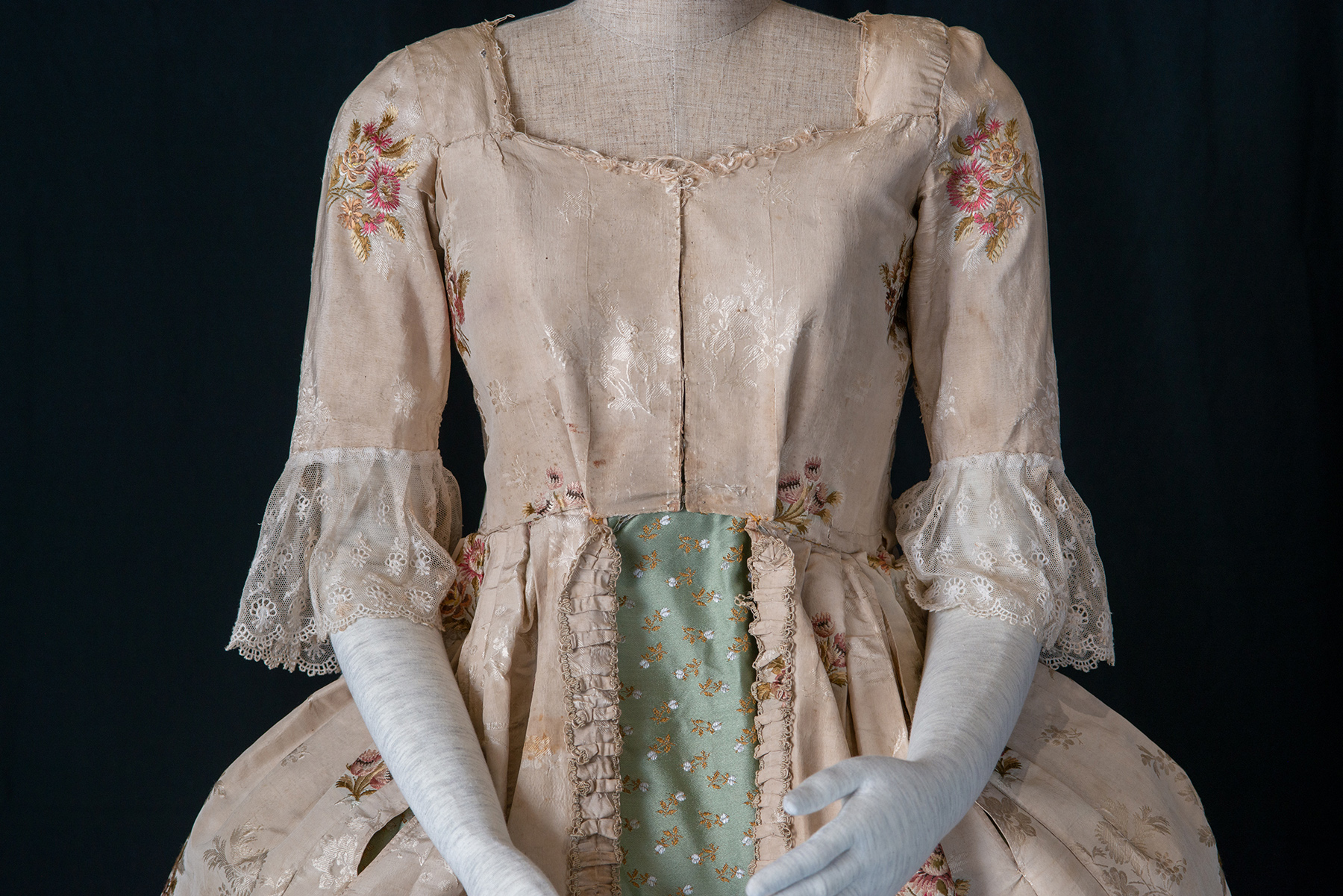 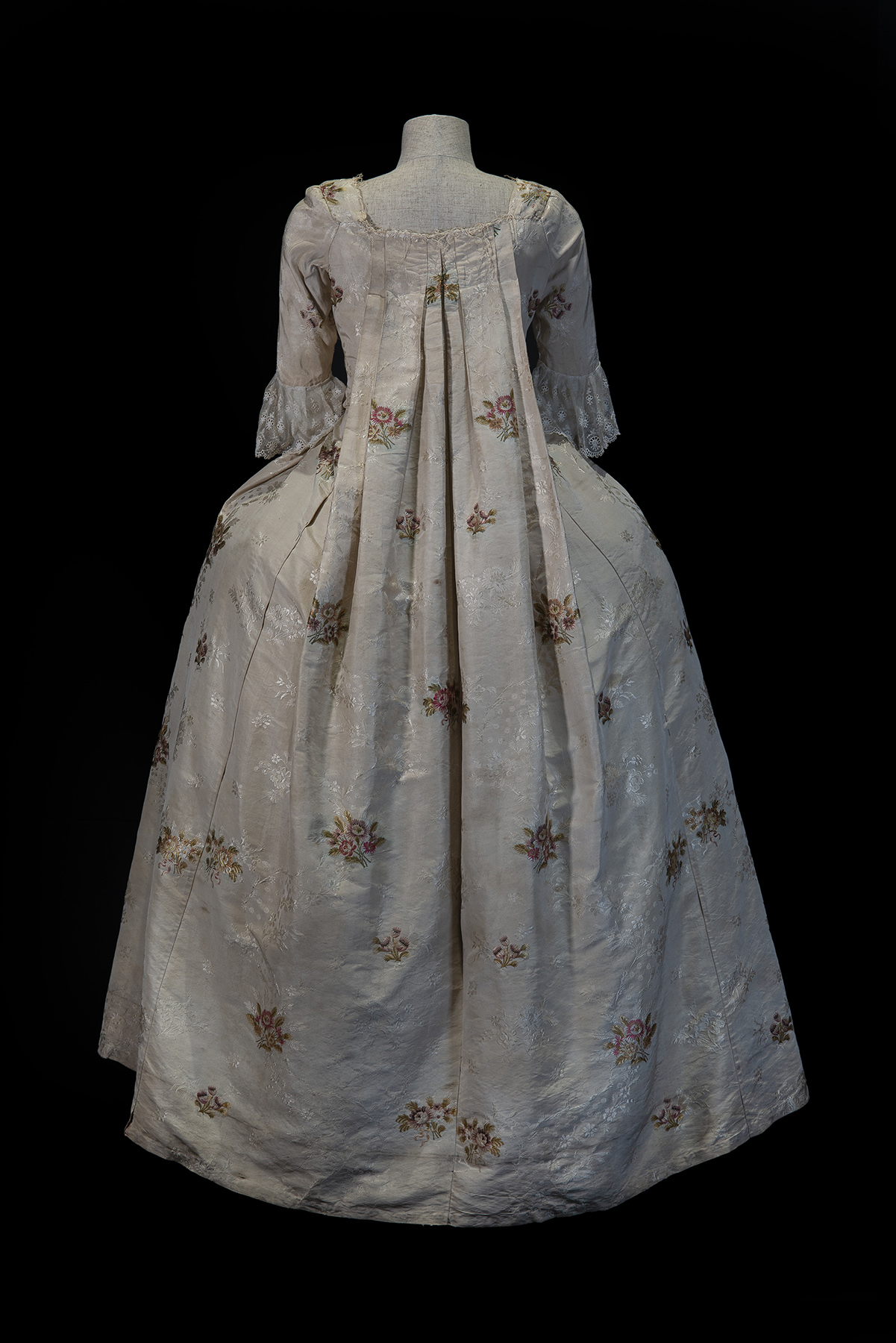 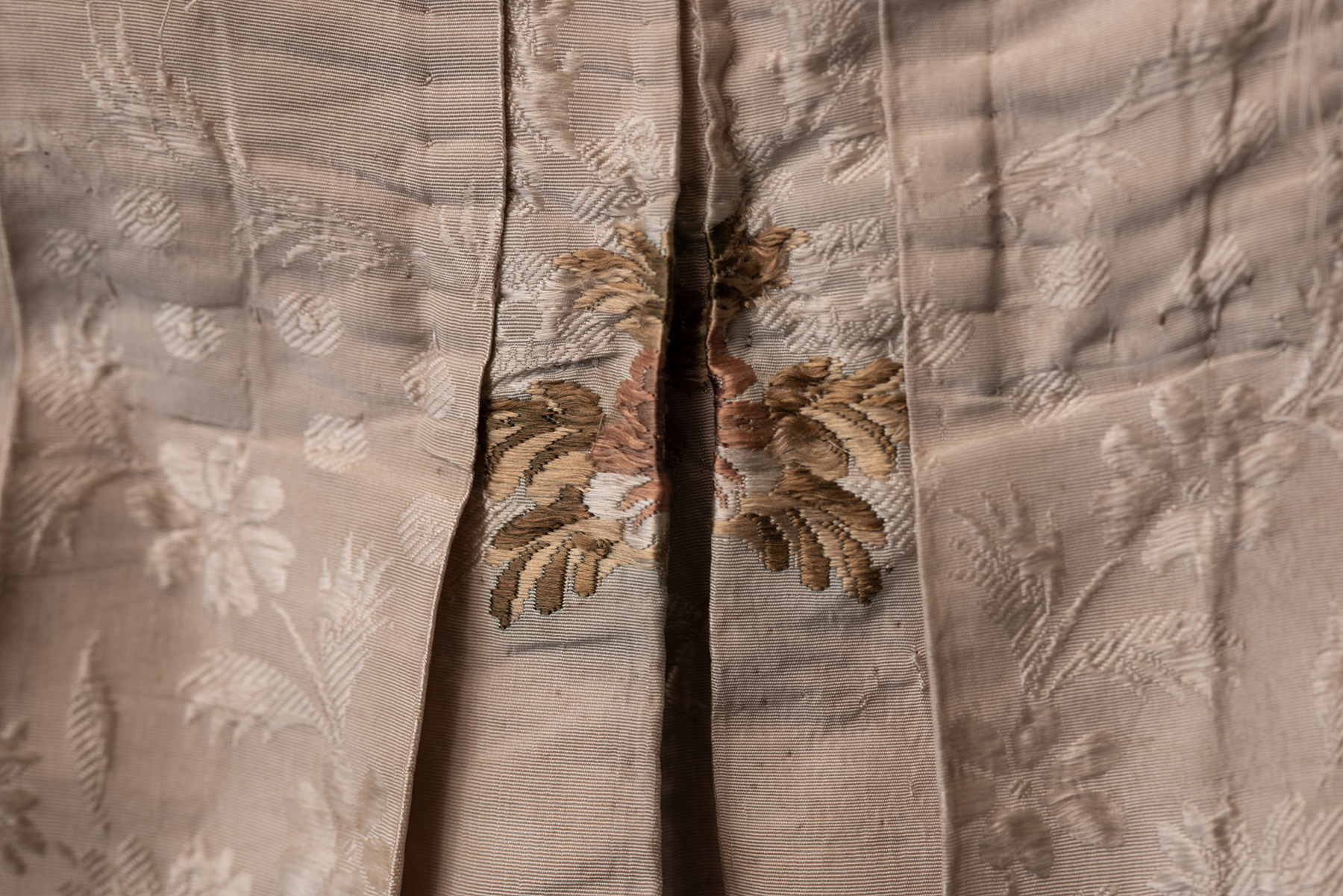 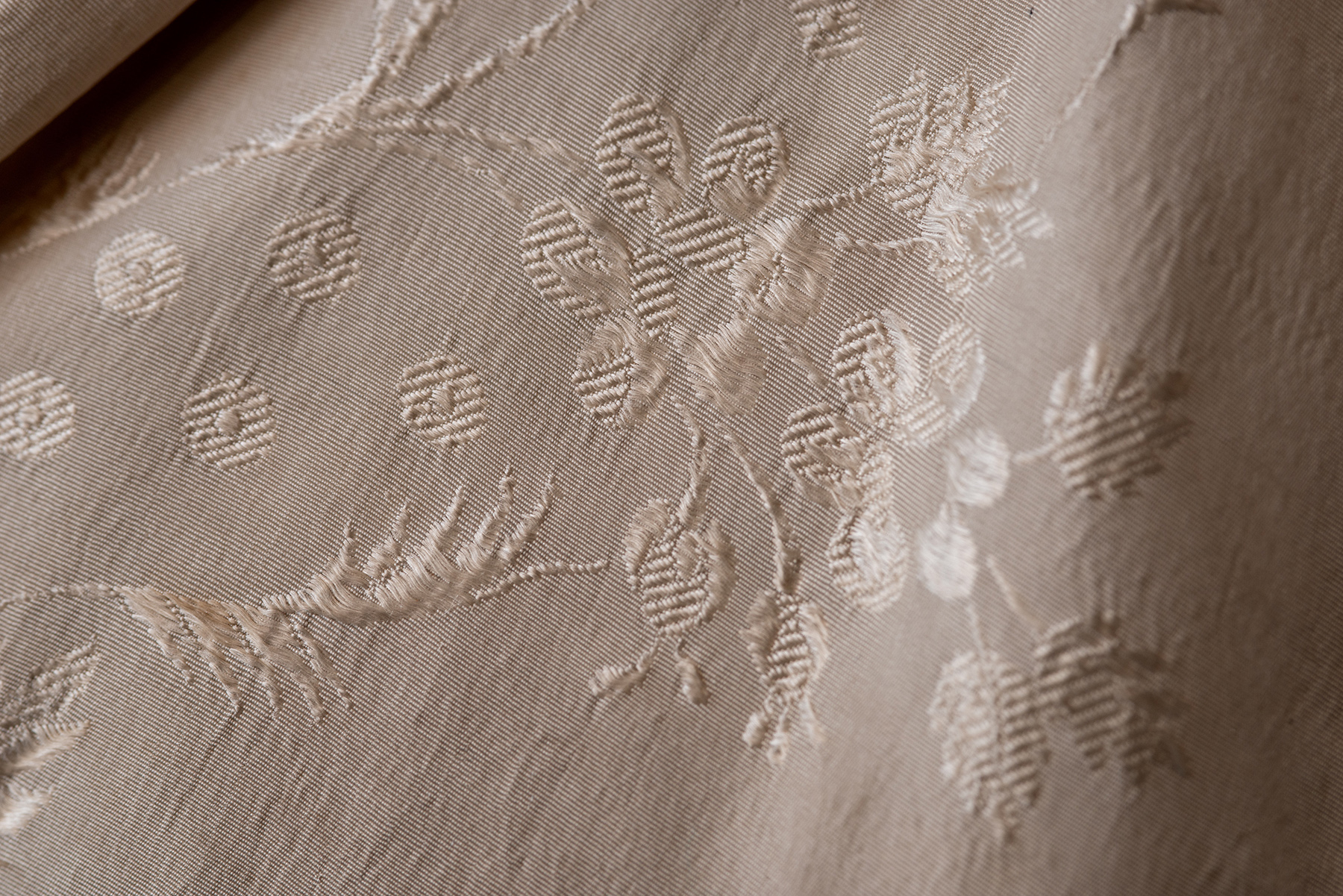 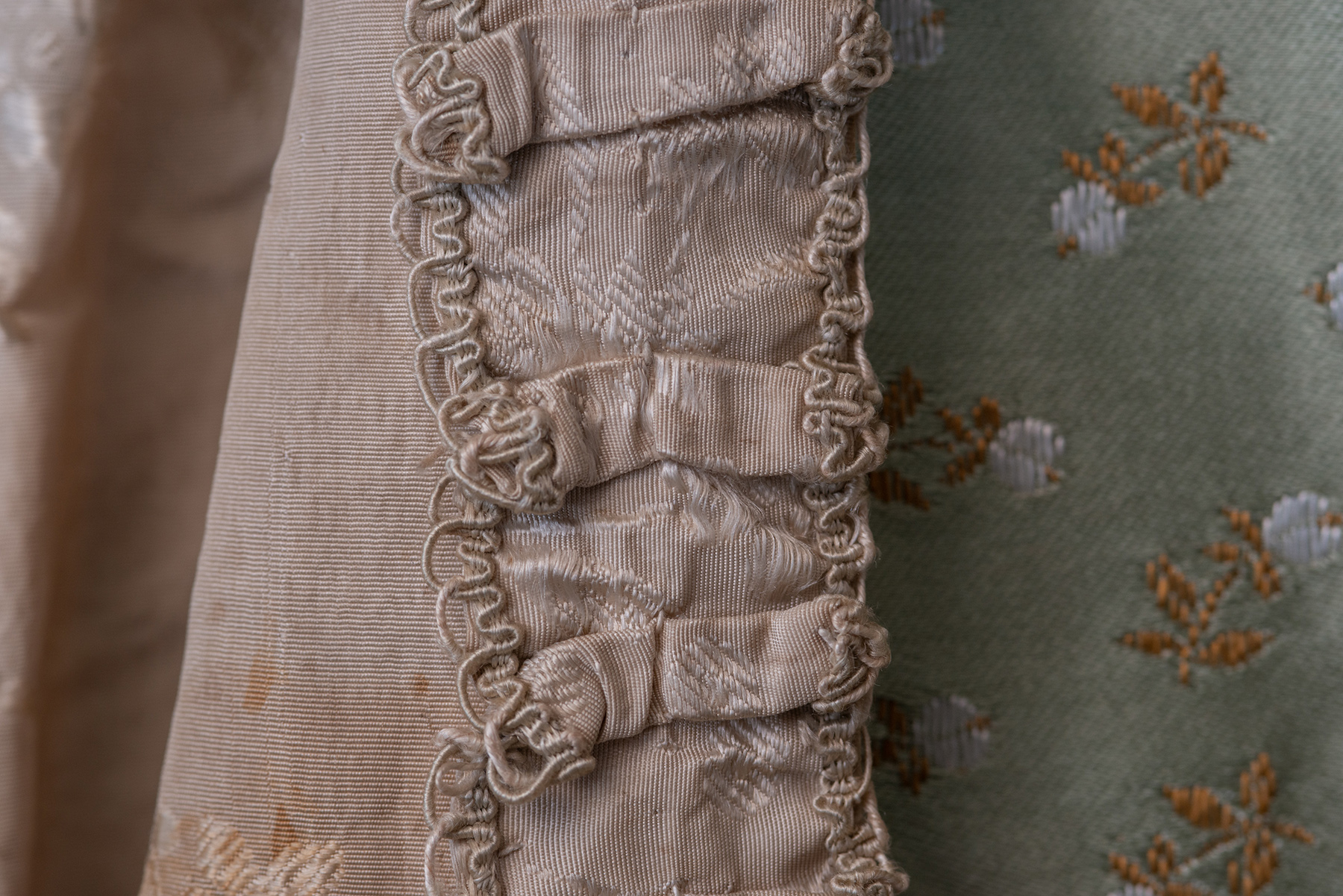 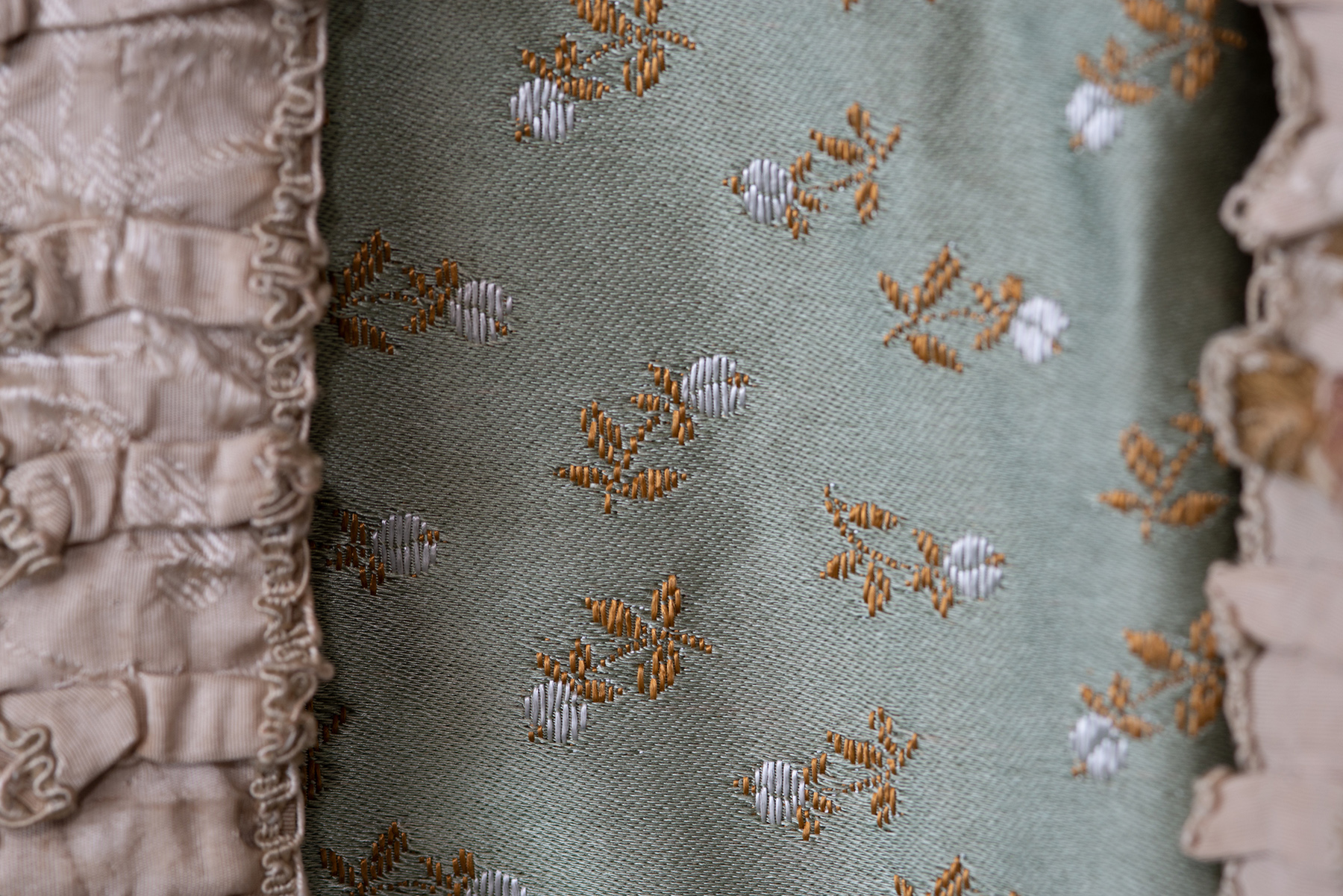 This beautiful dress dates to the 1740s and was made with brocaded silk woven in Spitalfields, London. It supposedly belonged originally to an upper-class Jacobite supporter and was passed down through the generations of a local family. Latterly, the family’s children enjoyed dressing up in it. Before the dress was donated to the museum in 1971, it was put through a washing machine but luckily it survived.

This style of dress went by a variety of names. In France it was known as a ‘robe à la française’ but in England and Scotland it was most commonly referred to as a ‘saque (back)’. The full-length flowing pleats down the back of the dress are the hallmark of this style. The quality of the silk indicates that this dress would have been extremely expensive when new.

We know very little about who wore this dress and when, but its changing seamlines show that it was valued as a fashionable item of clothing for nearly one hundred years. Although the exquisite silk fabric is sadly showing its age, the imprints remain of its many lives as a valuable and desirable item of fashion.

Dressmakers used skilled stitching techniques to make it easy to update, alter or even entirely re-make garments to fit changing fashion styles. Most dresses of this period experienced changes of one kind or another and this dress was no exception. Although it appears that the gorgeous back pleats have not been altered, the front bodice has seen several dramatic re-incarnations. The bodice was originally open in the front with the edges folded back into ‘robings’. A decorated triangular panel called a ‘stomacher’ would have been worn over the torso to fill in the gap. In the 1740s the fabric was the main attraction but by the 1760s, extravagant fringe became the height of fashion. The gown acquired box-pleated trim edged with intricate loops of ‘passementerie’ along its edges. Remnants of this have survived and can be seen down the front of the skirts.

The dress was first significantly re-made in the late 1770s or early 1780s. The front ‘robings’ were dismantled and the excess fabric unfolded to meet in the centre front. New straps were stitched in over the shoulders with fabric possibly taken from a matching petticoat which has not survived. At some point between 1790 and 1810 the entire bodice front was shortened to reflect the fashion for a higher waistline. The skirt’s pleats were reworked, and tucks were applied to bodice to suit a slimmer figure. Shifting fashions meant the dress experience a wide variety of styling, with ruffles and lace being added and removed at both elbows and neckline.

In the 1800s people were less inclined to remodel gowns in the same way. Gowns like this one were cast aside, tucked into trunks or attics only to be re-discovered later and added to the children’s dressing-up box.

The museum hopes one day to identify some of the women who owned and wore this dress. Meanwhile, we can read the dress itself to get glimpses into its past. Its expensive fabric and fashionable style are a testament to the wealth, status and tastes of these as-yet-nameless women. 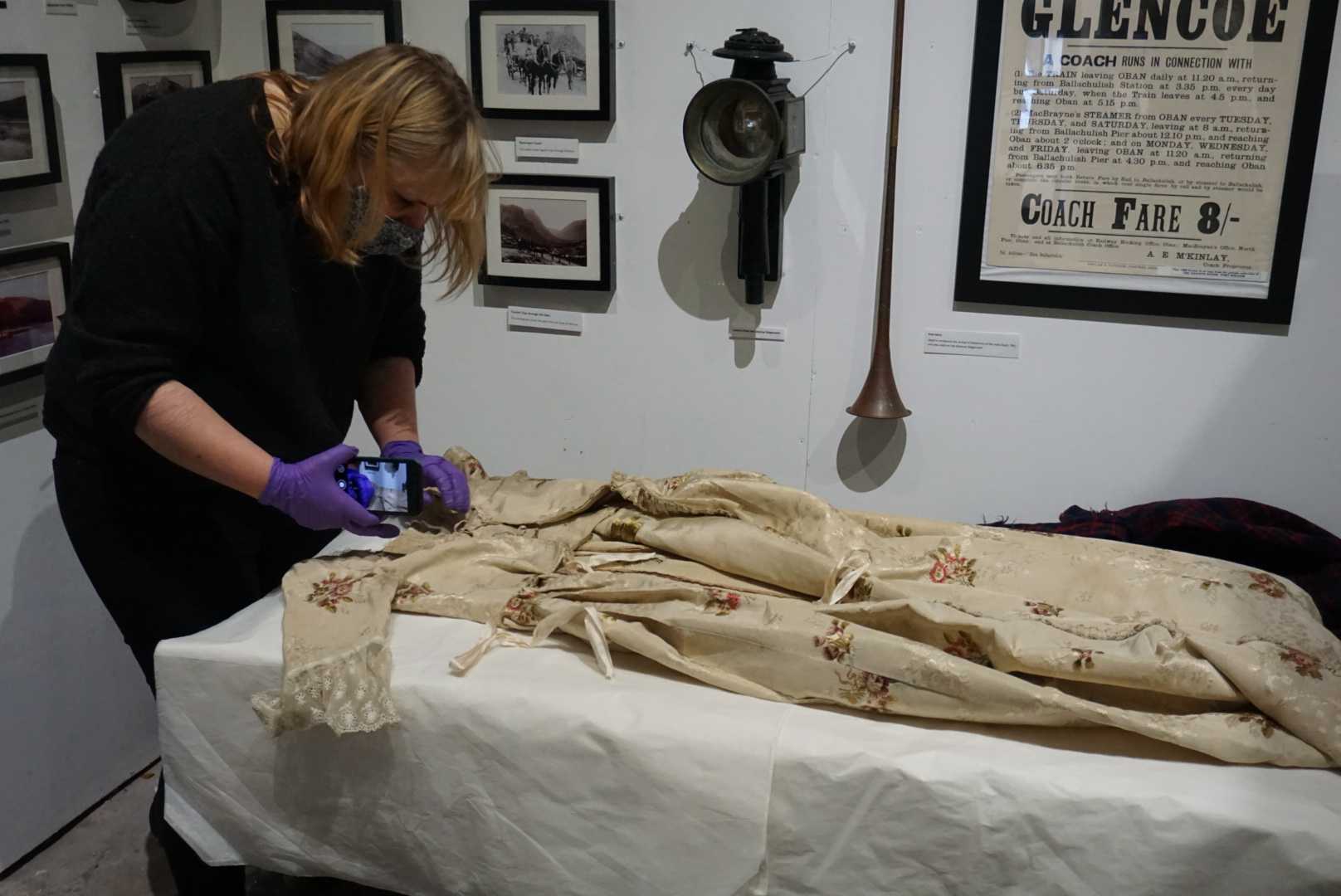 Set within traditional 18th century heather-thatched cottages, Glencoe Folk Museum holds an eclectic array of objects celebrating local heritage and providing an insight into the history of the area and its people.

Help GLENCOE FOLK MUSEUM work through the pandemic closures by adopting an object.